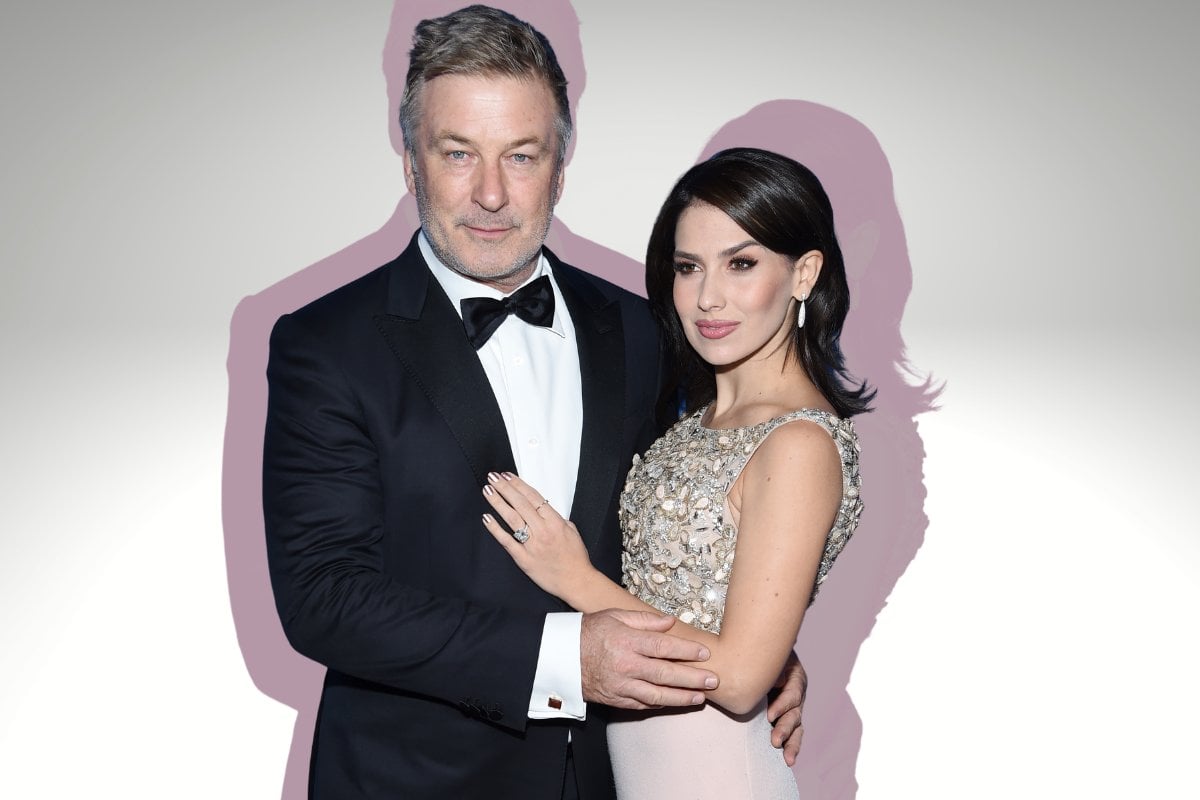 Hilaria Baldwin, wife of Alec Baldwin and mother to five Baldwin babies, took to Instagram to share a picture of her holding her newborn, Eduardo.

As you can see from the picture below, Hilaria is wearing very little beyond a black lingerie set.

The comedian, who recently had her first child named Gene, shared Hilaria's picture of her and Eduardo with the caption: "Gene and I wanted to wish everyone a happy holiday season. Enjoy it with whatever family members are talking to you this year."

The post has since been deleted, but not before celebrities such as Alec Baldwin’s eldest daughter from a previous marriage commented, "Why did I comment on this as if this were Hilaria's account!!" noted Ireland Baldwin. "Lol miss you guys!!"

It all seemed like light-hearted fun, but since the joke-post went viral, Hilaria said she's received a fair amount of body shaming.

She took to social media (AKA the origin spot of all this drama) to share a lengthy IGTV statement about her post, Amy’s post and the response the two posts received in the comments section.

“I love jokes, I think it was very funny. I actually don’t understand it really well, the joke. But some people tried to explain it to me, so I kind of get it. But I love jokes,” Hilaria says.

“My only concern with it is that it started to spiral out of control… where we’re getting into a place of body shaming. Sometimes we put down people’s shapes. There’s talk that ‘mums don’t look like this,’ well some mums do. This mum does. I am included in the inclusivity. Body inclusivity means including everyone, of all shapes and sizes.”

However, there’s definitely no bad blood between her and Amy as the two have continued their Instagram back-and-forth.

Amy shared this post on Christmas Day, stealing another one of Hilaria’s family pics:

Before Hilaria came back with this photoshopped post, saying:

“Looking forward to much positivity in 2021-like Alec carrying our next child... thank you @amyschumer for being a part of our pregnancy announcement and convincing me that after 5 children, I’ve done enough. Alec as a pregnant man is quite high maintenance, no surprise there. It’s ok, Amy and I’ve got all your cravings covered, honey.”

But all while this was happening on Instagram, Twitter made a weird and wonderful discovery about Hilaria Baldwin. A discovery that sometimes she 'pretends' to be Spanish.

In a hefty thread, Twitter user @lenibriscoe has documented Hilaria Baldwin’s “decade long grift where she impersonates a Spanish person,” and the videos are… telling.

Where did your accent go Hmm pic.twitter.com/U9DLc5VnSg

If you scroll back up in this article to her recent IGTV video, you’ll note that the way Hilaria speaks is vastly different.

Obviously, this is all a smidge confusing, but after hunting around for some definitive answers online we were only able to find seriously contradicting evidence lying around the internet. Many claim Hilaria is from Massachusetts, USA, but her IMDb page says she was actually born in Mallorca, Spain.

@lenibriscoe also found a video clip of Hilaria’s mother (supposedly) talking at a conference with a very American-sounding accent.

She claims to have a Spanish mother. This is not true. This is her mother talking about growing up in Longmeadow MA. pic.twitter.com/mEiSjTMkpV

And further Twitter detectives found that her mother graduated from Boston University medical school in 1986 and then had a 20-year career in Massachusetts. Meaning that Hilaria, who was born in 1984, would have grown up in the US.

Hilaria/Hilary was born in 1984 - mom would have been in medical school IN BOSTON pic.twitter.com/J7fIkBdTUf

Look, honestly, we have no flipping clue what’s really going on here, but it seems apt to round out a year of mayhem with another strange story, right?

Hilaria (Hilary) Baldwin is Alec Baldwin’s current wife, and her pretending a Spanish upbringing is just the latest weird 2020 thing.

Following the viral nature of this story surrounding the mum of five, Hilaria decided it would be best to clear the air with an IGTV, walking her followers through her family history.

Here’s what she had to say.

“I’m really lucky that I grew up speaking two languages and I’m trying to raise my kids so that they speak two languages.

“Lots of people have been asking about how I speak. I am that person who if I have been speaking a lot of Spanish then I tend to mix them and if I’ve been speaking a lot of English then I mix up my Spanish. It’s one of those things that I’ve always been a bit insecure about. When I get nervous or upset then I tend to mix the two.

“I try to speak more clearly in each language. That is something I should try to do. But sometimes I mess it up. It’s not something I’m ‘playing’ at, so I want that to be very, very, very clear.

“Then a handful of years before I met Alec, I decided to consolidate the two because there were so many documents and I had so many different things. Even things like going to pick up a prescription I’d be like, ‘I don’t know what you have on file’. So I consolidated and I identify more with ‘Hilaria’ because that’s what my family calls me and one of things I love is that ‘Hilaria’ means ‘happy’.

Listen to Mamamia Out Loud where Mia, Holly and Jessie recap the year that was. Post continues after podcast.

“Ultimately it boils down to this: This is a country with a lot of different cultures, which means we can be different parts of ourselves with different people. And I’m somebody who feels really lucky that grew up with two cultures, I grew up speaking two languages. Did I always do it well? You know, through your awkward years trying to be more ‘this’ or be more ‘that’.

“I’ve seen some things saying, ‘she’s a white girl,’ and yes, I am a white girl. Let’s be frank here that Europe, you know, has a lot of white people in there. My family is white. Ethnically I am a mix of many, many things. Culturally, I grew up with the two cultures. So it’s really as simple as that.

“The reason I want to take this so seriously is because we’re having cultural conversations a little bit more and more and I just want to be very, very clear.”

Hilaria also posted some throwback pictures to her Instagram Stories of her spending time in Spain as a teenager. 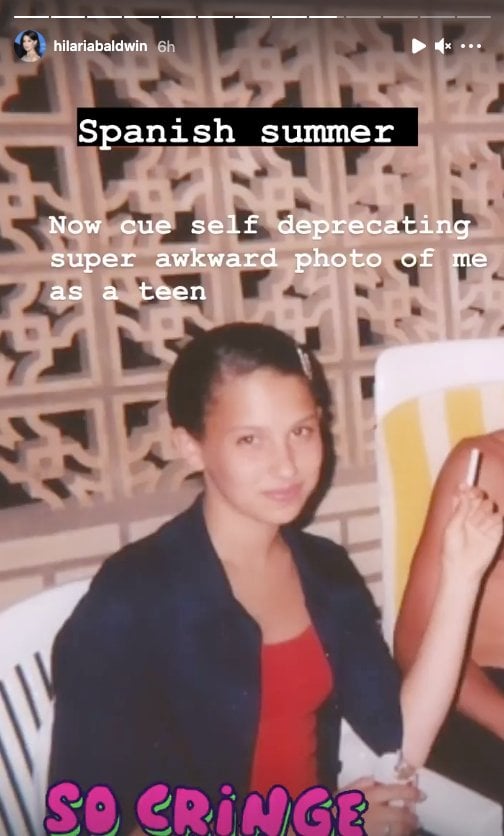 She continued: “People want to label you as something else. But I’m born in Boston. That was literally the first thing that I told my husband. And I’m a different type of ‘Bostonnian’, but that’s who I am and you kinda can’t change your background - and nor do I want to. I’m really proud of who I am, and all my experiences. Sure, yeah, I’ve had my insecurities, but I’m learning that what makes me unique is also of value to myself and I can embrace it.”

Hilaria signed off the video with this poignant statement: “This is who I am, and my life story - and it might not fit into your cookie cutter, or your label, but it’s my weird mix of who I am.”

Following sharing the video, she took to her Instagram Story again to say she would be signing off from social media for a while.

“I’ve said my peace. I’m so tired. I’m going to go back to my family because I have been not a very good mommy, spending a lot of time focusing on this and i just want to be left alone. So, I love you, and I’m going to be signing off for a long time.”

Since then she’s shared a picture of her eldest children meditating before bed, so we know that she has been able to spend some quality time with her family.

Reply
Upvote
A lot is being made elsewhere of the topic that shouldn't someone who feels transracial be accepted for who they are?
M
mamamia-user-482898552 2 years ago

Reply
Upvote
@salemsaberhagen That's taking the "you are whoever you identify to be" argument a bit too far. That basically leaves the door open for privileged white people to play the race card when it suits them, with the option of handing it back at will if and when it becomes an impediment or inconvenient to them. In short, all benefit to the privileged majority, and absolutely no gain for the minorities they exploit.
C
cat 2 years ago

Reply
Upvote
@salemsaberhagen if she was saying that she felt more herself when using Spanish then that could almost be a relevant conversation, though obviously ‘spanish’ is not a race. But she’s not saying anything that’s even close to that coherent.
K
kelloneill 2 years ago

Reply
Upvote
"I love jokes, I think it was very funny. I actually don’t understand it really well, the joke. But some people tried to explain it to me, so I kind of get it. But I love jokes,” Hilaria says.
She loves jokes - especially those that she doesn't 'get'. Bleedin' hell.
M
mamamia-user-482898552 2 years ago

Reply
Upvote
1 upvotes
@kelloneill Maybe if someone translated the joke into Spanish, she might understand? ;)
R
random dude 2 years ago