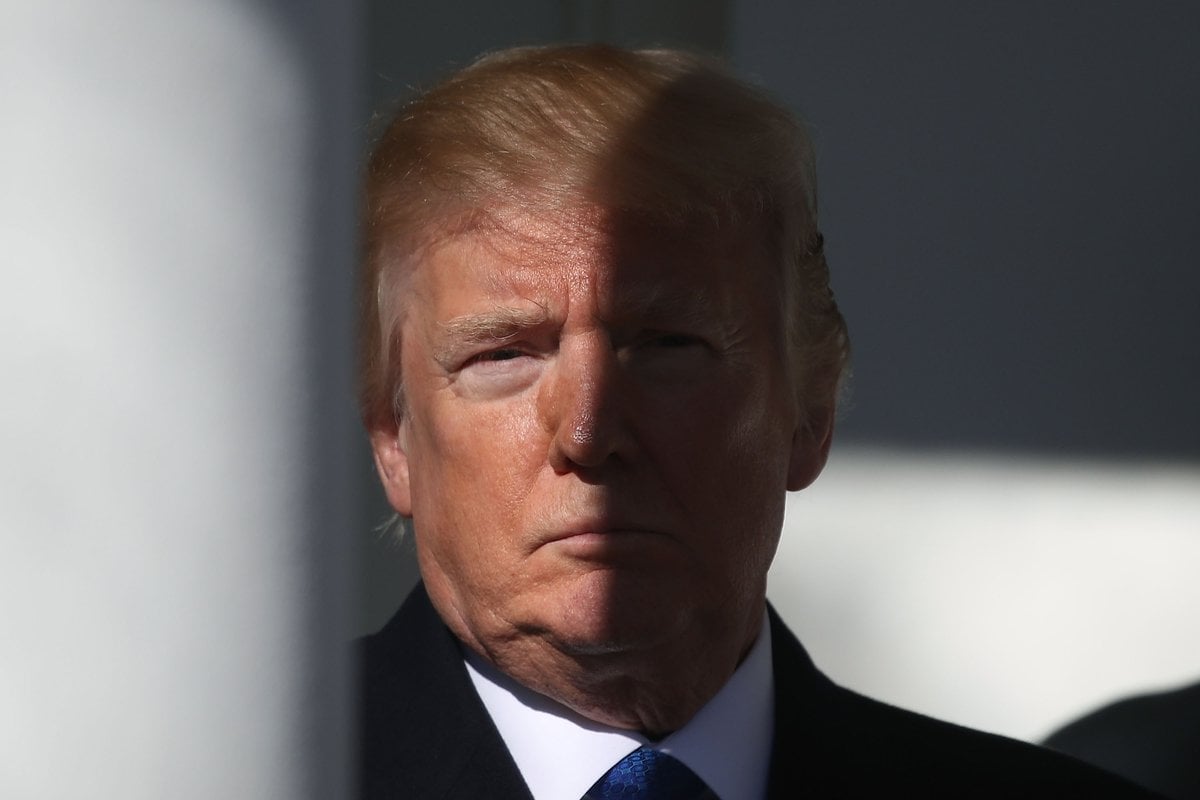 In the former US president's second impeachment trial in a year, the US Senate has acquitted Donald Trump for inciting a riot on the US Capitol on January 6, 2021.

On Saturday morning, local time, the US Senate voted to convict 57-43 - ten votes short of the required two-thirds needed to find Trump guilty.

Here are four important takeaways from the historic impeachment trial.

This was the most bipartisan impeachment trial in US history.

Despite the acquittal, this impeachment trial garnered the most bipartisan support for conviction in US history.

Of the 50 republicans in the Senate, seven of them broke party ranks to vote to convict Trump.

Former Republican presidential candidate Mitt Romney said Trump "incited the insurrection against Congress by using the power of his office to summon his supporters to Washington".

“He did this despite the obvious and well-known threats of violence that day. President Trump also violated his oath of office by failing to protect the Capitol, the vice president and others in the Capitol. Each and every one of these conclusions compels me to support conviction," Romney said in a public statement.

"It is a sad commentary on our times that one political party in America is given a free pass to denigrate the rule of law, defame law enforcement, cheer mobs, excuse rioters, and transform justice into a tool of political vengeance, and persecute, blacklist, cancel and suppress all people and viewpoints with whom or which they disagree," Trump said.

Trump further condemned the Democratic party, adding the impeachment was "yet another phase of the greatest witch hunt in the history of our country".

The 74-year-old did not address the Capitol riot specifically or comment on the role he played in the insurrection. Instead, he said his movement to Make America Great Again "has only just began". 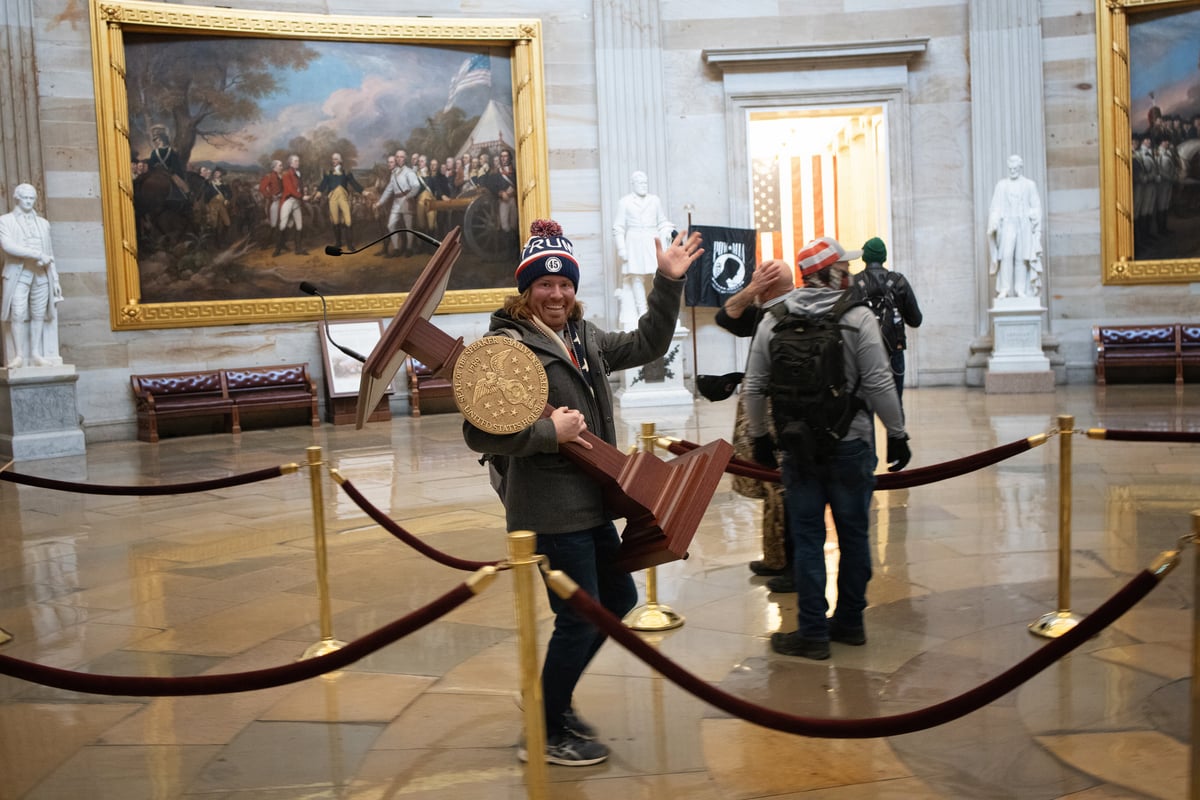 A pro-Trump protester carries the lectern of U.S. Speaker of the House Nancy Pelosi through the Roturnda of the U.S. Capitol Building during the riot on January 6, 2021. Image: Getty.

Trump could still run for president in 2024.

Yes, the Senate's acquittal means Donald Trump can still run for president in 2024 - a move that has been hinted at, but never confirmed, by the former president.

Trump's statement on Saturday vaguely mentioned he had announcements to make soon.

“Our historic, patriotic and beautiful movement to Make America Great Again has only just begun," the former president said. "In the months ahead I have much to share with you, and I look forward to continuing our incredible journey together to achieve American greatness for all of our people. There has never been anything like it!"

According to a POLITICO/Morning Consult poll, Trump remains a popular prospective candidate, with 40 per cent of Republicans and GOP-leaning independents saying they would vote for Trump if he ran for the 2024 Republican primary. A pro-Trump group confronts U.S. Capitol police outside the Senate chamber of the U.S. Capitol Building on January 6, 2021. Image: Getty.

Senate Minority Leader Mitch McConnell said he believes Trump is guilty of inciting an insurrection on the Capitol, but nevertheless voted to acquit the former president.

"There's no question — none — that President Trump is practically and morally responsible for provoking the events of the day. No question about it. The people who stormed this building believed they were acting on the wishes and instructions of their President," McConnell said.

So why did he not vote to convict? Because he believes the impeachment trial was unconstitutional due to the fact Trump is no longer in office.

"We have no power to convict and disqualify a former office holder who is now a private citizen," McConnell explained.

"Donald Trump's no longer the president. Likewise, the provision states that officers subject to impeachment and conviction shall be removed from office if convicted," he continued.

McConnell left open the possibility of Trump being held liable by the criminal justice system.

C
caz gibson a year ago

Reply
Upvote
2 upvotes
For those seeking to prevent Trump from ever again seeking to be President - there's possibly a reason to be cheerful.
The 14th Amendment - 3rd section.
A bill can be passed preventing Trump from running again as it refers to the fact that anyone who contributes to an insurrection is invalid.
This time it won't rely on a number of Republican votes.
The prosecution needed this trial to expose the damning video evidence to American voters and viewers worldwide.
This wanna-be dictator should have read his country's constitution.
G
gu3st a year ago

Reply
Upvote
6 upvotes
Republican senators had a chance to close the lid on Pandora's box, but in their selfish cowardice, failed, in full, to perform that service for their people.

An ignominious time for Republicans, marking a significant deviation from America's proud devotion to democracy.

Empires can founder. This feels a movement closer to that fate.
Can you imagine the disillusionment you'd now feel as an American voter, already deeply jaded by the distortions wrought by donor money on US politics?
Trump's 'radiant' future?

Mark this day gravely and well,
As the land of the free's stepped closer to hell.
S
snorks a year ago

Reply
Upvote
3 upvotes
@gu3st or they looked at the law rather than relying on what people on social media say.
G
guest2 a year ago

Reply
Upvote
1 upvotes
@gu3st Over 70 million Americans voted for Trump, so perhaps those Republican Politicians were merely carrying out the wishes of their constituents?
M
mamamia-user-391653937 a year ago

Reply
Upvote
3 upvotes
@guest2 You are kidding this is the greatest miscarriage of justice seen, and the sad thing is the people will pay for it in the long run.
L
laura__palmer a year ago