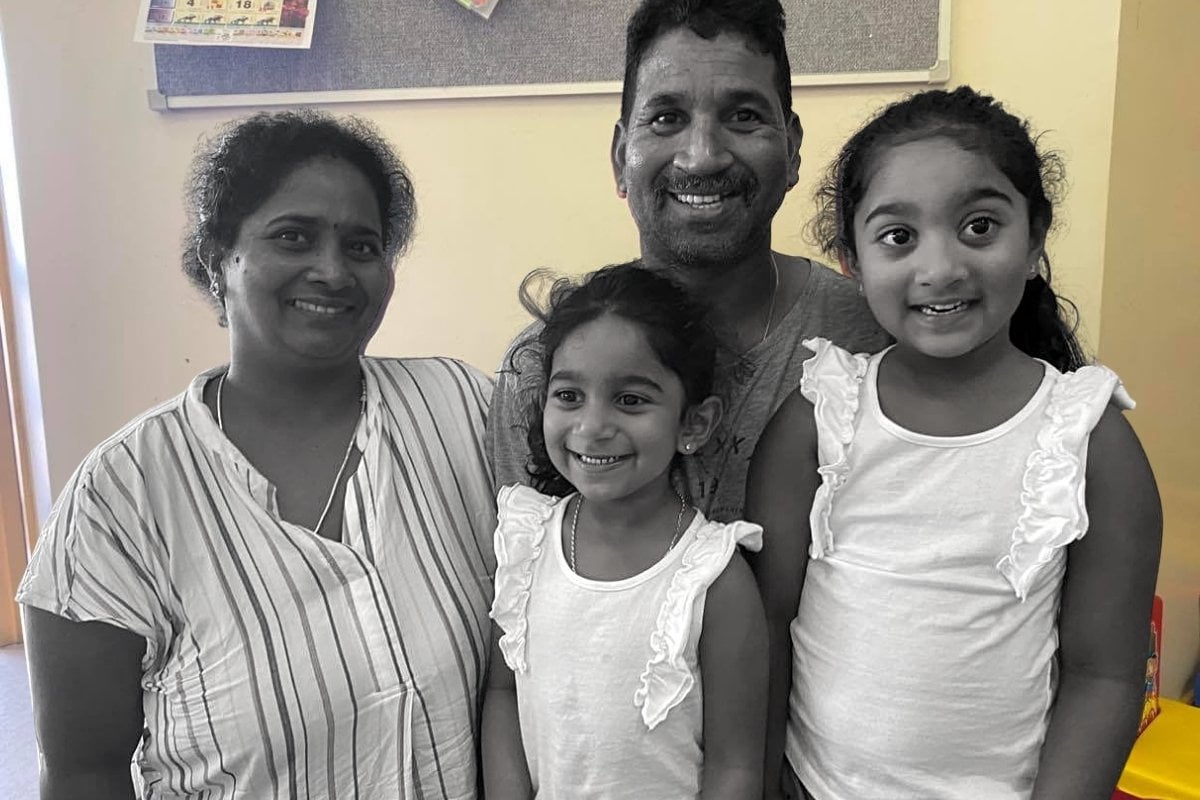 After two years on Christmas Island, the Murugappan family is finally preparing to return to the mainland, to leave the wire fences, demountable buildings, and 24-hour police guard of immigration detention behind.

Tamil asylum seekers Priya and Nadesalingam Murugappan and their young Australian-born daughters, Kopika and Tharnicaa, have been detained on the remote Indian Ocean outpost since 2019, while they've waged an intricate legal battle to remain in Australia — the country they've called home for close to a decade.

But their return to the Australian community is not the victory they or their advocates had hoped for.

"I've made a compassionate decision..."

On Tuesday, federal Immigration Minister Alex Hawke granted approval for the family to live in Perth under a community detention arrangement, after the youngest of the two children was medically evacuated there with a life-threatening blood infection.

Four-year-old Tharnicaa has spent the past week laying in Perth's Children's Hospital with sepsis coursing through her blood, a condition that doctors suspect may have been caused by untreated pneumonia.

Listen to the latest episode of The Quicky, where the team investigates into 'Fortress Australia'. Post continues after podcast.

"The family will now reside in suburban Perth through a community detention placement, close to schools and support services, while the youngest child receives medical treatment from the nearby Perth Children’s Hospital and as the family pursues ongoing legal matters," the Minister said in a statement.

Elaborating on the sudden change of heart, Minister Hawke told Sky News it was a "compassionate decision".

The timing is curious, to say the least.

There was no compassion when Priya's bridging visa expired in March 2018 and immigration officials swooped on the family's home in Biloela, Queensland, giving them 10 minutes to pack their belongings.
Nor was there compassion during their initial detention in Melbourne when the girls were only allowed to play outside for 30 minutes a day and suffered nutritional deficiencies that saw Tharnicaa undergo surgery to remove her rotting teeth.
Nor was there compassion in May when Priya spoke about her struggles with depression and concerns for her safety. Nor was there compassion in the 10 days that Tharnicaa was fighting a fever before being deemed sick enough to be evacuated to Perth last Monday.

No. Minister Hawke's "compassionate decision" came now, after images of the little girl crying in her hospital bed earned front-page billing around the country.

Now that former High Court judge Sir Gerard Brennan has publicly slammed the Government for inflicting "cruelty" upon an innocent child "to punish her parents who came by boat" and discourage others from doing the same.

And now that his own coalition colleague, Barnaby Joyce, has opposed the family's deportation and questioned whether they would be treated differently if their girls' names were "Jane and Sally". 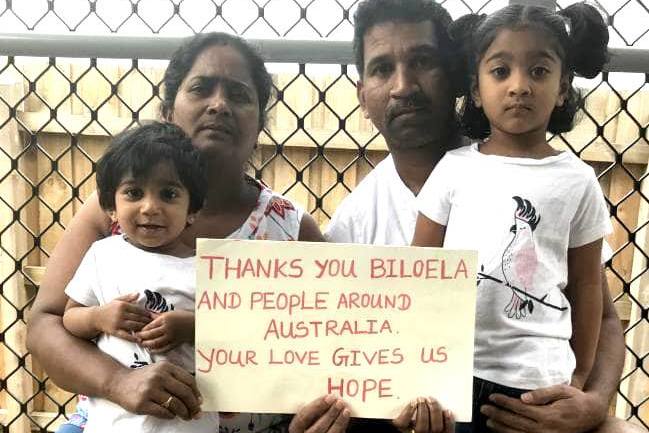 Image: Facebook/Bring Priya, Nades and their girls home to Biloela.

This is a politically motivated decision if ever there was one. It's clearly designed to ease public pressure without compromising the Government's election-winning border-protection policies.

Because, yes, Priya and Nades arrived by boat. They are members of the Tamil ethnic minority, which were slaughtered in the tens of thousands during Sri Lanka's bloody civil war.

During the conflict, Priya watched her fiancé burned alive alongside five other men, and Nades' body is still scarred by shrapnel from the fighting.

The conflict ended in 2009, and like many Tamil people, they fled in the post-war period seeking a life free of violence and persecution.

They arrived in Australia in 2012 and 2013, respectively, and it's here they met, married, worked, had their two girls (who because of their parents' immigration status aren't Australian citizens), and were embraced by the Biloela community that has been advocating tirelessly on their behalf throughout their detention.

The Minister has the power to intervene and grant them a visa. But his compassion for the family is as temporary as it is sudden. He made it very clear that their new community detention arrangement is only in place while their legal challenges remain before the courts.

"Importantly, today’s decision does not create a pathway to a visa," he said in a statement.

"The Government’s position on border protection has not changed. Anyone who arrives in Australia illegally by boat will not be resettled permanently. Anyone who is found not to be owed protection will be expected to leave Australia."

In fact, speaking on Sky News, Minister Hawke insisted that Sri Lanka is "safe", now that the civil war is long over. Despite the fact that there is ongoing police and military presence in Tamil areas, and that in recent years there have been reports of torture and forced disappearances.

The truly compassionate decision is clear.

A
albury22 a year ago

Reply
Upvote
3 upvotes
@albury22 Such a weak argument.
C
cat a year ago

Reply
Upvote
1 upvotes
@albury22 over crowd? We live on an entire continent & are the 7th most sparsely populated country on earth.  Land mass  is our single biggest military weakness- with our population we could never defend the amount of coastline we have.
S
srn a year ago

Reply
Upvote
14 upvotes
Just let the family return to Biloela! They have proven to be excellent, hardworking, community minded people. It’s all the girls have ever known. We are all sick of watching this play out in such a disgusting and un-Australian manner! This is shameful and in humane. Yes, they came by boat. I think they have suffered enough for this perceived crime. Let them live, work, school in Australia. I don’t pay my taxes so we can pay millions to lock sick children up and make their families suffer.
G
gypsy a year ago