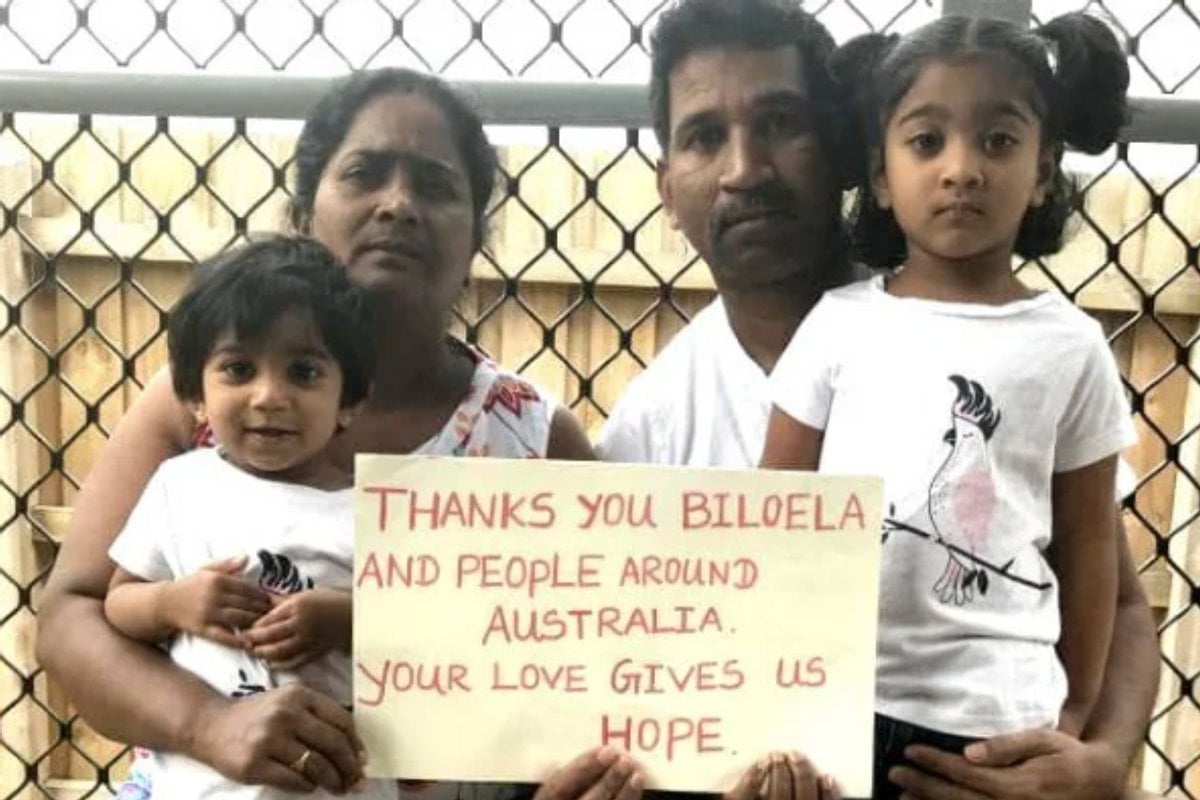 Over the past few years, I have been absolutely heartened by the support that the Australian public has shown for Priya, Nades, Kopika and Tharunicaa, the Tamil family who have spent years working in, contributing to and building relationships in Biloela, Queensland.

We have seen peaceful protests, thousands of signatures on online petitions and even staunch supporters of Australia’s refugee policy, standing up to say enough is enough for this family.

Ripped away from their home in the middle of the night in 2018, spending month after month languishing in detention centres on Christmas Island, Priya, Nades and their daughters have become the human faces of how Australia treats people seeking asylum.

Their faces, their stories and their treatment have made it impossible for people to go on ignoring what these policies mean in the reality.

As a country, we have adopted punitive policies and made capricious decisions about people’s rights and treatment.

We have a system that means, if you were forced to arrive in Australia by boat an arbitrary tick-a-box exercise by a federal officer will have determined whether you will have been allowed to stay here in Australia on a temporary protection visa or whether you are still enduring nearly eight years of indefinite detention having been sent to Nauru or Manus Island for so-called ‘Offshore Processing’.

We have a system that means that if you miss an arbitrary date, regardless of how or why you missed this date, be it language difficulties, health issues, a misunderstanding of what the date meant, your protection claims will not be automatically assessed, and you may have no opportunity to be heard.

We have a system that has no policy in place to protect children from detention nor any independent voice to determine their best interests, as has been reflected throughout the last almost three years of Kopika and Tharunicaa’s lives.

Since 2012, Australia had a policy of enhanced screening which saw at least 1000 people almost instantly deported to Sri Lanka and Vietnam before their claims were even assessed, as could have been the case for the Tamils, if it weren’t for legal interventions sought by the family’s incredible legal counsel.

What we have learnt, seen and heard from Priya and Nades cannot be forgotten.

We are reminded that the Australian community is a compassionate one.

When faced with the reality of the application of this policy, the Australian people have been horrified. The truth is that Priya and Nades and their girls are not an exception, and not an anomaly.

This family represents the majority of the refugee and asylum seeker community here in Australia and for as long as this policy exists, we will see more harm done to mothers, fathers and children.

For this family, despite successfully upholding an appeal in the Courts, the fight for them is not over. And our fight should not end with this family. Let us challenge the system that created and allowed for this suffering. Let’s end the detention of children. Let’s end the arbitrary deprivation of the rights of people who seek asylum.

We need to keep fighting to bring change, to return to a policy we can be proud of and to demonstrate that we are a country that does afford a fair go, an experience that has not been felt by many seeking asylum on our shores.

Sarah became RACS Centre Director and Principal Solicitor in 2019. She spent a number of years working with people seeking asylum and refugees in visa cancellation and civil law issues, before joining RACS as a Solicitor in 2013.

Sarah was RACS’ first Child Specialist Solicitor, developing an outreach legal service to assist unaccompanied children seeking asylum in NSW and throughout Australia, and worked tirelessly with children who were detained on Christmas Island and faced transfer to Nauru. She continued this outreach to young people who were transferred to Nauru as unaccompanied children.

Sarah became Principal Solicitor in 2016 and has led RACS in responding effectively to a shifting policy environment over recent years. In 2017, Sarah participated in the UNHCR Expert Roundtable on family reunification in Brussels, and in consultation with the UN Special Rapporteur on Human Rights Defenders at York University. In 2018, she was awarded Migration Partner of the Year by Lawyers.

Sarah has also managed RACS’ project responding to the Immigration Data Breach that occurred in 2014, and has been instrumental in helping people, held in offshore detention, access critical medical attention.

Reply
Upvote
This has been one of the most disgusting things that has been done to any family wherever they are from and the Minister concerned Peter Dutton is the one to blame although he himself bought cheap labor in the form of Nannies he is determined to cause as much grief as possible to this family. The Prime Minister should intervene here and get rid of this minister, cant think of one thing he has done that we could be proud of.
C
cat a year ago

Reply
Upvote
@mamamia-user-391653937 Dutton follows in the PMs footsteps- Scomo created the policy whereby no one who arrived by sea could be resettled in Australia, even if they were genuine refugees. He pushed through illegal immigration reforms by threatening crossbenchers that he would send 130 children to manus island if they didn't pass them. Peter Dutton is holding the flag, but dont ever forget that Scott Morrison was willing to hold children ransom to make sure that other vulnerable children- the vulnerable children in this family- would never live in Australia.
L
lawyermummy a year ago