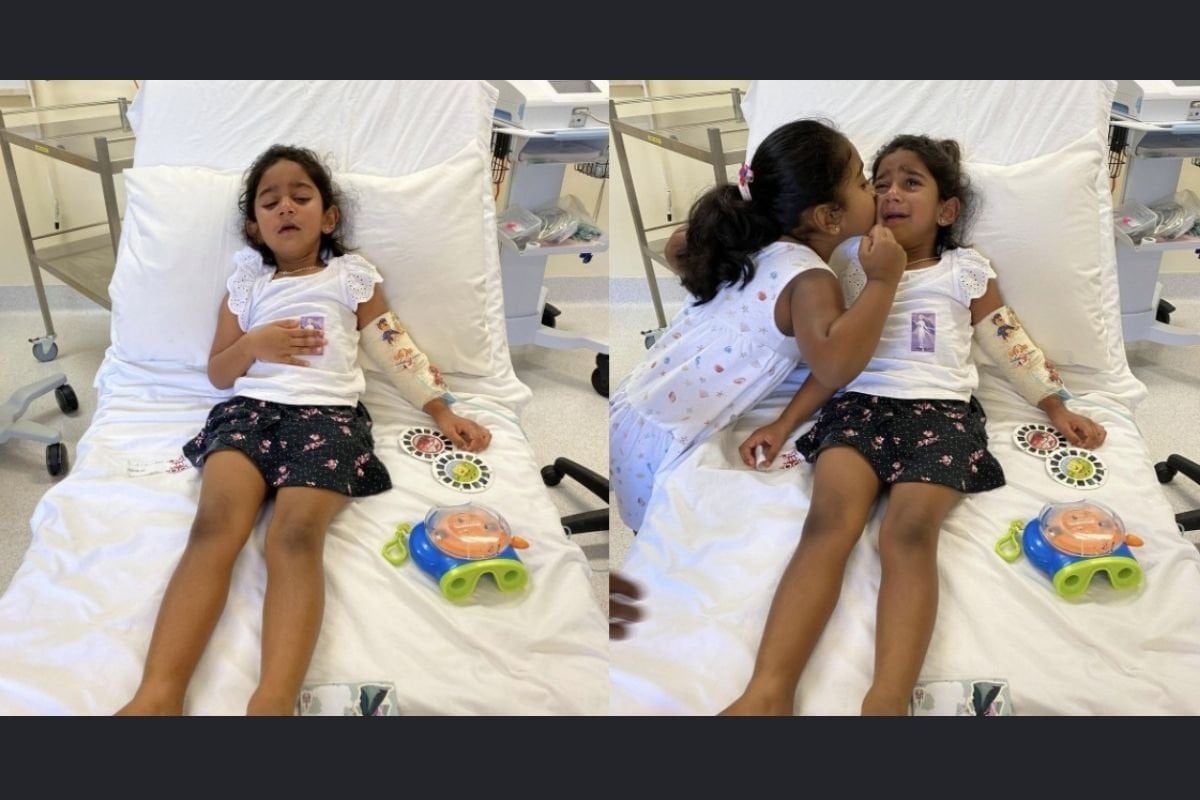 Three-year-old Tharunicaa Murugappan hasn't known anything else but the walls of Christmas Island detention centre.

Since the age of seven months, she's lived in a rundown demountable building surrounded by wire and guards with her older sister and her parents.

For the past 10 days, she's been really sick. But despite vomiting, dizziness, diarrhoea and a temperature over 40 degrees, she's only been given Panadol and Nurofen.

Now she's sitting in a Perth hospital bed after being medically evacuated, diagnosed with a potentially deadly blood infection caused by untreated pneumonia.

BREAKING: Tharnicaa (nearly 4 years old) is being medically evacuated to Perth for treatment of a suspected blood infection. She was hospitalised yesterday on CI after suffering a high fever, vomiting/diarrhoea & dizziness for 10 days. Pls keep our little cockatoo in your hearts. pic.twitter.com/ynnT5uNQIh

Photos of a distressed Tharni, as she's affectionately known, being comforted by her older sister Kopika, six, have been shared widely on social media and across Australian media outlets. They illustrate a story we've been telling since 2018.

A story of a couple, Nadesalingam and Priya, who met in Australia after they both separately sought refuge here from the persecution and horrors they - as Tamils - were being subjected to in their native Sri Lanka.

They fell in love on our shores, got married and had children. Setting up home in the small town of Biloela, Queensland, where they remain valued members of the community.

Watch: Kopika turned six in May, her third birthday in detention. Post continues after video.

But in March 2018, the couple and their young girls were detained in a dawn raid. Priya's bridging visa had expired and authorities swooped.

They've been fighting ever since. They've spent three Christmases locked up. Three years trying to give their Queensland-born daughters a childhood behind bars. Three years in the depths of the Australian justice system.

Every few months their plight reappears on the front pages of our newspapers, and Australians look at the smiling faces of Tharni and Kopika holding up home drawn pictures, or attempting to play in concrete pens inside the prison-like facility and ask why? How is this okay? It feels un-Australian. It feels inhumane. It feels like cruel political point scoring.

But the Government and Immigration Minister (who has the power to intervene) remains unswayed. They've vowed to never resettle anyone who arrives on our shores illegally by boat, and do not consider the girls to be Australian citizens.

They've spent $6 million keeping the family in detention for the past 39 months, even as politicians, media personalities, celebrities, and their community of Biloela share their opposition. 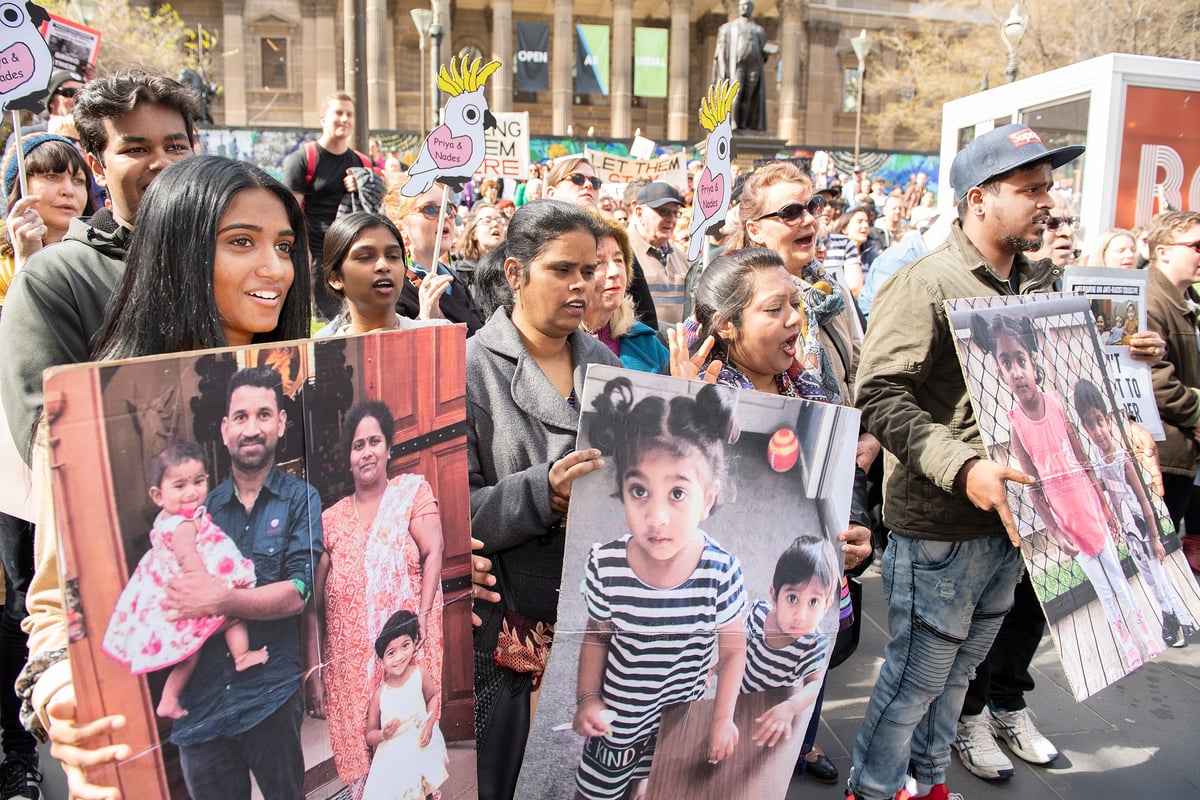 Numerous rallies have held in capital cities across Australia over the years, demanding: "let them stay." Image: Getty.

And so we have watched babies grow into little girls with razor wire the backdrop of all of their family photos.

We've watched the pain so evident in the eyes of their parents, as they beg the Australian government for reprieve.

We've heard stories about little Kopika asking her parents "why do people always follow us?" and "why can't I go to my friend's house?" She attends school on the island under guard, and as she gets older and more aware, her questions get more persistent. She doesn't understand why her family has to live like this.

We've heard about Priya's tears at night, as she struggles daily with her children's distress. 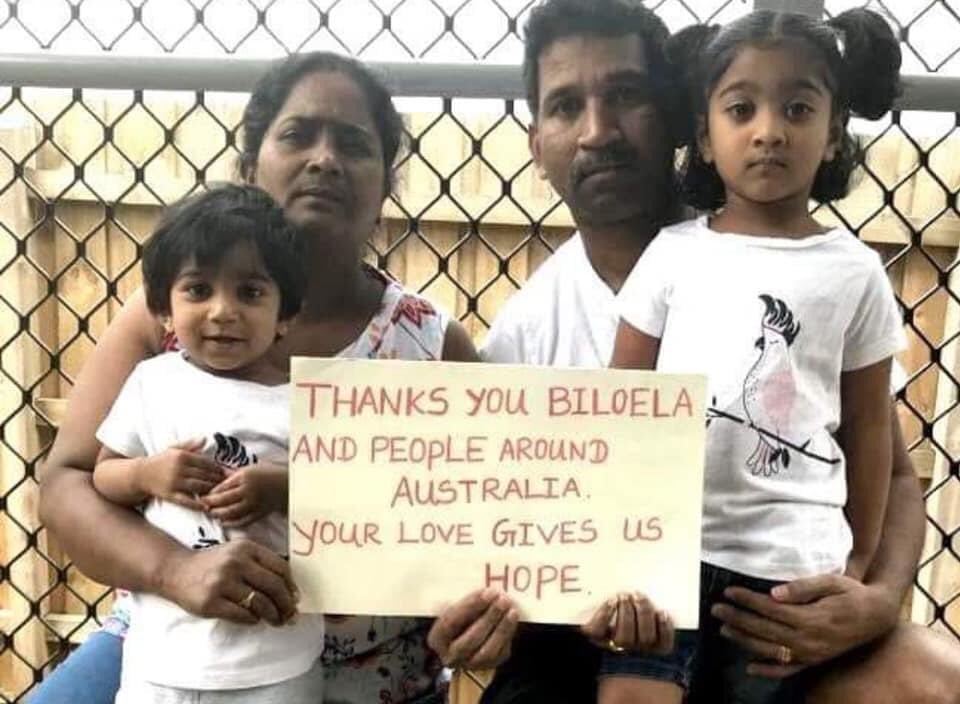 We've watched Tharni grow from a baby into a little girl behind razor wire. Image: HometoBilo/Twitter.

And now we can see that same distress in the eyes of her young daughter Tharni, as she lies terrified in a hospital bed.

BREAKING: Tharni has been diagnosed with (untreated) pneumonia.
We think this caused her blood infection. How did this go undiagnosed for so long that she became so ill? Please keep her in your thoughts.
Karen Andrews, you can end this little girl's suffering today. #HomeToBilo pic.twitter.com/exuSk28U5l

Tharni and Kopika are the only children left in Australian immigration detention. Hearing their story, knowing their fight. Seeing Tharni sick and distressed... is this who we are, Australia? What is it going to take for our government to show some compassion?

What is happening to this family at the hands of Australia cannot be justified or spun as anything other than cruel.

This story is no longer political. It's simply inhumane.

You can sign the petition to bring them home, here.

S
StaceyS a year ago

Reply
Upvote
4 upvotes
I have empathy for the two little girls. Her parents made choices, separately to illegally enter our country to seek asylum. They knew what they were doing and what the potential repercussions of their actions were. And when they got here, faced such repercussions. To which end we will never know had they waited it out. But instead they decided to bring not one but TWO innocent children into a life and world of uncertainty. One where they as children were citizens of a country their parents illegally entered and not granted yet permission to settle.
As a parent myself I cannot fathom why you would subject your children to such uncertainty?
L
laura__palmer a year ago

Reply
Upvote
2 upvotes
@StaceyS perhaps they thought they were in a safe place that would treat children humanely, no matter what their parents had (legally) done. That is what anyone would have assumed, the level of cruelty this government has shown is beyond belief.
Perhaps they also thought that, given the genuine threat to their lives, and their positive contributions to the community they lived in - who are desperate to have them back to this day- Australia would comply with jnternational law and grant their asylum.
Perhaps they thought that they had the same inalienable human right to reproduce and be treated with kindness that every other human on earth has.
I cannot fathom how, as a parent, you could have so little empathy for them.
S
StaceyS a year ago

Reply
Upvote
@laura__palmer did they not come by boat?
I think that the little girls have done exactly as they were intended… to prevent their parents from being deported once their visa ran out. And for that, I am upset at the parents. That is why I have empathy for the children.
It’s how I feel. It might be unpopular. Or it might be an opinion that isn’t being shouted as loud as other support.
M
mamamia-user-482898552 a year ago

Reply
Upvote
2 upvotes
@StaceyS So are you saying entering Australia by plane to seek asylum would be any different? What difference - aside from a political party spun on hateful rhetoric of "stopping the boats" - does the mode of transport these people used to flee a country in which they feared for their lives?
C
caring mother a year ago

Reply
Upvote
2 upvotes
How can we help? What can we do? It breaks my heart!!
L
laura__palmer a year ago