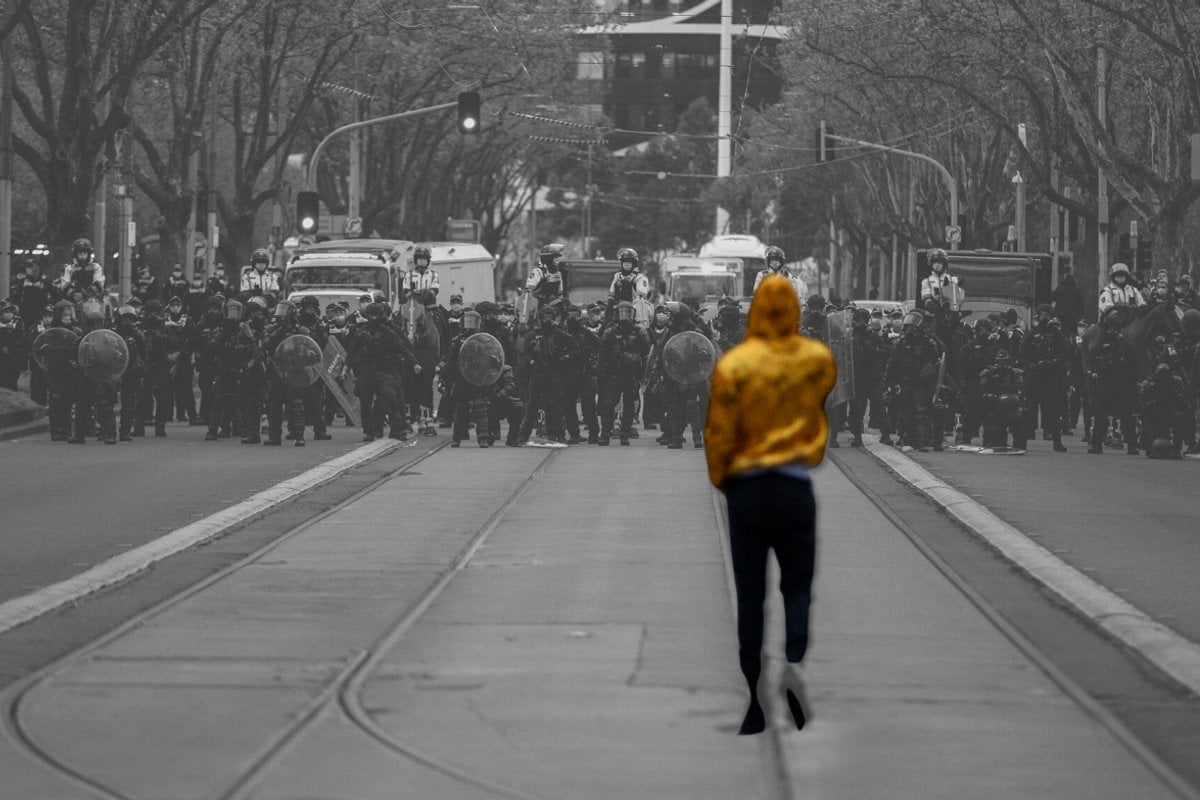 Scenes of protesters clad in hi-vis jackets and shouting anti-vaccination slogans have dominated the news this week. As the ABC reported: “some of those gathered held a banner reading ‘freedom’, while others sang the national anthem and chanted ‘f*** the jab’.”

Some attacked union offices, drawing criticism from officials such as ACTU chief Sally McManus, who described the protests as being orchestrated “by violent right-wing extremists and anti-vaccination activists.”

These images may shock some but for researchers like me — who research far-right nationalist and conspiracy movements, and explore the online spaces where these people organise — these scenes came as no real surprise.

Far right nationalists, anti-vaxxers, libertarians and conspiracy theorists have come together over COVID, and capitalised on the anger and uncertainty simmering in some sections of the community.

They appear to have found fertile ground particularly among men who feel alienated, fearful about their employment and who spend a lot of time at home scrolling social media and encrypted messaging apps.

The latest in a continuum.

It’s important to see what’s occurring with these protests as part of a continuum rather than a series of unrelated incidents. This week’s protests are related to anti-lockdown protests held in 2020, and earlier this year.

It was at first limited to the conspiracy theorist and anti-vaxxer crowd. Some were just upset by lockdowns but most of the planning conversation online was being led by anti-vaxxers and QAnon activists.

These movements thrive on anxiety, anger, a sense of alienation, a distrust in government and institutions. It’s really no coincidence this is occurring most vigorously in Melbourne given what this city has been through with lockdowns.

It has really built momentum over the last year and, more recently, been infiltrated by far right groups.

The far right are capable recruiters.

If you go back two years ago, anti-vaxxers were a tiny minority. They have grown significantly in size and influence online.

I have observed in my research the far right consciously appropriating the language of anti-vaxxers, of the conspiracy movements, seeking to exploit their anger and distrust.

I spend a lot of time on the encrypted messaging groups used by these groups and in the online spaces where they organise. I have seen the same names popping up, and growing use of hard right or far right national socialist iconography.

It is almost like grooming. The far right are a lot more capable of recruitment than we give them credit for. They have found an audience who are angry, frustrated and looking for someone to blame.

Many of these groups share similar ideas: that there is a cabal of politicians and elites who are oppressing you. That freedom is at risk, that one must stand up for liberty, that there is a wealthy and unelected ruling class controlling you.

COVID — with all the fear, uncertainty, lockdowns, policing and employment impacts it brings — has helped bring these groups together.

Victoria police earlier this year warned a parliamentary inquiry into extremism that: “online commentary on COVID-19 has provided a recruiting tool for right-wing extremist groups, linking those interested in alternative wellness, anti-vaccination and anti-authority conspiracy theories with white supremacist ideologies.”

There is a strong historical animosity toward trade unions (as the vanguard of the political left) by the far right. It would be disingenuous to view the far right as unintelligent thugs. They are learned in the history of national socialism and fascism and the preconditions for its rise.

Among the protesters there was a really self-conscious effort to represent themselves as themselves as tradies and workers. Some observed protest organisers encouraging people to wear hi-vis clothing to these rallies.

It’s important to note the construction industry and trade union movement in general are incredibly diverse, and there will be different and competing views around vaccines, masks and lockdowns.

Some of these protesters actually are tradies, some may not be. Some are union members, others are not. But the broader point is there is a group of people who are incredibly angry about the situation they find themselves in, and resentment is proving fertile terrain for organised groups.

This is not an easy knot to unpick, but there are three main approaches I think would really help.

The first is we really need to get people back to work. That is critical. People’s self-esteem and livelihood is tied up in work and the ability to put food on the table, in staying busy and socially connected (which is often via work).

By ensuring safe, secure employment for people, you really take away one of the main drivers of anger, resentment (and too much time to scroll around social media) that is helping push people toward extremism.

The second is politicians need to think hard and fast about what they can do to help rebuild trust in them, in government and in our institutions. Politicians can’t hide behind press conferences and press releases to get their message out. They need to get out and build trust, face-to-face with the community. Of course, that has been constrained by lockdown but this work is urgent and important. Politicians need to lead and create relationships with the community again.

Reply
Upvote
1 upvotes
How do you, as a researcher, not fall into the same trap these people fall under?If you spend hours reading these forums and observing these groups, how do you escape becoming groomed yourself?  I've always believed I would never join a cult, or enter into an abusive relationship, or fall for an online scam - but to be fair, I've never really had the opportunity to prove this theory (except for deleting the emails form a Nigerian Prince who wants to give me one million dollars). I have family members who are otherwise intelligent, caring, critical thinkers who believe in the whole Q-Anon movement. They've encouraged me to go down the rabbit hole but I refuse to (mostly because I fear I'll fall under the same spell they have.)
M
mamamia-user-482898552 8 months ago

Reply
Upvote
@kelloneill If you know more than the people trying to groom you, it's impossible to be seduced by what they are saying, because it's instantly and glaringly obvious that they are not making any sense at all. That's the difference between actually knowing how to do research, doing it and understanding the results, and a layperson with no formal grounding in a subject "doing my research" in the sense of reading a bunch of rubbish on the internet and thinking that is the equivalent of the former scenario.
L
laura__palmer 8 months ago

Reply
Upvote
@kelloneill If you fall down this rabbit hole, you lack critical thinking skills and the skill of evaluating information, no matter how intelligent you seem to be.
C
cat 8 months ago

Reply
Upvote
1 upvotes
@laura__palmer thats just not true- its literally possible for anyone to end up in a cult or QAnon. We all like to think we would see through it, but the right combination of vulnerability, influence and a lack of other perspectives will put anyone there. There are known systems to brainwash people that override anyone's critical thinking skills. In fact, statistically, educated people end up in cults at a higher rate than non-educated people.
L
laura__palmer 8 months ago

Reply
Upvote
1 upvotes
@cat I disagree. I don't think it is possible for *anyone* to end up in a cult or QAnon. I don't think people who do end up in these sorts of organisations or belief groups are unintelligent, but I do think they lack the ability to properly evaluate and critically assess information, especially if going down the QAnon/plandemic rabbit hole.
G
guest2 8 months ago

Reply
Upvote
2 upvotes
No doubt there are right wing rat bags, anti vaxxers and s''t stirrers joining in, but it is down right delusional to believe that the majority of protestors are not construction workers.   I remember the 'good old days' of Norm Gallagher and the BLF and these protests are very similar.
Z
zaky 8 months ago

Reply
Upvote
9 upvotes
@guest2 in the past the Union demonstrations were about work safety and work conditions.  The mob demonstrating the last few days has been campaigning against measures that aim to increase the workers' and community safety i.e. they are trying to undo any union gains in that area.  There might have been some unionists there but make no mistake this issue has been hijacked by elements who actively work against unions.
L
laura__palmer 8 months ago

Reply
Upvote
2 upvotes
@zaky Yeah, anyone protesting against vaccines in the workplace should hand in their union cards, because they clearly do not care about working conditions
K
katp 8 months ago