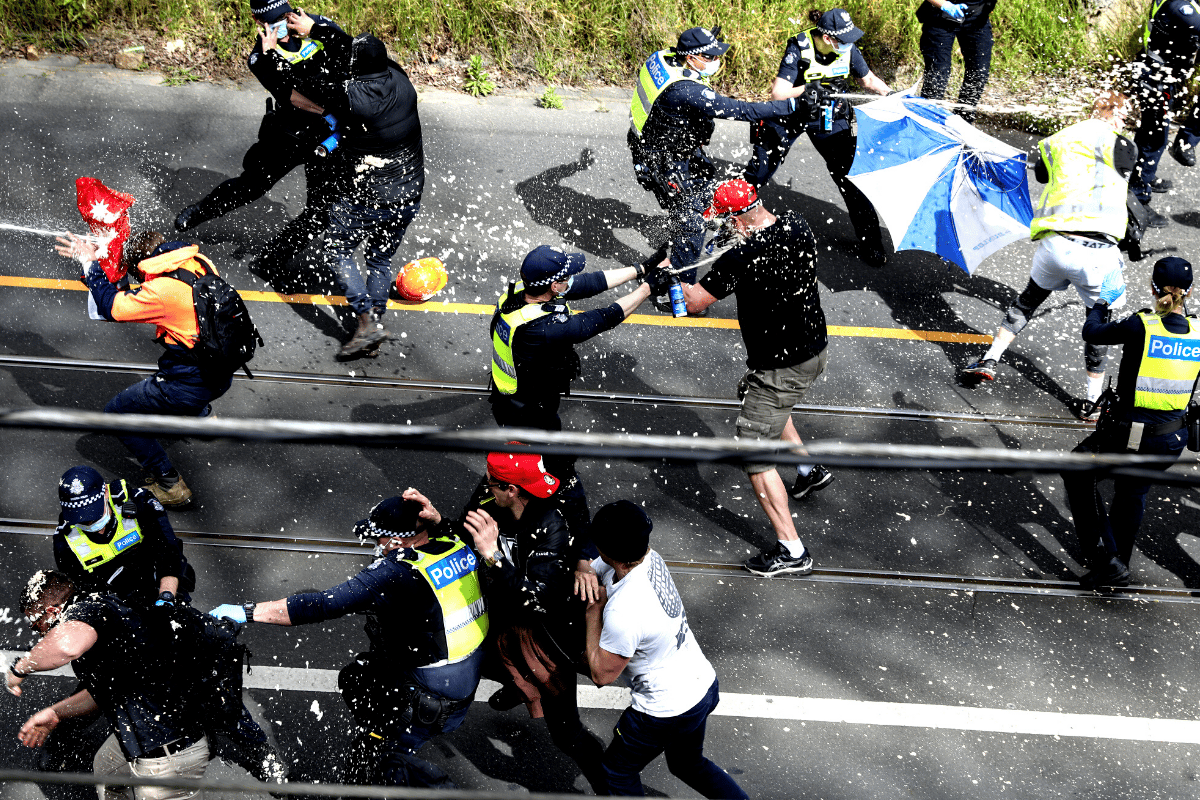 Thousands gathered in major cities across Australia, as part of nation-wide anti-lockdown protests on Saturday.

In Melbourne, hundreds of people were arrested and 10 police officers were injured after protesters violently clashed with police in the city.

Meanwhile, thousands took the streets to rally across Perth, Brisbane and Adelaide, while a strong police presence hindered demonstrations in Sydney.

Listen: Mamamia's daily news podcast, The Quicky, finds out how vaccine passports will work in Australia and why people are divided on whether they should exist at all. Post continues below.

Here's everything you need to know about the protests across Australia this weekend.

Violent scenes erupted in Melbourne as 235 people were arrested and 10 police officers were injured during anti-lockdown protests in the inner city.

On Saturday, more than 2000 police officers formed a "ring of steel" around the Melbourne CBD and were deployed at road checkpoints and barricades.

However, police later changed locations after hundreds of demonstrators gathered in the inner suburb of Richmond, in a last-minute effort to avoid police.

During the protests, stones, bottles and other objects were reportedly thrown at police, who used capsicum spray to subdue demonstrators.

Trapped in a gorge formed by the road, protesters lob projectiles at police, who attempt to subdue the crowd by deploying capsicum spray @theage pic.twitter.com/1upyP4tOsR

Protesters break through the police line, an officer gets assaulted and trampled by demonstrators, people are screaming and covered in capsicum spray @theage pic.twitter.com/qXX9lIAZRJ

Of the 235 people arrested, 193 were also fined for breaching the public health orders, while others were arrested for offences including assaulting police, riotous behaviour, weapons and drug offences.

Victoria police commander Mark Galliott said of the 10 officers injured, six were rushed to hospital, where three are still being treated for injures including torn muscles, broken bones and bruises.

"What we saw today was a group of protesters that came together not to protest freedoms, but simply to take on and have a fight with the police," he told reporters on Saturday.

Galliott added that police were confronted with "angry, aggressive young males there to fight".

In Sydney, a strong police presence disrupted a planned protest at Sydney Park in the city's inner west.

The protest was set to be held at 12:00pm and was only attended by a few people.

NSW Police Assistant Commissioner Peter Thurtell described the major police operation as a success, with "no real protest activity" taking place in metropolitan Sydney, according to The Sydney Morning Herald.

Meanwhile, in Byron Bay between 200 and 300 unmasked people gathered outside the Byron Bay courthouse as part of a largely peaceful protest.

According to the ABC, police contained the demonstration to the area and several arrests were made.

Across the state, 32 people were arrested in connection with planned protests, while 265 penalty infringement notices were issued. Over 60,000 vehicles were also checked at 19 traffic points on major roads.

Anti-lockdown protests in other sates.

In Perth, around 2000 demonstrators gathered the city's CBD to join the nationwide anti-lockdown protests.

Despite only few COVID-19 restrictions currently in place in Western Australia, crowds turned up to Perth’s Forrest Place to protest against lockdowns in other states and mandates around the COVID-19 vaccine.

Protesters called for "freedom" while holding placards demanding the re-opening of the state's borders and an end to mandatory vaccination policies.

The protest was met with a heavy police presence and was reportedly peaceful.

Protesters rallied again restrictions (despite the state not being in lockdown) and the COVID-19 vaccine. Police said they were largely peaceful.

According to 9 News, police made at least one arrest.

Most attention has been on the Melbourne anti-lockdown protests today but Brisbane has also seen a large turnout. pic.twitter.com/p29cxflS34

An anti-lockdown protest also took place in Adelaide, where over 1000 mostly-maskless demonstrators gathered in Rundle Park before peacefully marching through the city.

Reply
Upvote
1 upvotes
@flyingdale flier If you look at the videos and pictures from the various rallies, there were many women (of all ages) as well.
Y
yeahyepyes 8 months ago

Reply
Upvote
1 upvotes
@flyingdale flier Australia is predominantly white so you are probably going to see more white people at these events but I think you would be surprised to see the amount of woman and different ethnicities attending
People are angry at the government for taking away their freedom, it's not just white men who are suffering.
M
mamamia-user-482898552 8 months ago