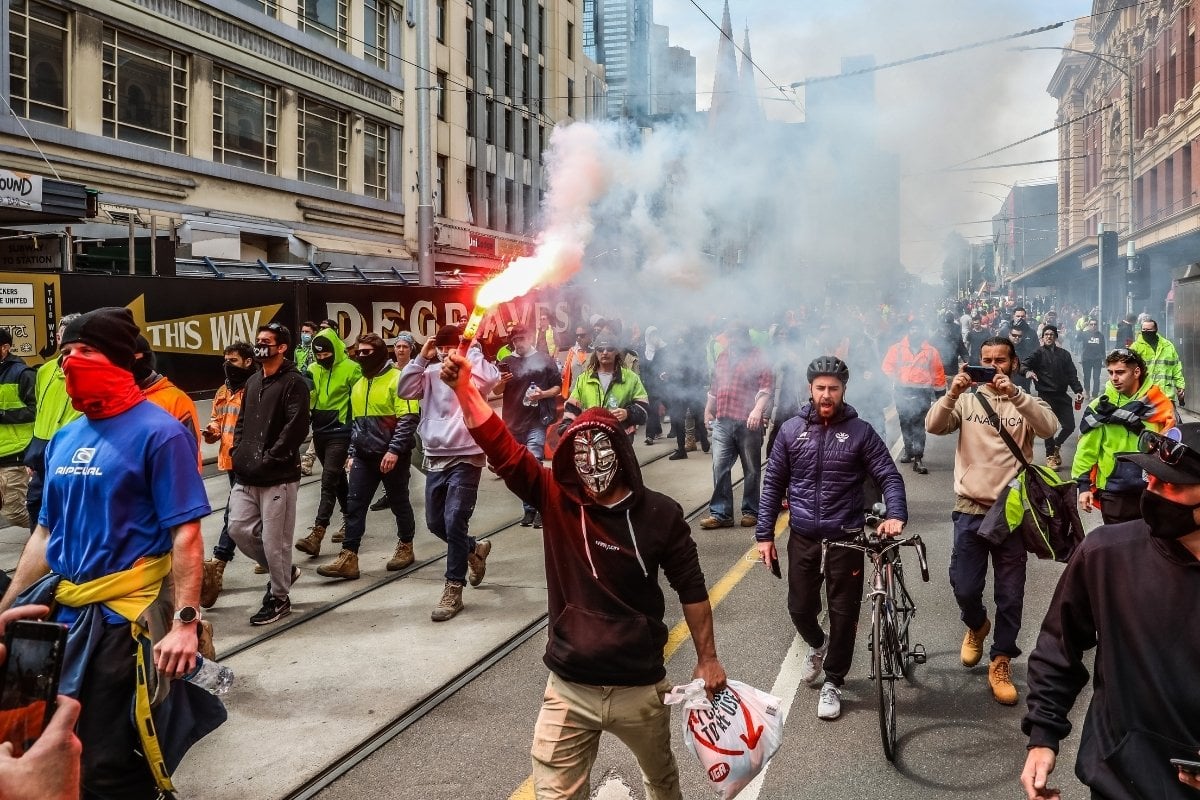 On Wednesday morning, Victoria's Police Minister Lisa Neville warned that police were ready to respond should protestors take to the locked-down city's streets yet again.

"If you're thinking about coming into the city today to cause violence and harm, just know that Victoria Police will deploy whatever tactics they need to in order to ensure that you are held accountable," she said.

Minister Neville's warning came after an estimated 2,000 people descended on Melbourne's CBD on Tuesday, in a chaotic and violent demonstration against mandatory COVID-19 vaccinations and restrictions for the construction industry.

Anti-lockdown, anti-vaxx construction worker protesters have completely halted Melbourne’s busiest freeway. Cars block traffic who are trapped by thousands of people, and who are letting off fireworks and settling in @theage pic.twitter.com/7s4mGWPfD4

The unrest shut down parts of the city as well as the West Gate Bridge, as protestors hurled projectiles, let off flares attacked police cars and targeted media.

Footage captures Channel 7 news reporter Paul Dowsley being grabbed around the neck by a man in high-vis clothing and doused with a liquid believed to be urine. He later had a can of drink thrown at the back of his head, leaving him with a small laceration.

The moment @paul_dowsley is hit (again) this time with a can of drink. pic.twitter.com/jywumGU81O

Some 63 people were arrested, the majority for non-compliance with a public health order.

What sparked the protest?

On Thursday, Victorian health officials announced a raft of restrictions for construction employees in an effort to curb the spread of COVID-19 at worksites. Among them was the closure of tearooms, which were deemed to be a "significant risk" for transmission.

In response, dozens of construction workers took their lunch and smoke breaks to the streets, moving tables and chairs onto CBD roads on Friday morning.

Victorian Secretary of Construction, Forestry, Maritime, Mining and Energy Union (CFMEU), John Setka, described the rule as "appalling" and said the workers had little choice but to spill out onto the streets: "It's not really a protest. They've got nowhere else to have their smoko," he told radio 3AW.

Tradies across Melbourne protesting against not being able to use tea rooms by having smoko on the street. They’ve stopped traffic on Collins street in the CBd, in Richmond and in Parkville @abcmelbourne #springst pic.twitter.com/JsLwuwsAvU

But come Monday, Setka and the CFMEU found themselves to be the target.

Several hundred people rallied outside the union's headquarters after Setka gave a radio interview in which he described mandatory vaccines for construction workers as an "unfortunate" reality of tackling a pandemic: "Extreme circumstances sometimes call for extreme measures," he told radio 3AW host Tom Elliott. "It’s unfortunate, but it is what it is."

Setka was responding to the recent Victorian Government announcement that by Thursday, September 23 all construction workers must provide their employer one of the following:

The CFMEU, while being pro-vaccine, has previously expressed opposition to mandatory vaccination, and some anti-vaccination activists accused Setka of being a "sell-out" by not standing up to the government over the ruling.

This is absolutely EPIC.. construction workers are furious their union boss John Setka sold them out.. they face termination if they aren’t vaccinated by Wednesday. pic.twitter.com/k1VmlNDwuD

The situation then escalated further on Tuesday following a Government declaration late on Monday night that the construction industry would be shut down for two weeks in metropolitan Melbourne, City of Ballarat, City of Greater Geelong, Surf Coast Shire and Mitchell Shire.

It's understood many of those who participated in Tuesday's unrest were not members of the construction industry but anti-lockdown activists, some of whom had dressed in high-visibility clothing.

Setka condemned the violence shown at the protests and blamed extremists for hijacking the event.

"There is a minority group there that are our members, a lot of the other people that are there are not our members. I don’t know who they are," he told Channel 7's Sunrise on Wednesday morning.

The union boss has blamed the protestors for triggering the shutdown: "Because of their actions on Monday, they’ve led to 300,000 people sitting at home so I hope they’re really proud of themselves."

Wait, was the industry shutdown a reaction to the protests?

Not according to the Victorian Government.

Announcing the move at 10pm on Monday, it cited outbreaks linked to the industry's workforce and compliance issues on multiple worksites as the reasons for the move.

Health Minister Martin Foley said there are 337 cases directly linked to 154 construction sites, and that the Government had for weeks warned the sector could be closed.

"The public health team was left with no choice but to hit the pause button and continue working with the sector over these next two weeks to improve compliance," he told reporters.

Industrial Relations Minister Tim Pallas added that inspectors visited thousands of worksites during the past week and about half were failing to comply with health directions.

"Broad-scale non-compliance across the industry was constituting a threat to public health in the most dramatic of terms," he said.