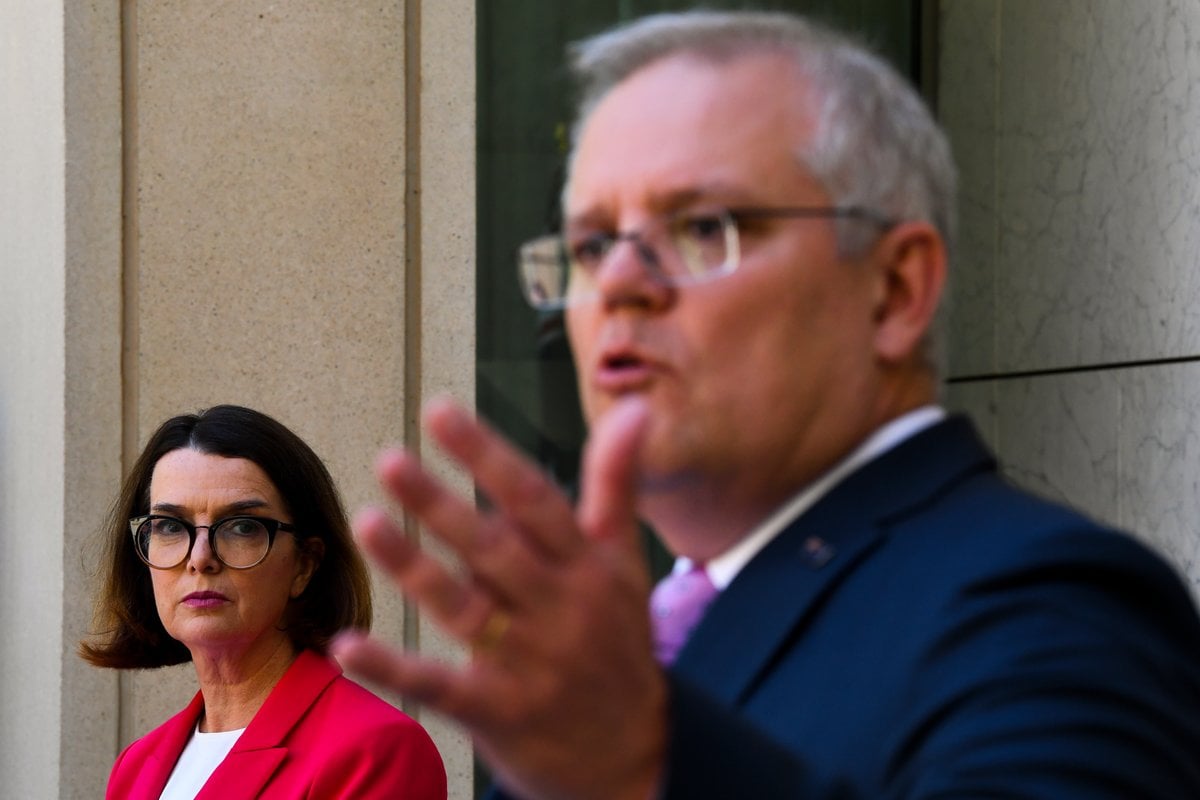 She was standing next to Prime Minister Scott Morrison during a press conference about changes to the government's JobSeeker payment in her capacity as Minister for Families and Social Services. Though the optics of the PM being flanked by a woman yesterday, was arguably no accident.

"As a woman in the government, your reflections on the culture inside, has it gotten better, worse, or no change since the bonk ban era?" Phil Coorey, the political editor of The Australian Financial Review asked Ms Ruston.

It was hardly surprising. Ruston would have been expecting a question like this, given the night before the ABC aired its Four Corners investigation of alleged inappropriate behaviour, sexism and extramarital affairs by government MPs.

"Well, Phil, the only thing that I can..." Ruston began in response.

She had muttered just seven words when Morrison railroaded the conversation, cameras reverting quickly back to him as he spoke over her.

"Sorry, how this ban is referred to I think is quite dismissive of the seriousness of the issue, Phil, and I would ask media to stop referring to it in that way," Morrison said.

"We took it very seriously and I think constantly referring to it in that way dismisses the seriousness of this issue, it’s a very serious issue. Thanks, Anne?"

Having sufficiently ranted about how much he dislikes the term 'bonk ban', Morrison gestured to Ruston. She could speak now.

"I can only reflect on my own experience, since I've been in this place since 2012, and I have to say I have always felt wholly supported while I have been here," Ruston replied, adding that nobody had personally shown her more respect than Morrison himself.

For many, Ruston's eventual response was unsatisfying. But her face while being interrupted by the man who "has provided [her] more support and shown greater respect towards [her] as an individual" said much more: 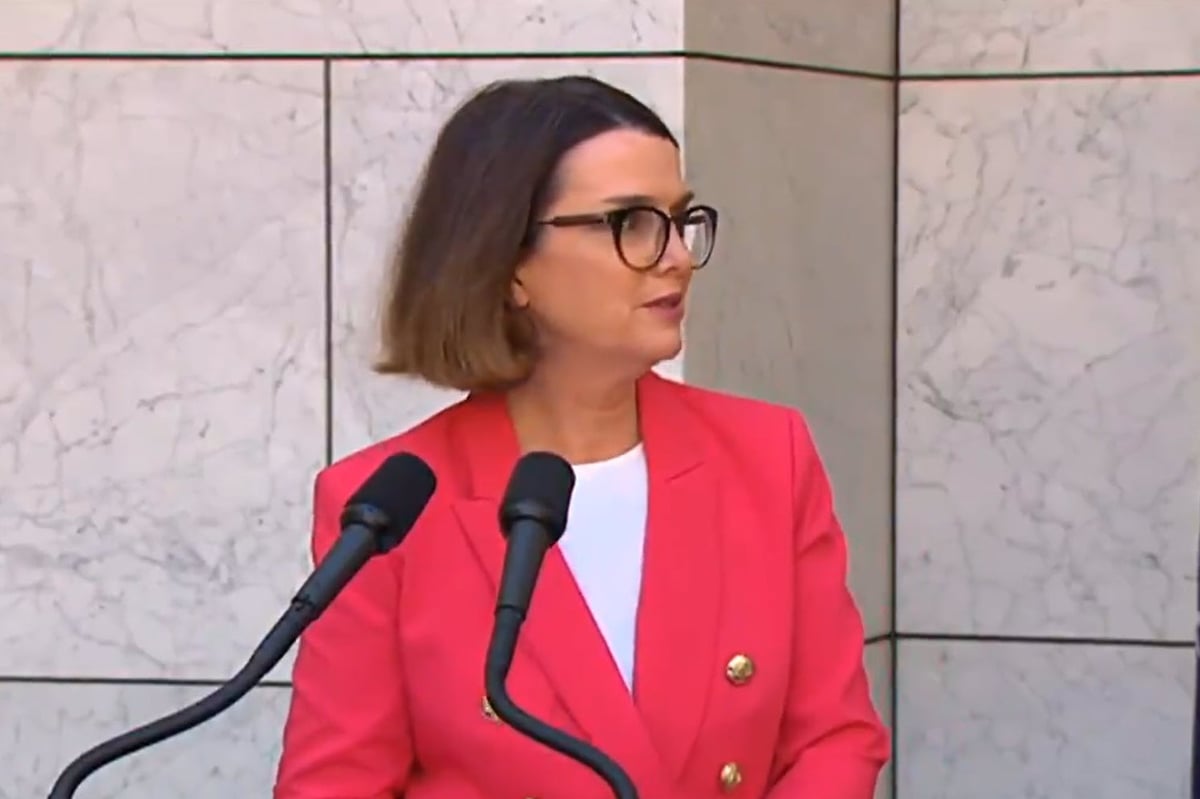 As the saying goes, actions speak louder than words.

Ruston was asked for her perspective - as a woman - on the issue of the treatment of women. And Morrison spoke over her.

In case you missed it, the ABC's investigation reported an affair between minister Alan Tudge and his former staffer, alleged inappropriate behaviour by Attorney-General Christian Porter (Porter has denied all allegations, and is considering legal options) and generally presented the toxic work culture and highly sexualised 'Canberra bubble'.

Both Tudge and Porter have campaigned on 'traditional family values.'

During the same press conference on Tuesday, Morrison added: "there is no greater thing that breaks my heart than the breakdown of a family".

"It breaks my heart," he said. "And frankly, that's the thing that bothers me most." 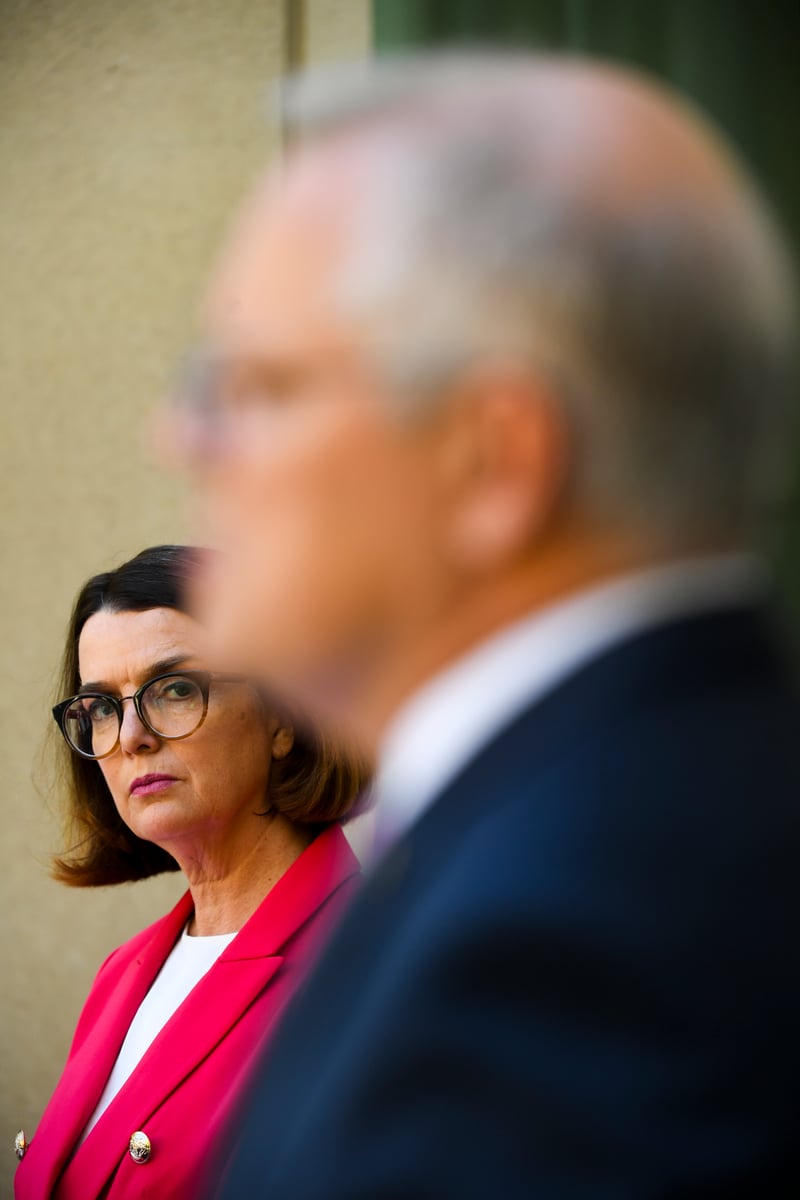 The Four Corners report was not just about the bad behaviour of men insistent on maintaining traditional family values. It was about power imbalances between federal MPs and their staff and antiquated, sexist attitudes towards women.

Among the allegations, Four Corners also presented messages from a WhatsApp chat between a number of female Liberal senators, in which they discuss the sexism they face in the workplace.

One message read: "It is passed [sic] time for us to get organised and collectively stand up. After listening in party room... to bikini judging commentary, enough is enough."

But these allegations haven't even been a part of the government's talking points in response to the damning report.

Morrison made it clear he would be taking no disciplinary action against Tudge or Porter.

"[The matters in Four Corners] relate to circumstances that occurred that were pertinent to the prime minister at the time [Malcolm Turnbull], and put to the Cabinet and the Ministry, and those matters were dealt with then," he said.

"It raises considerable cost and hurt, we are all accountable for our own behaviour. My ministers are in no doubt about what my expectations are of them ... and I expect them to be lived up to."

But the wider cultural issues this all points to, and the systemic sexism that remains in the country's parliament? Not a mention.

We wonder what the Liberal women's WhatsApp thinks about Tuesday's fallout.

J
joeysw 2 years ago
Reply
Upvote
2 upvotes
I don't often agree with ScoMo, but this is one time I will. The term "Bonk Ban" completely diminishes the seriousness of the alleged behaviour engaged in. He didn't speak *for* Minister Rushton, he interrupted to make a point. If the recipients of these men's advances were not welcome and/or their interest not reciprocated, it would be an example of sexual harassment, or potentially sexual assault.
R
rush 2 years ago
Reply
Upvote
5 upvotes
@joeysw and he could have made that point after she'd spoken, too.
C
cat 2 years ago
Reply
Upvote
4 upvotes
@joeysw yes, clearly it should be called JobCreeper or something. Scotty would never reduce a serious issue to a lame marketing slogan.
J
james b 2 years ago
Reply
Upvote
1 upvotes
@cat "JobCreeper" lol. That's actually pretty clever :)
G
gypsy 2 years ago
Reply
Upvote
@rush  ABSOLUTELY
R
rush 2 years ago
Reply
Upvote
5 upvotes
She's probably the wrong person to be asking, really. Especially at a public press conference like that. She's a minister, she's standing right next to the PM, she's hardly going to say "It's changed nothing, they're all still a pack of sleazy hypocritical pervs", is she? Ask some of the lower ranked women, in private, and see what the answer is.
News
General
Opinion
True Crime
Politics
Sport
Explainer
Entertainment
Celebrity
Reality TV
Movies
TV
Books
Rogue
Royal
Lifestyle
Beauty
Fashion
Weddings
Home
Wellness
Health
Fitness
Travel
Food
Family
Before The Bump
Pregnancy
Baby
Kids
Teens
School
Parent Opinion
Work & Money
Money
Finance
Career
Lady Startup
Relationships
Sex
Dating
Separation
Friendship
Family
Real Life
Couples