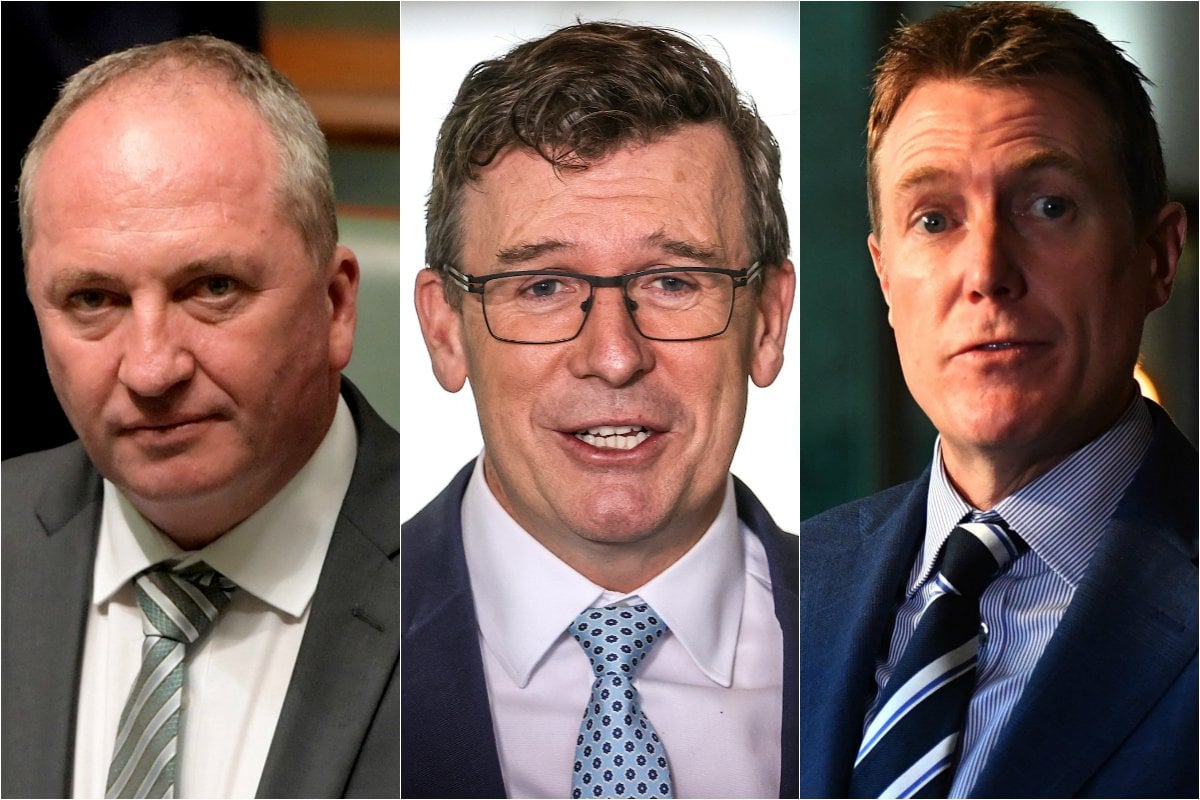 Update: Since the publication of this piece, Attorney-General Christian Porter has identified himself as the cabinet minister at the centre of a historical rape allegation. It came after Prime Minister Scott Morrison was sent a letter alleging rape by a senior minister before he entered politics. Porter denied the allegation and said he would not step down from his position.

In November 2020, Four Corners laid bare the alleged inappropriate conduct of two federal cabinet ministers, highlighting what the programme called sexist attitudes held by certain men in Parliament towards women in the workplace.

Whilst Attorney-General Christian Porter and Urban Infrastructure Minister Alan Tudge have both spent their careers publicly espousing family values, their alleged behaviour in the corridors of Canberra suggest otherwise.

As former Prime Minister Malcolm Turnbull told journalist Louise Milligan, “Some of the most trenchant opponents of same-sex marriage, all in the name of traditional marriage, were at the same time enthusiastic practitioners of traditional adultery.”

Also mentioned in the program was former Deputy Prime Minister Barnaby Joyce, whose extramarital affair with a parliament staffer - seen as hypocritical at the time due to Joyce’s staunch opposition to same-sex marriage - triggered a ‘bonk ban’ in parliament.

So what exactly were these men doing privately, as they publicly preached the importance of traditional families? 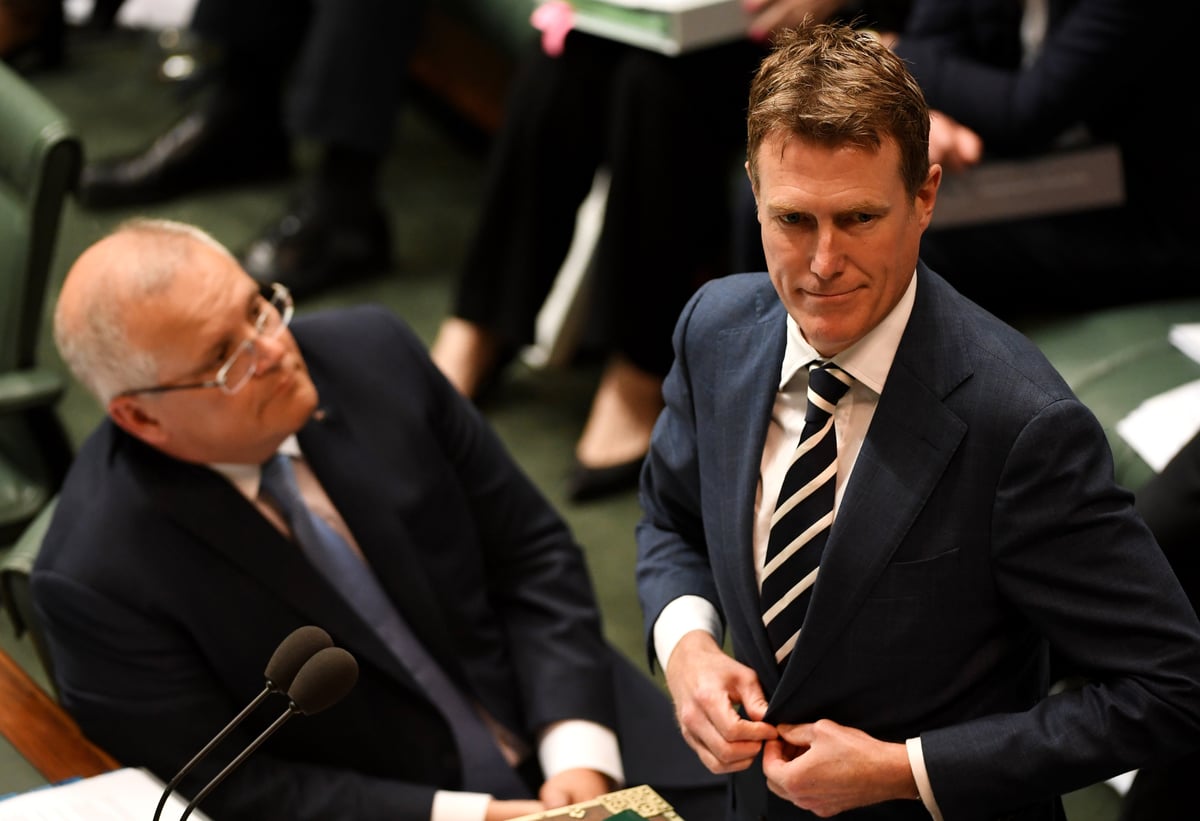 In 2018, when asked by Leigh Sales on 7:30 if the Liberal Party has a problem with sexism, he responded:

"I've got a daughter; I'm married to a lovely person who's a lawyer and has been involved in male-dominated professions for a long time. So it's something that's constantly on your mind, and it's something that I talk to my staff about and that from time to time, of course, is a subject matter of conversation with your colleagues. But this is about every individual, I think, holding themselves to high standards and, as I say, I think that there probably is room in politics to be a bit kinder to each other."

Porter at the time was married to his second wife Jennifer Porter, although he announced their separation in January last year. 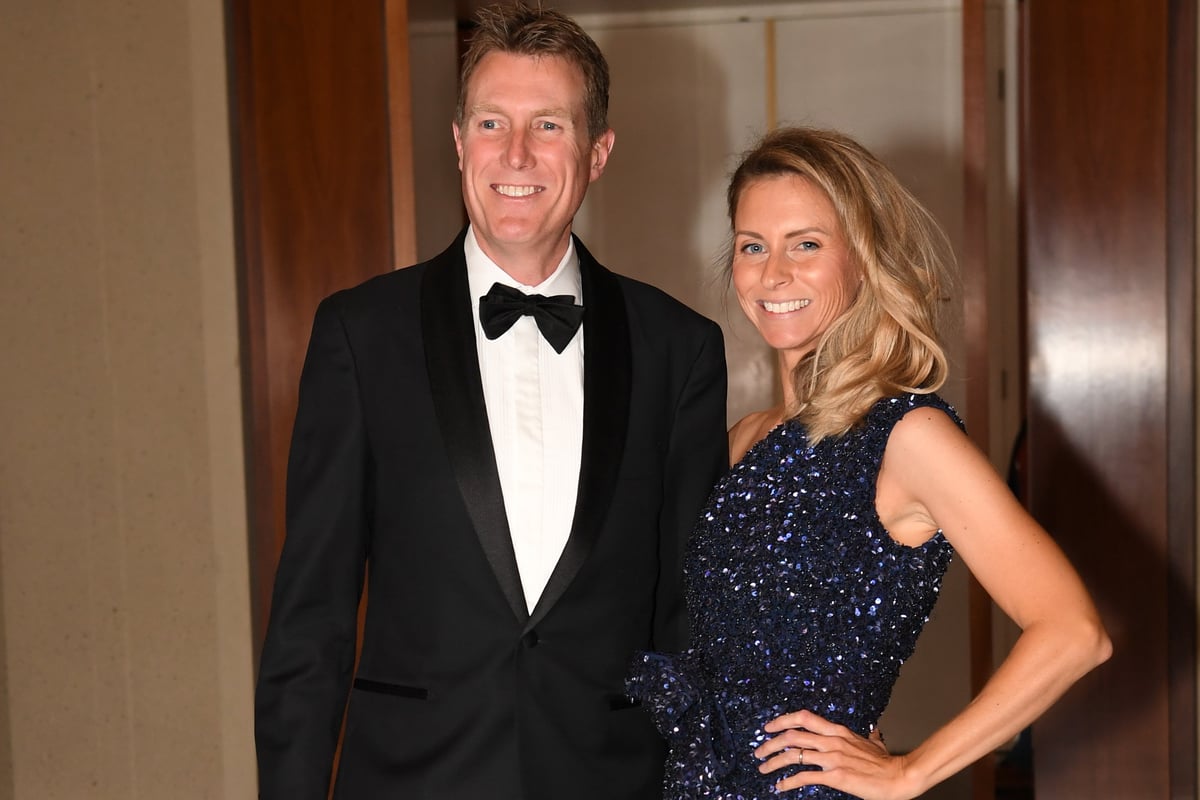 Despite his public comments, Four Corners’ investigation suggested Christian Porter was involved in “inappropriate conduct” with a young staffer.

In a statement following the program, Christian Porter said he “rejected as totally false” the claims made and condemned the “defamatory nature” of the investigation.

Other allegations against Porter include public drunkenness and "deeply sexist and actually misogynist" treatment of women. The claims go back to when he was a debater at university, and while he was a Crown prosecutor in WA.

Barrister Kathleen Foley knew Porter from the age of 16, when he coached her in debating at the University of Western Australia. She later worked as a WA state solicitor when Mr Porter was a WA Crown prosecutor.

"For all of that time I've known him to be someone who was, in my opinion, based on what I saw, deeply sexist and actually misogynist in his treatment of women, in the way he spoke about women," Foley said on Four Corners.

"They were treated as a joke; they were objects of ridicule. The only point to women, as far as I could tell from Christian's way of treating women, was for him to hit on them, or for women to be made fun of, particularly for the way that they looked."

Foley said Porter's behaviour remained consistent after university and into his thirties.

"I remember him commenting that he would never date a woman who weighed over 50 kilograms," she said.

"That stood out to me. I also remember a relationship of his that ended and he commented that the woman involved was thin enough, but she didn't have big enough tits, and the next woman that he was going to date needed to be as thin, but have bigger tits."

Porter went on to work as a lecturer at the University of Western Australia, and former students told Four Corners they recalled him making sexualised comments about female students. They also claimed he gratuitously focused on violent and sexually graphic material. 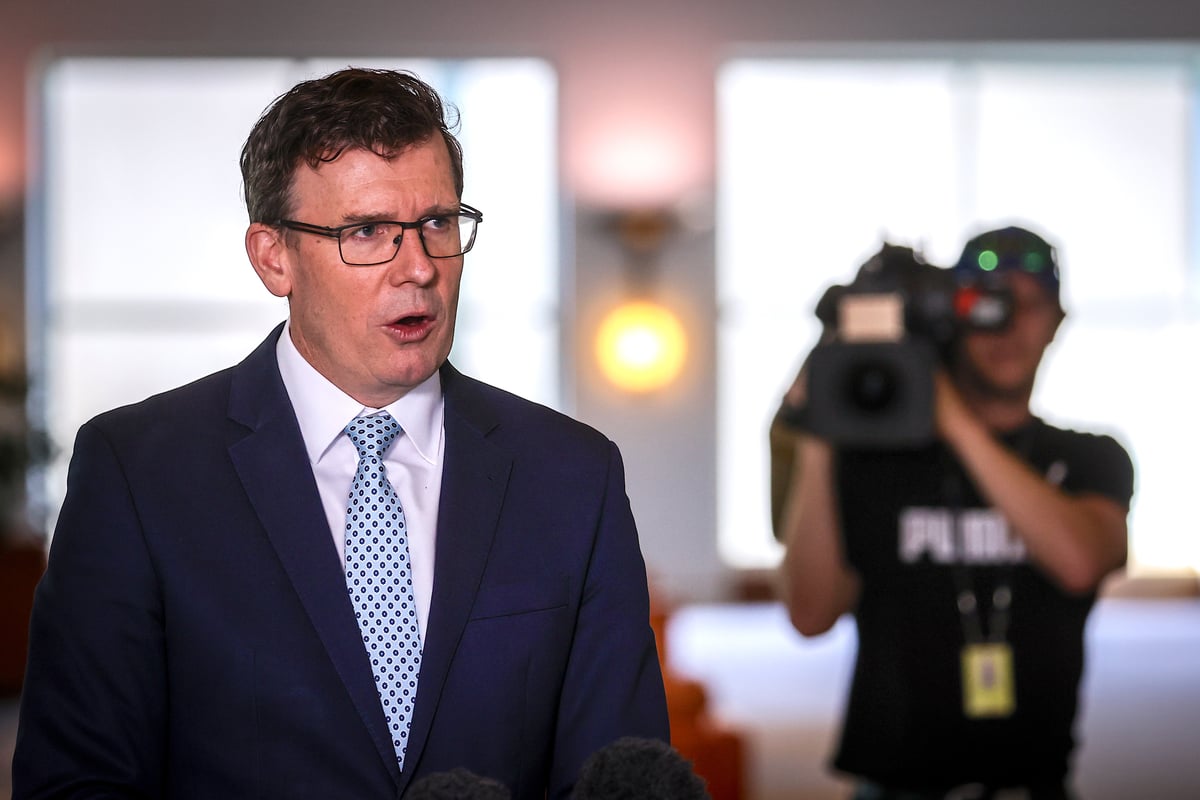 Alan Tudge, now-Acting Immigration Minister, was one of the Liberal Party’s most vocal advocates of traditional marriage in 2017 during the same-sex marriage debate.

In December that year, Tudge – then Minister for Human Services – said:

"My reservations about changing the Marriage Act to include same-sex couples was my view that marriage is an institution that traditionally has been primarily about creating a bond for the creation, love and care of children. And I was concerned that if the definition is changed to be purely one about recognising love, rather than a foundation for the raising of children, then the institution itself would potentially be weakened. I hope I am wrong. I hope that, by expanding the definition of marriage to include same-sex couples, the institution of marriage will be strengthened. My hope is that more couples will take advantage of it, make life-long commitments, and that their relationships will prosper.”

Tudge was married with children at the time of that speech. As has now has been revealed, he was also in an affair with his press secretary, Rachelle Miller, who was also married with kids.

Whilst the affair was consensual, Miller says she now regrets it.

"Where there's significant power imbalances with senior ministers and perhaps junior staff, I think that absolutely there needs to be an acknowledgement that that sort of behaviour is not OK.”

She also explained that during the same-sex marriage debate, it “really upset” her to talk about his apparent family values.

In response to the ABC’s program, Tudge said: "Tonight, matters that occurred in my personal life in 2017 were aired on the ABC’s Four Corners program. 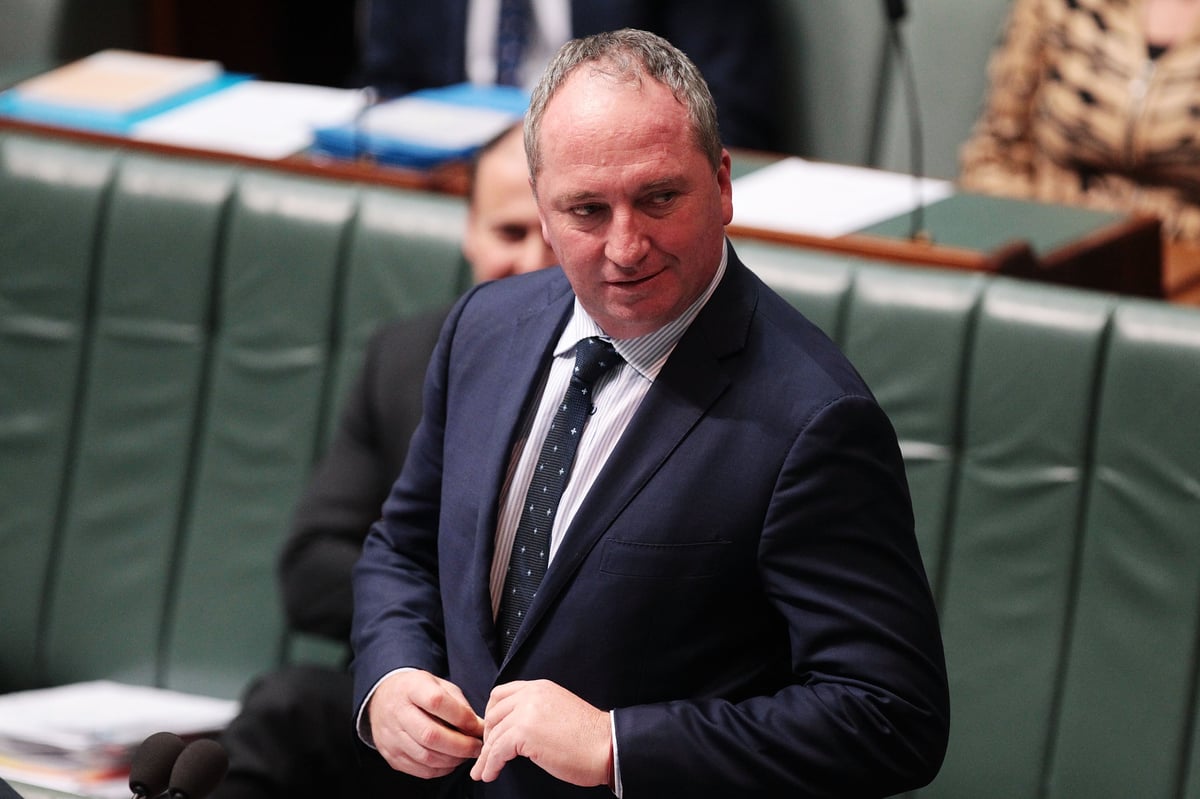 The program also briefly mentioned Barnaby Joyce, the former Deputy Prime Minister under Malcolm Turnbull. A substantial pillar of Barnaby Joyce's ‘political life’ was his vocal opposition to same-sex marriage in Australia, particularly in 2017 during the public debate.

Joyce alleged the legalisation of same-sex marriage would degrade and weaken an institution that was founded on traditional ideas of love.

In 2011, he claimed that his four daughters would be negatively affected if same-sex marriage was legalised.

"We know that the best protection for those girls is that they get themselves into a secure relationship with a loving husband and I want that to happen for them," Joyce said. "I don't want any legislator to take that right away from me."

In 2015, he told ABC’s Insiders: “I don’t believe we should be redefining marriage. Marriage for me is in the traditional form.”

It wasn't long after that the 50-year-old started an extramarital relationship with his former staffer, then-33-year-old Vikki Campion. In 2017, Joyce confirmed he was separated from his wife, Natalie Joyce. Early the following year, The Daily Telegraph published images of a pregnant Vikki Campion.

He was widely condemned for the “profound hypocrisy” in his public versus private life.

Former Prime Minister Malcolm Turnbull explained why, in these instances, the private conduct of these ministers is a matter of public interest: “No one is conscripted to be a politician or a minister. If you choose to take on a position like that, you have to recognise that your private life is going to be perhaps more circumspect than it might have been if you were in a different line of work”.

The former Prime Minister also told the program: "Ministers should be very conscious that their spouses and children sacrifice a great deal to support their political career, and their families deserve honour and respect," he said.

"Politicians are entitled to private lives, of course they are. But in the workplace, they should, and in public, they should hold themselves to a really high standard.”

You can watch the Four Corners investigation here.

Reply
Upvote
2 upvotes
"We know that the best protection for those girls is that they get themselves into a secure relationship with a loving husband and I want that to happen for them," Joyce said. "I don't want any legislator to take that right away from me."
OMG, those poor girls,  what an awful role model they have.  Woman don't need a man to ensure they are "secure ", funnily enough, we can have careers and look after ourselves!
L
laura__palmer a year ago

Reply
Upvote
2 upvotes
I just marvel every day at what we accept as leadership in this country.
J
james b a year ago

Reply
Upvote
1 upvotes
@laura__palmer So what? Human beings? Not some kind of perfect robot automatons without feelings or emotions?
R
rush a year ago

Reply
Upvote
2 upvotes
@james b we don't expect perfection, but we do expect people who aren't hypocrites. Don't tell an entire group of people that them being allowed to marry will damage the entire institution of marriage while cheating on your wife!
C
cat a year ago

Reply
Upvote
2 upvotes
@james b misogynist, lying hypocrites. There are plenty of humans who aren’t sexist, don’t abuse their power and live by their morals. There are even some men like that!! And they can have emotions too, they just don’t confuse emotions and their own arrogance and lust.
L
laura__palmer a year ago