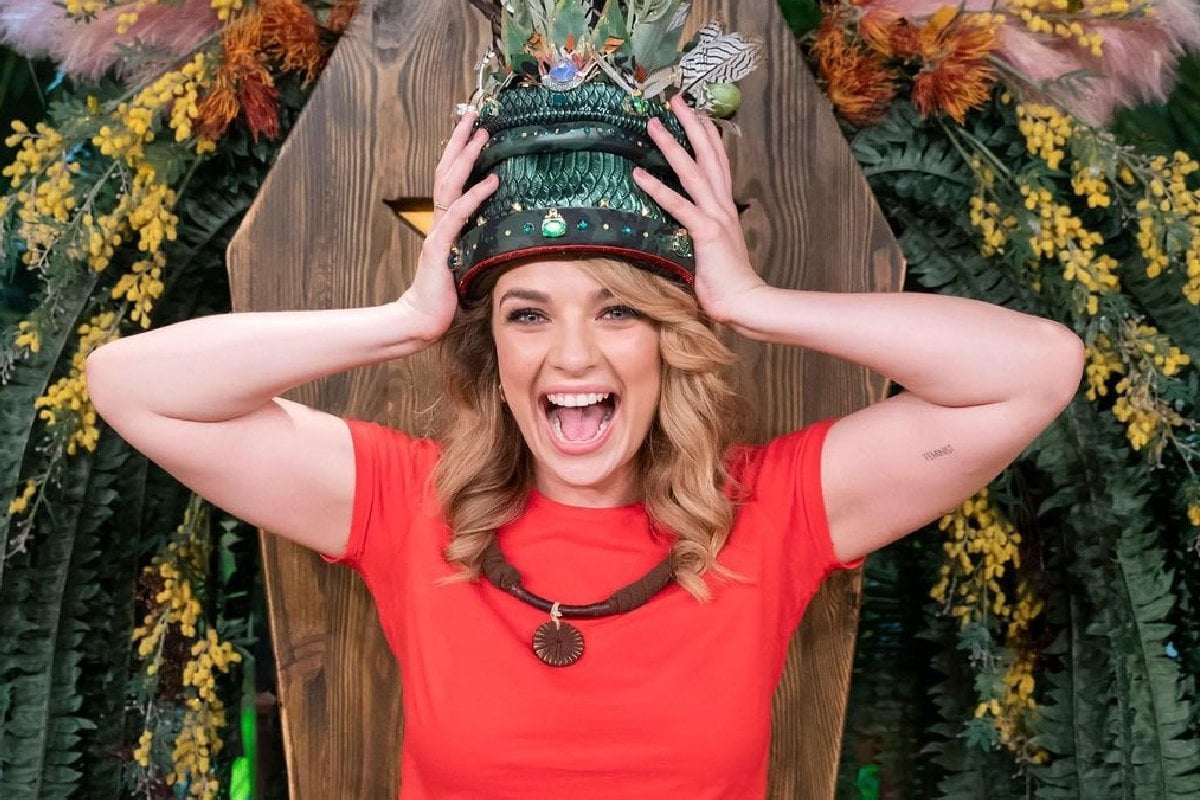 A beaming Abbie Chatfield is spending her day speaking to journalists, radio presenters and TV hosts around the country after she was crowned the winner of I'm A Celebrity Get Me Out Of Here on Sunday night.

Seven finalists were whittled down to two during the grand finale, with the 2019 Bachelor runner-up crowned Queen of the jungle over TV and radio's Grant Denyer, winning her $100,000 for her chosen charity Dementia Australia.

"Crying in the toilets while writing this. I am so eternally grateful to everyone who voted for me and has supported me," she wrote after accepting her crown.

Watch: Abbie being crowned winner of the jungle. Post continues after video.

To her fans, this is the 25-year-old's redemption story. But it's become obvious in the past 24 hours that to large sections of the media and the public, this is just another opportunity to spew hatred and dislike at a confident woman who isn't afraid to tell us who she is.

A quick glance at the social media commentary from viewers, and while there's plenty of Abbie well-wishers who are ecstatic with her win, there's just as many people telling her that she "rigged the vote by encouraging her fans to vote", or that she is "gross", "bogan", and "vile".

On her winner's post on Instagram, Abbie had to take time out of her celebrations to write: "Any negative comments are getting straight up deleted. Not letting you ruin this for me."

All because she dared to win a reality TV show voted for by the Australian public.

We've seen time and time again how reality TV's 'villain edit' leads to bullying and cruelty. Abbie's spoken openly about how damaging it can be.

But in the wake of the I'm a Celebrity finale, it's not Channel 10 producers peddling the villain edit. Instead, it's news headlines.

'Abbie's final desperate attempt to get votes,' reads one story, implying that it's somehow shameful that Abbie wanted to win.

'I'm A Celeb fans claim Toni Pearen was 'robbed' after Abbie Chatfield wins,' reads another, which goes on to exclusively report social media comments from people who say Abbie didn't deserve to win.

It's a tone uniquely reserved for women who won't be quiet and submissive, and it works because Abbie has been groomed to continue her role of 'villain' ever since her time on The Bachelor.

In 2019 we watched Abbie get the 'villain edit' on Matt Agnew's season of The Bachelor, with internet trolls and fellow contestants despising the Queenslander for her sexual confidence. Apparently Australia wasn't ready to accept a woman talking openly and candidly about her desires.

She wasn't afraid to tell Matt what she liked, what she wanted, and who she was. And all Channel Ten production had to do was lean into the narrative that there was something fundamentally 'wrong' with that.

Abbie was mercilessly trolled both in the mansion and on the internet for the entirety of the season. Ultimately, Australia watched her unceremoniously dumped on a rock in South Africa as Matt chose Chelsie McLeod as his winner.

Abbie has never taken the bullying lying down. From the very start she called out the double standards, the hypocrisy, the editing tricks and the death threats publicly, earning herself a fierce and loyal following on her personal Instagram account.

But that doesn't mean she wasn't terrified.

"F**k you if you've ever messaged anyone something even close to this," she wrote on Instagram last year alongside a slideshow of messages she'd received of disturbing threats, vile comments and ridicule.

"Am I grateful for The Bachelor? Yes! Does ANYTHING anyone does on these shows warrant this? F**K NO. These are just 10 of the messages I've saved over the last year. Threats of violence, name calling, threats to my safety and general snide comments still happen a year on," she added.

In July 2020, Abbie returned for Bachelor in Paradise, where Australia watched her get rejected again. She went into the experience openly voicing her interest in one person - Ciarran Stott, from Angie Kent's season of The Bachelorette.

"Abbie always gets what she wants," cast members were filmed saying from episode one, bringing up how she would use her sexuality to "make sure of it". That's despite Ciarran ditching Abbie to pursue multiple other possible love matches, with none of the same vitriol.

After being kicked out of Fiji after just three days, Abbie told Mamamia she had "a folder ready on her phone, ready to screenshot and shame BIP trolls".

Shamed, again, for being a confident woman who told us what she wanted.

When Abbie entered the jungle in 2021, Australia, and Abbie, watched on as Ash Williams told his camp mates he regretted letting Abbie into his sleeping bag once he found out Alli Simpson, who he regarded "more my type", had entered the jungle.

Ash was called out for the comments, but it didn't stop Abbie from also being trolled for getting into his sleeping bag in the first place. 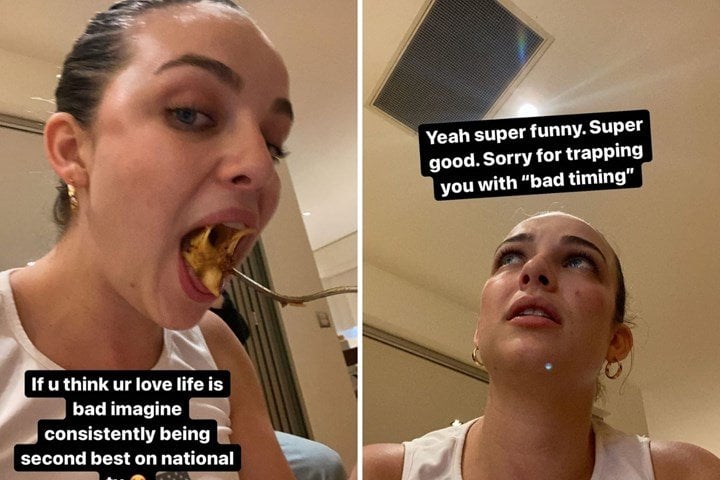 Abbie watched the hurtful comments with the rest of Australia. Image: @abbiechatfield.

Amongst the trolling and the hate, Abbie has powered on, creating her own brand.

She has a popular podcast, It's A Lot, in which she explores sexuality, sex and body confidence - all things her detractors have tried to silence her for.

On Sunday night, the adoring audience she's built helped her to victory.

Her first victory on reality TV. Her redemption story after enduring 18 months of hate and having her heart broken three times on national TV.

Finally, it was Abbie's turn.

But instead of celebrating a well deserved win, Australia has once again turned on Abbie because reality TV gave them permission to do so all the way back in 2019, when she was served up to viewers as a villain.

We were taught to hate her by television producers who played into a backward societal trope that confident, outspoken women are not welcome in our lounge rooms.

And apparently that's a label Australia isn't willing to let her shed, even when she's finally celebrating.