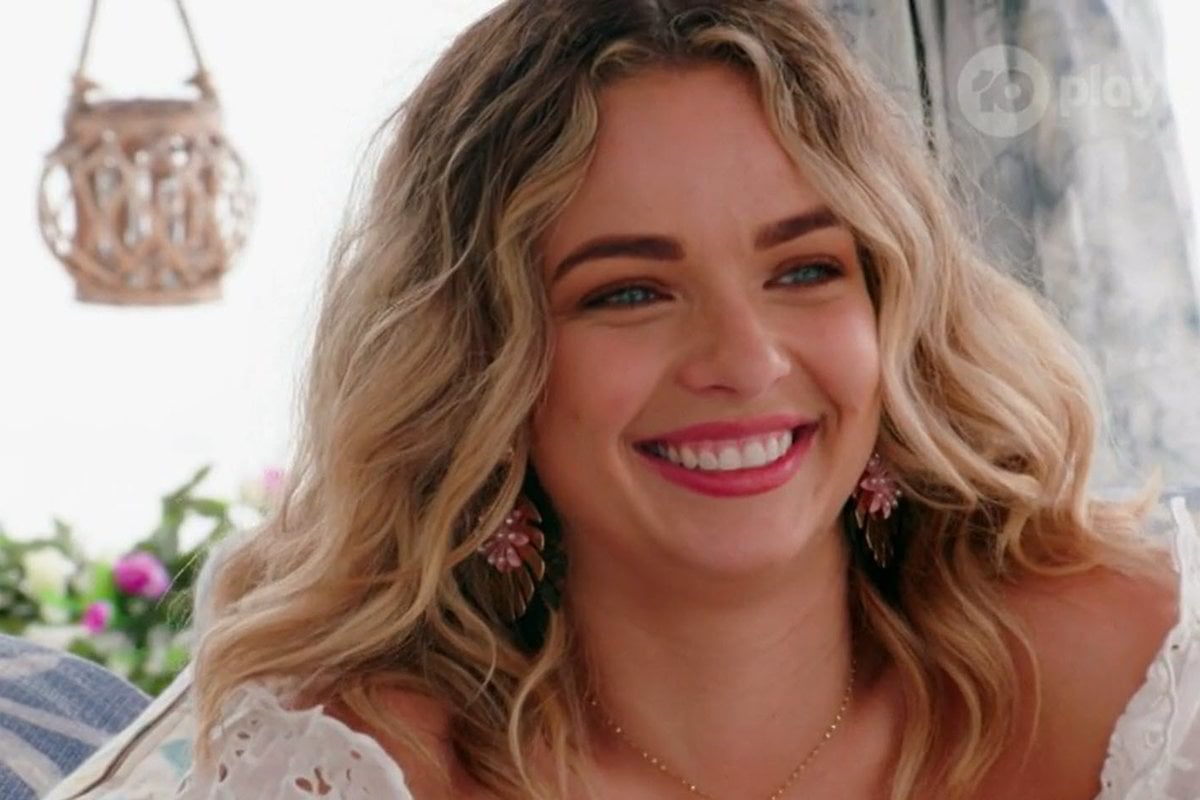 Abbie Chatfield was open and honest about what she wanted on Bachelor in Paradise: Ciarran Stott.

She was in Fiji because she, like precisely all of us, had taken a shine to a long-haired British man from Angie Kent's season of The Bachelorette and she was down to get to know him.

Makes sense. What also makes sense is that Ciarran was fairly popular with the women in Paradise. He had a couple of options, and he was exploring them. Fair enough!

As Abbie made attempts to get to know the man she wanted to, other women on this year's show took notice. And honestly, it came across a little 'shamey'.

"Abbie always gets what she wants," cast members repeated, bringing up how she would use her sexuality to 'make sure of it'. It was a similar narrative to the one Abbie faced throughout her time on The Bachelor, which saw her labelled the villain not only by viewers but also by others in the mansion.﻿

Speaking to Mamamia following her elimination from Paradise on Thu﻿﻿rsday night's episode, Abbie questioned the narrative her cast mates seemed intent to pursue.

"I think I remind them of someone in high school," she explained.

"A girl they were intimidated by, I hate saying this but a girl they were jealous of or something. They're like 'she's the girl that would steal my boyfriend', and they say things like they think I get what I want. They don't know me outside of The Bachelor, and I got further than them. They think I manipulated Matt [Agnew, last year's Bach] into getting what I wanted, but I didn't.

"They assume ill intent I think, which is really disappointing."

STILL BANNED FROM TINDER! @bachelorinparadiseau journey is over but at least I can let you know ya girl is single and ready to mingle. Thanks for all the amazing messages. This experience was SO different to the last, and I could cry thinking about all of the incredible support I received this time around. Please remember to be kind to all the cast this year, despite what you think they have done, and enjoy the entertainment! Love you all. Podcast on my thoughts in about a week. 🌹🥰❤️💋 this lil beluga 🐳 is okay and will forever 👁👄👁

It also points out a double standard that still exists; that we're still not comfortable with a woman expressing her sexuality in the same way we are a man.

We're only two episodes in, but so far Ciarran hasn't copped any negativity from the rest of the cast for openly exploring connections with multiple women.

"I think Ciarran agrees with this as well," Abbie said of the hypocrisy.

"It's ridiculous, Ciarran got with three women which he should be allowed to do, it's a dating show. He can do what he wants, and we had no emotional connection. He hadn't kissed Cass, and he liked Jess, he can do what he wants. But I should also be able to like one guy and be able to kiss him and not be shamed for it by the other women and Australia.

"Timm and Britt had a lovely romantic bath, does she get sl*t-shamed? No? Why is that?"

Abbie was only in Fiji for three days and upon reflection, she said she wasn't ready for another reality TV experience. The show was filmed in November, about two months after The Bachelor finale in which Matt, as she described it, "dumped her on a rock in Africa" aired on TV.

Don’t talk to me or my son ever again

She thought she was fine, but the experience brought up emotions she wasn't expecting.

"It's not anyone at Ten's fault, but it was quite triggering for me and I don't think I was quite ready to go back into that environment, emotionally, from the trolling but also from getting over Matt still," she said.

"So that was difficult. Having it airing, I was very anxious about all the trolling that was going to happen. I think I should've waited another year.

"You know when you think you're okay, but you're really not? I thought I would be totally fine going to Paradise, why would I not be? Then I go in and I'm like 'Oh, no I'm not' but then I'm already in here and crying about Matt Agnew in the mornings - like what is happening?"

"Seeing producers, like Matt's producer was there, and I was like 'Oh my god, the last time I saw you...'."

But hey, that was nine months ago. A lot has happened since then.

There's been a global pandemic, bushfires, and lots happening in Abbie's personal and professional life. She started a podcast called It's A Lot with Abbie Chatfield and briefly (and secretly) got back with an ex-boyfriend. She's planning to give followers a full rundown on the parts of her life she had to keep hidden until Paradise aired in a pod episode sometime soon. But for now, she wants people to know she's doing absolutely fine.

She had a folder ready on her phone, ready to screenshot and shame BIP trolls. Thankfully, this time around, there aren't many.

"It's lovely for me and I think the best part about it is I think women in the next season and following seasons may not get treated as harshly as I did,﻿" she said.

"I think it was not only about me, but it was about other women not getting sl*t-shamed if they are a similar character to me which I think is the most exciting part. I hope the energy keeps up after Locky's season [of The Bachelor, airing later this year]."