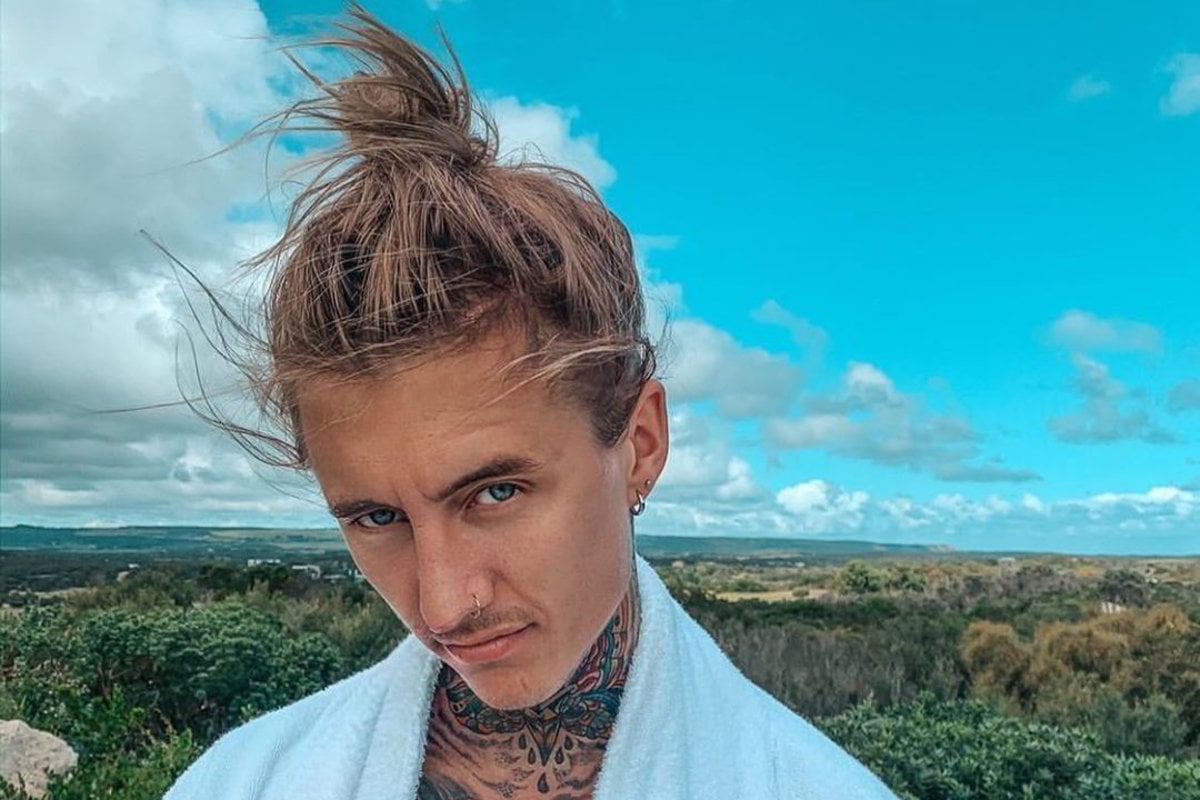 Ciarran Stott has copped a lot of flak recently following the airing of Bachelor in Paradise, but even he was surprised by the most recent stream of negative comments flooding his social media.

Earlier this week, Ciarran and his Paradise cast mate Matt Whyatt announced a charity boxing match, with the intention of using the buzz around their reality TV 'beef' to support a series of charities.

On the show, the pair butted heads as Matt dated Ciarran's ex-girlfriend Renee Barrett, ﻿﻿though Ciarran told Mamamia the editing blew it out of proportion and now the men are on better terms.

The announcement, in which Ciarran said his chosen causes were domestic violence and men's mental health, received backlash almost instantly on social media with many linking the choice with what they saw play out on their TV screens.

"For someone like me it's very close to home. I've lived through it; I've watched my mum and my sisters and my family live through it so it kind of sucked when p﻿﻿eople were saying that to me.

"The messages were like 'you shouldn't raise money for this, you're the cause of this, you are a domestic violence case waiting to happen'. You people don't know me, you literally don't know me, how can you say that?"

Speaking to Mamamia, Ciarran recalled how as a young child in the UK, he would spend weekends with his grandma.

Come Sunday afternoon, he'd be dropped back off at his mum's house, where he lived until moving to Australia with his dad as a 12-year-old.

But often, his mum wouldn't come to the door to greet him.

"I'd just have to say goodbye to my grandma and go in," Ciarran said.

"And I'd see my mum's got two black eyes or a fat lip, and there would be an excuse straight away from the partner she was with at the time.

"It just kept happening and happening, and I'd see arguments where he would grab my mum and slap her about, and I could never do anything in defence because I was a kid."

Besides that, Ciarran also learned about more abuse faced by family members when he turned 18. By this stage, he'd been living in Australia for five years.

"I was shocked. I was like 'How come you never told me?' and I was blaming myself for a lot of things that happened. [His mum] said 'How can you blame yourself? You were a little boy, what could you have done to grown men?' There was nothing I could've done.

"Looking back on it now, I wish I could go back in time and give them a slap, but I know I can't do that and I know it's not the right thing to do to fight violence with violence. But people want to defend their families."

The intention of the boxing match was to turn his controversial reality TV experience into a positive by raising money and giving a platform to important causes close to his heart, but social media wasn't so supportive.

"My mum dealt with it from loads of the partners she was with, right through my childhood," Ciarran said, also recalling times he and his cousin were locked in a room while female family members were abused nearby.

"Both our mums were getting slapped about by their partners, and I always thought I would never want to be that kind of guy. It's so close to home for me, and that's why I want to bring attention to it."

Neither he nor Matt are boxers, and he's quick to say there is no bad blood between them: "It's not like we're fighting to the death".

For Ciarran, 2020 has been a pretty weird year. There's been lockdowns and a pandemic, but also the added pressure of having his personal life play out in front of us all.

He said he was learning from those mistakes, but remained critical of the Paradise editing which he said made it out to be someone he wasn't. Viewers turned on him - previously a fan-favourite during The Bachelorette - and his Instagram DMs became a toxic place.

"I've had to block that many people, delete so many comments. My inbox is just full of stuff, people tell me ‘If I see you on the street I’m going to kick your head in'," he told Mamamia.

"I've got friends, males, who have taken their lives before. I've got friends who are dealing with mental health issues and I’m a person they’ll ring up and say ‘Can we just have a chat?’.

"I tell all my friends, anytime of the day or night you need to ring me, ring me, because I’d rather hear about the problems then hear about a bloody funeral."

As Paradise aired, he found himself having to take his own advice.

"I felt like the world was closing in. Was anything going to go right for me this year?" he said.

"I'm in COVID, I'm in lockdown, the show's happening, I'm copping all this; there were times where I was like, 'this is not good', I felt like I was getting pushed closer and closer to breaking point."

He's thankful for a strong support network of friends, family and colleagues at Team Ellis Boxing, who helped him see the way forward.

"My dad was like, 'you are very open and honest and transparent with everyone, and just because they didn't show it, we know who are you so don't worry about it;. As soon as I had that chat with my dad, as soon as I did feel like something was a bit hard, I would ring or Facetime him, or my family in the UK."

⭐ WHO'S YOUR PICK!? ⭐ - - After their heated exchanges on @bachelorinparadiseau , @ciarranstott and @mattwhyatt are settling their on-screen TV beef in the ring- in a full-contact, scored boxing bout at the home of Australian boxing, the Melbourne Pavilion, on Team Ellis Boxing's show! - - To fight alongside stars from @bigbrotherau , @loveislandau and @bacheloretteau register here ➡️ Link In Bio 🏠 - - #Boxing #AustralianBoxing #Sport #Athlete #Fitness #BoxingTraining #BoxingHype #BoxingGym #TeamEllis #BoxingNews #celebrity #bachelorinparadiseau #ciarranstott #realitytv #tvstar

Ciarran wants to be part of lifting the taboo around topics like mental health and domestic violence, and said the most important thing we can do is talk about it.

"Me and my friendship group, we're very open to talking about absolutely anything and everything. If something is on one of our minds, we'll say something rather than keep it in.

"I believe that no one should be nervous to stand up or speak up and they should definitely use your voice, use your opinions.

"Hopefully everyone's got that friend or that person in their family they can call on, but if they don't there's numbers out there that they can call. There's always someone willing to listen."

For now, Ciarran is busy training and locking in sponsors for the charity fight night, which will also see other reality TV stars and celebs fight each other for a good cause.

He knows boxing isn't everyone's cup of tea, but he's hoping to move forward with a platform of positivity.

"I feel like the silver lining to all the bad stuff that was portrayed on TV is I’m getting to turn it into something positive," he said.

Reply
Upvote
2 upvotes
Anyone else see the irony in raising money for DV charities... by fighting another guy? A guy you were competing with for romantic partners? I'm sure the intentions are good, but the execution is a bit on the nose for me.
G
gu3st 2 years ago

Reply
Upvote
@rush Can’t we just let the guy move on and do something that he is passionate about? Without all the stupid hate
R
rush 2 years ago