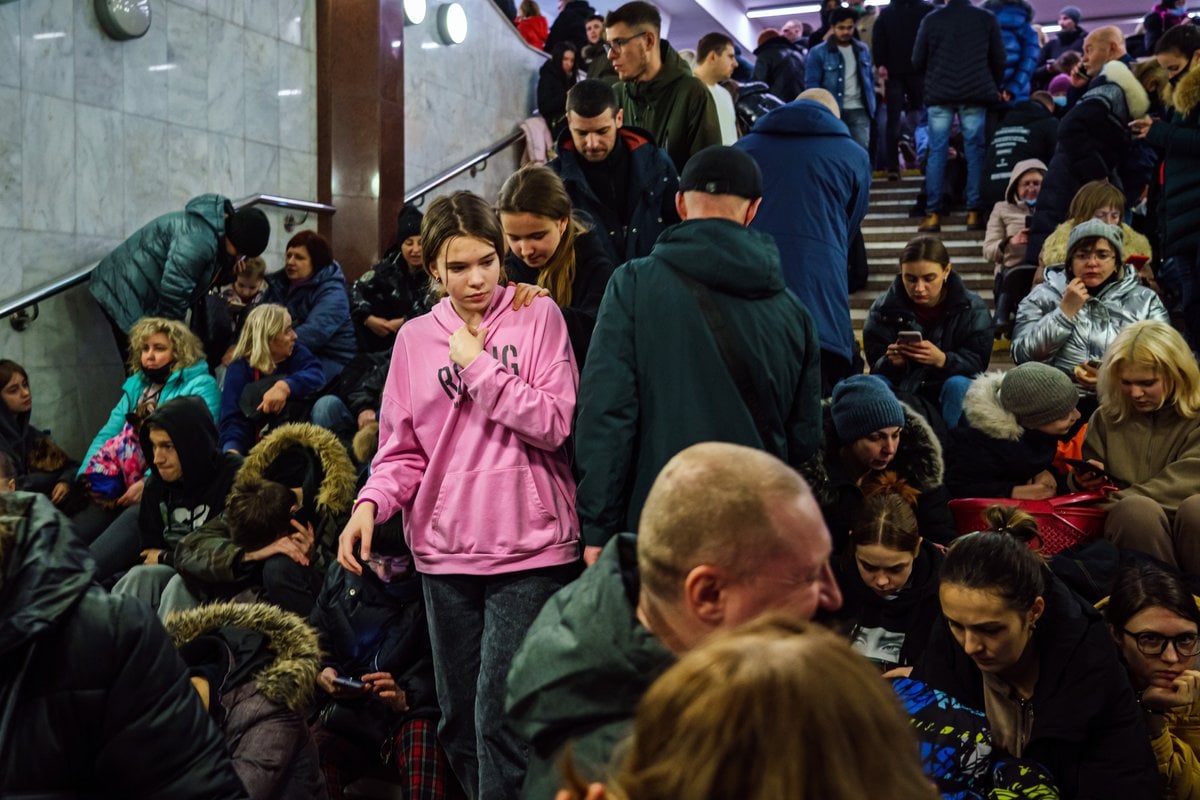 Right now, all eyes are on Russia and Ukraine.

Since then, the world has watched as Russia has launched a wide-ranging attack by air, water and land on Ukraine. An attack which is the biggest on a European country since World War Two.

We've seen world leaders respond with sanctions and speeches, while thousands around the world, including Russians, have taken to the streets to show their support for Ukraine and condemn Putin's military aggression.

But what has the last 24 hours been like for residents in Ukraine?

As the military operation continues to unfold, here's what we know about life on the ground in Ukraine right now.

As Russian forces continue to invade Ukraine, thousands have taken to hiding in crowded metro stations, serving as bomb shelters.

Footage shared on social media shows families, children and their pets huddled up in Kharkiv and Kyiv metro stations with bags, blankets and water bottles as they shelter from Russia's airstrike.

The mayor of Kyiv, Vitali Klitschko, confirmed "metro stations will be available as shelters 24/7".

He also announced a curfew in Ukraine's capital city, which will be in place from 10pm to 7am local time.

"Public transport will not work during curfew," he wrote in a statement.

"We ask all Kyivites to return home on time. If you need to move around the city during the curfew, in particular, as employees of critical infrastructure companies, you must have identification documents."

People in Kharkiv preparing to spend the night inside the metro as battle in the street of the city continues pic.twitter.com/M426LeFizg

In #Ukraine's #Kharkiv, anxious residents flock to the metro station, which doubles as a bomb shelter. pic.twitter.com/EQpNBZqzL9

Families flee their homes and say goodbye to loved ones.

100,000 Ukrainians have fled their homes and are uprooted in the country, the UN refugee agency says.

Groups of people have fled into Hungary, Moldova, Romania and Poland, which is home to the region's largest Ukrainian community.

On Thursday, dozens arrived at the normally quiet Medyka crossing, some carrying luggage and accompanied by children.

Slovak customs officials said passenger cars were waiting up to eight hours at the busiest of Slovakia's three road crossings with Ukraine.

The highways leading out of Kyiv in every direction seem jammed with people fleeing the capital. The roads going toward it… I’ve never seen traffic so light and in some stretches ghostly empty. pic.twitter.com/4C1fgQHK09

At least 10 km long traffic jam at Krakovets border crossing into Poland tonight. All refugees, clamouring to get away from the Russian invasion army. #Ukraine pic.twitter.com/kivGY6yUec

An emotional video circulating online shows a Ukrainian father tearing up as he says goodbye to his daughter before his family appear to set off for a safe zone.

The father, who hugs his daughter goodbye before she gets on a bus, is reportedly staying behind to help fight for his country.

A Ukrainian father says goodbye to his daughter before sending her away from danger. He is staying behind to fight for Ukraine. #RussiaInvadedUkraine pic.twitter.com/rrFO0le4Kf

Men aged 18 to 60 reportedly banned from leaving the country.

While thousands flee to safety, there are reports Ukraine's Interior Ministry and State Border Guard Service has banned men aged between 18 and 60 from leaving the country under the country's newly instated martial law.

The law was announced by Ukrainian President Volodymyr Zelenskyy on Thursday in response to Russia's military operation.

BREAKING: Ukraine's interior ministry bans men aged between 18 and 60 from leaving the country

State Border Guard Service of #Ukraine says that in connection with the implementation of martial law in the country, Ukrainian male aged 18 to 60 are banned from leaving the country

On Thursday morning (local time), air raid alarms could he heard ringing out in the city of Kyiv.

The moment another air raid siren rings out in Ukraine's capital Kyiv as Russia launches a military offensive against the country. @9NewsAUS pic.twitter.com/40AXmo5MwG

That day (around Friday morning AEDT), Russia launched a wide-ranging attack on Ukraine which saw cities and bases hit with airstrikes or shelling.

There was also fighting at Hostomel airport, just outside Kyiv, where Russian paratroopers landed. A Ukrainian official later said the airfield had been recaptured, while a senior US defence official said Russian forces were advancing closer to Kyiv.

At this stage, Ukraine's Minister of Healthcare, Viktor Lyashko, said 57 people have died and 169 people have been injured – including both combat and non-combat injuries.

Authorities in the southwesterly Odessa region said 18 people had been killed in a missile attack and at least six people were killed in Brovary, a town near Kyiv.

An apartment complex in Is devastated by bombardment, south of Kharkiv. Untold number of casualties. pic.twitter.com/jdx4CQdGeK

More than 40 Ukrainian soldiers have been killed and dozens wounded after Russia attacked airports and military installations in Ukraine, according to Ukrainian officials. https://t.co/hBZ9mlihnm pic.twitter.com/hqjnyve691

Reply
Upvote
1 upvotes
"We've seen world leaders respond with sanctions and speeches, while thousands around the world, including Russians, have taken to the streets to show their support for Ukraine and condemn Putin's military aggression."
This will do nothing. Sanctions will only hurt the Russian people, Putin and his government do not care. So Russia will take Ukraine and see this as a green light to start putting the Soviet Union (or a version of) back together.
C
cat 6 months ago

Reply
Upvote
@laura__palmer They knew that other countries wouldn't support Ukraine with a military response, but it's another thing to take on the entirety of NATO. Hopefully even Putin isn't that foolhardy. The tragedy is that he knows he can take Ukraine and if he stops at the NATO boundary no one will really do anything about it, the west are willing to sacrifice it as the cost of peace in Europe.
<
<deleted> 6 months ago

Reply
Upvote
1 upvotes
@guest2 that is literally what I just said, that the Ukraine is not part of NATO.
D
daijobou 6 months ago

Reply
Upvote
@laura__palmer the sanctions can only go so far when much of Europe is totally dependant on Russia for gas supplies. This is part of the reason it is so important Australia and US gets on board with sustainable energy sources. If Australia can start directing more of our bright young minds into this field it will not only save the planet but it will stop our reliance on these totalitarian regimes.
K
km 6 months ago

Reply
Upvote
3 upvotes
This is just heat breaking, makes me feel sick that we still have "leaders" in the world like this Russian criminal.

Reply
Upvote
1 upvotes
@km it's awful. We think of those evil leaders as people from history, we only read about them in books, or watch them in movies. It's frightening to realise that this is really happening right now.
<
<deleted> 6 months ago