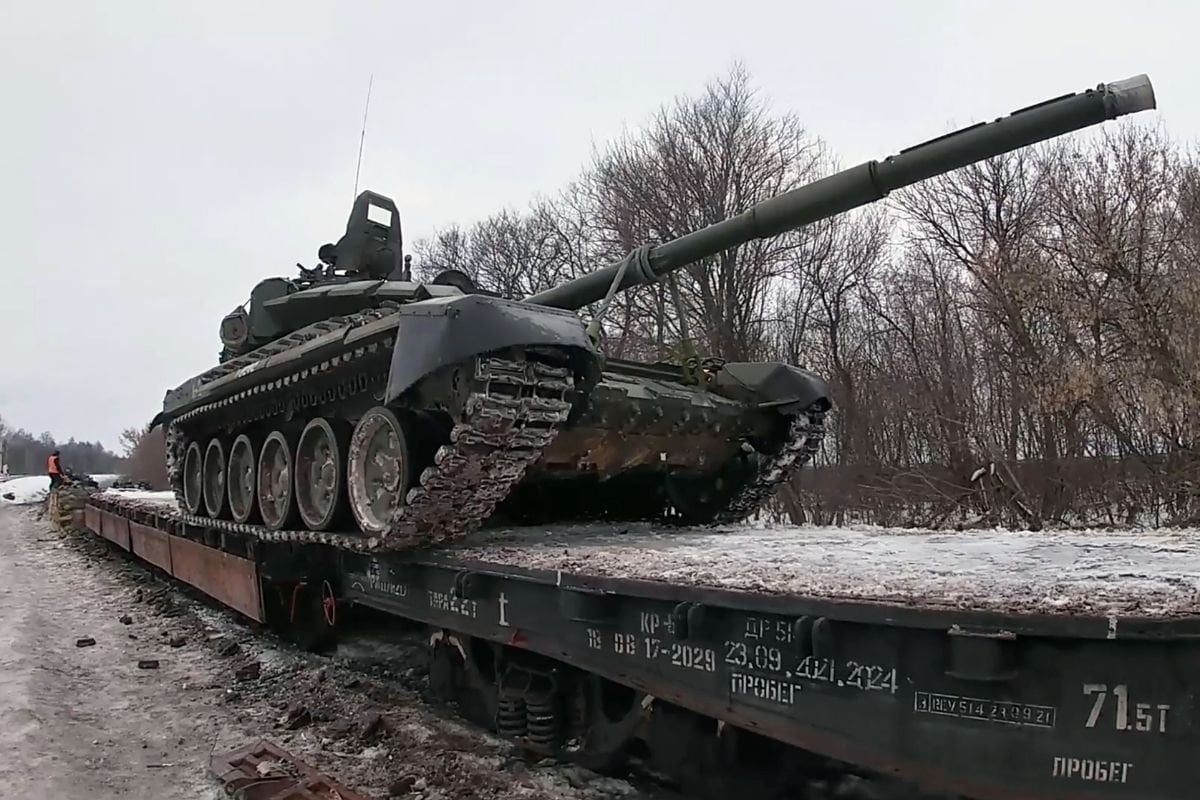 Russia has declared war on Ukraine, with US President Joe Biden confirming, "This is the beginning of a Russian invasion of Ukraine... we still believe that Russia is poised to go much further in launching a massive military attack against Ukraine."

Vladimir Putin recognised the independence of two Russian controlled territories in east Ukraine - a move that gave Russia a reason to openly send troops, even though they've claimed they're carrying out "peacekeeping duties."

America and the UK have reacted by imposing sanctions - including cutting off the Russian government from western financing.

Videos allegedly filmed at the border show weaponry at the ready. Post continues after video.

Prime Minister Scott Morrison also gathered the cabinet's national security committee to discuss the recent developments. Travel sanctions have been imposed, which you can read more about here.

So, as your newsfeeds fill up with the latest developments, let's quickly take a few steps back. Because even though this conflict feels far away - the ramifications of it do trickle back to us in Australia, and as you'll read below; it may very well set a precedent for other conflicts simmering on our side of the world.

But first: What's the historical context for this conflict?

To say Russia and Ukraine have traditionally been joined at the hip is an understatement.

Most Ukrainians also speak Russian, millions of them work in Russia, and families commonly live spread across the two borders.

Their histories are intertwined, with the creation of both Russia and Ukraine coming after invasions by Romans and Vikings, the migration of Slavic people and influence from Eurasia.

There have been wars over this territory for hundreds of years. But it's important to note that 'modern Ukraine' emerged as an independent country after the fall of the Soviet Union in 1991.

In 2014, however, Russia invaded Crimea and annexed the territory with a widely criticised referendum, returning it to Russian rule.

Unrest grew, with military clashes between pro-Russian rebels (backed by the Russian military) and the Armed Forces of Ukraine beginning around the April of that year.

By 2015, Ukraine had suspended its military cooperation agreement with Russia and tensions have continued to rise ever since. The two countries have retaliated against one another with bans on certain imports and the seizure of each other's vessels and troops. Fighting escalated in the first quarter of 2021 when Russia deployed 3,000 troops at the border for large scale military exercises. The provocative move was made in response to the Ukrainian government's crackdown on leading pro-Russian Ukrainian opposition politician – and Putin's dear personal buddy – Viktor Medvedchuk.

Tensions have escalated, and acts of violence have ensued from then onwards. In recent months, pictures have emerged of tanks and other military vehicles being transported to the Ukrainian border. Aerial surveillance of the region shows massive amounts of infrastructure, weaponry, and somewhere in the vicinity of 190,000 Russian troops.

Last week there were reports of shelling in Ukraine and early morning exchanges of fire, and now we have the start of what western authorities are calling an "invasion", with locals noting explosions on the ground in Ukraine.

But what could Russia hope to achieve by invading?

Russia – who is not a member state of NATO (North Atlantic Treaty Organization) – has been seeking a formal guarantee that NATO will never admit Ukraine and other former Soviet states as members, in what The Wall Street Journal is describing as "the biggest standoff between Moscow and the West in years."

Ever since the Soviet Union collapsed, NATO has taken in most of the European nations in the Communist sphere including Lithuania, Latvia, Estonia, Poland and Romania. Ukraine has been in its sights.

(A reminder: NATO is an international alliance that consists of 30 member states from North America and Europe. It aims to guarantee the freedom and security of its members through political and military means.)

But Russia wants to be among the world's great powers and considers NATO's expansion menacing. President Vladimir Putin would consider Ukraine's involvement a big threat.

As John Blaxland, a professor of international security and intelligence studies at the Australian National University in Canberra told Mamamia's The Quicky, "NATO presents a couple of challenges to Russia. One is that it has been really attractive to Soviet-aligned countries in eastern Europe who have all subsequently of their own volition, joined NATO. That is incredibly galling to Putin who has not been prepared to expose himself to the rigours of a democratic election... this is a man who wants to control everything."

Listen to Professor Blaxland chat to The Quicky. Post continues after podcast.

It's also believed Putin wants to reclaim more territories lost at the fall of the Soviet Union... (yes, we're back at that 'wanting to control everything' idea).

Putin considers Ukraine "part of Russia," and an invasion would enforce that.

How would an invasion affect Australia and the rest of the world?

According to the New York Times, military action threatens to destabilise the already volatile post-Soviet region, with serious consequences for the security and structure that has governed Europe since the 1990s.

As Professor Blaxland told The Quicky, if Russia takes control of Ukraine it could "embolden him [Putin] to make more demands, over Latvia, Estonia, Lithuania, Poland, Hungary and Bulgaria."

"These countries don't want Russia," he said. "They spent 55 years under Soviet domination - they don't want that back. That wasn't a pleasant experience for many of them. They have warmly embraced Europe and NATO and that's simply because it's more attractive."

Blaxland says worst-case scenario is, this invasion becomes like a "sucking vortex" and could provide an excuse for other tensions (like those in east Asia) to also spill over.

Our Defence Minister, Peter Dutton, fears a Russian invasion could embolden China and "we should be concerned about that... [as] that provides great instability for the Indo-Pacific."

"What’s at stake is not simply, as important as it is, Ukraine’s territorial integrity, sovereignty and independence; but very basic principles that have, in a hard-fought way – after two World Wars and a Cold War – under-girded security, peace and prosperity for countries around the world,'" US Secretary of State Antony Blinken further warns.

An estimated 4,000 foreign fighters, including Australians, have joined Ukraine’s militias and regular armed forces. Numbers are likely to boom if Russia invades.

But it could also affect daily life here in Australia. Financial Review's economic correspondent Ronald Mizen fears a Russian invasion could push oil prices even higher and lead to global supply issues that will drive up inflation. Further, the price of petrol will surge towards $2 a litre, and the worldwide price of wheat, corn and other food will increase.

This post was originally published on February 18, 2022, and updated with new information on February 23, 2022.

A
anonymous 3 months ago

Reply
Upvote
1 upvotes
Another war caused by testosterone. Haven’t we learnt anything?