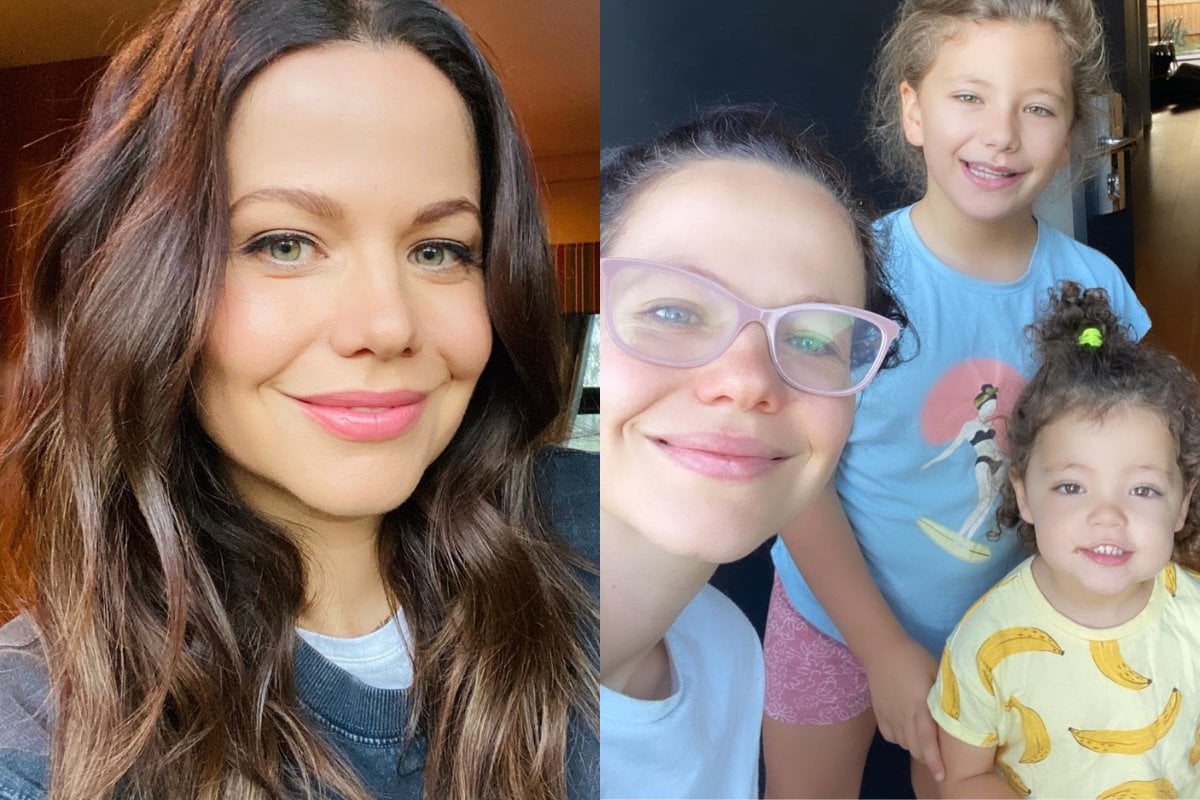 This week, we find out what life is like for Australian actress Tammin Sursok when she's not on set shooting for a movie or TV show.

Tammin Sursok has had a whirlwind two years.

After 15 years living in Los Angeles, Tammin, her director husband Sean McEwen and their two daughters packed up their lives and put everything in storage in late 2020 to move cross-country to live in Austin, Texas.

While on the road, the Pretty Little Liars star got a call from her management company telling her she had been cast in a film in Queensland, and asked whether she wanted to come home.

"I hadn't seen my family in two years, and that was a huge goal for us," Tammin told Mamamia.

In June 2021, the family-of-four quarantined for two weeks in Sydney, before heading to Queensland for Tammin to shoot You, Me and The Penguins.

But while they were in quarantine, the borders shut.

"We couldn't come into Australia for almost two years and then when we did, there was a surge [in Covid cases] and the borders closed the second day we arrived in hotel quarantine," she shared in an Instagram post in December 2021.

"We were in the same state for six hours but were not able to see each other."

Now, one year on, the South African born Australian actress has finally reunited with her parents.

In that time she's also had various projects keeping her busy - from appearing in Stan's Joe vs Carole to partnering with Best&Less to launch a new denim range.

Just last week, Tammin and her family had planned on returning to the States. That was until she and her eldest daughter, Phoenix, 8, contracted COVID.

"We're both vaccinated [and] boosted," Tammin told us.

"I can't imagine what it must be like if it was worse. I'm just happy that we are [vaccinated]."

Pre-Covid, the former Home and Away star never had a "typical day" living in Brisbane.

She was either shooting for a project - most recently appearing on Neighbours - or working and being mum.

When she's not shooting, Tammin's morning starts around 6.30am. Her husband, Sean, is already up with her three-year-old Lennon who wakes between 5.30 and 6am.

They wake Phoenix up at 6.45am, have breakfast together and get her ready for school. Then Sean takes Phoenix to school, while Tammin drops Lennon at daycare, where she goes twice a week.

"The only structure we have is the kids go to school and I like to exercise and move my body in the morning," she said.

Tammin's morning routine is always followed by some form of exercise - whether that's a spin class, Pilates or running at the gym.

"I need to exercise to start my day," she said. "Then it's really anything goes from there."

As it's usually warm in Brisbane, the actress' everyday "style uniform" is generally something light and breathable - her favourite outfit is a flowy dress or her denim overalls.

"I feel young, free and stylish [when wearing them]," she said.

Tammin's workday always changes - whether she's attending a photoshoot, putting an audition on tape, having an interview, a meeting or creating content for social media.

"Normally, on Wednesday, [I'll] create from 10am-2pm and shoot probably five to six videos, back to back... then you've got your content for the week," she said.

Following her workday, Tammin will pick up her daughters from after school care and childcare at 4.30pm. Then they'll all come home and start the evening routine.

"I do the bath, my husband's doing dinner and [depending on] where we're at [in our] work day, we either have dinner together or if we don't, the kids eat together," she said.

"When I have time to, I love to cook," Tammin said, adding her girls are at a stage where they mostly want meals like spaghetti, mac and cheese or fish fingers.

"[Then] we do schoolwork, read a book and they go to bed."

Tammin ends her day with a "really long bath" and some dark chocolate. Then it's back to work until late.

Speaking to Mamamia, the actress explained that because she works between Australian and US time zones, she often works into the evenings and only gets Sundays off.

She falls asleep around 12am either listening to meditation music or watching something.

"I know [people say] 'no devices in bed' but I do feel like if I'm watching something on my iPad it kind of lulls me off to sleep," she said.

"For me I need to not be thinking about work so I [usually] watch something in bed."

Read more A Day In The Life articles here: