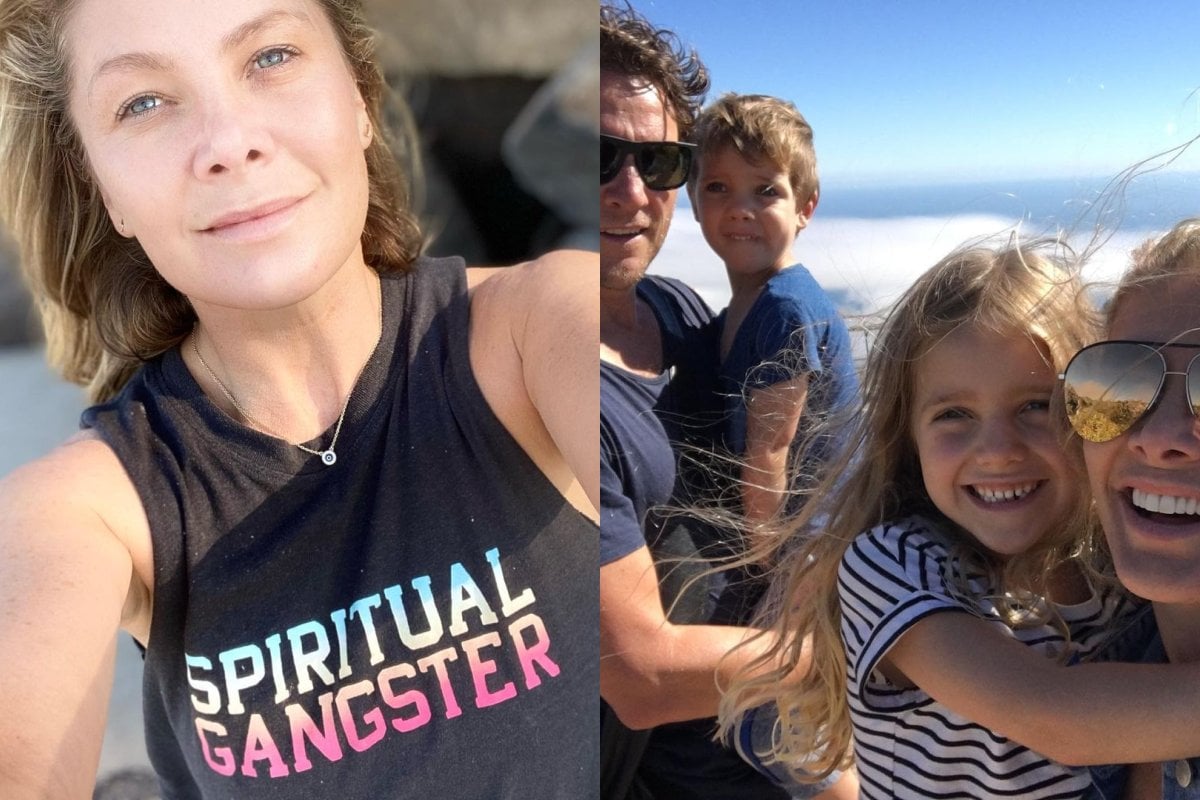 This week, we find out what life is like for singer, actor and presenter Natalie Bassingthwaighte right now.

In February 2020, Natalie Bassingthwaighte swapped out the city for the coast.

She, her husband Cameron and their two kids - eight-year-old Hendrix and 11-year-old Harper - packed up their Melbourne home and relocated to Byron Bay, not knowing that a global pandemic would unfold just a month later.

And they're pretty grateful they made that decision.

"We keep pinching ourselves," she told Mamamia.

Psst, here are things you never say in 2021. Post continues after video.

As someone in the entertainment industry, Natalie doesn't have a "typical" day. Some days she'll be at a photo shoot, while others she'll be hanging at home with her kids. Right now, she's in New York promoting her role in the upcoming Alanis Morrisette musical, Jagged Little Pill.

Speaking to Mamamia before she left, the performer and presenter talked us through what she generally gets up to when she's at her home base in Byron Bay.

Natalie's morning starts around 7am. She gets up, takes their dog Harli out for a wee and then she and her husband get their kids ready for the day.

"My husband and I are very hands-on in the morning so I can't take credit for the whole getting ready for school, lunches and stuff. Sometimes he does it, sometimes I do it," she said.

Then, like most of us, they'll both down a hot beverage to get their days started.

"Generally it's coffee for him, [while] for me, I get hot water with apple cider vinegar and lemon - I find that's really awesome for my digestive system," she said.

While Byron Bay is no longer in lockdown, kids across New South Wales are still remote learning. Before Natalie's kids start class for the day, they all get some fresh air.

"Some of the days which we found the best [during lockdown] were when we went for a big long walk or a bike ride together before we started," Natalie said.

"That ended up feeling much better for their brains to be able to focus."

As a rule, Harper and Hendrix "don't do any devices from Monday to Friday," Natalie explains.

:A few years ago we [also] started no TV in the morning before school because we felt like that started their day in a really different way and they weren't motivated."

At 9am, when the kids start school, Natalie and Cameron start their workdays too.

Natalie is lucky enough to have worked consistently throughout the pandemic, while many of her colleagues and friends in the entertainment industry have been hit hard by production halting.

"Work's been so bizarre. I mean our industry has literally shut down from day one and hasn't really recovered," she said.

"I have so many friends that are right in the middle of [a] show, the show's stopped and they've basically been unemployed for months and months. It's been horrific.

"Me personally, I definitely have my days where I've struggled not having energy or focus. I try to be as positive as possible so most of the time I've been okay, and I have had work that has somehow universally woven in and out of this mad COVID time," she said.

Last year, Natalie appeared in Baz Luhrmann's upcoming film, Elvis, then starred in Chess the Musical, which managed to finish its Australia tour without a single cancelled show.

"[We] just managed to do all the shows. But it almost looked like it would get shut down in each place. It was stressful," Natalie said.

"I feel really grateful for how it's played out for me personally," she added.

At midday, it's time for lunch. Natalie generally makes sandwiches for the family, using whatever produce is in the fridge.

"I've come on board as an ambassador for The Swag and I tried out their Swag Bag," Natalie said of the patented food storage solution that helps reduce waste by keeping fruit and veggies fresh for longer.

"It's made our produce last two, four weeks, you name it, and it's meant that with lunches, for example, instead of going, 'what are we going to have?' and then you make something crappy, we've got lettuce, tomatoes, cheese and beautiful salad sandwiches most of the time," she said.

In the afternoons, Natalie will usually make time for exercise and some singing. As for the type of exercise, it varies depending on the day.

"I've been doing two personal training sessions a week and as much Pilates as I can," she said.

"My favourite is Yin Yoga - I love it so much. It's not everyone's cup of tea but it's such a relief not just physically but mentally. I also love reformer Pilates, I've been doing it for years."

"The other thing that is really important to me is meditation," she continued. "I feel like more than ever we need positive messages in our brain so I'm feeding my brain with as much positivity as possible."

Come dinnertime, the family alternates between cooking and ordering takeaway.

"We support a lot of local businesses, [but] we cook as well. My husband tends to cook really good staples - he's kind of the roast dinner guy and I tend to experiment and jump in with a recipe of some sort," she said.

After a long day, Natalie has a few forms of self care that help her wind down.

"My wants and needs aren't the same each day but it's trying to have a minute to yourself. If that's doing mediation or going for a walk or going for a bike ride... I think that self care is important to give back to your family," she said.

"I love a good shower. I kind of mediate in the shower and take too long. I can't be a great mother if I haven't given myself love."

When Natalie and Cameron put the kids to bed, they try to practice meditation with the kids.

"My daughter's not into it as much as my son - he really finds that it helps him switch off," she said.

Once Hendrix and Harper are asleep, it's time to relax and watch some TV, before heading to bed around 10pm.

"We just finished Hacks. Oh my gosh, it's so good," she said. "And we're halfway through Mr Inbetween. It's really brilliant."