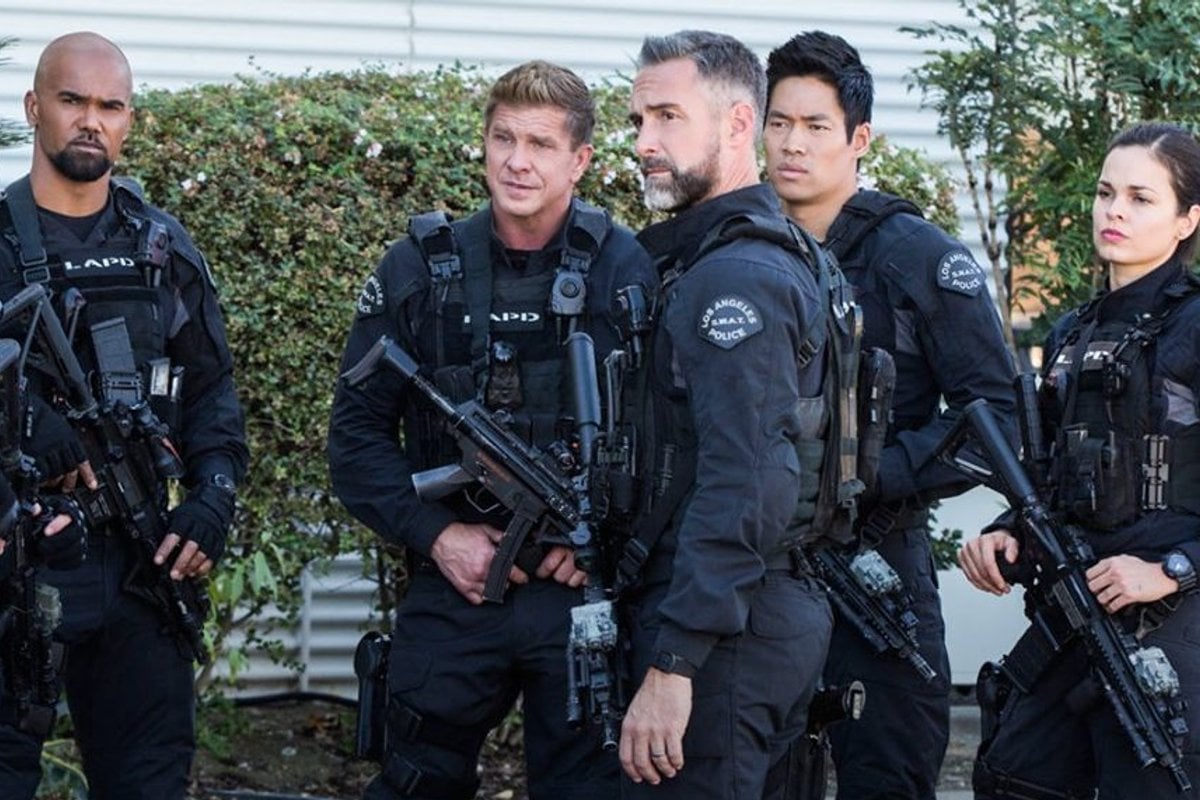 S.W.A.T is best described as a mix between Criminal Minds and Law & Order, but with less pondering of clues and more running into buildings with guns while yelling, "STAY LIQUID."

You can watch season four on Binge, and the first three on Netflix where it's currently trending fourth in Australia.

It's the kind of series that wraps up nicely every episode, and in a world where things are just... not wrapping up nicely (hello COVID, yes we're looking at you), it's the kind of closure we need in our lives.

Watch: The season one trailer for S.W.A.T. Post continues after video.

Set in Los Angeles, S.W.A.T follows the professional and personal lives of one unit attached to the city's police department.

They're the guys who are called in when things get really hairy - think hostage situations, school shootings, drug busts and armed robberies.

The team is like a big dysfunctional but incredibly loyal family, and when the shooting and saving people part of the episodes subsides (don't worry, there's lots of that), we watch the six elite officers deal with relationships, loneliness, crazy mothers and children.

Seargent Daniel 'Hondo' Harrelson Jr is the squad's leader. He grew up locally in the 'rough' neighbourhoods and was inspired to become a cop because he wanted to change the way society viewed Black Americans.

David 'Deacon' Kay is a man of faith, with a big family and a loving wife, Annie. Christina 'Chris' Alonso is the only woman on the squad, and the first woman to make it to SWAT. Jim Street is the 'rebel' of the group, whose mum is in prison for killing his violent dad. Dominique Luca is third generation SWAT and a giant teddy bear, and Victor Tan's family didn't approve of him going into policing.

Outside of the core six you've got Captain Jessica Cortez, a woman in power rising through the ranks of a male-dominated industry, tough guy LAPD Commander Robert Hicks and Jeff Mumford, who leads the other SWAT team that dip in and out of the series on occasion.

Every episode you get a new crime, and by the end of the episode said crime is usually wrapped up into a neat little bow.

There's lots of fun-to-watch car explosions, high-speed chases and tension, but it's not sit on the edge of your seat/wet your pants/want to vomit from all the gore kind of action. It also almost always ends in the squad's favour, which might sound convenient but it's weirdly kind of comforting if, like us, you want to have your cake and eat it too. Aka, watch some action but be able to sleep at night.

Chuck in some relationship drama and you've got yourself a very enjoyable combo.

You've got storylines about race, complicated families, throuples, sexism, bigotry - you name it, it's in there. But it's in there in a way that's not too obvious or overdone.

And the casting isn't tokenistic. It's an ensemble show, and all six of the main characters get equal screen time.

For example, Chris is the only woman on SWAT, but her storylines aren't about how she's 'struggling to keep up with the boys.' Her storylines venture into polyamorous relationships, and undercover work and her past as a member of the dog squad.

Each character is three dimensional and has a lot going on, and it makes for super engaging TV.

It's got that cheese factor that's evident in most American crime dramas. Think Law & Order and Criminal Minds vibes. The difference with S.W.A.T is you get to know more about their personal lives and it's a more modern and gritty take.

Each episode is around the 42 minute mark, and there are 20+ episodes per series.

So with four seasons available to binge on either Binge or Netflix, that's a deep hole of viewing to fall into.

Are there more seasons coming?

Last month we got confirmation that season five has been green-lit (yippee!), and will arrive in the US around their autumn, which is between September - December.

If you're in need of an easy, get-your-mind-off work watch, heck yes.

This show is an uncomplicated distraction that's easy to dip in and out of, and - if you're in a heterosexual relationship - male partner-approved.

When I say male partner approved, this is how it will likely play out:

Male partner after watching a few episodes: "Ergh, this is so cheesy."

For more from Should I Watch It: