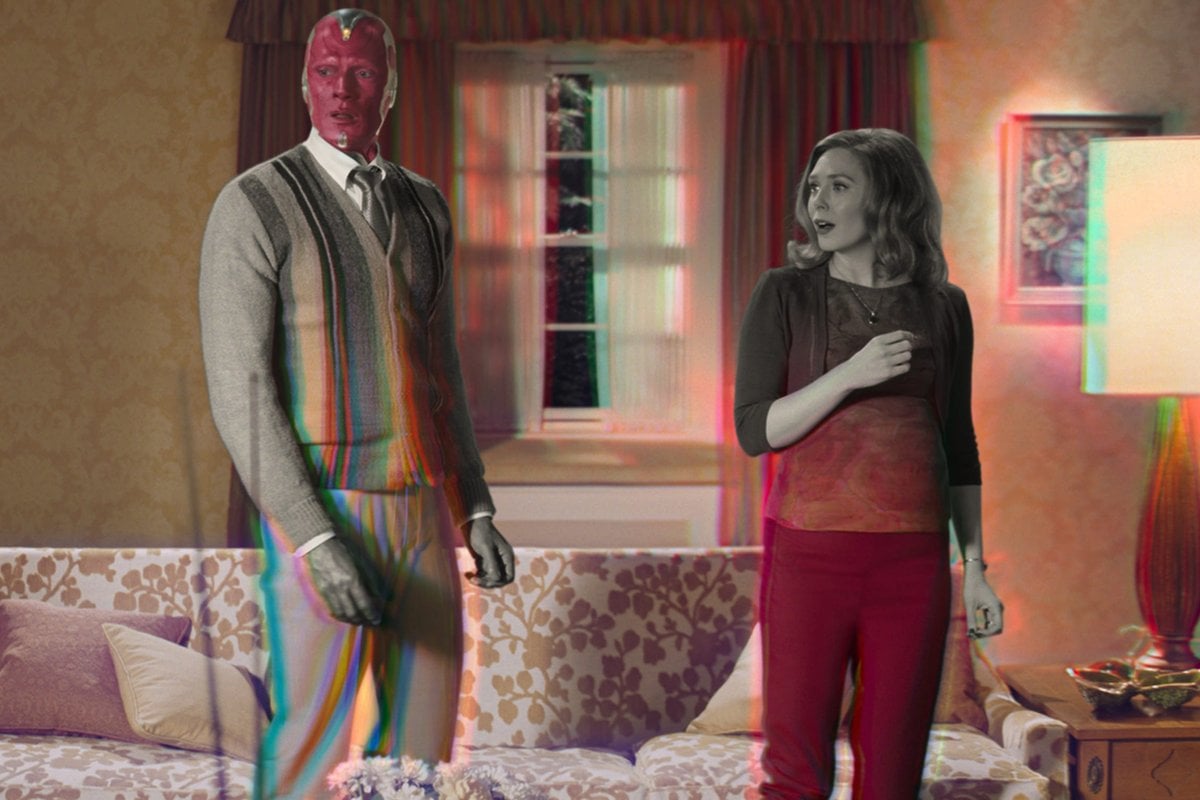 WandaVision is unlike anything else in the Marvel Cinematic Universe.

Described as part mystery, part homage to old-school sitcoms, the series follows Wanda and Vision as they attempt to navigate suburban life while battling with their fear that everything is not quite as it seems.

Watch the trailer for WandaVision below. Post continues after video.

Created by Jac Schaeffer, the nine-episode series is a bold and, well, slightly weird step into the small screen for Marvel.

Following on from the events of Marvel's 2019 film, Avengers: Endgame, WandaVision follows Wanda and Vision, who are living idyllic suburban lives in the white-picket-fenced small town of Westview.

Prior to WandaVision, Vision, an android created using artificial intelligence, was killed by supervillain Thanos during the events of Marvel's 2018 film, Avengers: Infinity War.

Despite Vision's apparent death, the series kicks off in the style of a 1950s black and white family sitcom as the couple start their lives together as newlyweds.

Complete with a studio audience, the first episode of the series channels the likes of I Love Lucy and The Dick Van Dyke Show.

In each episode, the cast are dropped into a completely new decade, with the second episode reminiscent of Bewitched and I Dream of Jeannie, while the third episode is reminiscent of The Brady Bunch. 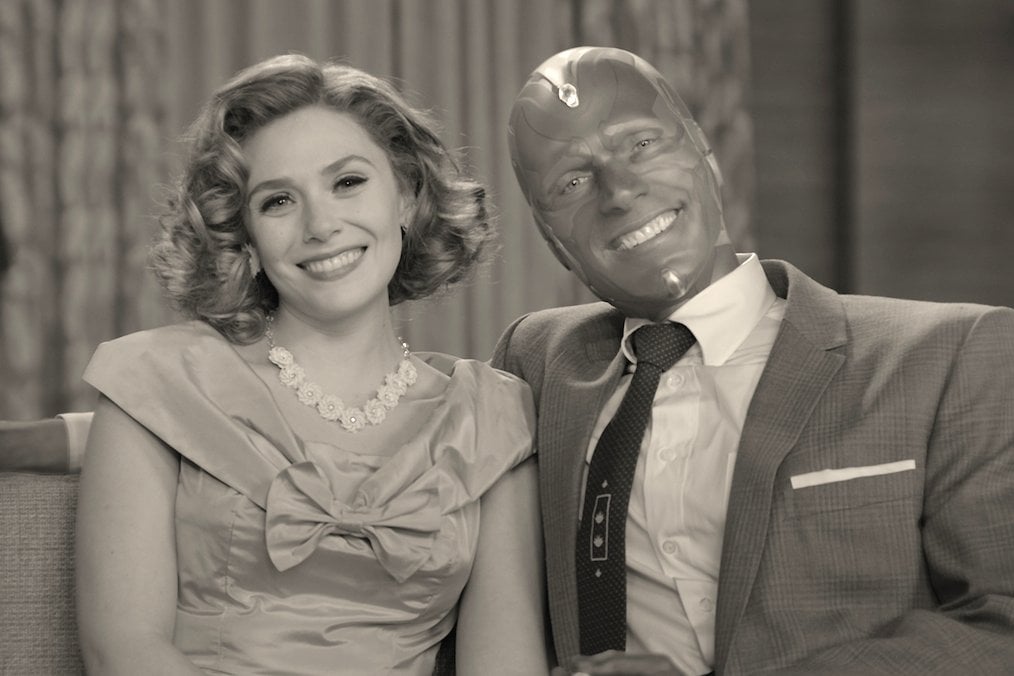 As the series progresses through the decades, Wanda and Vision take part in hilarious talent shows and awkward dinner parties as they attempt to keep their superpowers hidden from their nosy neighbours, including Agnes (Katherine Hahn) and Dottie (Emma Caulfield Ford). (For those who aren't big Marvel fans, Wanda can manipulate time and move things with a wave of her hand, while Vision has super strength, superhuman senses, and the ability to move through walls).

It soon becomes clear, however, that there's a shroud of mystery hanging over Westview.

From the sound of a man's voice calling out to Wanda on an old radio to the bizarre commercials for toasters by Stark Industries, the series is jam-packed full of mysterious clues that Wanda and Vision's reality isn't quite as it seems.

The nostalgic sitcom references, and the incredible chemistry between Elizabeth Olsen and Paul Bettany. 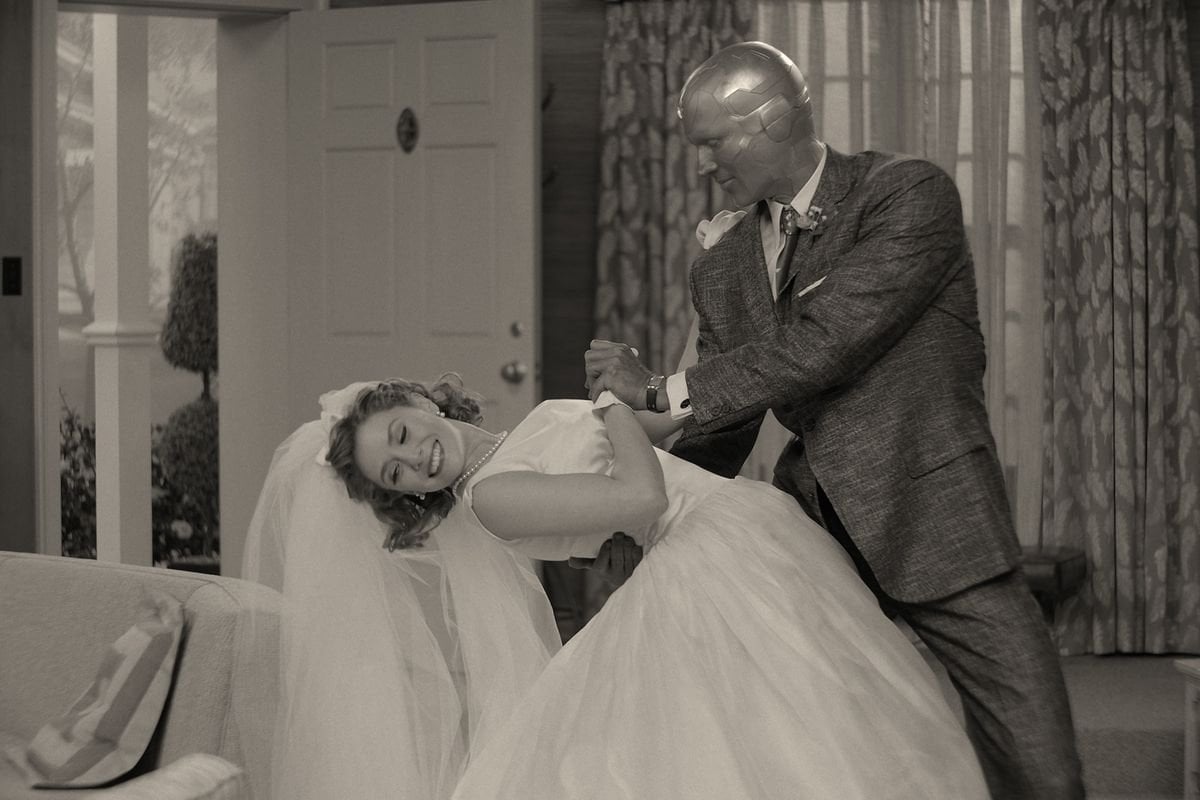 Bewitched and I Love Lucy for the nostalgia, The Truman Show for the parallel universe vibes, and Black Mirror for the dark mystery.

There are nine episodes, ranging from 30 to 40 minutes long. New episodes arrive each Friday on Disney Plus from 7pm (AEDT).

Creator Jac Schaeffer has shared that she is unable to talk about any plans for a second season.

However, Schaeffer believes that season one feels like a complete story.

"It was always the design with these shows that they feel like a run of a comic," she told The Hollywood Reporter.

"In that way, it feels very complete. It's an emotional completion I stand by and feel great about and always was very much baked in."

Listen to Mamamia's daily entertainment podcast, The Spill, below. Post continues after podcast.'

As the first television offering for the Marvel Cinematic Universe, WandaVision is the type of series that Marvel fanatics will be thinking about for days afterwards. (Seriously, the little tidbits of mystery and hidden Marvel references will have you dying for the next episode).

But for those that aren't as hooked on Marvel, there's still a lot to love.

From the set design to the wardrobe to the soundtrack, the series is incredibly nostalgic, transporting viewers to each decade (and sitcom style) with ease.

And despite the unwavering sense of mystery hovering in the background, the series is full of countless comedic moments that will remind you of sitcoms like I Love Lucy and Bewitched.

You can watch WandaVision on Disney Plus now.