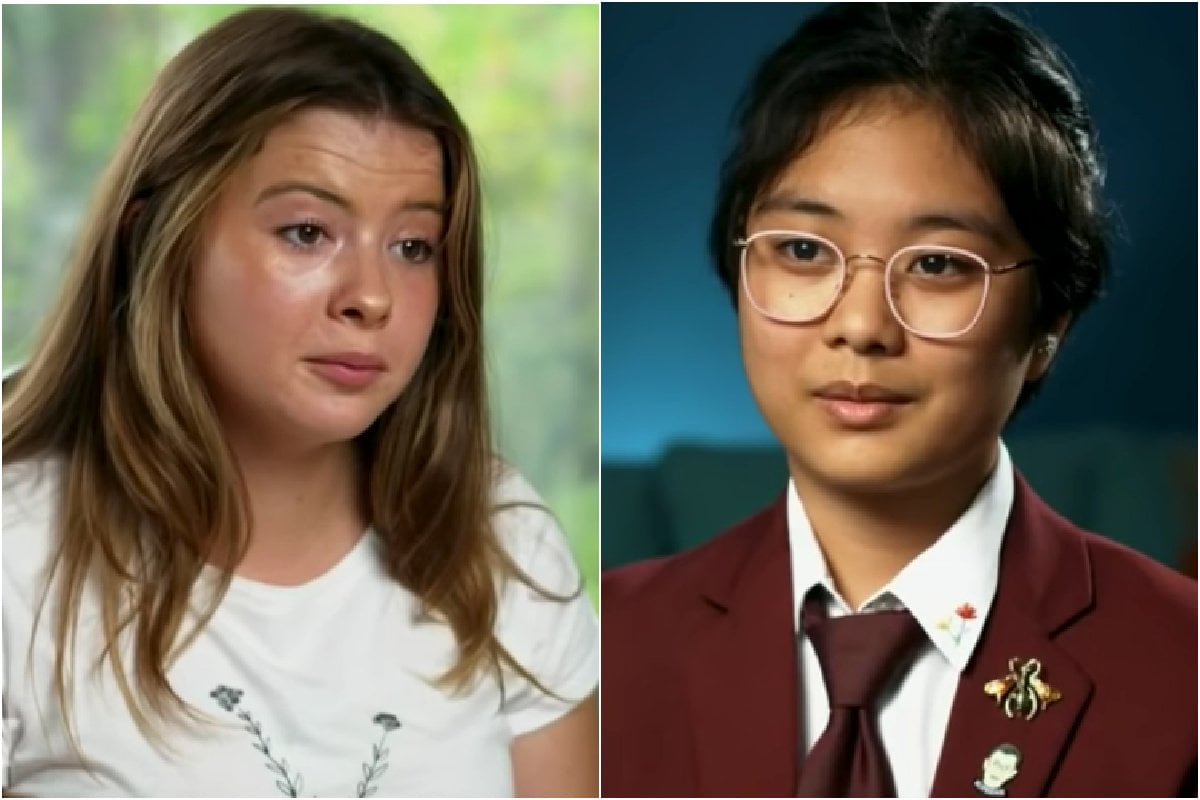 Two school students have shared their experiences of being sexually assaulted at the age of 14, adding their voices to the conversation Australia is having right now about rape culture and consent.

Danielle Villafana, now 17, was on a public train when she was assaulted.

"I was so so scared, I didn’t think there was anything else I could do but freeze and wait it out," she told The Project on Monday night.

Watch: Both girls were 14 when they were sexually assaulted. Post continues after video.

There were others on the train at the time, but no one did or said anything. Dani says her attacker was someone she'd previously trusted.

A few weeks after the attack, Dani broke down at school and told a teacher who called the police. 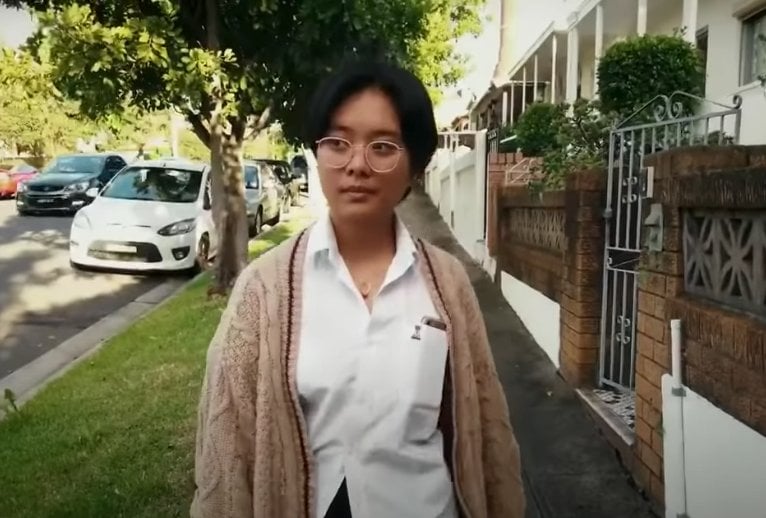 Danielle (Dani) was sexually assaulted on a train. There were others in the carriage, but no one did anything. Image: Ten.

"They interrogated me on what exactly had happened to me and what I went through and what I said and what I did, and they asked me what I was wearing," she told The Project host Lisa Wilkinson.

"It was terrifying to me that the very people who exist and are paid to protect you could ask you something like that and challenge the most traumatising thing that has ever happened to you and suggest that, as a kid, it’s your fault that this happened to you."

Police decided not to press charges, and Dani struggles to separate what's more traumatic: the event itself, or how badly the system failed her.

Tonight on @theprojecttv two of the most courageous young women I’ve ever met.

Their wisdom and ideas for a way forward on the shocking rape culture surrounding teenage girls - of which they are both survivors - will blow you away.#TheProjectTV #EnoughIsEnough #March4Justice https://t.co/bkAif6yP9z

"What we see in Australia is that rape culture is so intrinsic to our understanding of power we accept it as normal. So what we see is from a young age boys aren't taught that they shouldn't keep hitting on that girl. They're never taught about what consent looks like and these conversations just aren't happening because often when girls do speak out they're slut-shamed," she told Ten.

"It's so terrifying to think that just like you, other girls my age have been raped and assaulted and just like you, the people meant to protect us, failed us. And it just keeps happening," she added.

Lily Maud Horton was let down by the same system when she was 14 too.

The now 17-year-old was at a party with friends when a man, in his 20s, walked in and told her, "Wow. You are gorgeous."

"And I was flattered. You know, I’m a young teenager. I’m insecure. And I didn’t realise that a monster could look so kind," she told The Project, telling Wilkinson she was "drugged up. Completely immobilised. And raped." 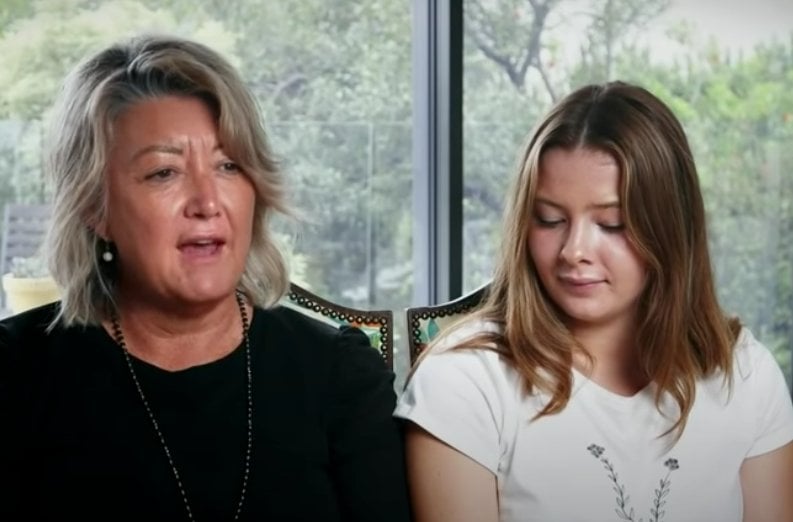 Lily with her mother on The Project. Image: Ten.

"It was frightening to not have control of your own body, to have someone on top of you with the most intense eyes you’ve ever seen and such power, being paralysed in that way is something I wouldn’t wish on anyone.

"We're taught there's fight or flight but for the most part our body lets us know that if we move we could be hurt further, and it makes that choice that to freeze and to mentally leave and wait until it's over, is the safest option."

Lily went to the police a few days later. She feels 'lucky' that the police officer she ended up with was empathetic and female because "the rest was awful."

So awful that that very same police officer quit the force after her case because "she could not handle having this job anymore. Because so many victims go through the court system, and so evidently are victims, and then they just brush them off and say not guilty."

It was the Prime Minister's comment about being able to protest freely that hurt Lily the most in recent weeks, as conversations about rape and sexual assault cloud our country's Parliament House.

"This is a vibrant liberal democracy, Mr Speaker. Not far from here, such marches, even now, are being met with bullets, but not here in this country, Mr Speaker," Scott Morrison told parliament as the 'March 4 Justice' gathered outside.

Lily said of that moment: "ScoMo's comment about being able to protest, safely, that's not an expression of opinion. That is pleading for the basic human right... and for him to say, 'at least you weren't getting shot at'. I don't get it. Because so many women are murdered as a result of this. And in a way I was. I am still living, but I am not the same girl I was. Part of me did die inside. And I am never going to be the same."

Lily considers herself broken, terrified of men and unstable. She is so affected by what happened to her that she has decided that she doesn't ever want to be in a relationship.

"I want to give kids that need it a home, and be a mother, because I have that natural instinct. But I am too terrified to ever have a relationship with anyone," she said.

Lily, Dani, and 40,000 others have signed Chanel Contos' petition calling for sexual consent to be at the forefront of educational issues in every Australian school, from a young age.

"What needs to happen is consent is taught far earlier, and actually taught. Not just contraception... I understand that's important. But what's far more important is that people don't have these experiences, because the amount of boys that probably have assaulted someone and don't realise that what they've done is assault is the largest part of the issue," Lily said.

As Lily's mother Kelly told The Project, "I just don't think our government understands that we will never forget their response to this."

These schoolgirls and their families are sick of staying silent. They're sick of inaction. And they're joining the growing chorus of Australians demanding change.