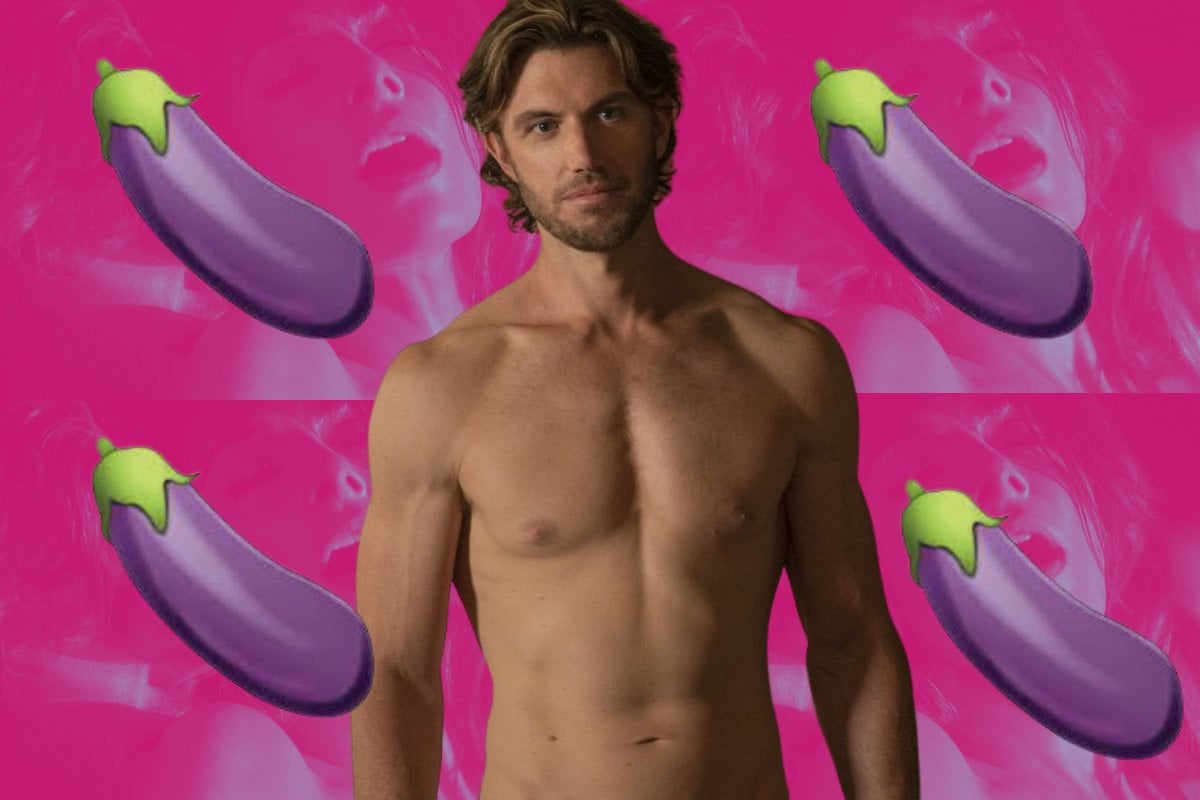 At the time of publication, the terms 'Adam Demos d*ck' and 'Adam Demos penis' are trending on Google Trends.

It seems thousands of women across Australia, and around the world, have questions about the Australian actor's... dare I say it... massive throbbing member.

They want to know whether it's really... that big, and also if there are... photos of it.

This is because the rather tall Aussie is starring in the new Netflix series Sex/Life, which is currently the number two show on the streaming platform.

Watch the trailer for Netflix's Sex/Life. Post continues below.

The show does exactly what it says on the tin. It follows mum-of-two Billie Connelly's (Sarah Shahi) sex and also her life and also her sex life.

Billie is breastfeeding her newborn daughter, looking after her toddler son, having vanilla sex with her 'perfect husband' whose name is - get this - Cooper, all the while fantasising about her ex-boyfriend Brad who is played by Demos aka he of the much googled d*ck.

Without giving too much away, there's a scene in episode three (around the 20 minute mark) where Cooper follows Brad into the showers at his exclusive gym. Brad is showering with his back to the camera and then he turns around and HOO BOY, IT'S A MONSTER.

It's just such an unexpected moment, and it's just so much bigger than anyone could have imagined.

It's like, well, Jaws coming out of the water.

God, the people at Netflix are very good at what they do.

Anyway, below I unpack what Sex/Life is about and whether you should watch it:

What is Sex/Life about?

In a nutshell, Sex/Life is about a tired stay-at-home mum who is bored with her 'perfect husband' Cooper and who wants to revisit the best sex of her goddamn life.

Things start to get complicated after Billie writes about the aforementioned d*ck and the good times they had together in her journal and Cooper of The Vanilla Sex reads it.

Things get even more complicated when Billie discovers her best friend Sasha Snow (yep, that's her name) is having casual sex with the tall fella with the big penis.

Did I mention she narrates the whole thing in what can only be described as the breathless inner monologue of a Mills and Boon protagonist?

And the lighting? It's always purple when she's remembering the good sex. No idea why.

The shower scene. I mean it, everyone will remember where they were the first time they saw that massive schlong. It's equal parts traumatising and fascinating.

The dialogue. Dear God, the dialogue. At one stage Sasha Snow says "last night you said he was licking it like a lollipop" and I just know no actual woman hasn't ever uttered such a terrifying phrase.

What movies/TV shows/books will it remind you of?

50 Shades of Grey for the non-stop sex scenes.

Mills and Boon's complete back catalogue for the terribly storyline and cheesy dialogue.

The cucumber growing competition at your local country show.

I meant the show not the penis, you dirty, dirty gals.

There are eight episodes around 45 minutes each.

So a whole day binge or a few nights during the week, whatever... tickles your fancy.

Yes, you should watch it. For the shower scene alone.

You should watch it so you can join the thousands of women who googled 'Adam Demos d*ck' and discovered that no, there isn't a catalogue of photos available online.

And you should watch it because you're probably in lockdown or living with restrictions, and it's winter, and what a way to fill in eight hours.