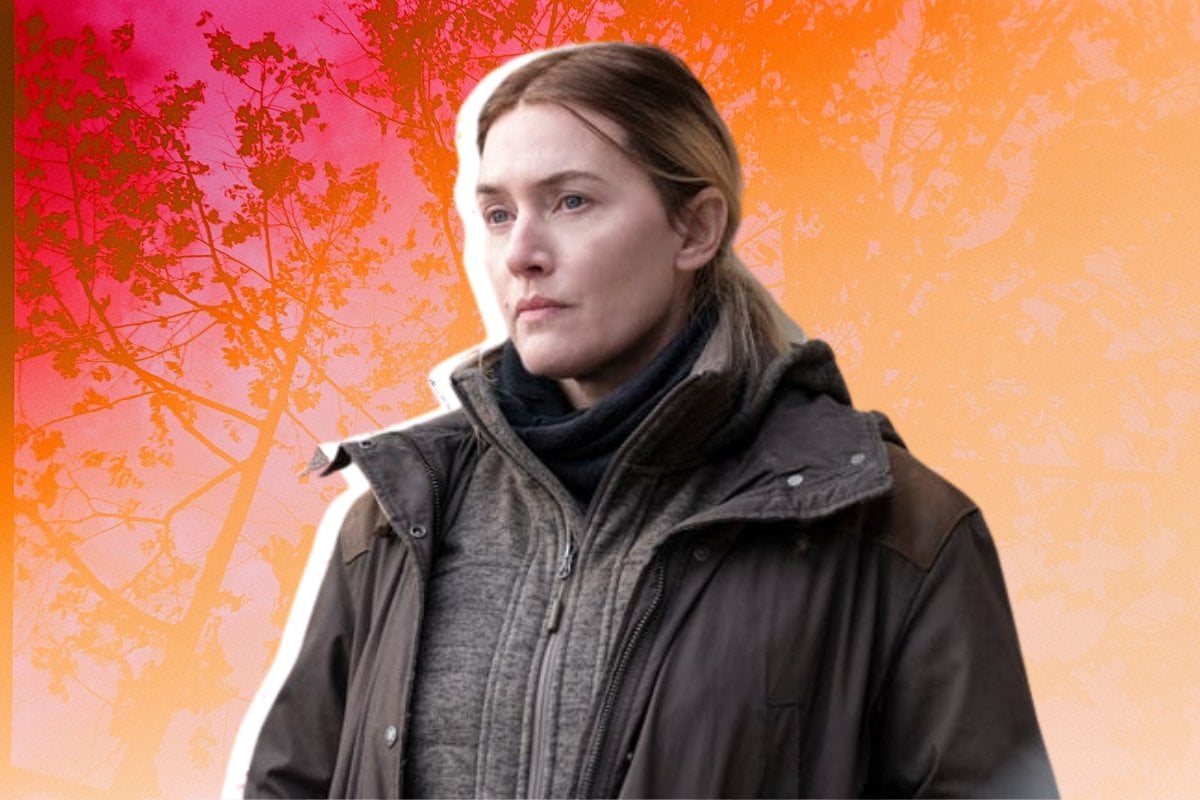 There's a scene in the first episode of Mare of Easttown, where Kate Winslet's character jumps over a fence in the pursuit of a suspect.

She twists her ankle, yells out 'f*ck' or something similar, and then continues to slowly limp after the suspect.

It is both one of the most realistic and subtly funny scenes ever included in a crime drama. And it perfectly sums up the vibe of Mare of Easttown. It's a darkly subdued crime thriller, with surprisingly funny dialogue, which will make you fall in love with the characters before it brutally kills one off.

It's like if Fargo met Sharp Objects and then they shared a beer with the cast of Shameless at the local dive bar.

What is Mare of Easttown about?

The series is set in the 'down on their luck' hamlet of Easttown, Pennsylvania, where local detective Mare (Winslet) is investigating the murder of teen mum Erin McMenamin (Cailee Spaeny), which may be connected to the unsolved disappearances of two other local women.

Soft-spoken county detective Colin Zabel (Evan Peters) is called in to help with the case, and while the two initially clash, Mare eventually warms to him.

While Mare is investigating the murder, her own life is falling apart around her. Her ex has bought the house behind hers and is engaged to his new girlfriend. And while her parents, her friends, and their daughter head to his house to celebrate, she heads to the local bar to hook up with the dishevelled 'once wrote a bestseller' newcomer in town, Richard Ryan (Guy Pearce).

Fargo for the accents, Sharp Objects for the slow-burning murder mystery, and Shameless for the loveable, scrappy, dysfunctional local community.

There are seven episodes of Mare of Easttown and they're around 50 minutes each. The first episode is streaming on Binge now and new episodes will drop each Monday.

Will there be a second season of Mare of Easttown?

Mare of Easttown has been billed as a miniseries and there's no word whether there will be a second season yet, but fingers crossed.

LISTEN: The final season of Younger will answer your biggest questions. Post continues below.

Mare of Easttown is a slow burner, the murder doesn't even happen until the end of the first episode, but the story is so brilliantly told and the characters are so intriguing with their accents and their intertwined backstories, that'll hook you in from the opening scene.

It's the perfect show for fans of crime dramas like Fargo, Sharp Objects and The Sinner, and fans of gritty comedy dramas like Shameless.

The first episode of Mare of Easttown is streaming on Binge from Monday, April 19, with new episodes dropping weekly.