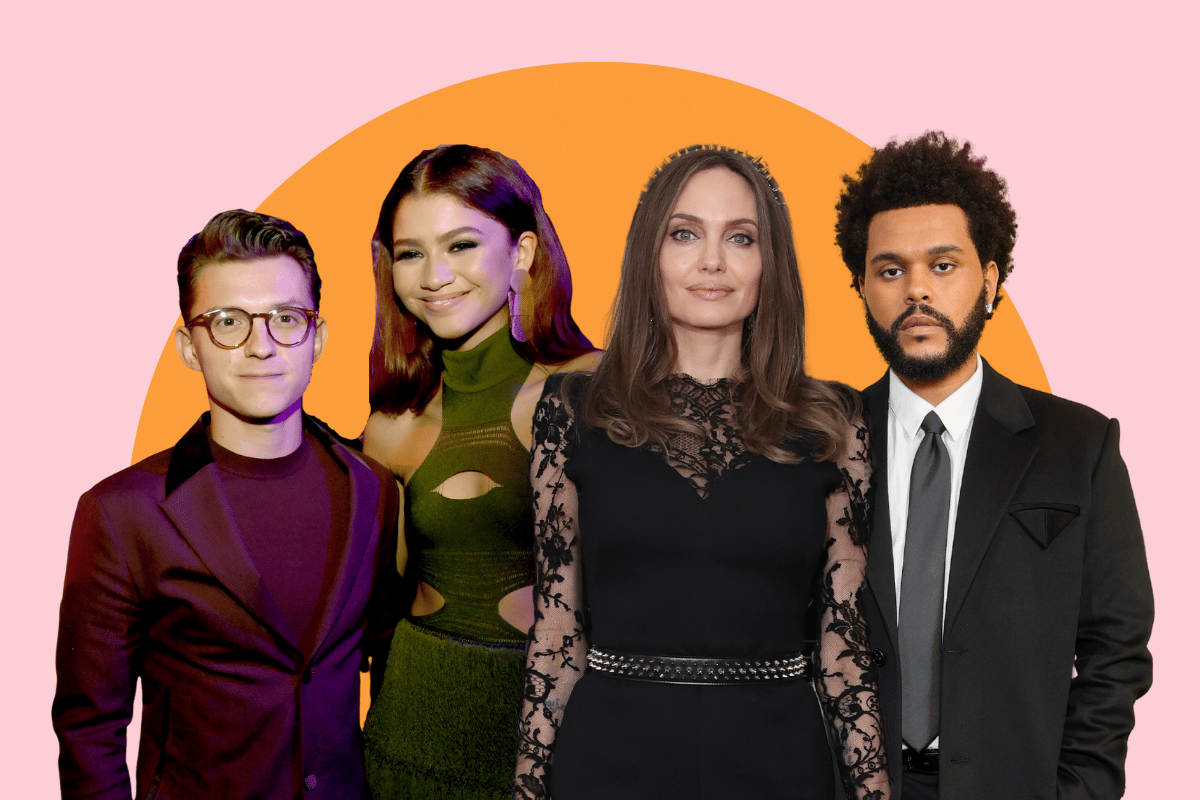 2020 was undoubtedly the year of the celebrity break-up.

Amid the COVID-19 pandemic and a spate of worldwide lockdowns, we read countless divorce announcements and carefully crafted joint statements from celebrity couples including Jason Sudeikis and Olivia Wilde, Megan Fox and Brian Austin Green, Mary-Kate Olsen and Olivier Sarkozy, and Ashley Benson and Cara Delevingne.

Speaking of celebrity couples, Megan Mullally and Nick Offerman are the definition of #couplegoals. Post continues below.

But in 2021, it seems there's a new trend in celebrity relationships.

As The Cut pointed out in May, 2021 is shaping up to be the year of the unexpected celebrity couple.

From the rumoured relationship between Kanye West and Irina Shayk to Megan Fox's PDA-filled relationship with Machine Gun Kelly, the list just keeps on growing.

So, here are 10 of the most unexpected celebrity couples of 2021 so far.

After years of denying romance rumours, Spiderman stars Zendaya and Tom Holland have been photographed kissing in Los Angeles. And you best believe, the "Tomdaya" shippers are excited about it.

The publication also reported that Holland, 25, was seen hanging out with Zendaya, 24, and her mother in the Silver Lake neighbourhood in Los Angeles on the same day.

Dating rumours between the pair have been floating around for years, ever since they starred in the 2017 film Spider-Man: Homecoming.

"They started seeing each other while they were filming Spider-Man," an unnamed source supposedly told People in 2017.

"They've been super careful to keep it private and out of the public eye but they've gone on vacations with each other and try to spend as much time as possible with one another."

However, both Holland and Zendaya denied anything romantic at the time of publication.

Angelina Jolie and The Weeknd.

According to Page Six, the pair were photographed getting dinner together in an Italian restaurant in Los Angeles.

Jolie, who is going through a custody battle with her ex-husband Brad Pitt, and The Weeknd reportedly spent hours in the restaurant before leaving separately. 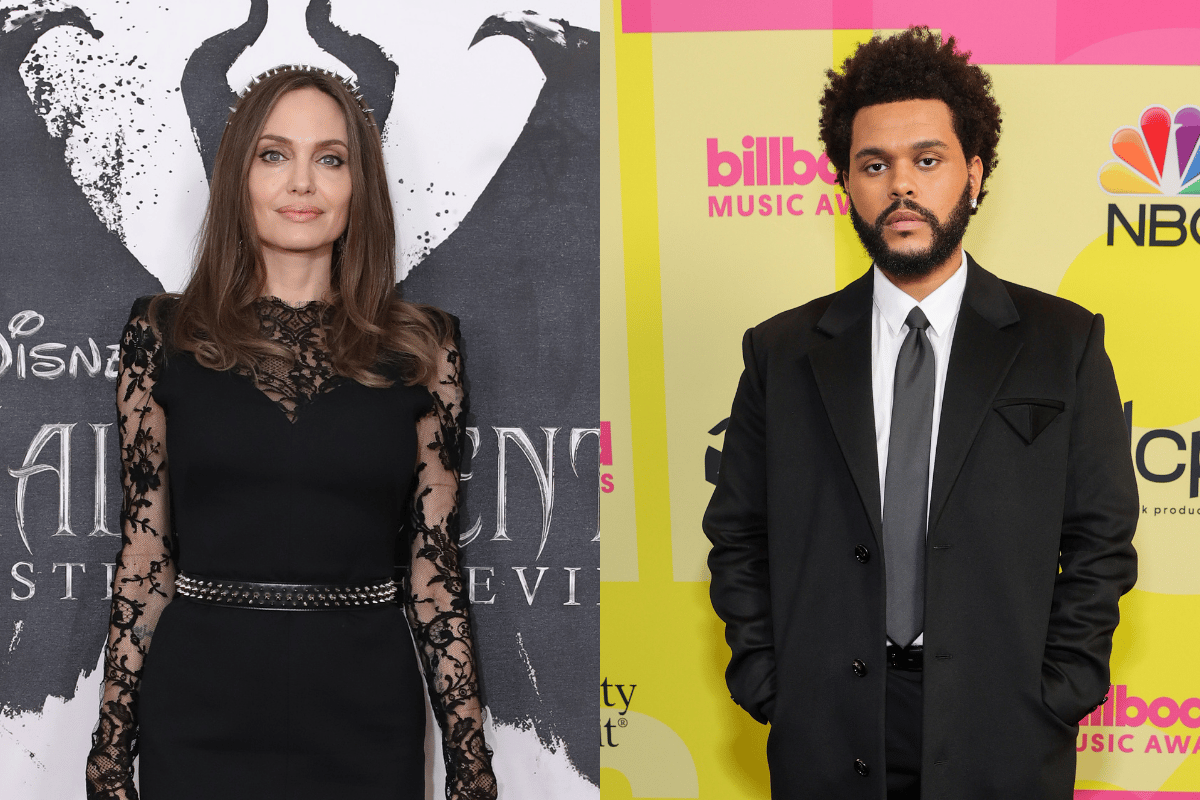 While nothing has been officially confirmed, an unnamed source told the publication the pair were "clearly not trying to hide [the dinner date]".

Earlier this year, it was officially confirmed that Kim Kardashian and Kanye West are getting a divorce.

And now, it seems West has officially moved on.

According to E! News, Kanye West and model Irina Shayk have been casually seeing each other for several weeks.

The pair, who have known each other for years, were photographed in Provence, France during West's 44th birthday.

"Kanye has been flying in and out of New York to be with her," a source told the E! News.

"Kanye and Irina have known each other for years through the fashion industry. They were connected through their mutual friend group and Riccardo Tisci," the source continued.

"Kanye and Irina connected recently when they were both in New York City. They met up one night and had chemistry and hit it off."

Back in 2010, Shayk also appeared in West's music video for his song 'Power'. The actress has also modelled for West's brand, Yeezy.

As for how Kim Kardashian feels about the whole situation, sources told The Sun that she doesn't believe the relationship rumours.

"To her, it's some attention seeking no one who tried to piggy back some clout off their wedding anniversary," the source claimed.

"She's not bothered at all about it, no one in her circle appears to care or believe it. Even if it is true, I doubt she'll even be upset at this point."

From 2015 to 2019, Shayk was dating actor Bradley Cooper. The couple shared a daughter together, Lea De Seine, who is four years old.

Just days after John Mulaney confirmed his divorce from his wife of nearly seven years, Annamarie Tendler, the comedian was linked to actress Olivia Munn. 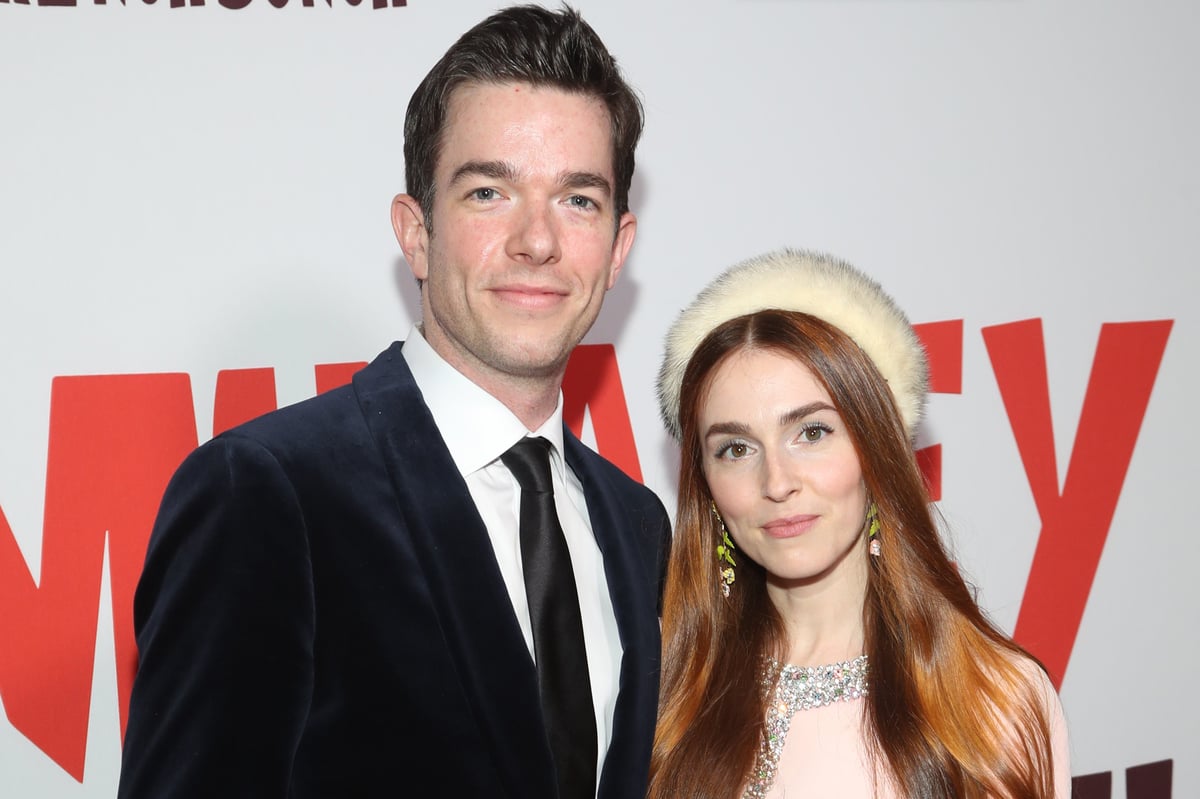 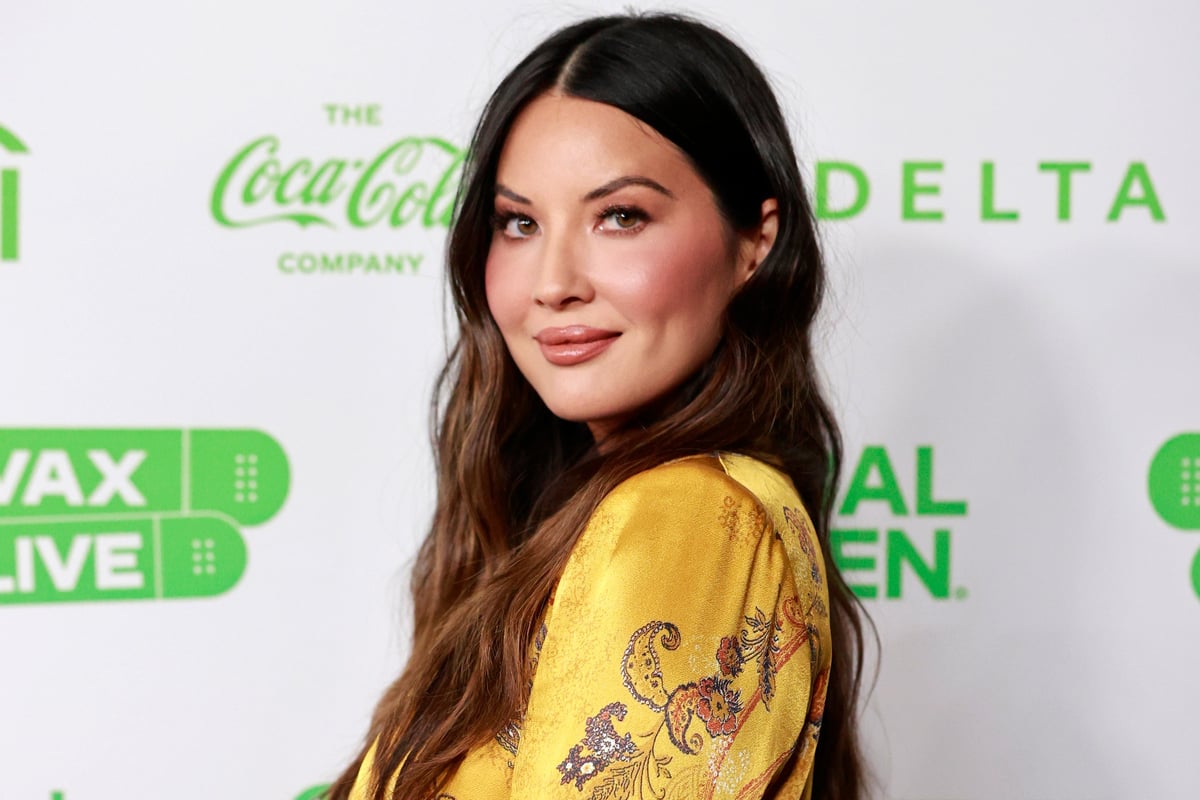 "This is very new, they're taking it slowly," a source 'close to Mulaney' told People in May. "They met at church in Los Angeles."

At the time, an interview resurfaced where Munn recalled "fangirling" over Mulaney when she met him and Tendler at a wedding.

"I was like 'Oh my gosh, do you and your fiancé want to go have dinner or something and go hang out?'" she told HuffPost Live in 2015.

"At first it was cool, and then I kept going up to him at the wedding like, 'So you having fun?' I was just so obsessed with hanging out with and talking with him."

When news broke that Mulaney and Tendler were ending their marriage, Tendler hinted Mulaney was the one behind their split.

"I am heartbroken that John has decided to end our marriage," Tendler said in a statement to People. "I wish him support and success as he continues his recovery."

If you haven't already noticed, Sydney has virtually become the new Hollywood.

While Thor: Love and Thunder has been filming in Sydney, the city has been home to actors including Chris Hemsworth, Natalie Portman, Matt Damon, Jeff Goldblum, Melissa McCarthy and Christian Bale.

Amid filming on the upcoming Marvel movie, New Zealand director, Taika Waititi, has been linked to Rita Ora, who is also working in Sydney as a judge on The Voice.

In April, the British singer shared a carousel of photos to Instagram, including a photo of herself cuddling the Thor director.

2021 is going in an interesting direction pic.twitter.com/mompb3pFhm

Sources have since claimed the pair have been seeing each other for quite some time, and the rumoured couple have been photographed together on numerous occasions around Australia.

"They've been a couple since early March but kept things low key. However, all their friends know about the relationship. They're really into each other," a source told The Sun.

Waititi and Winstanley, who have two young daughters, reportedly "secretly separated" in 2018.

After famously being engaged to Ariana Grande for five months, the comedian has been linked to Kate Beckinsale, Margaret Qualley, and Kaia Gerber

Now, Davidson is rumoured to be dating Phoebe Dynevor aka Daphne Bridgerton.

The couple have been photographed together in Manchester, and they've also been seen wearing "identical" necklaces bearing their initials during recent interviews.

The pair also just made their first public appearance together at the Wimbledon Championship in London, over the weekend.

After meeting on the set of upcoming film Midnight In The Switchgrass, Fox felt an ~astrological connection~ between them.

"I knew right away that he was what I call a twin flame," she recalled.

"Instead of a soul mate, a twin flame is actually where a soul has ascended into a high enough level that it can be split into two different bodies at the same time. So we're actually two halves of the same soul, I think. And I said that to him almost immediately, because I felt it right away."

Since then, the couple have shared countless photos from their PDA-filled new relationship on social media.

In recent months, Megan Fox and Machine Gun Kelly have been seen hanging out with another unexpected celebrity couple: Kourtney Kardashian and Travis Barker.

The couple, who made their relationship Instagram official on Valentine's Day, have had a long history as friends. In fact, the Blink 182 drummer has even appeared on Keeping Up With The Kardashians in the past.

Since going public with their relationship, the unexpected couple haven't been shy when it comes to PDA.

And what does Scott Disick think of all this?

"Scott has really distanced himself from Kourtney recently," a source told E! News.

"He is glad she is happy, but it's definitely been hard on him. He doesn't like to bring it up, and it's a weird convo for him. At one point, the family was really encouraging Scott and Kourtney to try the relationship again and it's a bit of an eye-opener for him, that it's truly never going to happen."

Remember how Dancing with the Stars pro Sharna Burgess was meant to appear on The Bachelorette?

Well, it seems that won't be happening anytime soon.

Since January, the 35-year-old has been dating Megan Fox's ex-husband, Brian Austin Green.

"It was nothing that I was completely open to, I didn't think at the time, but it's working out pretty well so far."

At the start of the year, Olivia Wilde was photographed holding hands with Harry Styles at a wedding for Styles' manager in California.

"They were affectionate around their friends, held hands and looked very happy. They have dated for a few weeks," a source told People.

The rumours surrounding Wilde and Styles surfaced just months after news broke about Wilde's split from actor Jason Sudeikis, who she was engaged to for seven years.

Styles and Wilde after the singer was cast alongside Chris Pine and Florence Pugh in Wilde's upcoming movie, Don't Worry, Darling.

Like a $50 gift voucher for your thoughts? For your chance, take our 8-min survey  .

Reply
Upvote
6 upvotes
"Instead of a soul mate, a twin flame is actually where a soul has ascended into a high enough level that it can be split into two different bodies at the same time. So we're actually two halves of the same soul, I think. And I said that to him almost immediately, because I felt it right away."
OK, so kinda kamikaze Friday:
W*nker on two levels.

Reply
Upvote
3 upvotes
@gu3st any time someone starts talking like that, you can just about see the countdown to their expiration date.
M
mamamia-user-482898552 a year ago