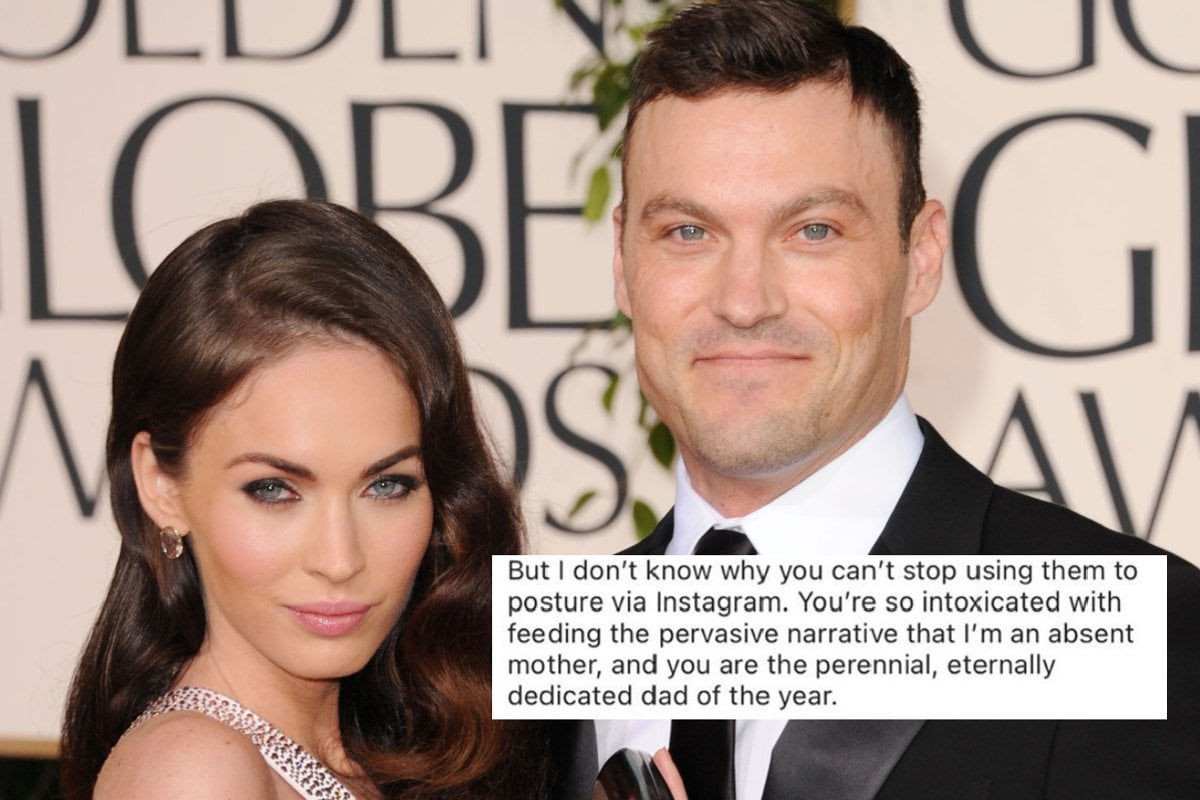 Megan Fox and her ex-husband Brian Austin Green have had a public disagreement over an Instagram post involving their four-year-old son.

On Halloween, Brian posted a photo to his Instagram with the couple's youngest son, Journey.

The former actress commented on her estranged husband's post, saying: "Why does Journey have to be in this picture? It's not hard to crop them out. Or choose photos they aren't in. I had a great Halloween with them yesterday, and yet notice how absent they are from my social media. I know you love your kids."

Fox continued: "But I don't know why you can't stop using them to posture via Instagram. You're so intoxicated with feeding the pervasive narrative that I'm an absent mother, and you are the perennial, eternally dedicated dad of the year.

"You have them half of the time. Congratulations you truly are a remarkable human! Why do you need the internet to echo back to you what should be inexhaustibly evident in the way your children love you?"

Brian Austin Green then deleted the photo, and re-uploaded it with his son cropped out.

"Hope you all had a happy Halloween!!!" he captioned the post.

Hope you all had a happy Halloween!!!

Fox and Green announced they had separated this year after 10 years of marriage. The couple began dating in 2004, and have been in an on-again-off-again relationship since.

They were engaged, then split, then engaged again, then married, then separated, then reconciled, and then now separated again, and somewhere in between, they had three children.

The Transformers actress keeps her personal life close to her chest, but her marriage to the 90210 alum has been at the centre of media attention for years due to their multiple splits and three kids. Now, Megan Fox is dating American rapper Machine Gun Kelly.

Watch: Celebrities are getting creative in isolation. Post continues below video.

Here’s everything we know about Fox and Green's former relationship.

The pair met on the set of sitcom Hope and Faith, when Fox was just 18 years old. The then 30-year-old Green was a father to a two-year-old son, with his former 90210 castmate, Vanessa Marcil.

Speaking to ELLE in 2009, Fox recounted her initial attraction to Green, saying, “I was like, ‘Oh my God, I have to be with you. You’re not a threat, you’re not some d-bag that’s going to cause a lot of problems.'”

“I had to convince him that I was slightly more responsible and well-spoken and had other things to bring to the table besides being 18,” she remembers.

In 2012, speaking with Cosmpolitan, the actress shared further details of their first meeting, reflecting: "The first time I saw him, I got butterflies. And the first time he casually touched me? There was so much electricity. I don't want to sound corny or cliché, but I do believe we are destined to live this part of our lives together."

The couple indeed formed a relationship and in 2007, after a three year relationship, Green proposed to Fox.

The couple called off their engagement in February 2009, before rekindling just a few months later. In June 2010, they married in Hawaii.

"We have been very lucky to have had a peaceful few weeks at home, but I would like to release this myself before others do," Fox announced at the time.

"I gave birth to our son Noah Shannon Green on September 27th. He is healthy, happy, and perfect."

Then, a year and a half later, in February 2014, more happy news came. The couple had welcomed their second son, Bodhi Ransom.

"They had several conflicts that led to the divorce," a source told People at the time.

"Megan worked a lot last year, and she continues to work a lot. When she is away, Brian stays with the kids. Before they filed for divorce, they had disagreements about this situation."

According to TMZ, Brian Austin Green requested spousal support from Fox due to a 2014 car accident, which triggered vertigo and made it difficult for him to work.

In April 2016, Fox then surprised the world with the announcement that she was pregnant with her third baby. She later confirmed that she had called off her divorce from Green in July 2016, as the two prepared for the arrival of their third child.

"During their separation, Brian always hoped Megan would change her mind about the divorce and he is very happy that she did," a source told People. "They both worked hard to figure out their marriage and things seem great."

In August 2016, they welcomed their third child, naming him Journey River.

Whilst Fox rarely speaks about her private matters, her then-husband was more open about their struggles and relationship.

In 2017, on his podcast '…With Brian Austin Green' the actor admitted, "Marriage is hard".

"It’s work, I think, for anyone. I think when you get to the point like we have, where you have kids and you’ve been married for a while and we’ve been together for a long time, it’s… you just take it day by day."

In May, Brian Austin Green confirmed he and Fox had split after weeks of rumours.

During an episode on his podcast, the actor said the pair split late last year after a heartfelt conversation about the state of their marriage, after she had returned from filming upcoming crime thriller Midnight In The Switchgrass, alongside her now-boyfriend, Machine Gun Kelly.

Achingly Beautiful Boy... My heart is yours 🔪♥️🔪

"She said, 'I realised when I was out of the country working alone that I feel more like myself and I liked myself better during that experience and I think that might be something worth trying for me,'" he recalled Fox telling him at the time.

"I was shocked and I was upset about it but I can’t be upset at her because she didn’t ask to feel that way. It wasn’t a choice she made, that’s the way she honestly felt. We talked about it a little more and said let’s separate for a bit… and so we did."

A source recently told People magazine, however, that the pair are struggling to get along while co-parenting.

"It's a tough situation. As a dad, Brian is great. He is wonderful with the boys," the source told People.

"The issue is that he is bitter that Megan moved on so quickly with Machine Gun Kelly. It's been very hard for him. His behaviour can be pretty immature when it comes to Megan though. He knows how to get Megan upset. In the past, he was advised to chill out and just focus on doing the right thing for the boys."

This story was originally published in May 2020 and has been updated on November 3, 2020.

Reply
Upvote
4 upvotes
Meh, I'm not sure what would be more upsetting to their kids, their images appearing on instagram, or Mum moving on so rapidly and publicly.
C
cat 2 years ago

Reply
Upvote
@gu3st eh, we don't know how 'rapidly' it is, though, do we. It's possible the parents relationship had broken down long before it was made public. In fact, I'm pretty sure they almost split before they had the third kid. Plus, we don't know what the kids are seeing, it's perfectly possible that she only sees the new guy when the kids are with their dad. We don't have anything close to the full story, let's not judge.
G
gu3st a year ago

Reply
Upvote
3 upvotes
@cat You've viewed that comment through a lens of your own making. Kids of that age aren't thinking or judging sexually at all, all they care is that their family is no more.
Mum posting in the mirror with their Dad's replacement...too soon.
I stand by it.
C
cat a year ago

Reply
Upvote
@gu3st you have no idea what the kids think and it’s disingenuous to try to shame their mother in their name. They might be delighted that their parents have stopped fighting. They might love their new father figure. Their father might have been abusive.
You don’t actually care about the kids, you just wanted to feel like you had the  moral high ground and shame her for living and daring to date. It  is slut shaming and her kids will one day see the comments from people like you attacking their mother.
News
General
Opinion
True Crime
Politics
Sport
Explainer
Entertainment
Celebrity
Reality TV
Movies
TV
Books
Rogue
Royal
Lifestyle
Beauty
Fashion
Weddings
Home
Wellness
Health
Fitness
Travel
Food
Parents
Before The Bump
Pregnancy
Baby
Kids
Teens
School
Parent Opinion
Work & Money
Money
Finance
Career
Lady Startup
Relationships
Sex
Dating
Separation
Friendship
Family
Real Life
Couples