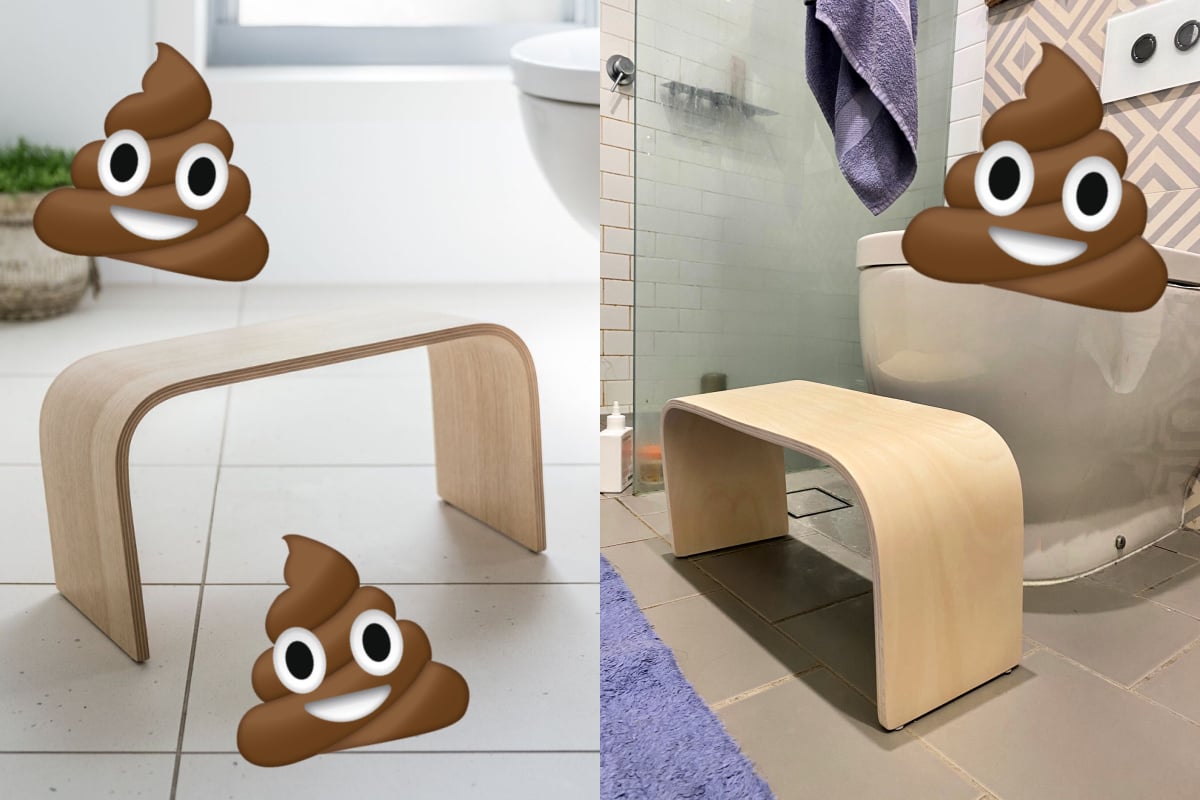 Hello and welcome to a story about a woman and a poo stool. No pun intended.

You may have already heard of a poo friend, and maybe even a poo knife. But today, I'm talking about a stool to help you sh*t.

WATCH: Here are 10 scientific ways to be happier, post continues after video.

The stool in question - the one you put your feet on - is the PROPPR Essential Bathroom Footrest.

When it launched on Gwyneth Paltrow's lifestyle website Goop (yep, the same one that sells vagina candles and was home to the infamous yoni egg) for a modest US$220, it sold out immediately. Luckily for us, there's a version that costs only AU$155.

But it has to be said, $155 is still a large sum of money to spend on a stool that'll sit by your toilet. So when I was sent one to road test, I couldn't let you down.

Keep scrolling for some thoughts and feelings on this very posh poo stool.

What is a poo stool?

A poo stool, also referred to as a bathroom footrest or footstool, is exactly what the name suggests.

It's not just any stool, though. The stool must be a very specific 22cm-24cm centimetres high to ensure you can sit on the loo in the ideal 'prop zone'. (More on this in a bit.)

One such footstool - the Squatty Potty - has a cult-like celebrity following including Sally Field, Jimmy Kimmel, Howard Stern and Bryan Cranston.

There are lots of different types of stools out there. The PROPPR is Australian-designed by an Aussie colonic hydrotherapist and gut health specialist. It comes in three timber finishes and three in waterproof Anti-microbial acrylic. 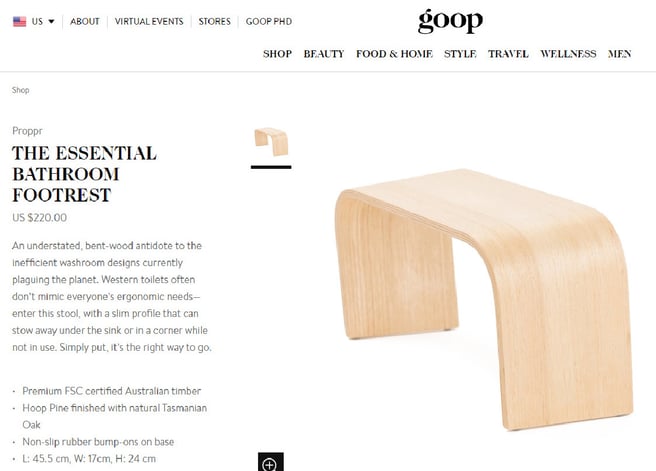 If it's good enough for Gwyneth... Image: Goop.

Why use a poo stool?

Given a man called Pete Evans raves about the powers of poo stools, you might think this 'bowel management aid' is a load of crap. But scientifically and anecdotally, some people, even in the medical profession, swear by them.

The idea behind poo stools is that before the modern Western toilet came into our lives, humans would squat to do a number two. If you've travelled through Asia and some Eastern European countries, you might have already come across squat toilets.

Rather than sitting with your bum flat on a toilet seat and your feet on the ground, footstool converts reckon our bodies are designed to do our business in a squat position for optimum bowel health, and to avoid issues like constipation, irritable bowel syndrome and other gut ailments.

Only, it'd be unhygienic, uncomfortable and awkward AF to jump up onto a modern toilet seat to squat, wouldn't it?

Hence, a footstool that positions your hips in the ideal spot to "release the muscle holding a kink in your colon" so you can "pass waste with ease". 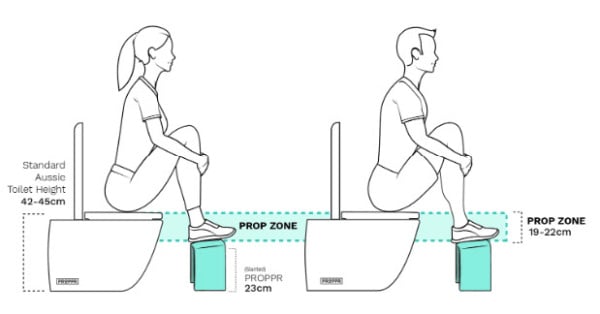 Turns out this is how you're meant to poo. Huh. Image: PROPPR.

But what do experts think about all this?

One study found it takes, on average, less than a minute to achieve 'full elimination' when sitting in a deep squat.

TIME also published the results of another study, which found of more than 1,000 bowel movements, 90 per cent of people who used a poo stool strained less, and 71 per cent had faster bowel movements.

Sounds great in theory, but what is it like using one and does it really make a difference?

What did I think of the poo stool?

Look, I'm not going to go into unnecessary detail here.

I kept this stool in my bathroom for about a month, and if I'm honest, I probably only used it half the time. It's an extra step, you know? If you've got a small bathroom like me, it takes up too much space to have it sitting out all the time, so I'd forget in the heat of the moment.

That said, this particular stool is very aesthetically-pleasing and non-offensive. When I pictured a poo stool, I thought of a rickety wooden thing, but it's actually very... chic. It might be the nicest thing in my bathroom. 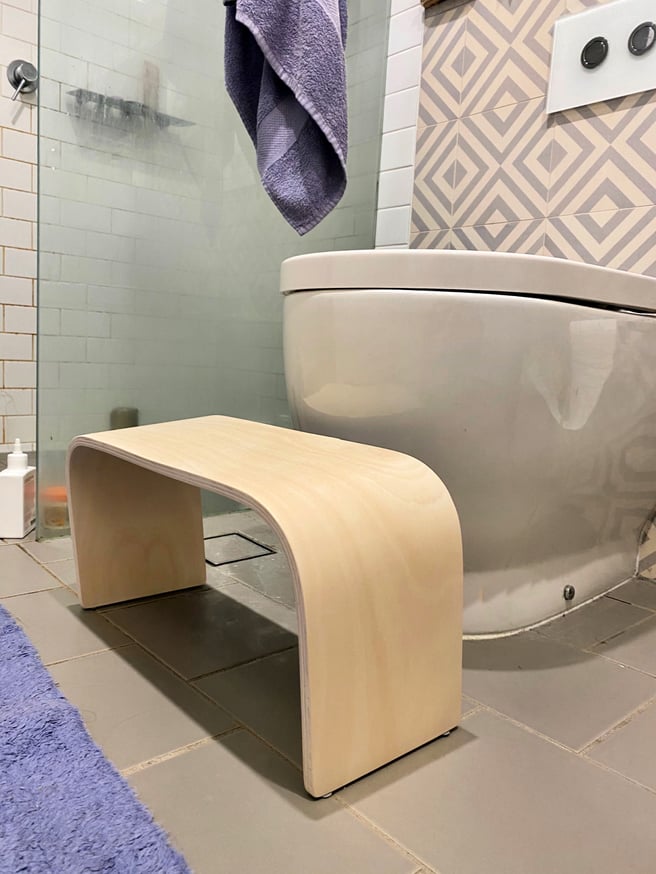 Actually sitting on the loo with your feet on the stool isn't too uncomfortable, but it takes getting used to. You might be right if you do yoga or Pilates, but for those of us who don't, you'll have sore hips after using in the beginning.

Did I really notice a difference for my gut health? I can't say for sure, but I don't doubt it works wonders for some.

What I do know is I'm neither dedicated enough nor in a financial position to be spending on a fancy poo footstool. But grab a measuring tape and a few shoeboxes and you might just be able to make your own.

Or books! Who doesn't have books lying around? Sorted.

Would you try a poo stool? tell us your thoughts in the comments below!

Reply
Upvote
I scavenged a milk crate during the annual neighbourhood disposal week - it's the Ducks Guts I tells ya.
My bowels are rejoicing (ok, that sounded kinda'weird) but you know what I mean
F
flyingdale flier 2 years ago