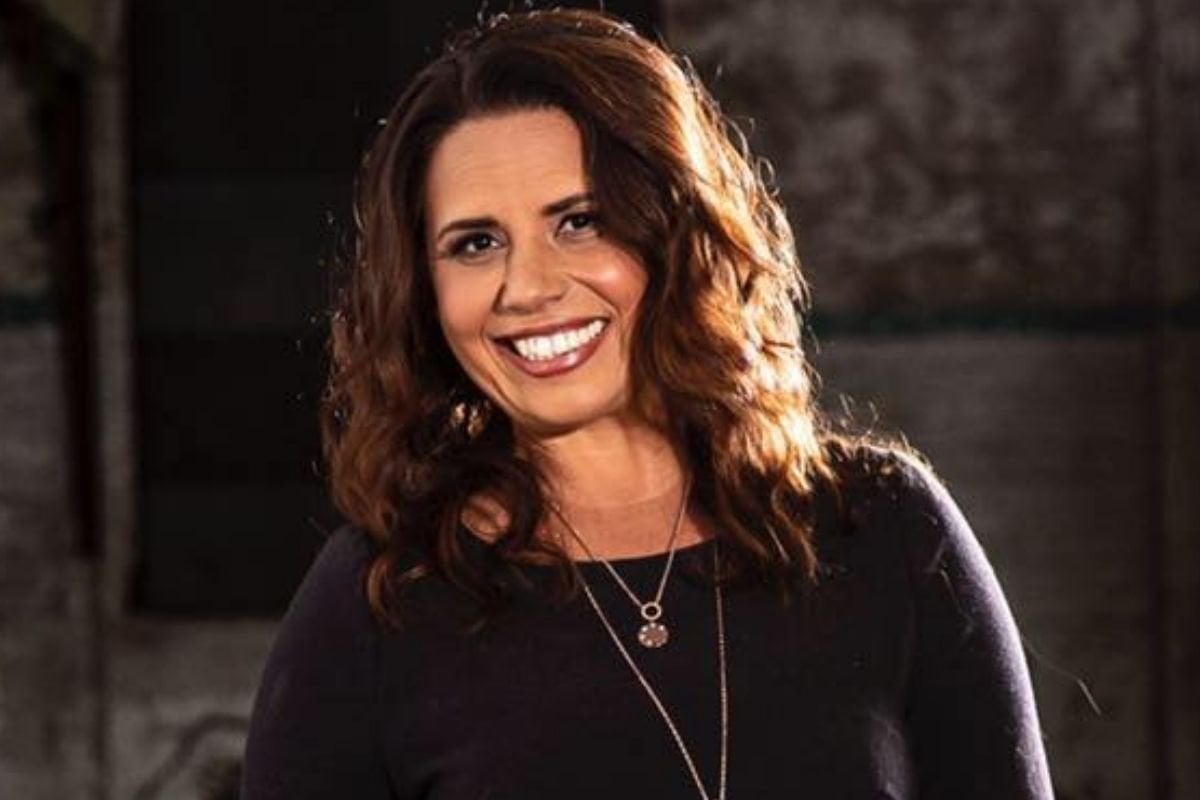 A couple of weeks ago, Tanya Denning-Orman's mum couldn't wait to tell her about the conversation she'd had in a hair salon in the small town of Rockhampton, Queensland.

"She was so proud to tell me," the Birri and Guugu Yimidhirr woman, and director of Indigenous Content at SBS and director at NITV told Mamamia.

In 2021, Tanya now lives in a reality where her children wouldn't know a world without an Indigenous channel. But go back to her childhood in a small regional mining community, and you only really saw Indigenous Australians on the news. And it was always in a negative light.

Watch: Tanya talks about her childhood. Post continues after video.

Go back to her mum's childhood, and she was living on an Aboriginal mission after her family were removed from their traditional lands under the Aboriginal Protection Act of 1897 which took away their basic freedom of movement, labour, custody of their children, and control over their personal property.

As Tanya explains, "My grandfather had to ask permission to marry my nanna and take his family to live and work outside the mission. He had to ask for his and nanna's salary which they never got - it went back into the mission and the QLD government."

The trauma of what her family lived through will always be there, but in 2021 Tanya says our current generation of Aboriginal Australians take on a "really complex experience" in that they can't change history, but they can commemorate what happened and keep reminding their fellow Australians of our shared history.

Last year, during the Black Lives Matter protests, NITV found themselves in a unique position. They usually have two big content pillar points they work towards to make sure they leave a mark on the Australian psyche - NAIDOC week and January 26. That's when they know the conversation of nationalism and identity will naturally be there, and they can do their bit to ensure the public is informed about Indigenous issues.

But in 2020, as thousands took to the streets in America after the death of George Floyd at the hands of police, NITV were given a new opportunity to show how important their voice is in the Australian media landscape.

"What that movement did was give us that trigger to really switch gears and take the conversation to where it needed to go. This opportunity arrived when other media were like 'oh this is a protest happening over in America', and we were able to say 'well actually it's happening in our backyard Australia, and it's been happening for a very long time'."

OPINION: What's happening in the United States is happening here in Australia, and has been happening for longer than people would like to acknowledge https://t.co/pVFBsujruN writes Dr Stephen Hagan.

As Australia proved that it was finally ready to listen, NITV were waiting in the wings with the content, and enjoyed an increase in audience as more and more people went in search of Indigenous stories.

"It was what we were set up to do. We are extremely proud of our network's ability to jump and push and deliver the stories in whatever way people wanted them - children's shows, documentaries, series. We had been preparing I guess. And that's because all of our documentary makers for years have been wanting to shine the light on issues happening within their communities."

Since the 1991 Royal Commission into Aboriginal Deaths in Custody, 437 First Nations people have died in custody. It's a devastating figure given the Commission handed down 339 recommendations that aimed to curb that number.

But of all the failures (and there are plenty), NITV is one of the handful of recommendations that has proved fruitful. And Tanya has been there since the channel's very beginning.

"It was recommended that Indigenous people need to be able to see themselves in all aspects of life in media, be in control of media, and be portrayed in positive light and not just on the news. We switched on, on Friday July 13, 2007 during NAIDOC week, and we knew we needed to make it work. It's been little building steps... but when we became available on free-to-air TV in 2012, it was that next step that allowed us to commercialise and create more content," she told Mamamia.

While Tanya is proud of how far they've come, and she wants to celebrate that. She acknowledges that they've still got a long way to go - a point made even more poignant tomorrow, on January 26.

On this day in 1788, the First Fleet came to our shores. The arrival of European settlers led to massacres, the forced removal of children, slave labour and attempts to destroy the languages and cultures of the oldest known civilisation on earth. And yet Australians are encouraged by our government to wear green and gold, and celebrate with a barbeque and a public holiday.

To Indigenous Australians, January 26 is a day of reflection, mourning and healing.

"I am not feeling there is that change [towards rejecting the celebration] social media wise, but I do feel like we are having a more informed discussion. The Hottest 100 have changed their date, advertising is looking very different to what it did five years ago in that you don't see Australian flags in the Aldis and Woolworths as much. So things are starting to change," said Tanya. "But then you look at what people are saying [on social media], and you think, we've still got so much to do."

NITV invites audiences to enhance their understanding of January 26 through its Sunrise Ceremony and programming slate https://t.co/MOM9FAeDuT via @TV Blackbox

Tanya was 10 when she first saw an Aboriginal woman reading the news on TV. The now 44-year-old remembers it as a milestone moment - the first time she realised she could aspire to be her. For a little girl growing up in regional Queensland, female Indigenous voices were few and far between.

Fast forward 30 years and Tanya has truly become the woman she couldn't see. She's one of the youngest television executives in Australia, and one of a handful of Aboriginal women in a leadership role. In 2021 she's proudly leading an experienced all-Indigenous content editorial leadership team, determined to steer NITV into its next phase of growth.

"At least my children and nieces and nephews are growing up in Australia where at least the information [and representation] is more available," Tanya told Mamamia. "Whether or not the vast majority of Australians are getting to see it, that's our next big challenge."