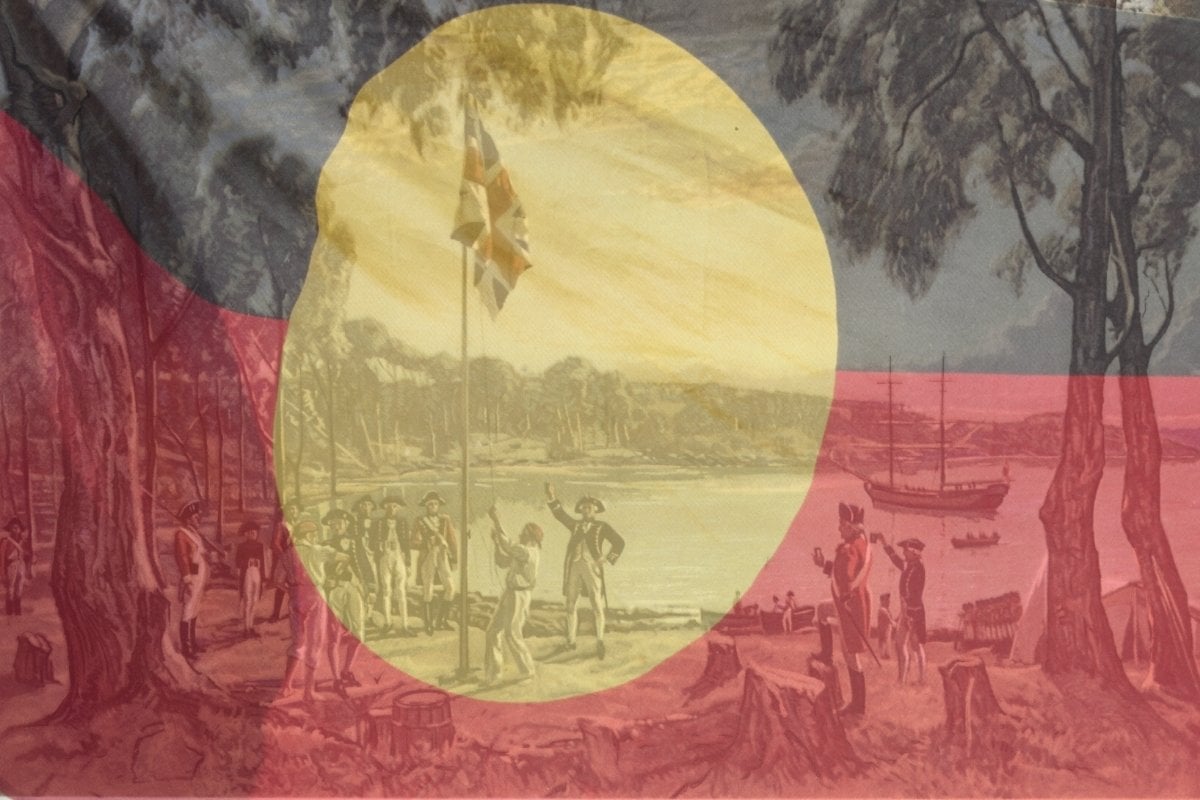 WARNING: Aboriginal and Torres Strait Islander readers are advised that the following article contains images, names and descriptions of people who have died.

Mamamia only refers to January 26 by its date, to acknowledge that it is not a day of celebration for all Australians. If you want to be an ally this January 26, we urge you to sign this letter to your MP about the Uluru Statement from the Heart – which calls for constitutional change and structural reform that recognises the sacred, ancient spiritual link Aboriginal and Torres Strait Islander people have to their land.

Every year, as January 26 approaches, Australians raise the same difficult questions about our shared history and national identity as we reflect on what’s worthy of celebration and what that celebration should look like.

Watch: How to be an ally to First Nations people on January 26…

But as we tussle toward that date for yet another year, it’s worth taking a step back for a moment and considering the facts.

Research published by The Australia Institute in 2018 revealed that only 38 per cent of Australians know that.

Yet, it’s the very source of the heartache around January 26.

When Captain Arthur Phillip raised the Union Jack on the Port Jackson shoreline on January 26, 1788, and proclaimed British sovereignty, he did so on the land of the Eora people.

As well as signalling the beginning of dispossession for a culture that had thrived for 80,000 years, the invasion also resulted in the deaths of thousands of First Nations people through the introduction of European diseases.

According to the National Museum of Australia, a smallpox epidemic that broke out the year after the arrival of the First Fleet is estimated to have killed up to 70 per cent of the First Nations population living in the Sydney Basin.

It wasn’t until 1935 that all states adopted a common date — January 26 — and name for "Australia Day". Prior to that, colonisation was marked on a variety of dates under a variety of names.

Sydney colonialists referred to January 26 as “First Landing Day” or “Foundation Day” and celebrated with anniversary dinners and, later, an annual regatta on the harbour.

By the centenary of colonisation in 1888, it was referred to as “Anniversary Day” and was a holiday in all capital cities except Adelaide. But after the federation of the states into a single nation — the Commonwealth of Australia — in 1901, the push for a nationwide holiday ramped up. And so, in 1905, Empire Day was introduced on May 24, the late Queen Victoria’s birthday.

The first event referred to as "Australia Day", however, was held 14 years later on July 30. And that was to raise funds for the First World War.

In the 1940s, after the 1936 refocus on January 26, Australia Day became a nationwide public holiday. But it wasn’t until 1984 that the Federal Government formalised its role in planning Australia Day celebrations by creating the federally funded National Australia Day Council, and another 10 years after that when the celebration was fully established.

3. The so-called ‘Australia Day debate’ was happening as early as the 1800s.

In 1888, as the colony of NSW planned centenary celebrations for January 26, a discussion was had in Parliament about ways to aid the disadvantaged members of the community.

When it was suggested by one MP that “we ought to do something” for First Nations people on the day, Premier Sir Henry Parkes quipped back, “And remind them that we have robbed them?”

Fifty years after the centenary, more than 100 First Nations people convened for an ‘Aborigines Conference’ and declared January 26 to be “a day of mourning and protest”. Participants protested “the callous treatment of our people by the whitemen during the past 150 years” and asked for new laws to grant citizenship and equality to First Nations people.

The same day, a group of First Nations men were forced to participate in a reenactment of the First Fleet landing in Sydney. According to the National Museum of Australia, they had been brought in from the rural town of Menindee and locked in stables at Redfern Police Barracks prior to the event: "On the day itself, they were made to run up the beach away from the British — an inaccurate version of events. Film footage of the re-enactment clearly shows that the men were not willing participants."

5. The largest protest over January 26 was held 32 years ago.

In 1988, Bicentenary celebrations were held around Australia. There were concerts, a commercial featuring famous Australians singing about celebrating "the creation of a nation", a reenactment of the landing of the First Fleet and colonisation, and a convoy of tall ships that sailed down the coast into Sydney Harbour. Two million people lined the Sydney foreshore to watch.

But those onlookers weren't the only mass gathering that day. The event was countered by a protest of 40,000 people who marched through Sydney calling for land rights for First Nations people and highlighting the complete erasure of their voices and history during the celebrations. Several prominent First Nations leaders and activists spoke, including Gary Foley (co-founder of the Aboriginal Tent Embassy outside Parliament House), who said, "It's so magnificent to see Black and white Australians together in harmony. This is what Australia could and should be like."

At the time, it was the largest demonstration in Australia since the anti-Vietnam War protests of 1970/71.

6. Most Australians associate Australia Day with... a holiday.

A McNair yellowSquares national poll commissioned by The Guardian in 2017 found that 68 per cent of Australians felt positive about Australia Day. But the same poll also hinted to a possible explanation for why...

The three words most identified by respondents as associated with "Australia Day": barbecue, celebration and holiday.

For First Nations people, none of those were ranked among the top three. Theirs, instead...

S
shauna020473 4 months ago
Reply
Upvote
1 upvotes
I find most of the Australia Day spectacle pretty ugly, starting with a tone deaf celebration ón the back of others’ suffering, followed by ridiculous jingoism and drunken flag worshipping. Is this really who we are as a country? Compared to that, just taking a quiet day off to go to the beach is the sane response.
M
mb1111 4 months ago
Reply
Upvote
1 upvotes
I think that rather than changing the date that we should scrap the date and the public holiday.  What will changing the date do?  It won’t change the history.  Making it another date will change be a celebration of the same thing on a different day.
S
snorks 4 months ago
Reply
Upvote
@mb1111 you don't think Australia is worth celebrating?
M
mb1111 4 months ago
Reply
Upvote
1 upvotes
@snorks I do. I’m a first generation Australian whose parents fled communism so that their kids would have opportunities. If I had not been born here I would never had the opportunity to have an education, a career etc etc. I love Australia and the opportunities that I took advantage of. . I am just so sick of the Australia Day circus. I believe whatever day you theoretically change it to will not satisfy anyone. People will either be outraged it has changed or outraged that we are celebrating colonisation. It’s no win.
News
General
Opinion
True Crime
Politics
Sport
Explainer
Entertainment
Celebrity
Reality TV
Movies
TV
Books
Rogue
Royal
Lifestyle
Beauty
Fashion
Weddings
Home
Wellness
Health
Fitness
Travel
Food
Parents
Before The Bump
Pregnancy
Baby
Kids
Teens
School
Parent Opinion
Work & Money
Money
Finance
Career
Lady Startup
Relationships
Sex
Dating
Separation
Friendship
Family
Real Life
Couples