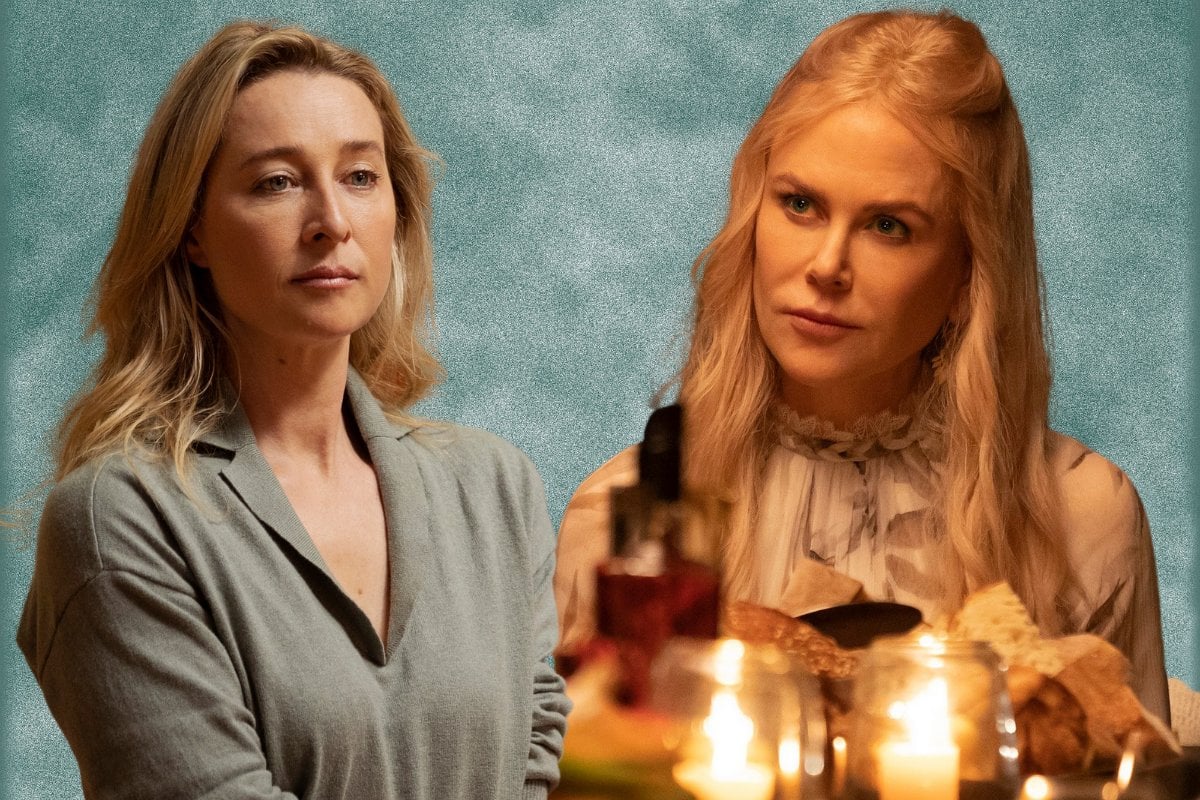 On the surface, Nine Perfect Strangers appears slick and luxurious, but much like the fictional world it brings to life, what went on behind the scenes is a much more harrowing story.

Amazon Prime Video's new eight-part drama, which is based on the best-selling book of the same name by Liane Moriarty, tells the story of nine people from very different worlds who gather at a health and wellness resort called Tranquillum House. All in a bid to transform their lives, which are all broken in different ways.

The retreat is run by the mysterious Masha (played by Nicole Kidman sporting a thick Russian accent she apparently never let drop throughout the entirety of filming) who bans substances such as sugar, alcohol, and drugs from the premises but has other secretive ways of prompting her guests to spill their darkest secrets.

The success of Nine Perfect Strangers was always going to live and die on the performances of the main cast, and it's their collective on-screen chemistry and nuanced performances that elevate the show's storytelling, with their slowly unravelling backstories keeping you hooked in until the very end.

Melissa McCarthy stars as a romance writer named Frances, who is still stinging from a career failure and a personal betrayal.

Her initial antagonist at the retreat is Tony, a seemingly hostile and lonely man who she slowly starts to gravitate towards.

It's worth noting that Tony is played by Bobby Cannavale, who portrayed Melissa's love interest in her last film, Superintelligence. Which explains why their performances seem so mesmerisingly in sync here. 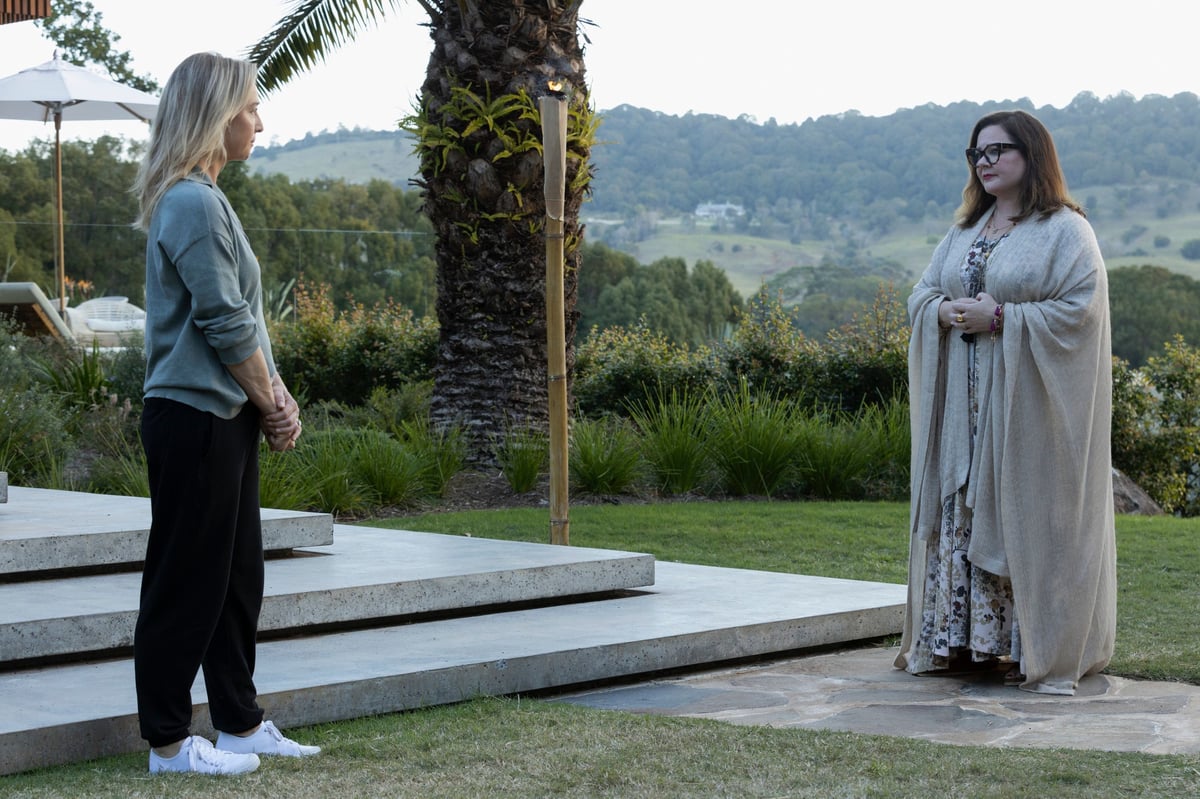 Rounding out the group of strangers is Regina Hall as Carmel, a wounded single mother who is hiding her anger, Luke Evans as Lars Lee, a man who is definitely not chasing wellness and Samara Weaving as an influencer named Jessica who has arrived at the retreat with her husband Ben, played by Melvin Gregg, in an attempt to save their marriage.

While filming the adaptation of a beloved novel, against the beautiful backdrop of Byron Bay in northern New South Wales alongside a star-studded cast might seem like a dream job, Nine Perfect Strangers star Asher Keddie, who plays Heather Marconi, confirmed that just like the show itself, danger was lurking beneath perceived perfection.

"So in the show my husband, played by the amazing Michael Shannon, and our daughter played by Grace Van Patten, have come to this wellness retreat exactly three years after their son Zack took his own life. They are there to escape but also to reconnect with each other.

"But of course they, like all the other strangers there, really have no idea what is to come during this ten-day retreat and what shape their journey is going to take.

"It is unpredictable, it's confronting, and really unapologetic, I have to say." 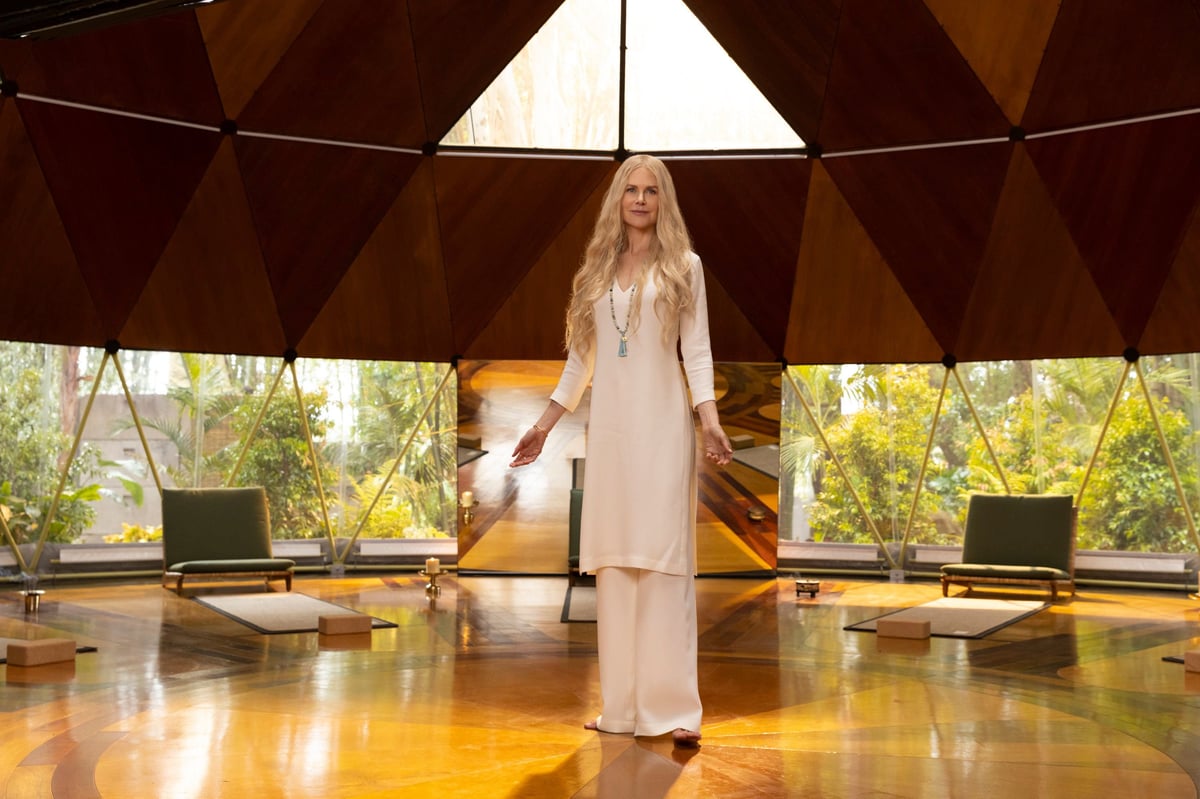 Nicole Kidman as Masha in Nine Perfect Strangers. Image: Amazon Prime Video. The 47-year-old actress said the cast grew incredibly close while filming the series, thanks to the emotional subject matter they were working with. And the fact that they were not permitted to step outside the show's COVID bubble.

But she was also quick to caution the filming experience was more extreme than just enjoying those Instagram-worthy Byron Bay sunsets.

"The environment was so glorious," she explained. "But there were times when we were shooting at the river, and there were snakes, it was very hot and we were sitting on rocks. It was pretty intense. The physicality of it was hard and I'm glad you asked about that, no one ever asks about that.

"With the physicality of playing a role like this, where someone is holding so much grief in, it is actually really rigorous.

"It wasn't just the psychological investment I had to put in. Physically I was finding at the end of each day of shooting that I had quite a bit of pain throughout my own body. All because I was holding myself in a contained way for a lot of the shoot."

Asher explained that delving into Heather's unimaginable grief, mourning a child who died by suicide, was the most difficult part of the filming process for her.

The actress is a mother to her stepson, 12-year-old Luca, with her husband Vincent Fantauzzo, and the couple also share a second son, Valentino, who is six.

When viewing the finished Nine Perfect Strangers series, Asher said there is really only one scene that she struggles to watch back.

"The hardest scene for me to watch back is a scene where Heather connects with her child who has passed away," Asher told Mamamia. "It's the most difficult scene for me to watch purely because it just pulled me straight back into how it felt to shoot it. To feel the joy of connecting with him and hearing him. Then she has this beyond painful moment of realisation that she may have been responsible for his death. That was so difficult for me to shoot.

"It was often very painful to watch them go through this journey together, but I'm hoping it's relatable. For me as an actor, it was about imagining the unimaginable."

Alongside this exploration of grief, Asher said the series is also darkly funny and has an ending you'd be hard placed to predict.

"One of the themes of the show is looking at how far will we go to achieve 'wellness'," Asher said. "What is wellness and what would we all really give up to regain something we have lost? That was front and centre for all of us, while we were shooting. This desperate, deep need to reconnect. How far would you go to achieve that?

"So, whether it's viewed as sinister, or just orchestrating and manipulating people in a way like Nicole Kidman's character Masha is doing, as you move through to the final episode you'll find this out.

"The show is really entertaining in its unpredictability and it's moving, because the writing is just so good. I'm hoping the show ignites the same questions for the audience as it did for us when we were filming.

"Maybe then we'll start to do more collectively together, as opposed to thinking we need to handle things alone. That's what I hope."

...played by Nicole Kidman sporting a thick Russian accent she apparently never let drop throughout the entirety of filming...