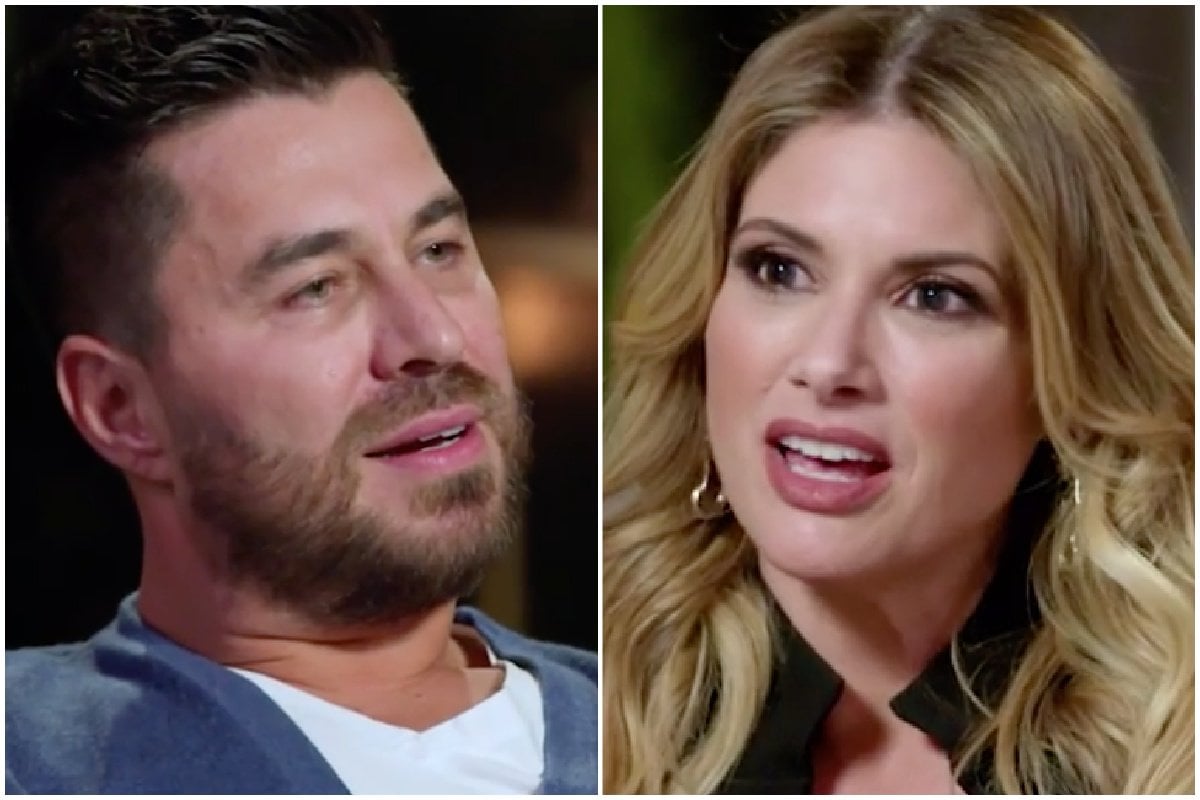 When Coco decided to wear a see-through body suit with a g-string underneath to the dinner party, she didn't expect everyone to spend the next day talking about two grown men and their silly fight. Now she feels like she wasted her best outfit and it's not like she can wear it again because she already wore it on national television??? 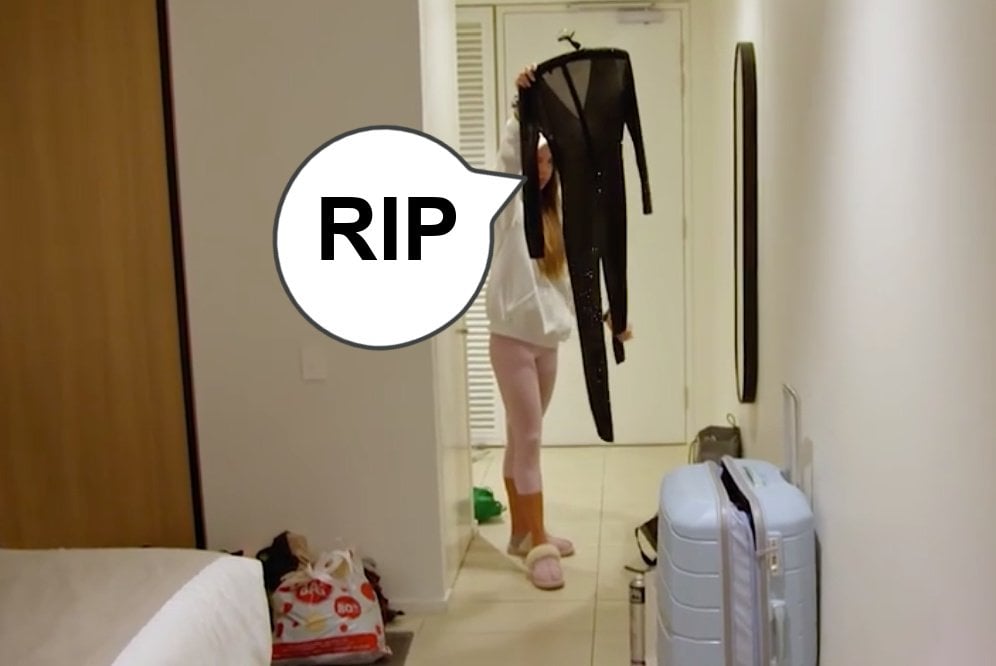 Patrick is eagerly waking up Belinda because he wants to gossip already. He needs to talk about the naughty boys who did the bad behaviour, and how he was the innocent victim in a water throwing incident. He's disappointed that Mr John Aiken didn't intervene and give Patrick special attention to show everyone that we can't just be throwing glasses across a dinner party when we're men in our 30s.

Meanwhile, in Bryce and Melissa's room, Bryce is explaining that their relationship is perfect and everyone is just jealous and somehow we don't think that's... it. Sir.

But SHUT UP because Cam is visiting Coco before the Commitment Ceremony to ASSURE HER that he appreciated the g-string.

He walks in when she's midway through her make up which is a) rude and b) a failure to understand how the courting process works and how necessary mascara is to complete a look?? Like just give a woman a 15 minute heads up? She didn't wear a skintight body suit last night with wedding make up for you then to see her half-done the next day???

He compliments Coco on her outfit and now she doesn't feel so embarrassed. He apologises for not 'having her back' at last night's dinner party (you were silent and acted like you'd never met her but okay), and says it was only because he 'didn't see it coming'. 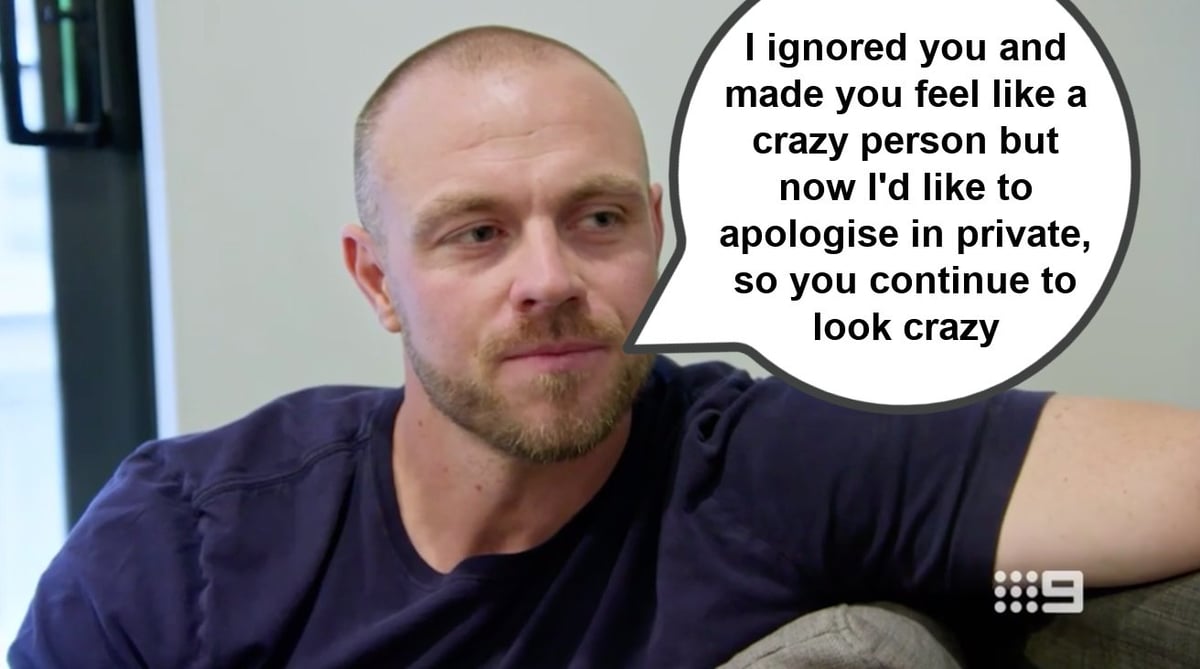 Suddenly, they start hooking up and guys it's 7.30pm why are you moaning.

Coco has a face to finish so she farewells Cam, which means IT'S TIME FOR THE FKN COMMITMENT CEREMONY.

Once all the couples are seated, Alessandra publicly explains that she gave all the couples exercises to do for Intimacy Week and she's excited to check in on how they went, particularly Patrick and Belinda who misread the instructions and unnecessarily stared into each other's eyes for six hours.

Booka and Brett are first on the couch and Booka explains that she dressed up as Oksana the Russian masseuse and Alessandra shouts "FABULOUSO" and we swear in the background we hear Patrick shout "HOLA" and mate quit the Spanish lessons.

But Sir John Aiken doesn't have time for this. It's nice, he thinks, but this isn't why we're here. 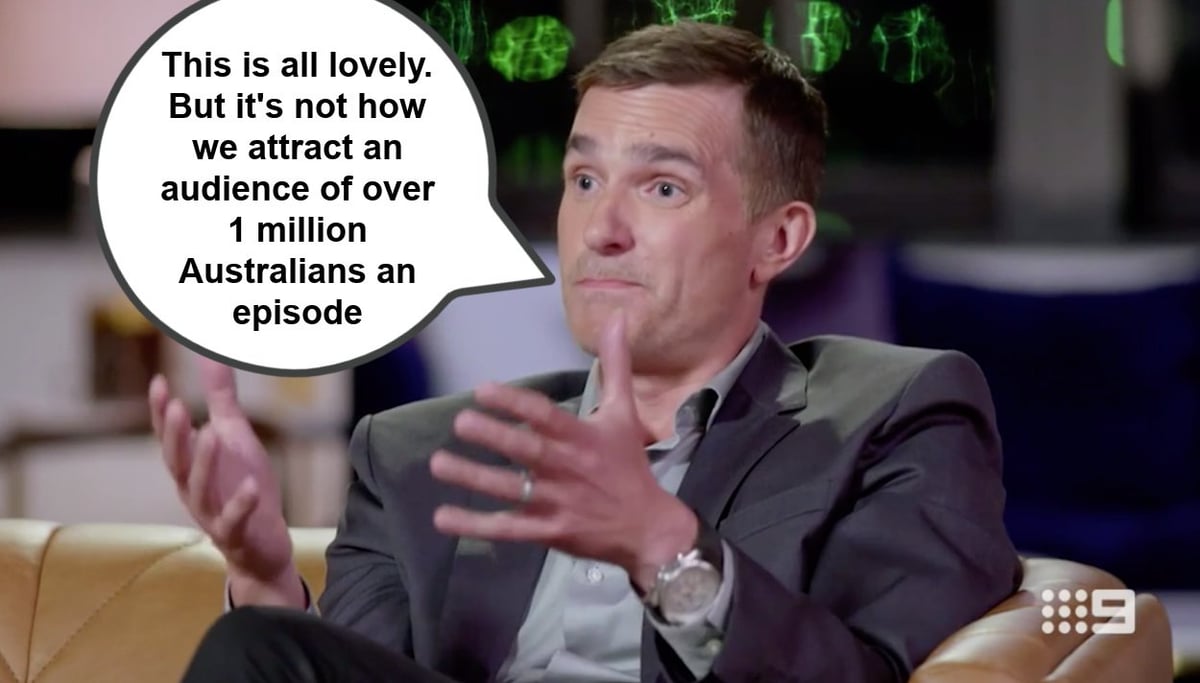 Sorry. But it's not.

He shoos them off the couch and yells for Bryce and Melissa to sit before him.

John Aiken would like to start sh*t, so asks Bryce where the tension with Sam began.

Bryce explains that the first time they met, Sam said to him "Oh mate you look nervous" which was apparently "rude" and WHY IS THAT OFFENSIVE. SAYS THE MAN WHO PUT HIS WIFE FOURTH IN A HOTNESS LINE UP.

Sam, as always, is respectful to Bryce but also to the experts. 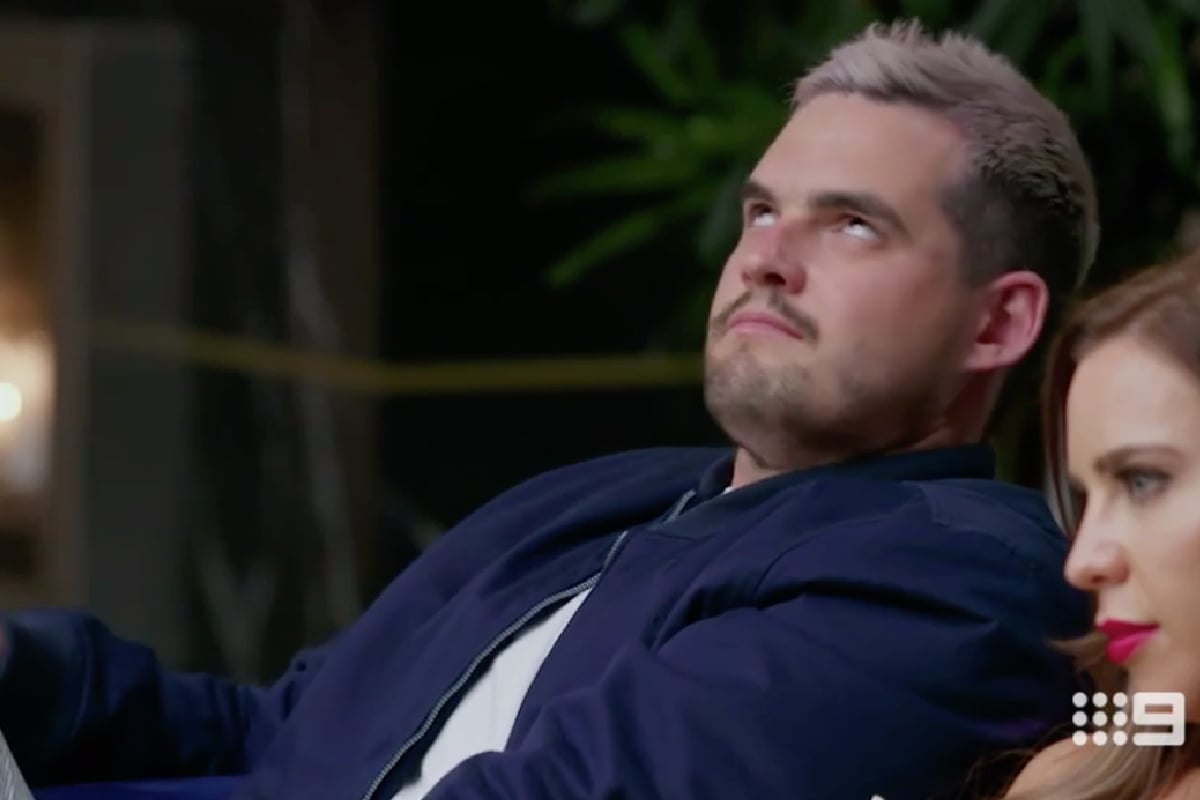 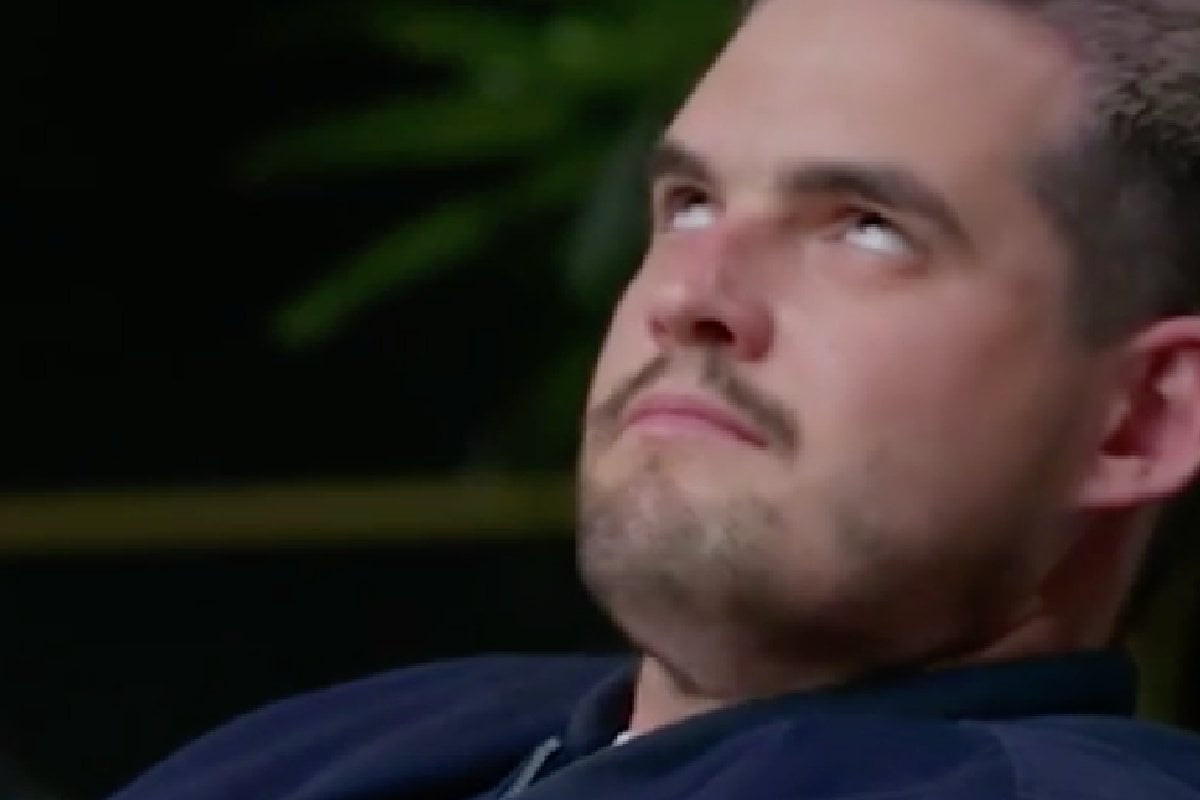 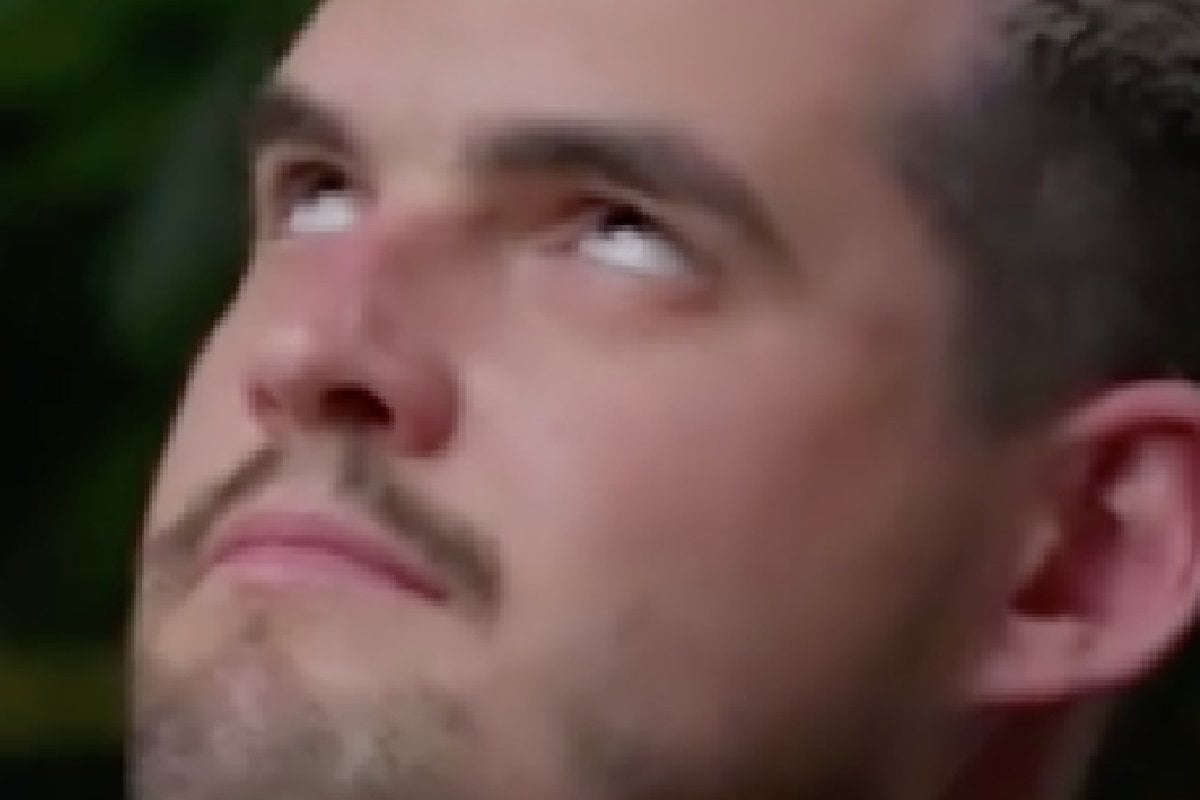 Could stop rolling your eyes for five minutes.

John Aiken is all like "why do you have an anger management problem" "why are you so immature" and "can't you see this is upsetting Melissa" and we dunno, John, why did you match someone with all those qualities with another adult person on a dating show as though this was EVER going to be a good idea?

"Even now you're getting worked up on the couch..." John says and Bryce gets upset because he says this is meant to be about them but John is making it about other stuff. Like no offence but this is John's show and if there's one thing we've learned it's that he'll do whatever the f**k he wants?

When John asks Melissa how she felt last night she says she wasn't thinking about herself, only Bryce. So Melissa no longer has feelings. Or an identity. Which seems healthy. 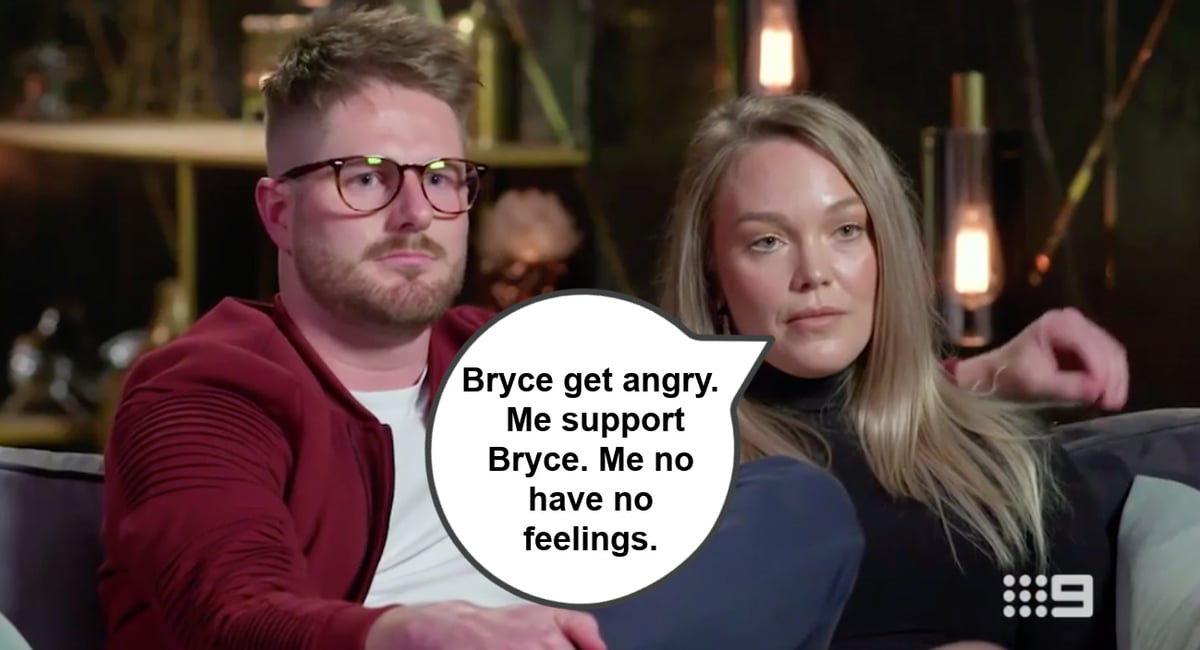 Speaking to the cameras Melissa says: "We're doing so well and people just don't see it..."

BECAUSE YOU'RE BROKEN MELISSA THAT WOULD MAYBE BE WHY.

It becomes clear that all Bryce wanted this week was an award. For Intimacy Week. And how he looked into Melissa's eyes for an extended period of time even though they're green. And not blue. But instead he got in trouble.

The pair leave the couch, and it's clear Bryce is now in a feud with John Aiken. Which is a real plot twist.

Next up are Jason and Alana.

Alessandra says that during the time they spent together this week she "saw a lot of positive" such as the cupping of the genitals etc.

"I have no idea why I teared up," Jason reflects and maybe it was because you were... mortified.

The experts then call Jake and Beck to the couch and we just know that she's going to want to file another formal complaint. Against Jake. For his personality. But also his teeth. 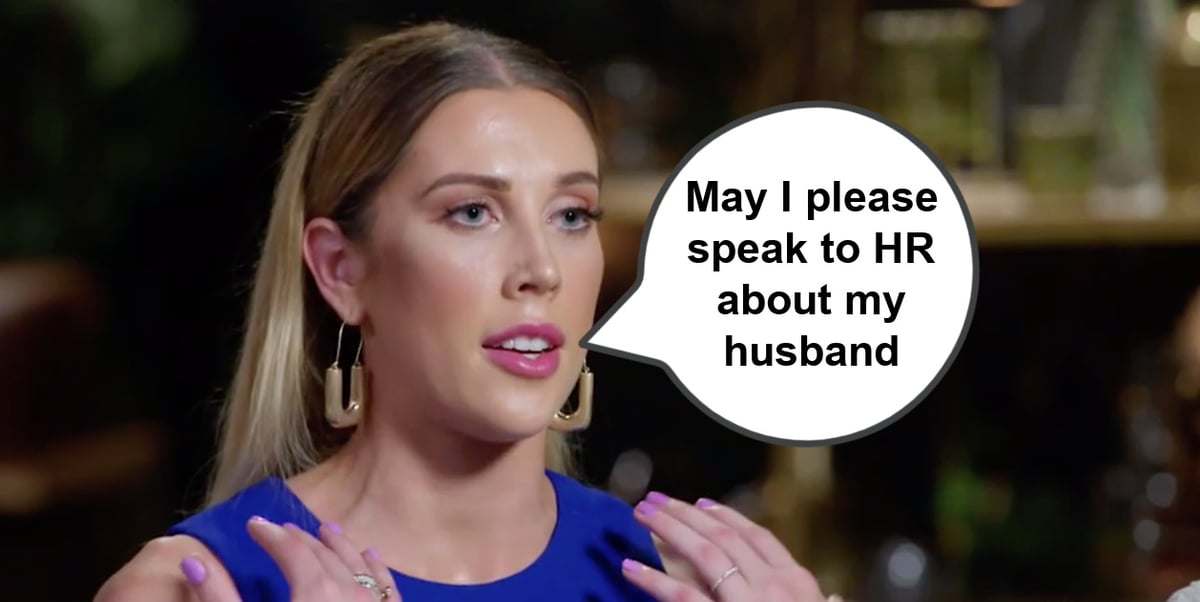 This time she says he's not funny enough/didn't laugh hard enough during their forced laughing challenge.

Jake decides to stay BUT NO ONE CARES BECAUSE IT'S JAMES' TURN AND THIS IS ALL WE'VE BEEN THINKING ABOUT FOR FIVE DAYS AND FOUR NIGHTS.

Jo and James take a seat and James says: "I'm going to come clean and just say something to you..."

"I'm in love with another woman."

We don't get it because he looks super serious and Jo looks... genuinely upset.

"It's Alessandra," he says before fckn weirdly kissing her on the cheek and wtf is going on this is the most embarrassing thing we've ever seen on the television and Russell is currently wearing suspenders unironically.

He then says "joking, joking" and Sir, important question: If it was a joke then why wasn't it... funny.

Alessandra says, "I don't get the joke. I think it’s incredibly disrespectful to Joanne sitting next to you," and we're so uncomfortable. We can't look at this. Someone escort this man out of Australia and put him elsewhere until this memory has been erased from public consciousness. 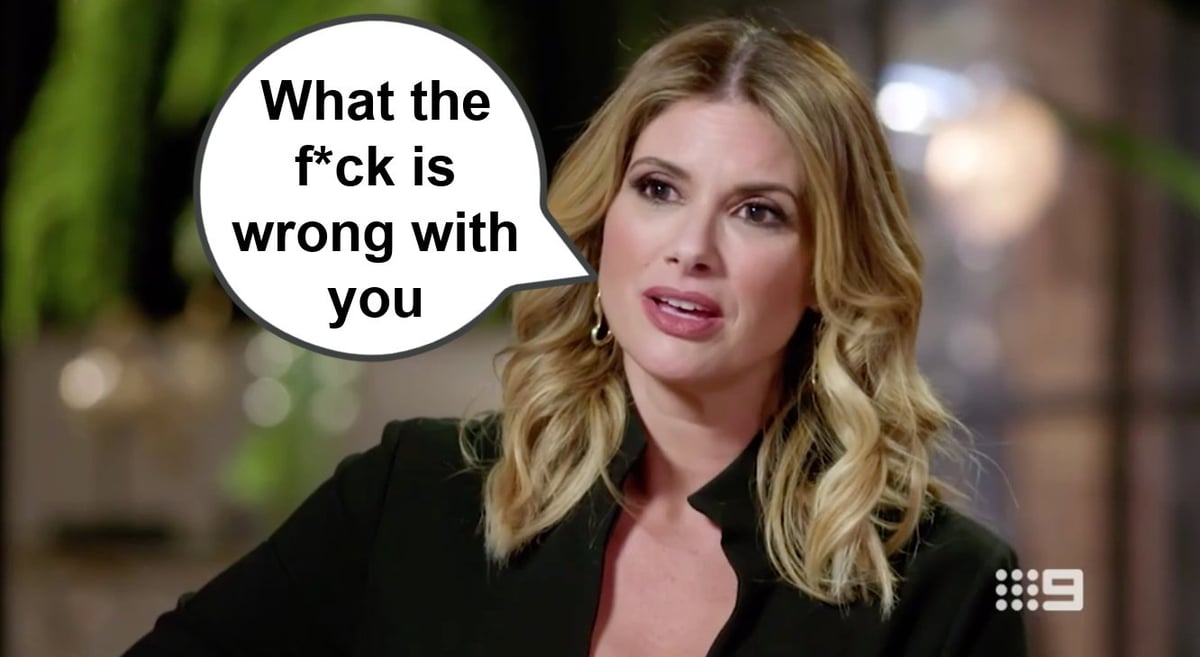 You should get help. From a professional.

Everyone just keeps repeating that it wasn't funny and shaking their heads and WHY DID HE DO THAT. WE. DON'T. GET. THE. JOKE.

Jo and James try to reflect on the week but all we/anyone can think about is James' very upsetting joke that has now ruined the evening.

Unsurprisingly James writes 'Leave' which we feel is a direct response to how badly his prank... went.

Jo writes 'Stay' but is tending to her broken cringe valve and profoundly regrets it. 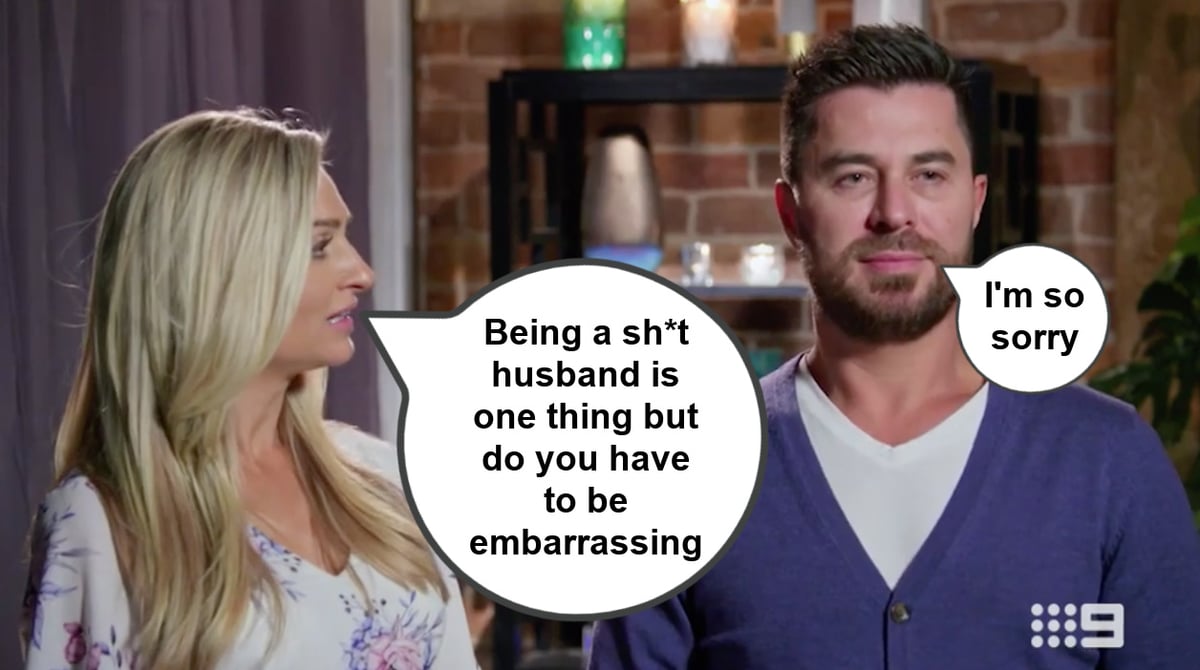 They both have to stay. Which is horrible. Mostly for James.

He then speaks to the cameras.

Next up are Patrick and Belinda.

Patrick tries to make a joke and ummm we wouldn't be trialling... jokes. Tonight. If we were... you.

Beth and Russell are called to the couch and explain their profound apathy towards each other.

John Aiken says it's a shame because there's a lot of good stuff here and "you shut each other out, and it happened early".

Beth mutters under her breath, "No, John. The man didn't know what salmon was."

Beth explains she can't wait for Russell to find his steak-loving, motocross loving wife and almost yells I AM NONE OF THOSE THINGS. LITERALLY NONE OF THEM YOU F**KWITS. YOU HAD ONE JOB. AND YOU GAVE ME MY LOCAL MP.

Both decide to leave, and Russell thanks everyone for their support and reminds them to Vote 1 Russell etc. etc. 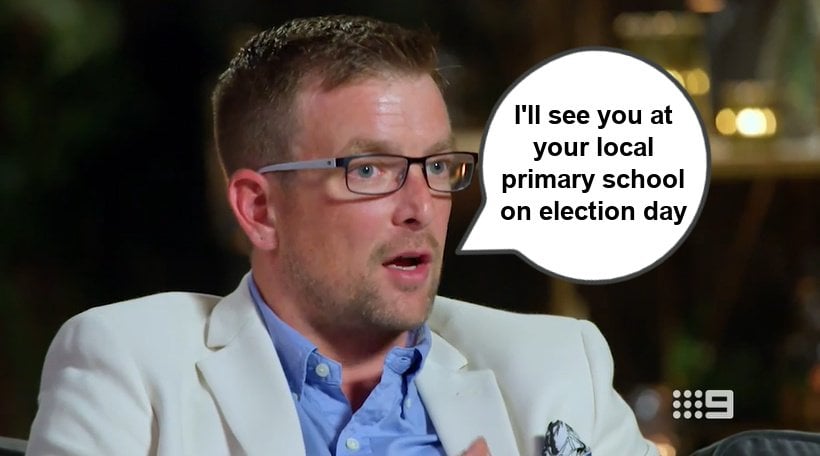 I'll be shaking people's hands a little too aggressively.

And she's wondering why no one, but especially Mel, is complimenting her on last night's outfit.

John tries to get Coco in trouble for maybe a lil bit cheating on Sam with Cam and she shouts "THERE'S BEEN NO ROOTIN'" which is honestly quite a valid defence.

Both Sam and Coco choose to leave which makes us sad for so many reasons, not least because of how triggering Sam is for Bryce, generally.

The last couple are Cam and Samantha who also both write leave and... where's the part where... Cam and Coco can re-enter... as a couple. We thought that was a... given.

Instead everyone goes... home, and we're shown there are more weddings coming which sounds like a truly terrible idea.