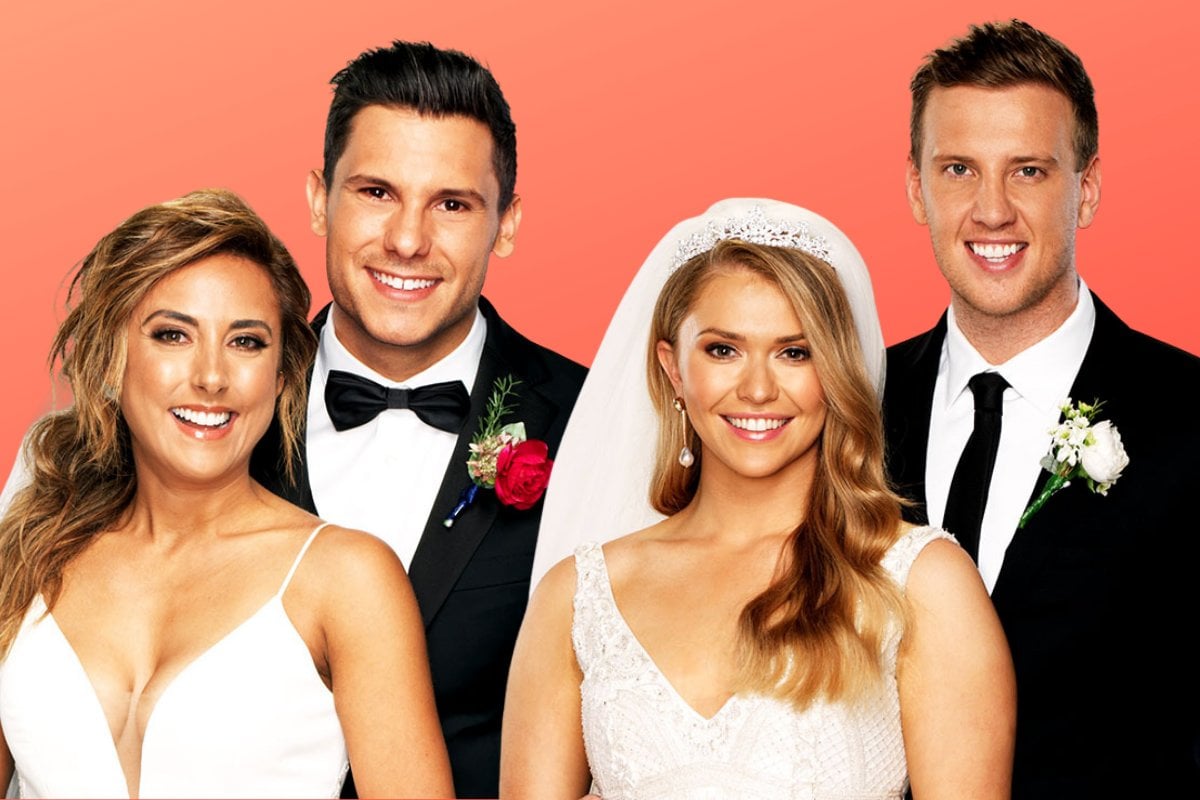 1. Um... it looks like two of the new couples on MAFS could swap partners.

It's only been three days since the Married at First Sight intruders joined the experiment and there's already drama. Surprise, surprise.

On Monday night, we watched Georgia and Liam and Kerry and Johnny get married on the reality TV show. And since then, reports have emerged suggesting that neither couple last.

In fact, these same reports noted that there might be a partner swap between them, and it's Georgia and Johnny that end up together post-show.

According to The Wash, back in December Georgia and Johnny were spotted at the exact same venue a few days apart.

So the theory is, the couple would attend the venue together and then upload their Instagram photos on different days, in an attempt to keep a lid on their romance.

2. Billie Eilish dyed her hair and broke the internet all at the same time.

Billie Eilish has had a dramatic hair transformation. And we're in love.

Since 2019, the 'Ocean Eyes' singer has been sporting her iconic dark black hair with green roots. That was until today when she debuted her new 'do on Instagram.

In a photo and video uploaded to the social media platform, Eilish showed off her '70s shaggy haircut and bright blonde hair. And the Internet is going wild.

Fans of the singer have been anticipating a new look since December when Eilish announced it was "the end of an era".

"It will be the end of an era," she said on her Instagram Live. "I’m going to give you a new era."

This transformation also comes days after the Grammy Awards, where many suggested that Eilish was wearing a wig.

3. Jo just ‘exposed’ James’ controlling behaviour, and we need to talk about it.

Not only was there a rumour going around about Bryce Ruthven's secret girlfriend, but we also got to watch Joanne Todd stand up to her husband James Susler (who has straight up disappeared from their apartment for two weekends in a row).

Speaking to Who Magazine, Jo said she decided to call James out because she "had enough of his ways".

"I thought, 'I’m actually going to stand up for myself and say what I think.' I just explode, I was like, 'I’m done with this guy! He’s lying to me and he needs to be caught out on it.'"

Jo went on to share just how controlling James was behind the scenes.

"He would always choose which restaurant we would go to, he didn't ask me where I would like to go, and if I said I'd like a steak, he'd try and suggest something else," she told the publication.

"If I said, 'This is the best place to go', he'd second guess me. He'd have to go and get a second opinion from the male concierge to see if I was right or not."

While Jo said her and James do "have good banter", being partnered up with him wasn't worth going on the show and leaving her three sons behind.

"At the back of your mind, you know it’s a reality TV show, but I really thought I could meet someone who would want to fit into my life and compromise on things. I don’t think he likes to be told by a woman. It wasn’t worth leaving my boys to be with someone like him."

Married At First Sight continues on Sunday at 7:00pm on Channel Nine.

4. Dash our dreams why don’t you? Looks like Booka and Brett don’t make it to the MAFS finale.

We're sorry to say, but it looks like Booka Nile and Brett Helling don't last outside of MAFS. In fact, according the So Dramatic! podcast, they don't even make it to the final.

"I can confirm that these two are no longer together, and not only that, they don't even make it to the final vows," said host Megan Pustetto.

"A person who knows Brett got in touch and said, 'I know Brett, they definitely do not last. He reckons he's going to get a bad edit, he's back in Geelong and telling people they are not together.'"

Megan also said she "enquired with several contestant and they have all confirmed Brett and Booka do not go all the way".

And just in case we need more evidence that the pair have split, The Wash noticed that Brett, who lives in Melbourne, didn't attend Booka's MAFS viewing party in Perth when the show aired last month.

The Daily Mail also claim that Booka and Brett split in November and their break-up apparently airs on the show after homestays.

For more evidence that Booka and Brett have broken up, and which other MAFS couples have called it quits, read our earlier article here.

It's been a weird week for Pete Davidson.

In the last few days, the comedian has supposedly launched a new production company, announced his secret marriage to a childhood friend, and even welcomed a baby. 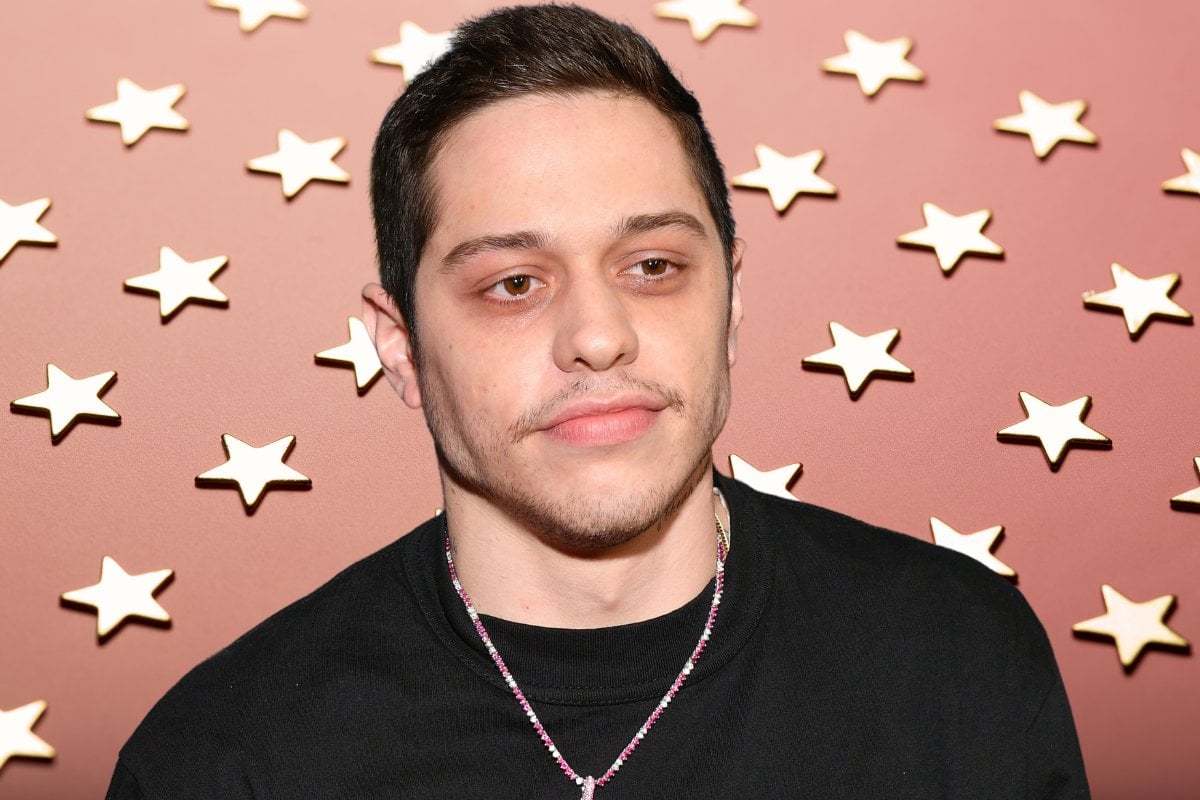 It all started with a fake press release.

On Tuesday, Bodega Cats Presents sent out a press release, claiming they were a new production company founded by a woman named Michelle Mootreddy and her "husband" Pete Davidson.

"Pete and Michelle were childhood friends prior to starting Bodega Cats Presents and are married," the statement read.

The press release also included quotes supposedly from Davidson himself.

"I am really excited to be part of this company and help people get a start in this industry," the quote said.

"I never thought I would do something like this, but I met some of my closest friends doing stand-up, so I felt this was the right thing to do to give back to my community."

On the Bodega Cats website, which has since been removed, both Davidson and Mootreddy were listed as co-founders and co-CEO's of the new production company. 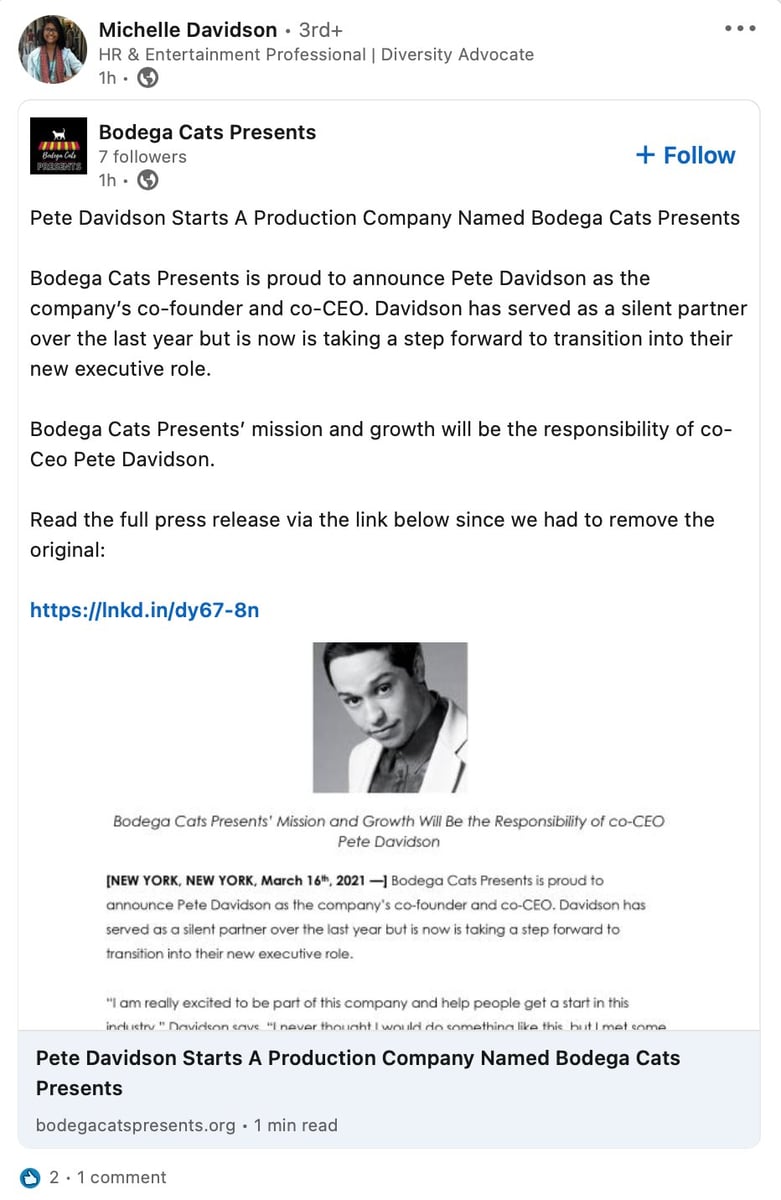 But soon after, the press release was redacted.