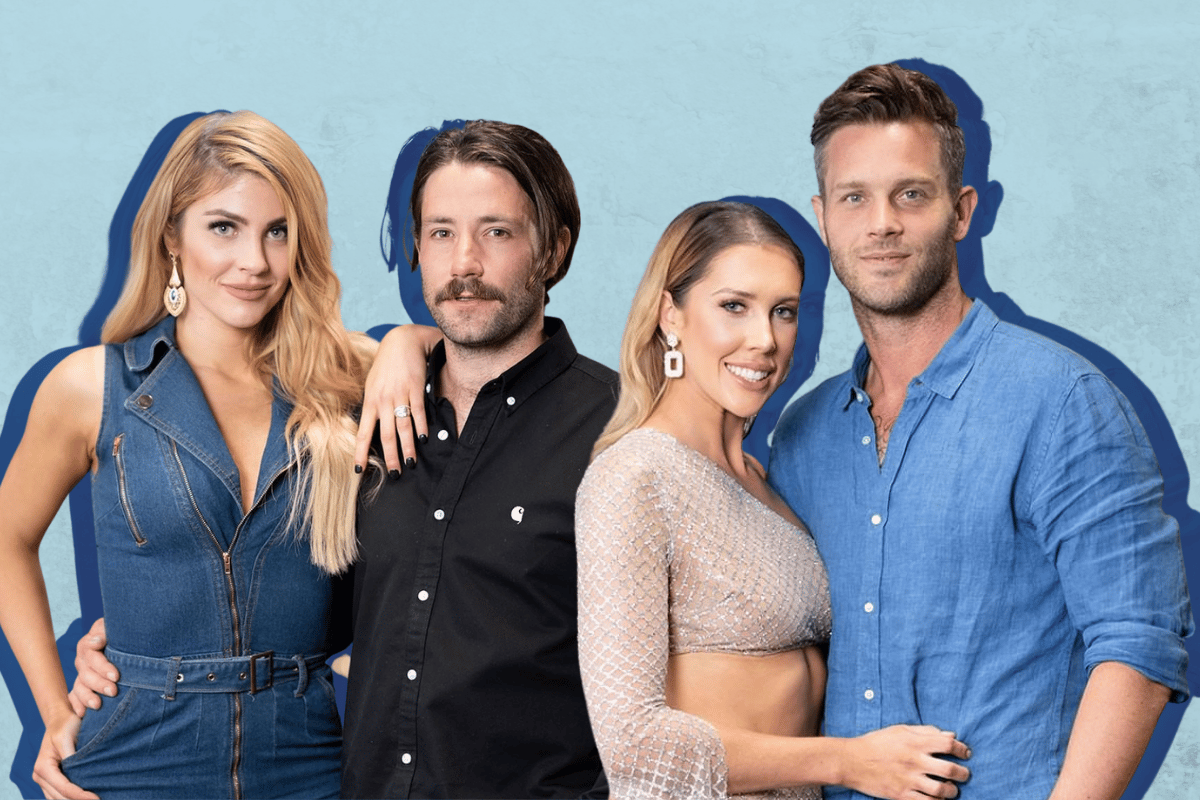 Anyone who watched MAFS last season will that the show was pretty much one steaming pile of mess.

From a cheating scandal, secret girlfriend, a kiss with an old flame and the annual wine throwing saga, the season somehow got more and more chaotic.

But believe it or not, there was even more drama behind the scenes that we didn't get to see.

Watch Melissa and Bryce get some difficult feedback from their families on Married At First Sight. Post continues below.

Yep, according to the contestants there's some pretty messed up things that were edited out from the show.

Here's all the things we've apparently missed from filming.

Two other contestants had partners on the outside before filming.

Apparently Bryce Ruthven and Beck Zemek weren't the only ones who had rumoured flames outside of MAFS.

According to the So Dramatic! podcast, Brett Helling and Joanne Todd also had partners before filming. And Jo's partner even waited for her back home during the show.

A source told host Megan Pustetto that Jo was seeing a man also called Joe, who she now lives with.

"He is thirty and from Langwarrin but they live together in the Pines (pretty much the Bronx of Frankston)... They were dating before the show but she didn’t want to give up her once in a lifetime opportunity after she missed out on Farmer Wants a Wife years ago," the source claimed.

And what more, Joe was apparently sending flowers to her hotel room while she was quarantining before MAFS to "stop her" from going on the show.

"He also sent her flowers and a note during her honeymoon."

Megan crossed check the gossip with a contestant who said they even had a photo of the flowers.

"They sent me a photo of the flowers and there was a little note that said, 'Dear Jo, I miss you,'" said Megan.

Brett on the other hand, supposedly broke up with his girlfriend to go on the show.

"She was living with him and everything prior to the breakup. She found out through the grapevine that he was in Sydney filming MAFS. She messaged him to ask what the hell is going on," a source claimed.

Megan said she contacted a source close to Brett's on-screen wife Booka who confirmed the information.

According to the close source, the woman tried to get back with Brett after the show and she told him to "shove it". She also apparently got in touch with Booka after filming.

Brett allegedly made racist, sexists and homophobic comments to Booka behind the scenes.

Speaking of Brett, Booka's bridesmaid, Madlin, claimed that he was engaging in some "gross" and "disappointing behaviour" behind the scenes.

Speaking on the So Dramatic! podcast, Madlin alleged that Brett made racist, sexist and homophobic comments during filming that didn't make it to air.

"One thing that was particularly distressing and concerning was the sexist behaviour," Madlin told host Megan Pustetto, adding that Brett is more "covert about it".

According to Madlin, Booka told Brett "no, that’s not funny" after he made a sexist joke. But Brett was apparently "very offended" by her response.

"That's when the whole like 'you need to lighten up' type of thing started and that's when you see these comments coming out like 'you're too intense'."

Booka then reportedly tried to explain to him how his jokes contribute to rape culture, but Brett "wasn’t having it" and "did not want to listen to it".

Madlin also claimed that Brett wasn't interested in Booka at first because she "wasn’t Japanese".

She explained that Brett reportedly wrote a pros and cons list about Booka and under the things he didn’t like about her, he supposedly wrote "you're not Japanese".

"There is such an issue in society, especially western society where women, especially women of colour, are fetishised and it's not ok, it's not funny and that type of stuff just shouldn't be happening," said Madlin.

"We’re so quick to call out people like Bryce and of course, we should, but can we have a look at what else is going on?"

And that's not all. Brett also joked about "how him and Patrick are gay together because they just love eachother so much" and also gave himself a nickname called "butt boy Brett".

Apparently Bryce and Jake are close mates in real life and their feud was "producer-driven".

Throughout the season, there was some serious drama that went down between couples Bryce Ruthven and Melissa Rawson, and Beck Zemek and Jake Edwards.

It all started when Beck claimed Bryce told her that he wanted to send a gift to a girl on the outside. And it pretty much all went down hill from there.

But according to the Daily Mail, Bryce and Jake were apparently close friends on set and even hung out a number of times during filming breaks.

"They caught up for beers and still message each other," an unnamed source told the publication.

The source also claimed that their rivalry was only for the show.

"Their feud was all producer-driven for a television show. Beck and Jake were encouraged to stay in the experiment so there was another couple to challenge Bryce and Melissa."

Apparently there were some ‘major red flags’ about Jake that were edited out.

It seems there was more going down between Jake and Beck on MAFS that we didn't see on the show.

In March, Beck told The Kyle and Jackie O Show that there were some 'red flags' about Jake that didn't make it to air, including one pretty important "non-negotiable".

"Jake is great but there is one quality that is a non-negotiable in any relationship that keeps happening," she explained.

"It really just did come down to where my values are and I just really didn't enjoy or appreciate some of the things that were happening, resulting in confrontation with me."

Kyle then asked, "Are you saying there may be legal reasons why we aren't seeing this stuff?", to which Beck replied, "Potentially... I feel that."

Beck also explained the real reason why her mother was upset with Jake and called him out on his "destructive behaviour" during one of the episodes.

"That's a big red flag for me, I'm sorry. I'm hearing you're going out with the boys. Has that destructive behaviour continued?" her mother said during a video call with the couple and their families.

According to Beck, her mother had just watched "an unedited version" of the commitment ceremony that we didn't see on TV.

Jo has ‘exposed’ James’ controlling behaviour behind the scenes.

Joanne Todd and James Susler didn't exactly have the best relationship on MAFS. Which is why weren't surprised to see them leave early during the show.

In March, Jo spoke about James' controlling behavior in an interview with Who Magazine.

"He would always choose which restaurant we would go to, he didn't ask me where I would like to go, and if I said I'd like a steak, he'd try and suggest something else," she told the publication last week.

"If I said, 'this is the best place to go', he'd second guess me. He'd have to go and get a second opinion from the male concierge to see if I was right or not."

While Jo said her and James do "have good banter", being partnered up with him wasn't worth going on the show and leaving her three sons.

"At the back of your mind, you know it’s a reality TV show, but I really thought I could meet someone who would want to fit into my life and compromise on things. I don’t think he likes to be told by a woman. It wasn’t worth leaving my boys to be with someone like him."