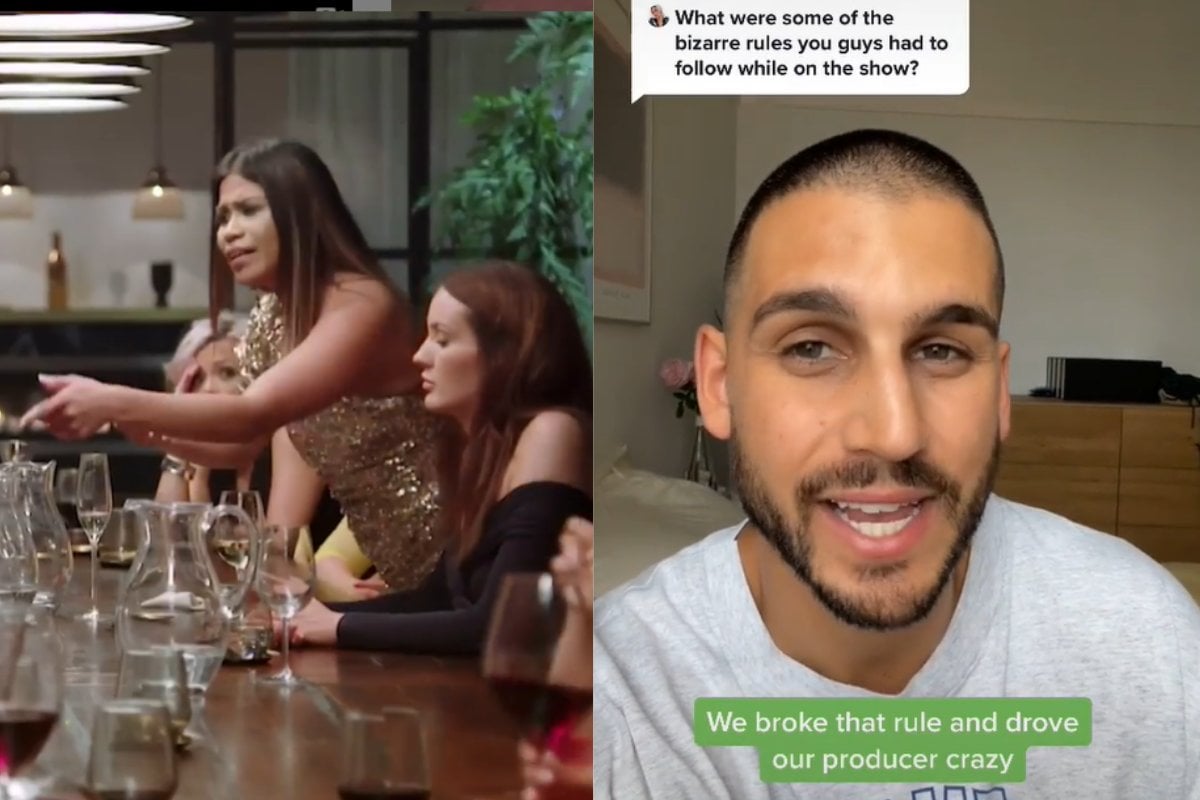 The dust has barely settled from the MAFS reunion but a new season of fake marriages is already coming our way.

Yep, season eight kicks off later this month and our lives will once again be consumed by drama, Instagram feuds, the throwing of beverages and the odd cheating scandal.

But behind the scenes, being a contestant on the show isn't just a simple walk down the aisle. In fact, the cast have to follow some pretty bizarre rules on set.

Watch the trailer for the upcoming season of Married At First Sight below. Post continues below.

So before the new season premieres, we decided to take a look behind the curtain at what filming is really like (just in case you needed another reason not to join the show).

Here's everything we know that goes on behind the scenes.

1. If you have a fight behind the scenes, you need to pause and call a producer to come film it.

According to Michael Brunelli, contestants are told not to talk to eachother when the cameras aren't rolling. And if they do have a fight, they need to alert the producers STAT.

"One of the weirdest things when we were on MAFS was that they didn’t film all day, so when the camera crew left [at night], they told us, ‘Don’t learn anything about each other, don’t really talk to each other because it needs to be on camera'," he explained in a TikTok video.

"If you have a fight, you need to stop mid-fight, call the producer so they can bring the camera and can start recording… then you’ve got to keep going with the fight!"

It's turns out the contestants' wedding day isn't exactly the magical fairytale we're shown on TV.

Dan Webb from season six previously told Mamamia that "you do your wedding three or four times, so they can get different angles".

"They don't have music [when the bride walks down], it's pretty quiet," he laughs. "I didn't really enjoy my day, it was very stressful."

Season five star Carly Bowyer also said that her wedding day "was the longest day of my life".

"I started filming at 6am and didn't go to bed until 4am, with a camera crew filming us as we got into bed," she told Mamamia.

"Then we were woken up at 5.30am... and then off on an overseas flight for the honeymoon."

3. The MAFS dinner parties finish at 3am.

MAFS dinner parties are... eventful, to say the least. So much so, that contestants don't actually finishing filming until the early hours of the morning.

"We start filming [getting ready for] the dinner parties at midday, arrive at 4pm and leave at three in the morning,"  Nasser Sultan previously told Mamamia.

As for the commitment ceremonies, Dan says they "go for about 12 hours, depending on how many couples are there".

4. The drama is very much real.

According to Michael the drama on the show is actually real. But producers are known for doing some pretty sneaky things to get a reaction.

"I know a lot of people think the drama on MAFS is fake. It's not," he explained in a TikTok video.

"The emotions are real, the issues are real but what the producers can do is that if they know you have a problem with someone [and] they know you're feeling a little bit emotional, they might put you at a dinner party sitting across from them, knowing that after a few hours something is going to brew."

"If you're dumb enough to take the bait on that, that's your fault not the procurers," he says, before adding, "we were all dumb enough at some point".

5. The contestants are given curfews.

Nasser previously told Mamamia that contestants are given curfews at night. During the week their curfew is 8pm and on Friday and Saturdays it's 10pm.

Dan also told us that contestants "can't do much".

"You can't go out with the other contestants. You're not allowed to speak to them off-camera. You live in the same hotel... but if you want to go to the gym in the building, you have to pick a time to make sure there is no one else at that time."

Carly Bowyer, from season five, even likened the experience to being on a school camp.

"We all went through many weeks of living in 'school camp', being told when to eat, when to go to the toilet, what to say, what to wear, what to think."