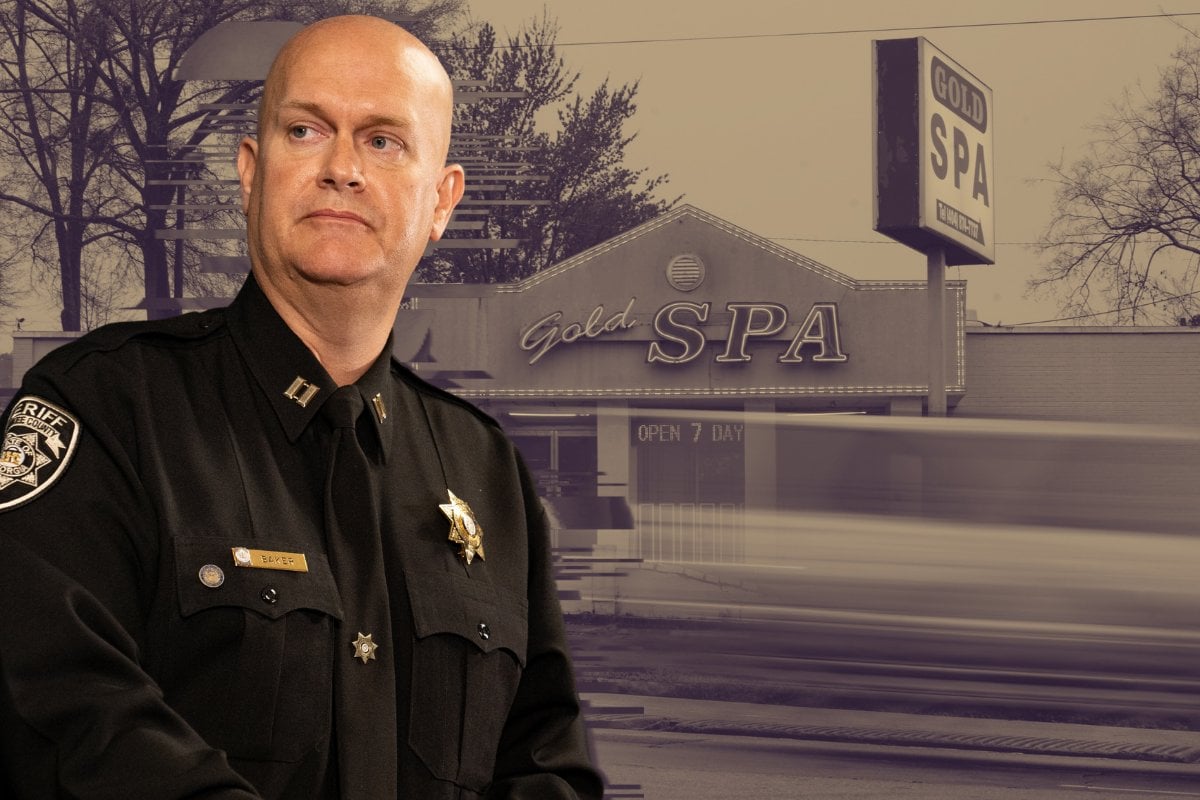 A lone gunman undertook a number of calculated, deadly attacks at massage parlours in Georgia on Tuesday evening, local time.

It comes after a year of increasing racism and hate crime towards Asian in the United States which has coincided with the coronavirus pandemic, but investigators are not yet willing to confirm whether it was a racially motivated attack.

Two people died at the scene and three were transported to a hospital where two of them also died, Baker said.

Around 5.50pm police in the Buckhead neighbourhood of Atlanta, about 43 kilometres away, responded to a robbery and found three women dead from apparent gunshot wounds at Gold Spa.

While they were at that scene, they learned of a call reporting shots fired at another spa across the street, Aromatherapy Spa, and found a woman who appeared to have been shot dead inside the business.

"It appears that they may be Asian," Atlanta Police Chief Rodney Bryant said.

South Korea's Foreign Ministry said in statement on Wednesday that its diplomats in Atlanta have confirmed from police that four of the victims who died were women of Korean descent.

The suspect, 21-year-old Robert Aaron Long, was captured about 240 kilometres from Atlanta, in south-west Georgia about two-and-a-half hours later. He told authorities he was heading south to Florida, to carry out further attacks. 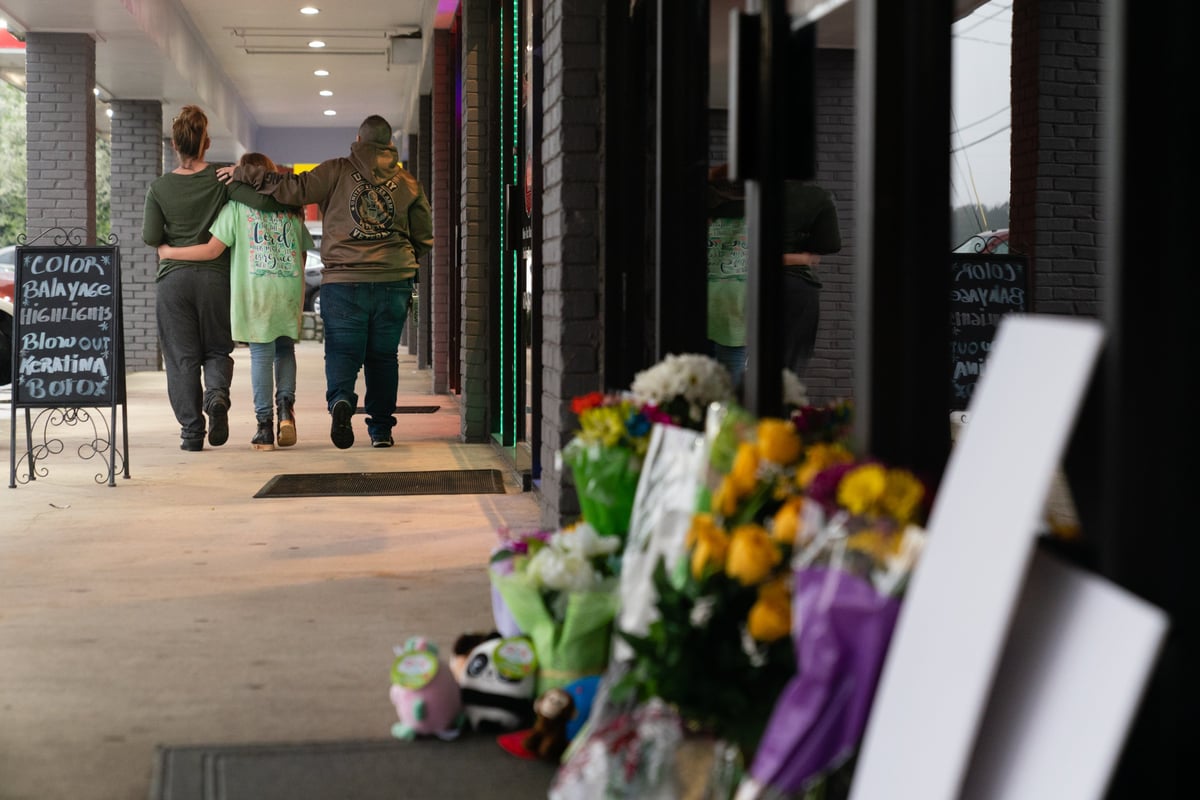 Police have not yet determined his motive, but have said the suspect had told them of a sex addiction and wanted to "eliminate" a "temptation".

Korean media outlet Chosun quoted someone who was in the Gold Spa at the time of the shooting as saying the gunman had yelled 'kill all Asians'.

Many have criticised the hesitancy to call the shootings racially motivated. A newly released report from activist organisation Stop AAPI Hate found there were at least 3795 reported hate incidents targeting Asian Americans from March 19, 2020 to February 28, 2021.

The words of police officers at a press conference about the shootings have also been labelled as callous and inappropriate ways to speak about a targeted mass murder that killed eight and left another injured.

"He apparently has an issue, what he considers a sex addiction, and sees these locations as something that allows him to go to these places and it's a temptation for him that he wanted to eliminate," Captain Baker said.

The idea that male sexual desire is torture women inflict on men is a key part of the incel movement. It demonises women and blames them for a man's lack of sex and/or control.

Baker described the suspect as "pretty much fed up and at the end of his rope", adding "yesterday was a really bad day for him, and this is what he did."

The refusal to name anti-Asianess, racism, white supremacy, misogyny, or class in this is whiteness doing what it always does around justifying its death-dealing. The centering of the suspect’s “rage” vs the vulnerability of the victims is also disgustingly familiar. https://t.co/G1tkEMRsBF

"It was a really bad day for him" is astonishing.

There are images circulating on social media that show a Jay Baker posting on Facebook about a t-shirt he owns, which looks like it features a corona beer logo, but instead reads: "COVID-19, imported virus from Chy-na". The post has been verified by Buzzfeed as belonging to the police captain.

Many are calling for his resignation.

Another officer, sheriff Frank Reynolds, said Long most likely frequented the spas and was "lashing out".

Killed were Xiaojie Yan, 49, Daoyou Feng, 44, Delaina Ashley Yaun, 33 and Paul Andre Michels, 54. It is believed the other four were those reported to the Korean Foreign Ministry.

Media outlets have already run stories about the suspect, with old acquittances describing him as "nerdy" and "religious". Much has been made of his upbringing close to the church, with a pastor for a father.

In contrast, focus on the victims has been scarce so far, with American media and law enforcement tiptoeing around the possibility of them being sex workers.

(Sex work is illegal in the United States, but it obviously still takes place; just without protections and the ability for workers to seek help without fear of persecution.)

'Sex' is a hate crime category under a new Georgia law, CNN reported. If the crime targeted women specifically, it could be classified as a hate crime, even if police decide it was not racially motivated.

Atlanta mayor Keisha Lance Bottoms said she'd seen no indication that the businesses were offering illegal services and she would not engage in "victim blaming".

She acknowledged the rise in crime against Asian Americans in a statement.

"Whatever the motivation was for this guy, we know that the majority of the victims were Asian.

"We also know that this is an issue that is happening across the country. It is unacceptable, it is hateful, and it has to stop."

Long legally purchased the gun used in the shootings at a local gun store, an attorney for the company told CNN.

Reply
Upvote
4 upvotes
It was just a joke. He was drunk, he didn't mean it.  It's just boys being boys. It's just locker room talk.  Hes been under a lot of pressure at work. He was upset. He was just having a bad day.
There's always an excuse. And women bear the brunt.
anonymous a month ago