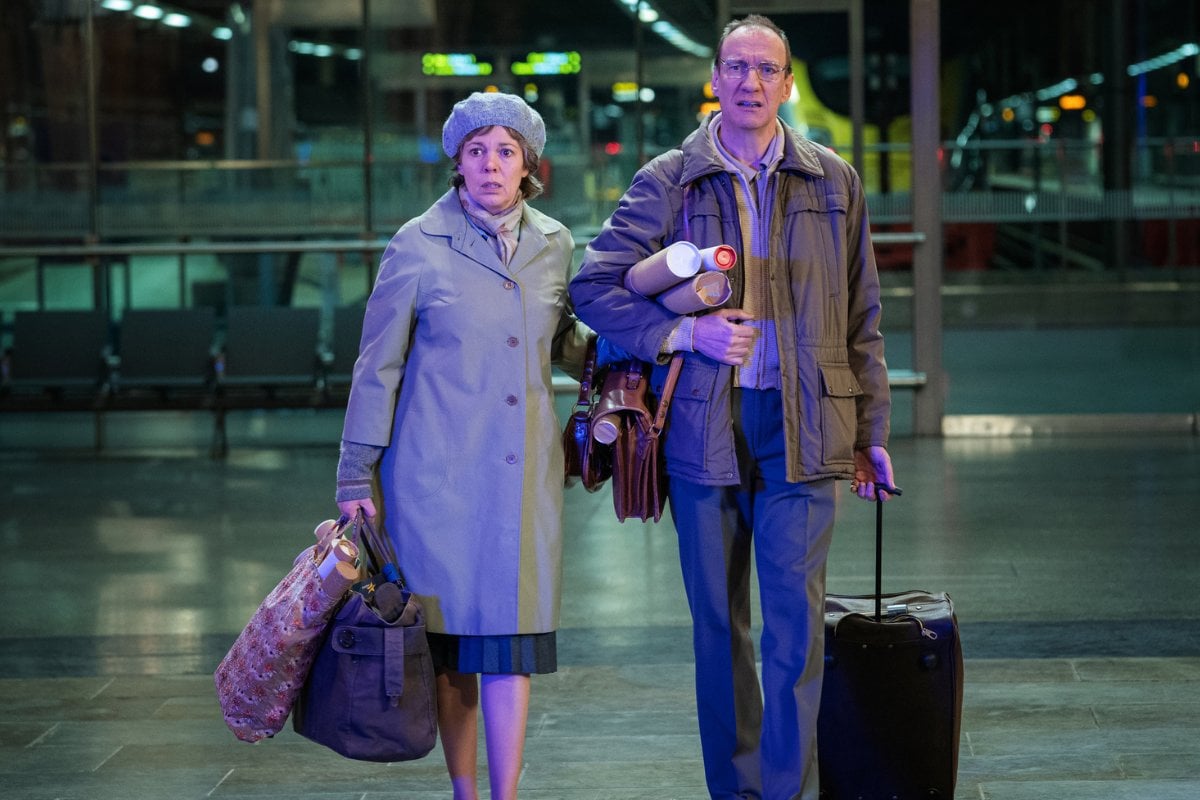 There are certain true crime stories that are guaranteed to capture our attention.

These are the kind of stories that surprise us, catch us off guard, and make us reevaluate what a victim and a perpetrator is supposed to look like.

These stories take everything we think we know about the world and how people behave, and flip all that on its head.

Watch the trailer for Stan's Landscapers. Post continues below.

The tale of British couple Susan and Christopher Edwards, and the bodies they buried in their suburban backyard, is one of those stories.

And their story has just been brought to life in Stan's darkly funny new mini-series, Landscapers.

Below I unpack what Landscapers is about and give my verdict on whether you should watch it:

What is Landscapers about?

Landscapers is a genre-bending series which could best be described as a true crime thriller meets a dark comedy.

The series tells the true story of Susan (Olivia Colman) and Christopher Edwards (David Thewlis), a librarian and an accountant from Dagenham, East London. The unassuming pair mostly kept to themselves, worked hard, and spent their downtime collecting Hollywood memorabilia.

Susan and Christopher seemed like your average middle-aged, middle-class couple right up until the day they murdered Susan's parents and buried them in the backyard.

After William and Patricia Wycherley disappeared in 1998, Susan told her parents' neighbours the couple had moved to Ireland to enjoy the fresh air in their twilight years.

No one thought much of it. And they definitely didn't suspect that the softly spoken Susan and Christopher were capable of murder.

For the next 15 years, Susan and Christopher hid their secret and lived on the lam. In 2013, when they were living in France and struggling to make ends meet, Christopher called his stepmother, asked for money, and confessed to killing his in-laws.

His stepmother alerted the authorities and thus begun one of the strangest true crime cases in UK history.

Landscapers follows Susan and Christopher as they return to the UK to confess to their crimes. It also follows the story of the police detectives tasked with interviewing the couple and uncovering the most unexpected case of their careers.

The mystery of why a married, middle-aged, middle-class couple buried a couple of bodies in their backyard.

Olivia Colman's brilliant, career-defining performance and the comedic timing of the dialogue.

Broadchurch for the... Olivia Colman.

Des for the gritty British true crime element. And Happy Valley for the dark comedy.

There are four episodes. The first episode is streaming on Stan now, with new episodes dropping weekly on Wednesdays.

If you love British crime thrillers and British comedies, you're going to love this series which combines the two.

Landscapers is less of a who-dunnit and more of a why-dunnit, and a look at how these two seemingly normal people could commit such a heinous crime.

It's funny, intriguing and a reflection of our cultural obsession with true crime stories.

I give it four and a half out of five... in-laws buried in the backyard.

The first episode of Landscapers is streaming on Stan now, with new episodes dropping weekly on Wednesdays.