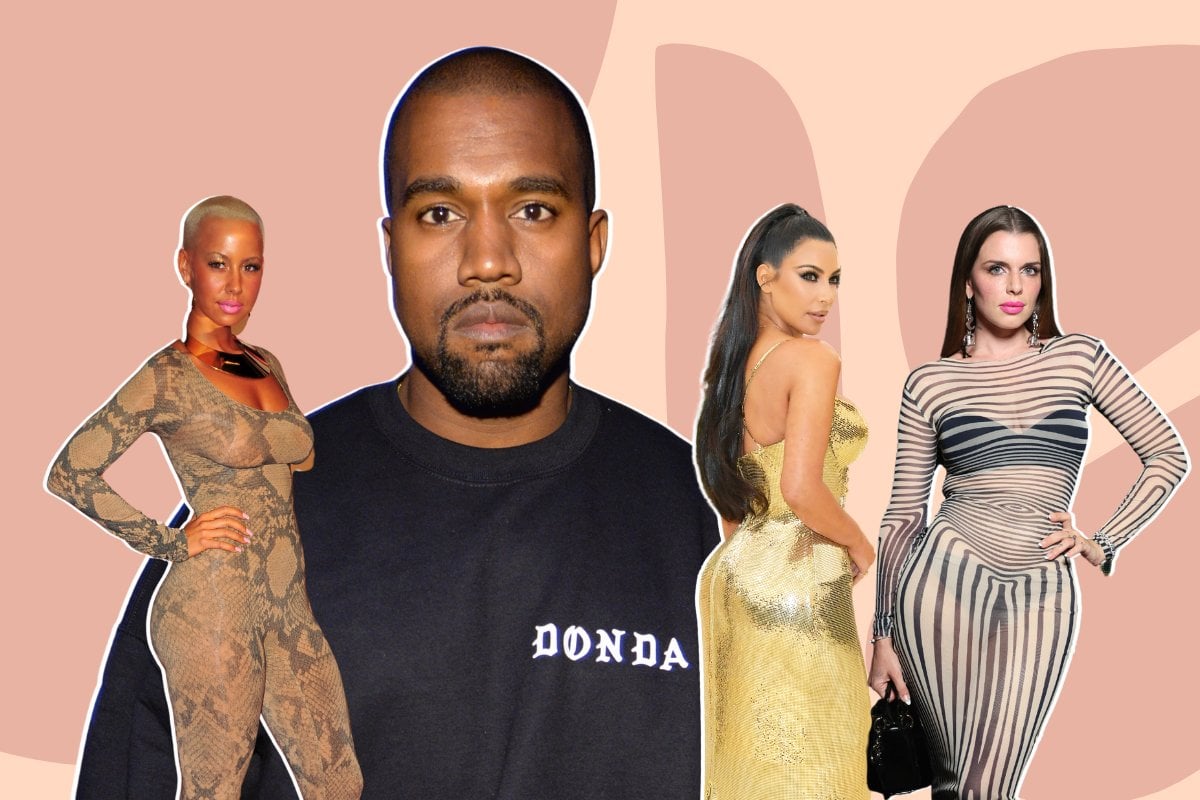 I'm convinced that no one has ever told Kanye West about the existence of Barbie.

Or Bratz. Or even Polly bloody Pocket.

This man doesn't seem to know about dolls. Somehow, he's gone through his 44 years of life without coming across these very well-known toys, which is a shame because I believe he would like them very much.

This must also mean Kanye West has never heard the legendary 1997 single by Danish pop group Aqua. The biggest travesty of all.

My hypothesis is such because if he had heard of dolls, surely he would channel his love for dress-ups towards those, instead of taking over the wardrobes of real-life women he likes the look of. Idk, it just seems like the easier option?

The thing is, Kanye (who now goes by just Ye, FYI, because of course) has a habit of treating his partners like living, breathing dolls. They're his fashion puppets, whose strings are pulled so they automatically shun large sunglasses and include Balenciaga in every outfit.

Ye's latest doll is Julia Fox, whom he has been very publicly dating since the New Year.

On the couple's second date, which Julia wrote about in an article for Interview, Ye gifted her an entire new wardrobe of clothing.

"After dinner Ye had a surprise for me. I mean, I'm still in shock. Ye had an entire hotel suite full of clothes," she continued. "It was every girl's dream come true. It felt like a real Cinderella moment."

Perhaps it is a fairytale, or perhaps, it's a man's attempt to mould her into what he sees as the perfect woman. A woman who, if she's going to be walking alongside him on trips to fancy-pants restaurants like Carbone, will match his desired 'aesthetic'.

Such a cynical read comes because Ye has form here. Taking over the fashion of the women he's dating is... a pattern.

Listen to Tamara Davis and Deni Todorović discuss Kanye's "fashion puppets" on What Are You Wearing? Post continues below audio.

In 2009, years before Kimye were the world's most famous portmanteau, Ye was dating Amber Rose.

In an Elle profile, her fashion of the time was described as being "from a far-flung dimension where women dress like superheroes", citing lots of catsuits and leather. Sound familiar?

In the piece, Amber said she was "not like his Barbie", but they had a collaborative approach to fashion. Oh, and she didn't always follow his advice.

"We're total opposites," she said. "I'm more electric pink and bright yellow. And Kanye's more like nude and bone. Like, bone is his favourite colour. I'm like, whose favourite colour is bone?"

In 2012, Ye began dating a new muse, and this one tolerated bone.

In an episode of Keeping Up With The Kardashians, Ye and his stylist absolutely ripped Kim Kardashian's wardrobe apart, throwing out pretty much everything - including more than 200 pairs of shoes. 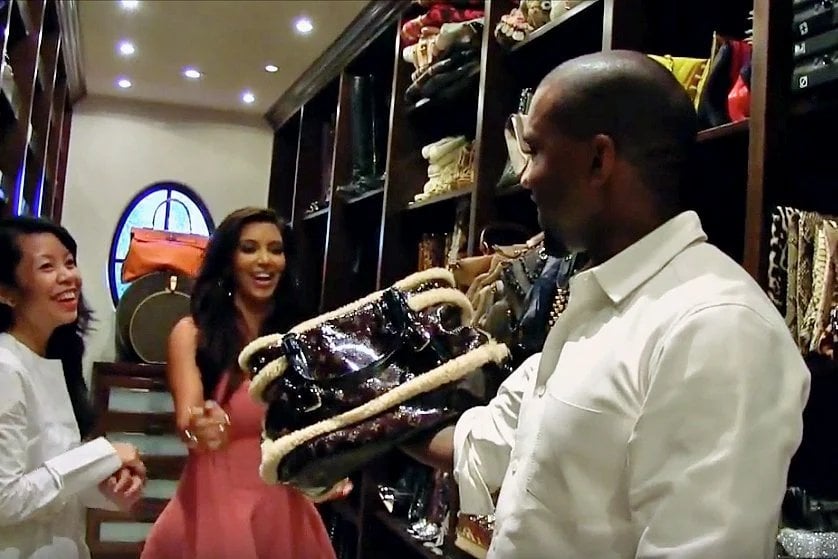 Kim had a visibly hard time with it, but ultimately she let him do whatever he wanted with her items. Ye replaced everything with a bunch of clothes that fit what we now envision Kim's style to be.

In the years since, both Kim and Ye have spoken about how he has inspired her style, including how he sends her mood boards of small sunglasses, dictating that "you cannot wear big glasses anymore".

During their relationship, Ye brought Kim into the innermost fashion circle. She met photographers and designers wanted to dress her. Everything she wore became a spectacle. She started her own fashion line, which, not-coincidentally, sells a lot in bone.

Put simply, she was transformed into a fashion icon. 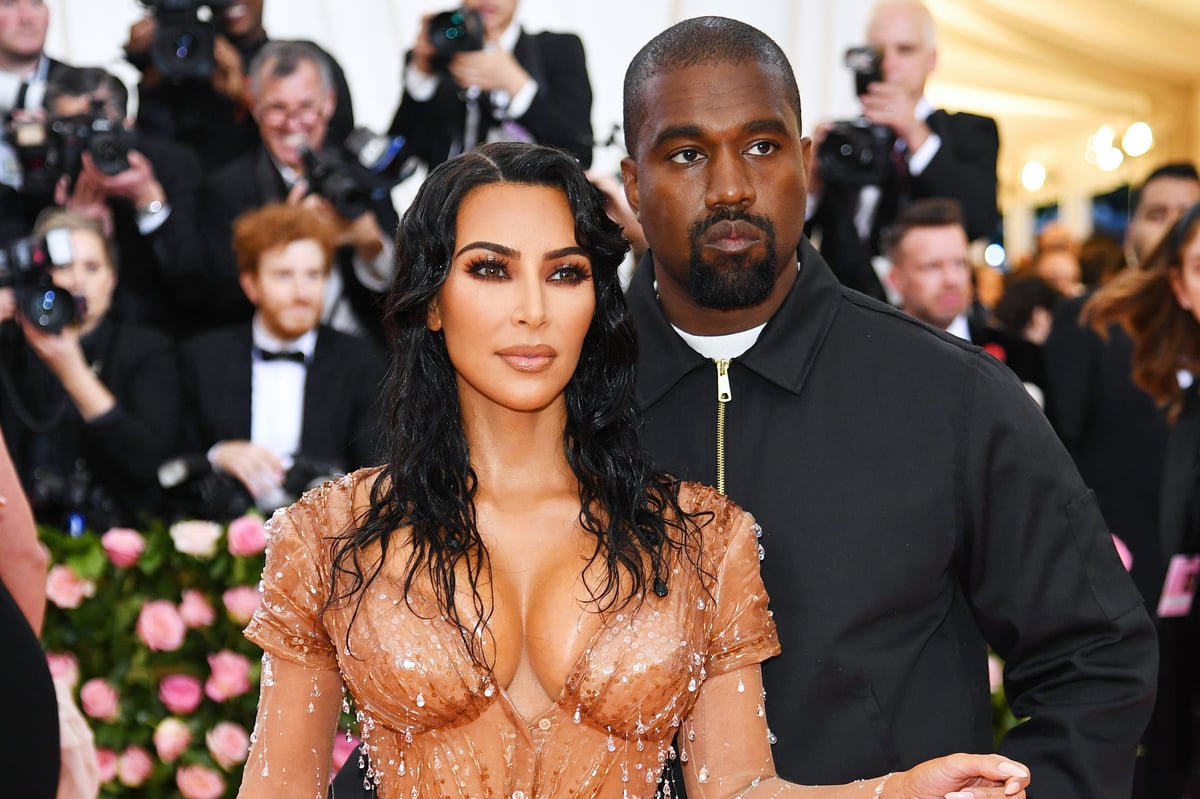 Following their breakup, Ye had a brief (and unconfirmed) fling with Irina Shayk. For the duration, the supermodel switched out her usual wardrobe for his brand Yeezy, and its collaboration with Balenciaga. Next he had an even shorter, even more unconfirmed 'thing' with model Vinetria, who wore head-to-toe Balenciaga on their one public outing.

Now we are watching it happen again with Julia, who appears to be very receptive to the changes.

In her Interview essay, she wrote that things between them were "so organic", which has raised eyebrows.

Stylist, activist and co-host of Mamamia fashion podcast What Are You Wearing? Deni Todorović discussed Ye's new muse on the show's January 20 episode.

"Now I would argue two things: one thing is, this to me felt like a PR stunt to promote Kanye's GAP and Balenciaga collaboration which was announced 24 hours after this photoshoot went live.

"The next thing I feel is, it almost feels like a bit of a commentary on Kanye getting back at Kim basically, for being so gleefully happy with Pete Davidson."

A post shared by What Are You Wearing? (@mamamia_style)

Since, Julia has been photographed with Ye a number of times, each in a very 'on brand' outfit, including Miaou low-rise whale-tail pants, black patent-leather boots, gloves and yes, Balenciaga.

In an Interview interview (I know, that's confusing) on January 15, Julia was asked about the "wildest thing he’s dreamed up that you've seen come to life between you two?".

"My transformation," she responded.

"After meeting him, a couple days later, all my shit was in boxes, gone. It was so cathartic. It wasn't like I was just packing up my old clothes, it was like I was packing up my old life. I was like making that very conscious decision to really put everything in the box. To let go of the past."

On What Are You Wearing? Deni said Kanye's eagerness to transform these women made them uncomfortable, which they believe is the point.

"Kanye is giving big narcissism, sort of gas lighter energy and I don't like that he's puppeteering these gals," they said.

They're probably right. But still... has anyone tried gifting Ye a Barbie?

Reply
Upvote
Kanye is Bipolar . Kanye please stay on your medication.  Let these women be who they want to be . U cannot dictate what they wear.  Nobody is telling you how to dress .  It's called freedom of choice Kanye
S
simple simon 4 months ago

Reply
Upvote
Ummm, not to play devil's advocate, but isn't it not uncommon for women to tell men in their lives what they can and can't wear?
M
mamamia-user-482898552 4 months ago

Reply
Upvote
1 upvotes
@simple simon If they do, it's probably because they're simply subbing in for where the man's mother left off.
B
bloggersmarketing 4 months ago