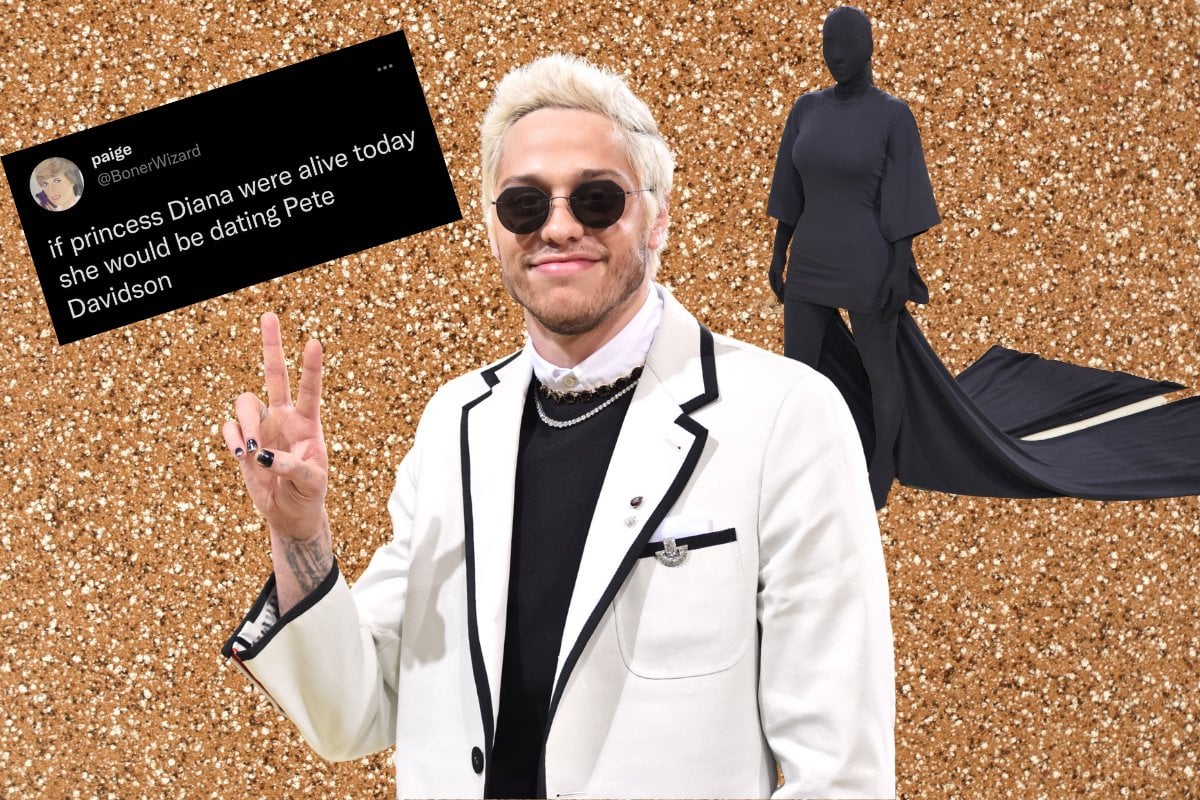 Over the past few years many have tried to solve the puzzle that is Pete Davidson.

People are either deeply attracted to the Saturday Night Live comedian or they don't understand what all the fuss is about.

Davidson is an incredibly tall fella. He's covered in the kind of tattoos one might collect over a long prison stint. His hair is sometimes dyed the yellow blonde made famous by boy bands in the late 90s.

He often looks like he needs a good wash. He gives off an aura that says he hasn't done his taxes for the past six years. His car is in desperate need of a service. And he's never once opened his mail.

Watch: The celebrity couples we forgot about. Post continues after video.

And he gives very few sh*ts about any of this.

He moves around this world with the kind of effortless confidence many of us mere mortals could never imagine achieving.

In his stand-up routines, he riffs off his own appearance, his failures and f*ck ups. And then shrugs it all off.

He's bloody funny, and he has a disarming smile. And he never takes himself too seriously.

All of this makes him damn attractive to a large portion of the general population. Including this writer.

But the allure of Pete Davidson goes even further than that. Pete seems to attract the attention of some of the most conventionally attractive, ridiculously successful women in Hollywood.

He first came onto most people's radar in 2018 when he began dating pop star Ariana Grande. Their little love affair burnt bright and fast, and ultimately fizzled out after a couple of months and a quicky engagement.

In 2020, he dated Kate Beckinsale. A woman two decades his senior, who had just ended her 15-year marriage.

Then, over the weekend, he was photographed holding hands with Kim Kardashian on a rollercoaster.

The photos quickly went viral around the world. Then the memes started. And the TikToks.

People's reactions seemed to fall into one of two camps:

1. Of course, Pete Davidson is dating Kim Kardashian, and

2. WHAT THE HELL DOES THIS LANKY DUDE HAVE?

Later in the week, Kim K apparently travelled to Staten Island to have dinner with the SNL star at a local pizzeria. (I think we can all agree that she didn't take the... ferry.)

Davidson and Kim K's relationship on the surface may seem unexpected. A mismatch. But it actually makes a lot of sense.

Pete Davidson is EXACTLY the kind of man Princess Diana needed to date after her very public divorce.

He would have made her laugh. They would have had SO MUCH FUN. And it would have confused the hell out of the paparazzi who were stalking her every move.

Over the past few years, Davidson has become Hollywood's resident rebound, rebrand and relaunch guy.

He's a soft spot for women to land when they surface from a long-term relationship, a messy, public breakup, or a traumatic event.

The comedian offers famous women a respite from dating more serious "Hollywood" guys. He's funny. And fun. And hot. He goes with the flow. He'll even get engaged after a couple of months if the mood takes you there.

She was raw and vulnerable, and I'm assuming Davidson offered a reprieve from that. Together they crafted a tabloid fairytale romance, packed with matching tattoos and heavy PDA.

Soon, Grande's name was no longer primarily associated with the Manchester bombings. The headlines were now all about her and Davidson.

And after they broke up, and she released her next album, she had plenty of Davidson material to create catchy pop songs about sh*tty exes and what they teach you.

Kate Beckinsale was married to her film director husband for 15 years. The entire dating scene had changed when she re-surfaced in her late 40s.

Davidson was the perfect relaunch boyfriend for her. A palette cleanser before she took on more serious relationships.

Kim Kardashian has just ended one of the biggest celebrity unions in the world. Her and Kanye's brands were intertwined for years. And for a long time, she's quietly weathered the storm of Kanye's public controversies.

By holding hands with Davidson on a rollercoaster and sharing a slice on Staten Island, Kardashian has very cleverly let the world know that she's fine.

Honestly, Kris Jenner is probably rubbing her hands together with glee. It's a brilliant PR move.

Listen: Kim Kardashian, Pete Davidson and a leaked story about a hotel room. Post continues below.

Who knows how the Davidson and Kim K dalliance will play out. Maybe they're just good friends. Perhaps they'll date for the next few weeks. Maybe he will become step dad to Kim's brood of terrifyingly fashionable and profitable children.

But I have a feeling that in a few months we'll be talking about Pete Davidson and another ridiculously famous woman.

Keryn Donnelly is Mamamia's Pop Culture Editor. For more of her TV, film and book recommendations and to see photos of her dog, follow her on Instagram and   TikTok.

Reply
Upvote
Princess Diana has been dead for 30 years, perhaps it's time to leave her romantic life alone.
S
simple simon 8 months ago

Reply
Upvote
@simple simon do you think that makes a substantive difference to my argument or are you just nitpicking?
S
simple simon 8 months ago

2. WHAT THE HELL DOES THIS LANKY DUDE HAVE?

Word has it, an enormous dong.
S
simple simon 8 months ago