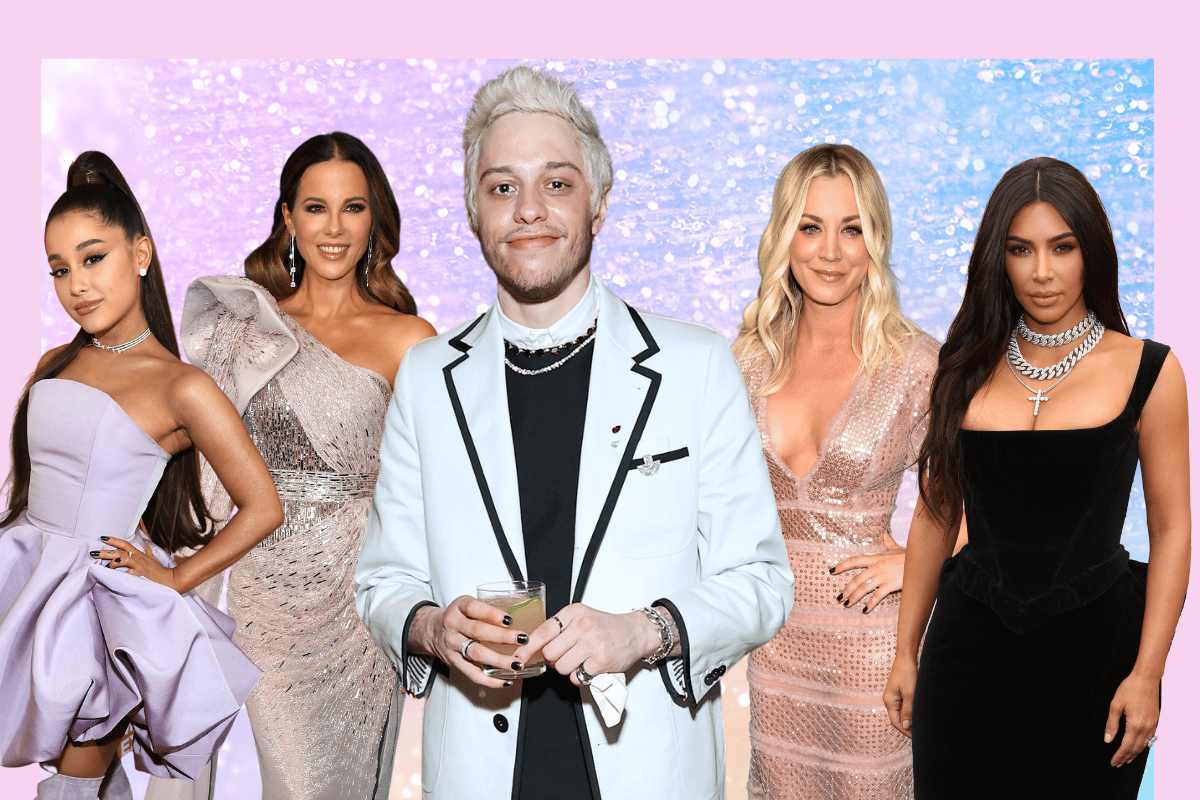 The pairing that precisely no one saw coming: Kim Kardashian and Pete Davidson??

Yep. Kim K was seen with Davidson this weekend, holding hands on a rollercoaster at a Californian theme park. They were joined for the outing by Kim’s sister, Kourtney Kardashian, and her fiancé Travis Barker.

“They hang in the same circles so they will be together from time to time,” an insider told People Magazine. “It’s just friends hanging out.”

It’s an interesting meeting, considering the fact the Kardashian mogul and Davidson shared a kiss during a sketch on Saturday Night Live as part of her hosting debut.

Even though it’s likely the pair are just close mates, we thought it was perfect timing to take a look back at Pete Davidson’s relationships with some of the world's most famous women: 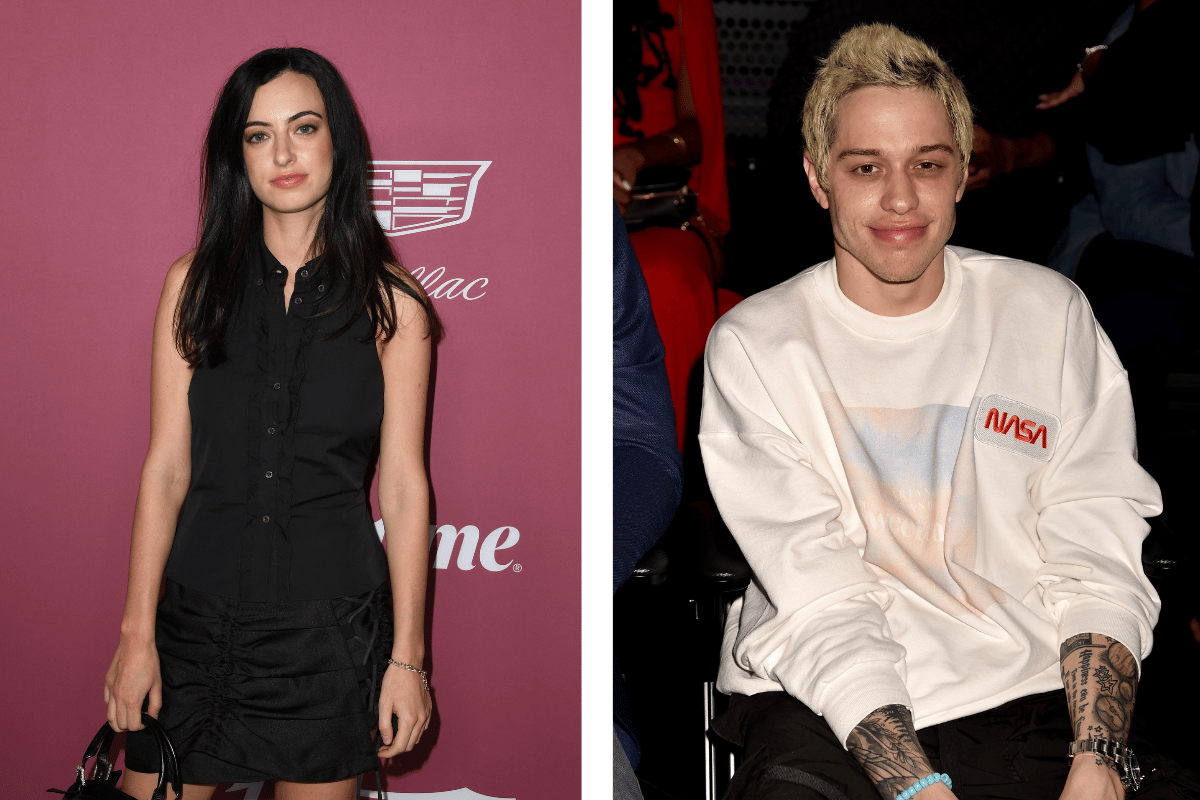 The couple began dating in 2016, and were photographed at numerous public events together.

In 2018, Davidson confirmed to Complex the pair had split. “We’re not together anymore. Very talented girl, she’ll be great and she’ll be fine. Yeah, I think she’ll be ok.” Turns out his ex-girlfriend was not ok.

Only days later, Davidson began dating Ariana Grande, to the shock of his ex.

At the end of last year, David published a range of personal essays in her collection titled ‘No One Asked for This.’ 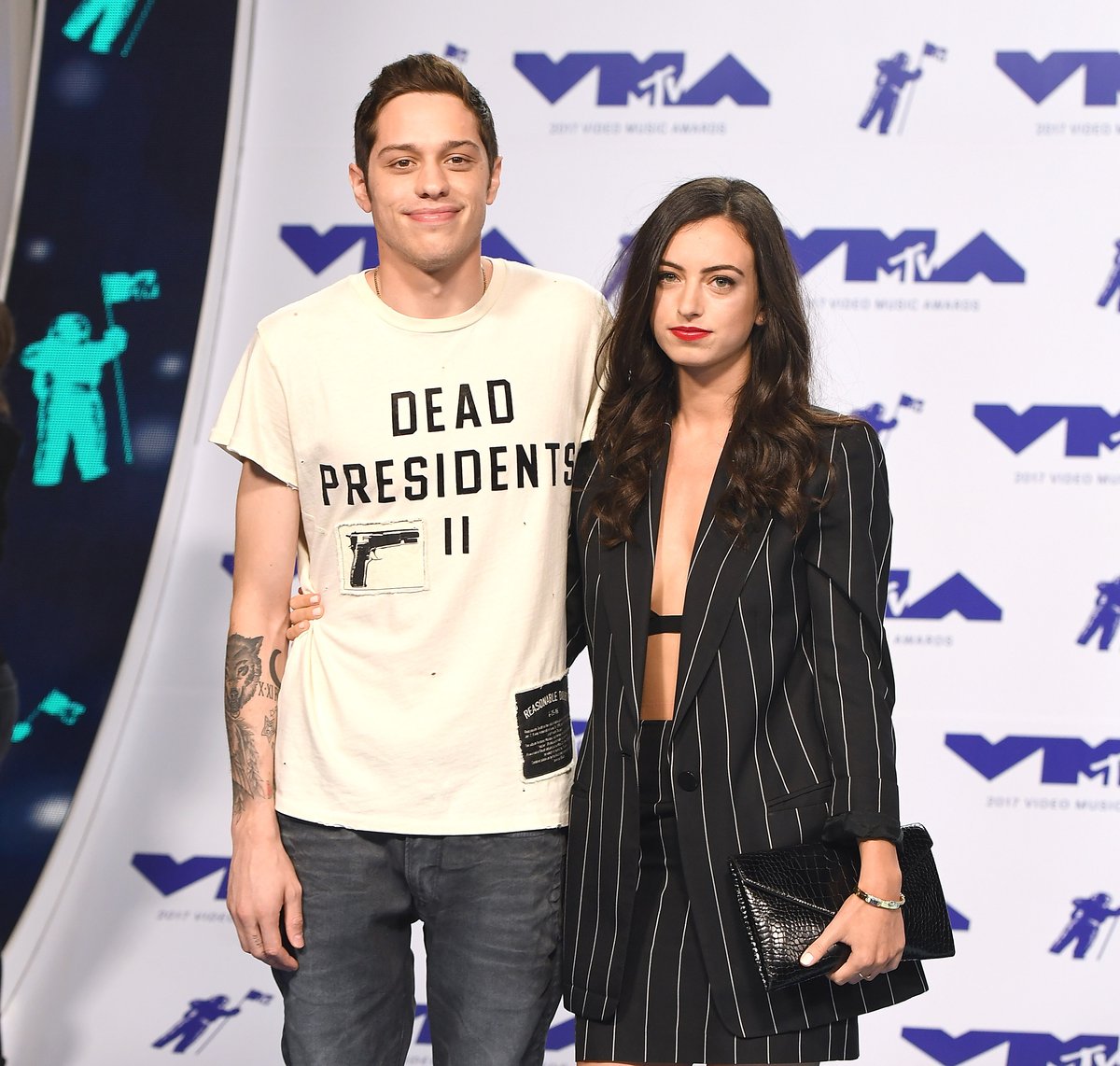 “I scrolled through Twitter and saw that my ex of one day had a new girlfriend,” she shared. “I think I probably left my human body. My dad held me as I shook uncontrollably in his arms.”

“The first thing I saw was a picture he'd uploaded of himself with his hand covering his face to show off his new finger tattoos,” she wrote. “My name, which had been written in cursive across his ring finger, was now covered over with black ink.” 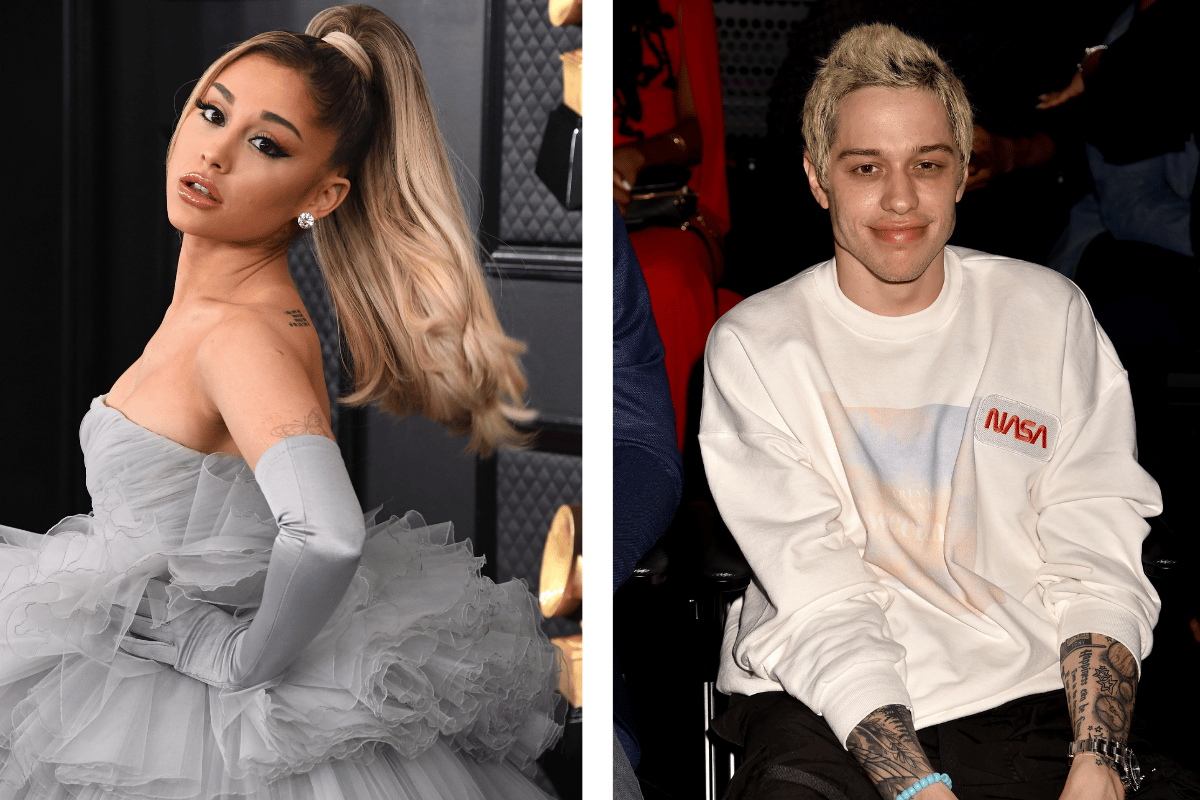 Now onto the whirlwind romance that is Grande and Davidson!

In just five short months, the couple had tattoos inked to pay tribute to each other, bought a $16 million (or thereabouts) house together and became parents to an adorable baby pig named Piggy Smalls.

After dating for just a few weeks, Davidson and Grande got engaged. 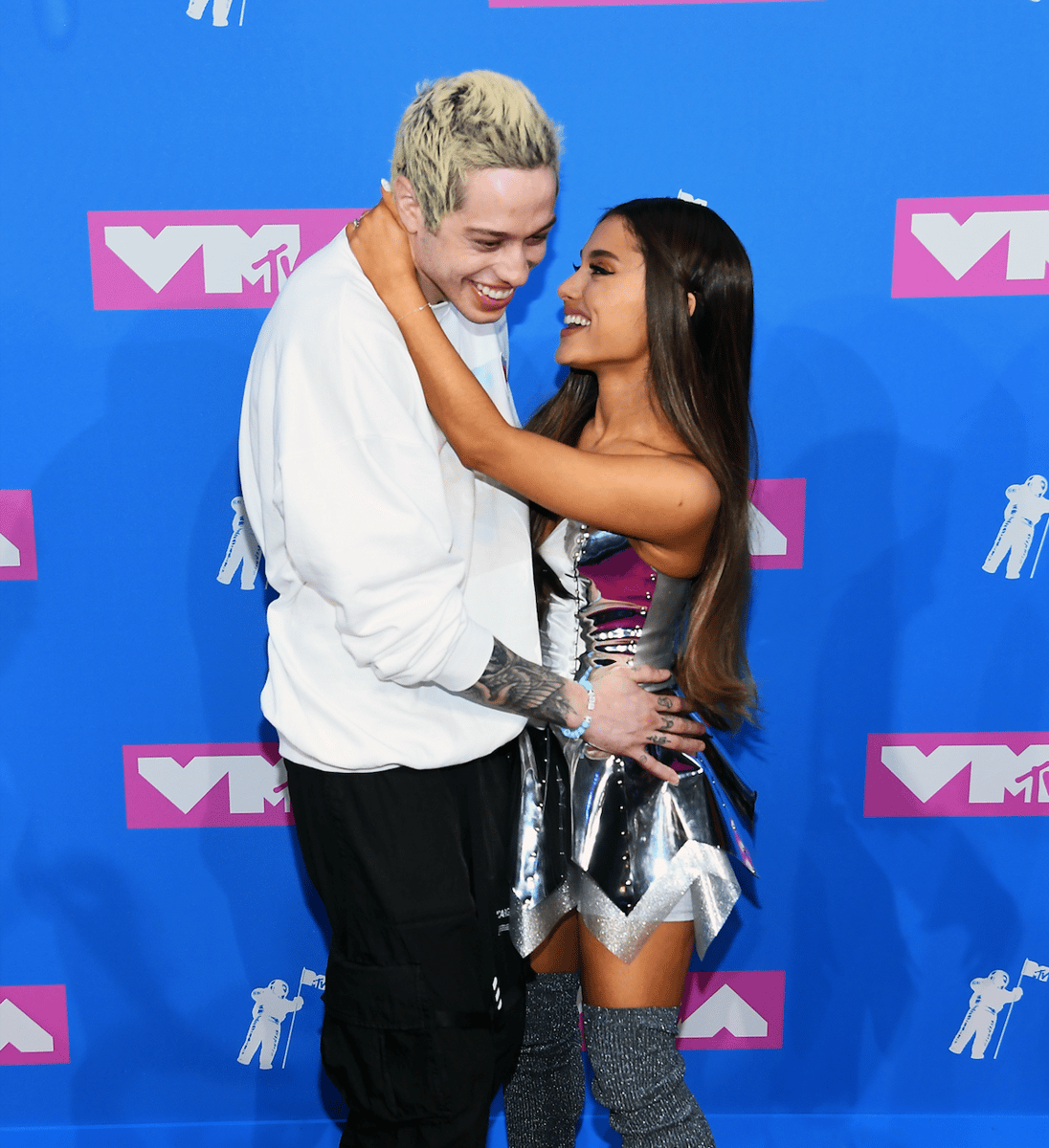 But sadly it wasn’t meant to last, with the pair splitting in October 2018.

In 2019, Ariana told Vogue: “I met Pete, and it was an amazing distraction. It was frivolous and fun and insane and highly unrealistic, and I loved him, and I didn’t know him.” 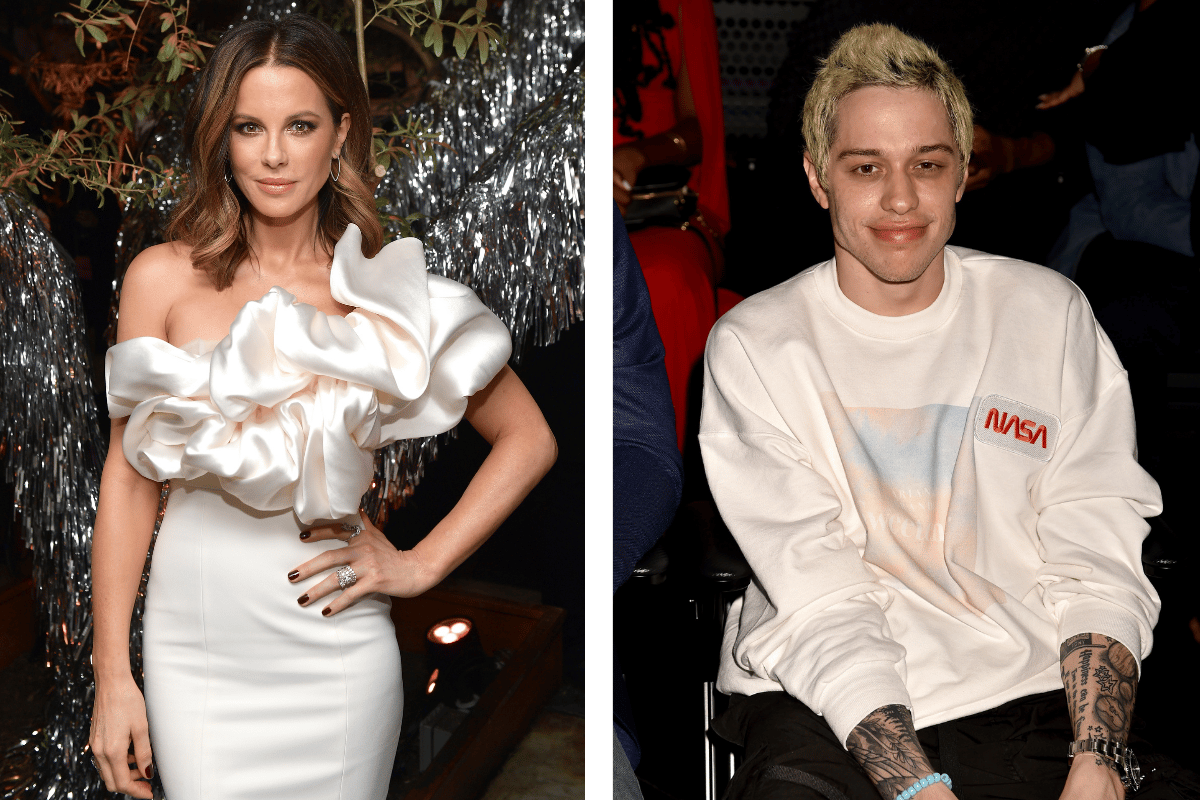 According to People, the comedian and the actress were seen flirting at a Netflix after-party for the Golden Globes in early 2019, despite both arriving with friends/wing-people.

A source for the publication claims they talked “intently” for most of the event before being joined by Davidson's friend Machine Gun Kelly, as well as Isla Fisher and Sacha Baron Cohen.

At the time, Harper's Bazaar reported Davidson and Beckinsale were again seen together leaving a LA club where Davidson was performing. But their 'relationship' wasn't confirmed until an ice hockey game in New York in March 2019.

The duo had a 20-year age gap, with Beckinsale’s daughter, Lily Sheen, being three years younger than Davidson. 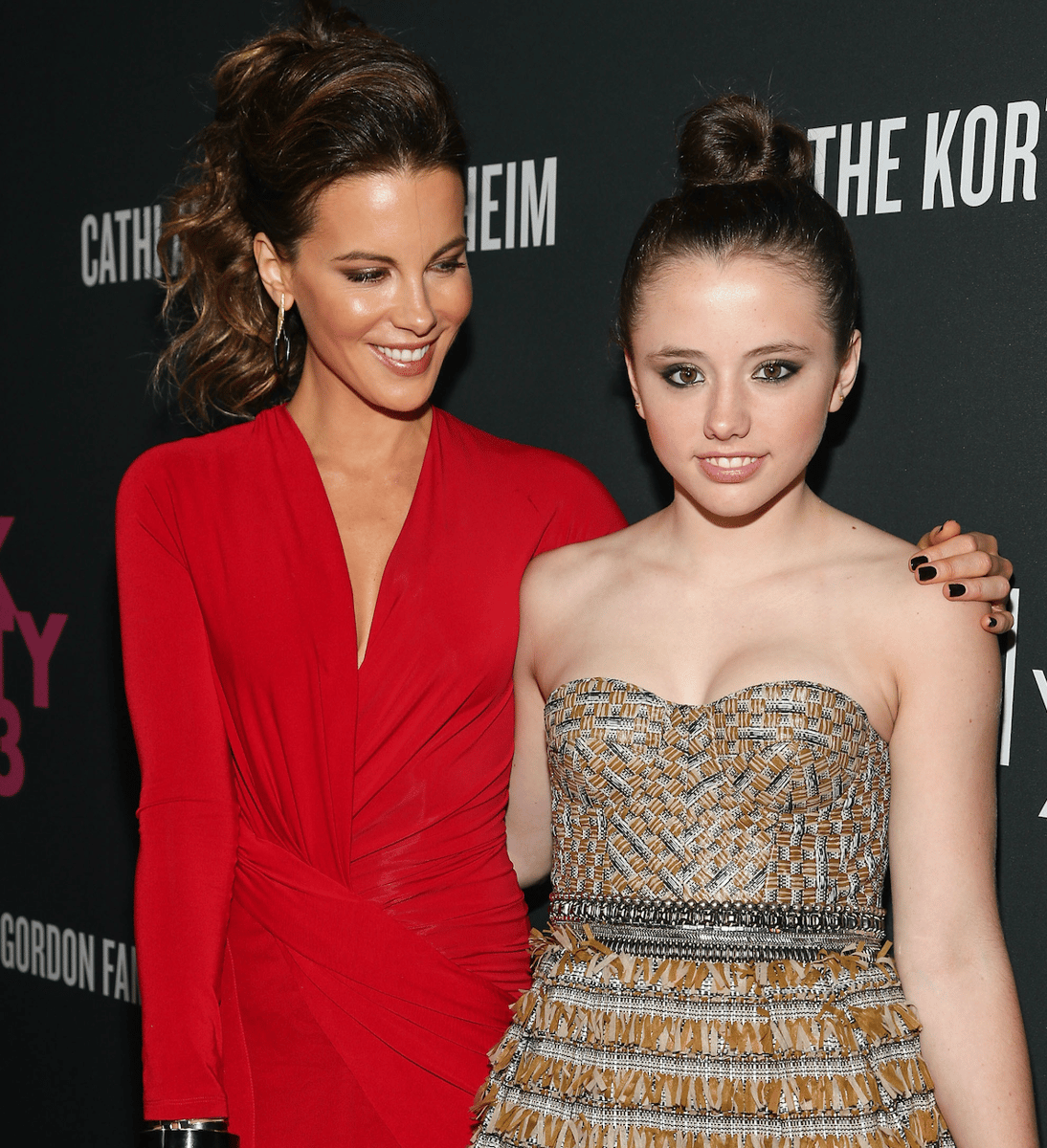 But according to Page Six, it wasn’t the age difference that caused concern for the pair, it was Davidson’s public lifestyle.

“Even though Kate has been in Hollywood for a long time, she struggled with the attention on her relationship with Pete. He lives his life with his heart on his sleeve.” 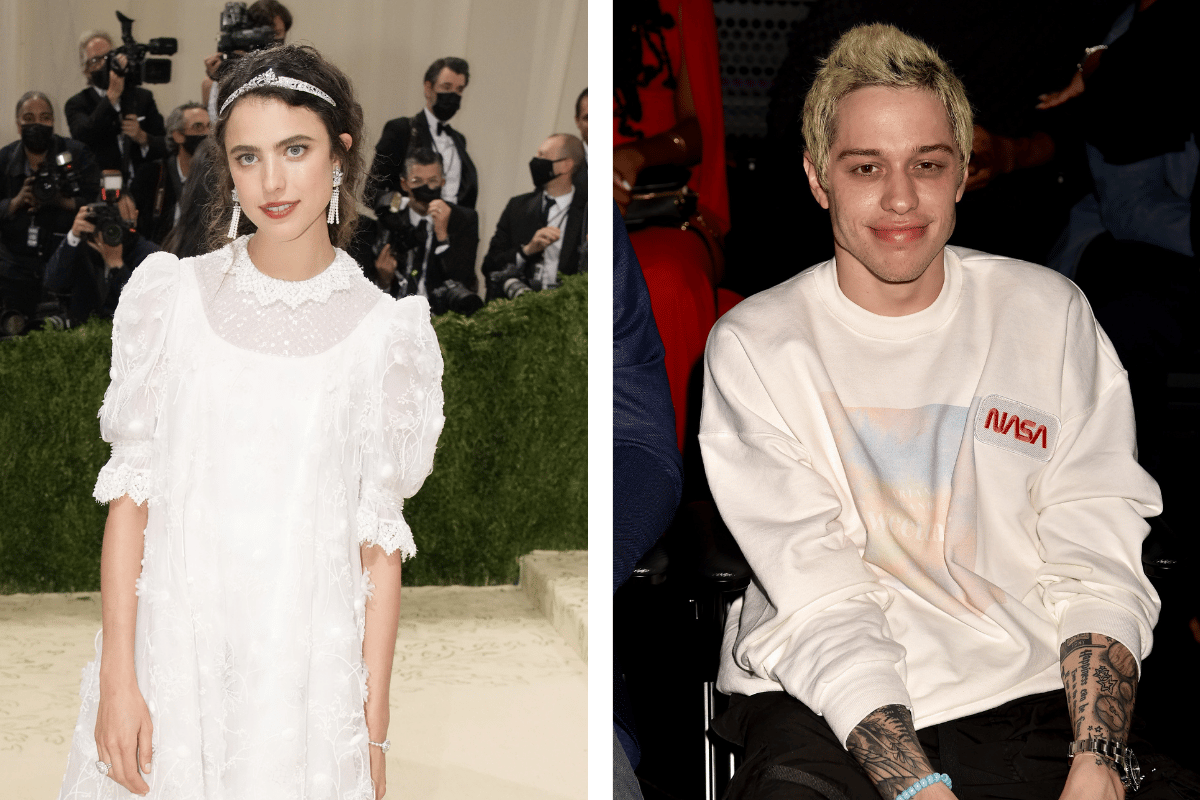 Image: Getty. Once Upon a Time in Hollywood and Maid actress Margaret Qualley was once linked to Davidson.

Davidson and Qualley were first seen together in Venice in August 2019 at the premiere of her film, Seberg.

Speaking on her daughter’s relationship at the time, actress Andie MacDowell said: “She has a beautiful relationship with him but I don't want to step on her relationship too much.”

“I FaceTimed with Pete the other day or no, she took a video of me to send to Pete, that's what it was,” she said to People Magazine.

It was a brief relationship, with the couple only dating for a few months. 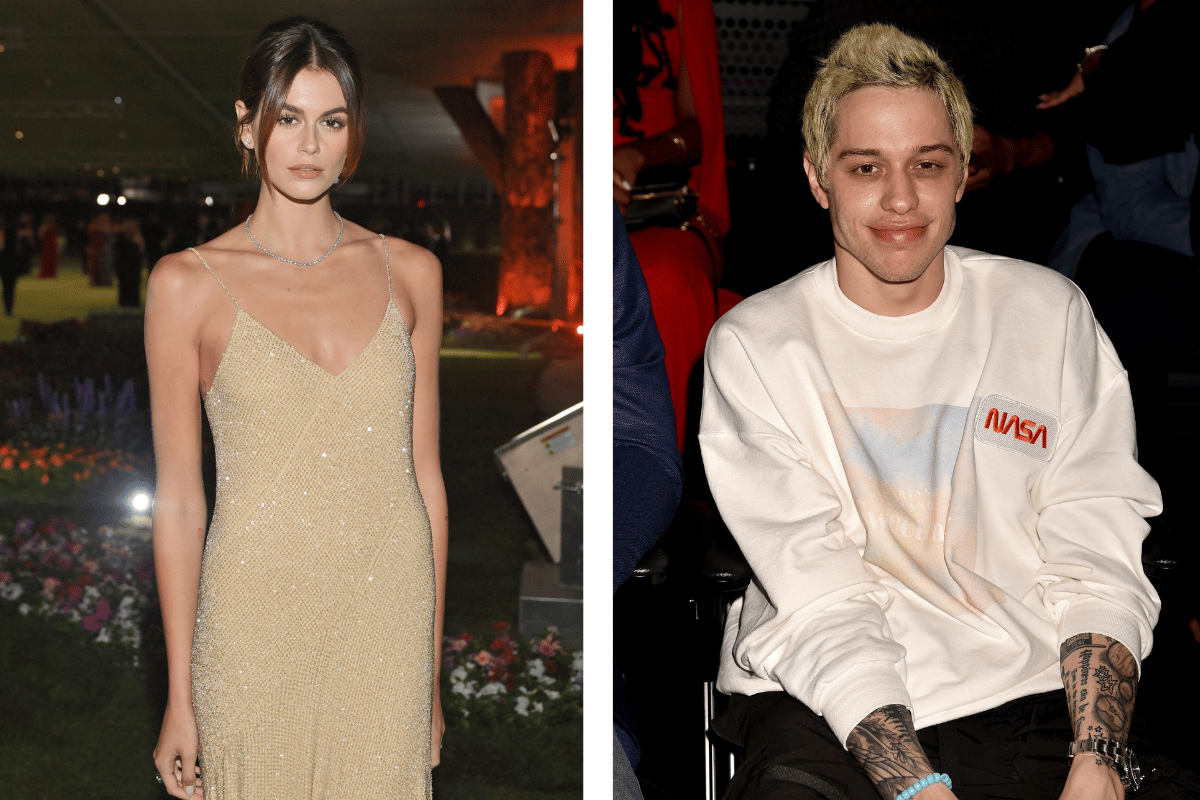 Davidson noted the relationship wasn’t at the right time for him, due to his mental health.

In an interview on YouTube with Charlamagne Tha God, Davidson said: “She’s very young, and I’m f**king going through a lot and it was before I went to rehab.”

“It’s just like, she should be having fun. She shouldn’t have to worry about some dude that just has issues and s**t. She should be enjoying her work.”

He added: “It just wasn’t the right place or the right time at all.” 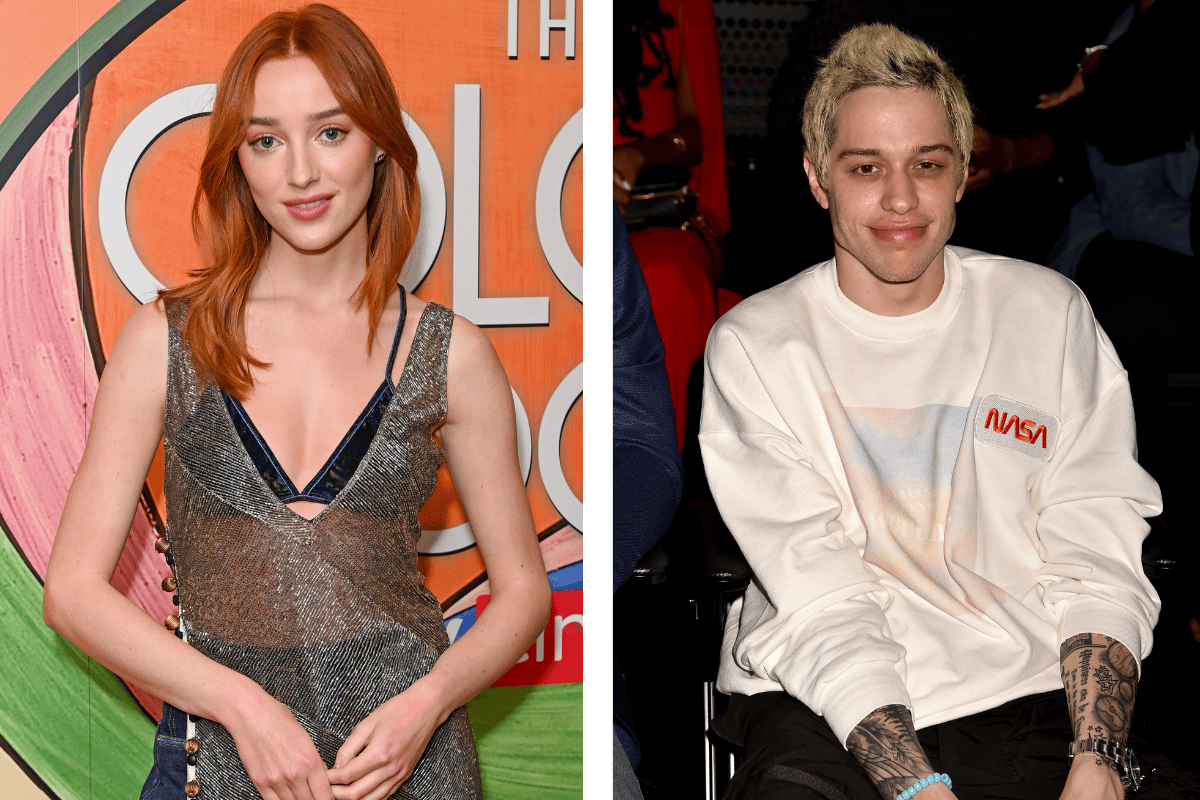 Bridgerton star Phoebe Dynevor and Davidson were quite the item earlier this year.

Rumours began around March 2021, with Davidson confirming the relationship in April.

The Sun reported that Dynevor apparently invited Davidson to stay with her in the UK.

“Pete is a real charmer and has hit it off with Phoebe, who is obviously beautiful and talented. They have been enjoying each other’s company, although they haven’t known each other long,” an anonymous source supposedly told the publication.

When someone asked the comedian who his celebrity crush was during a Zoom call with Marquette University students in mid-April, he responded: “I’m with my celebrity crush.”

He added, “That is all I can speak on.” And you bet we are going to presume his celebrity crush at the time was none other than Dynevor herself.

The couple then split in August 2021, after five months of dating. 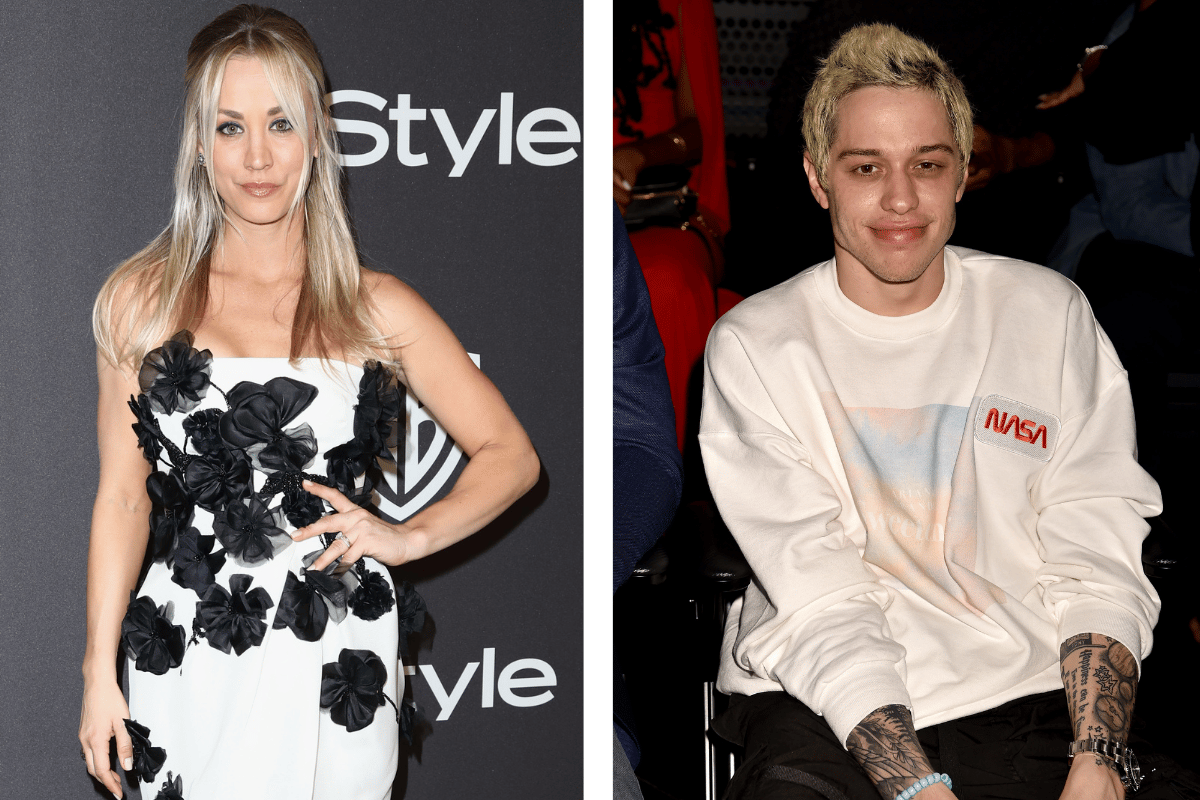 After almost five years together, Kaley Cuoco and her husband Karl Cook announced their split in September 2021.

Following the breakup news, Instagram gossip account @DeuxMoi were alleging the reason behind the split could have been due to the one and only Davidson.

The pair were spotted together quite a lot in the wake of Cuoco’s split. However, they were working on a rom-com film together at the time.

Listen to Mamamia's entertainment podcast The Spill: on this episode we discuss why Kaley Cuoco had to date Pete Davidson. Post continues after audio.

The Sun reported that Cuoco and Davidson had become very close while working together.

“Pete and Kaley have got on incredibly well since day one but as the weeks have passed, it’s become clear there is some attraction there,” the insider alleged.

“When the cameras stopped rolling, they’d be cracking jokes and were clearly enjoying one another’s company.”

“The chemistry between them is so palpable, it’s all people could talk about on set.”

So, whether the rumours are just a PR push for the film or if there’s some truth there: we will have to wait and see.

Reply
Upvote
1 upvotes
Did anyone else read this article and still find themselves asking who Pete Davidson actually is? Is he just famous for dating people or does he... do something?

Reply
Upvote
3 upvotes
@cat he's a comedian and actor, he's been on Saturday Night Live for a few years now.