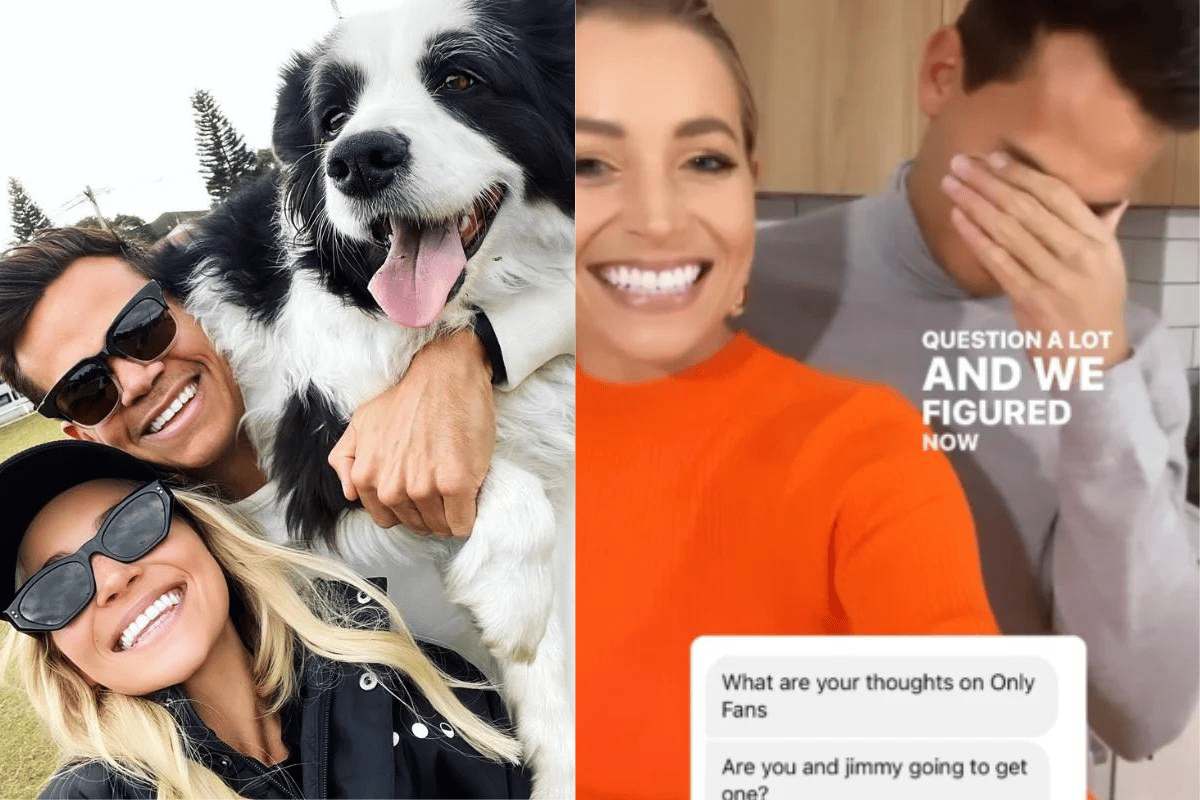 Jimmy Nicholson and Holly Kingston began their relationship on The Bachelor's 2021 season.

Those who watched the season – although the numbers weren't great – saw the pair fall in love on screen, and they've continued with their relationship since.

They've gone on to become influencers in their own right: coordinating sponsorship deals and doing branded posts. And they've also created a YouTube travel series called '100 Honeymoons', where they've essentially been paid to promote and advertise beautiful holiday destinations across Australia and the globe.

So why was everyone talking about Jimmy and Holly last week, you may ask?

Well, it has everything to do with a recent Instagram video of Holly's where she answered two follower questions: "What are your thoughts on OnlyFans?" and "Are you and Jimmy going to get one [OnlyFans account]?"

Jimmy and Holly on The Bachelor finale. Post continues below.

Their response has been met with a decent amount of criticism.

Here's what we know about it all.

"We're about to run out the door but we get this question a lot and we figured now is a good time to just answer it once and for all," Holly began the video with her and Jimmy.

"No judgement to anyone who does have OnlyFans, but I think there's been a little bit of a trend in people coming off reality shows and leveraging that degree of fame to then sell nudes online."

Jimmy then said: "My problem with it is people saying they're doing it because it's female empowerment or male empowerment, I think that's a load of s**t personally."

He then went on to say that if people wish to celebrate empowerment, they should instead try and be "role models to future generations" –  suggesting OnlyFans creators and sex workers can't be role models as well.

He then suggested that perhaps people coming off reality TV shows should "start a charity" rather than "leverage" their fame by selling naked photos or anything of that nature. 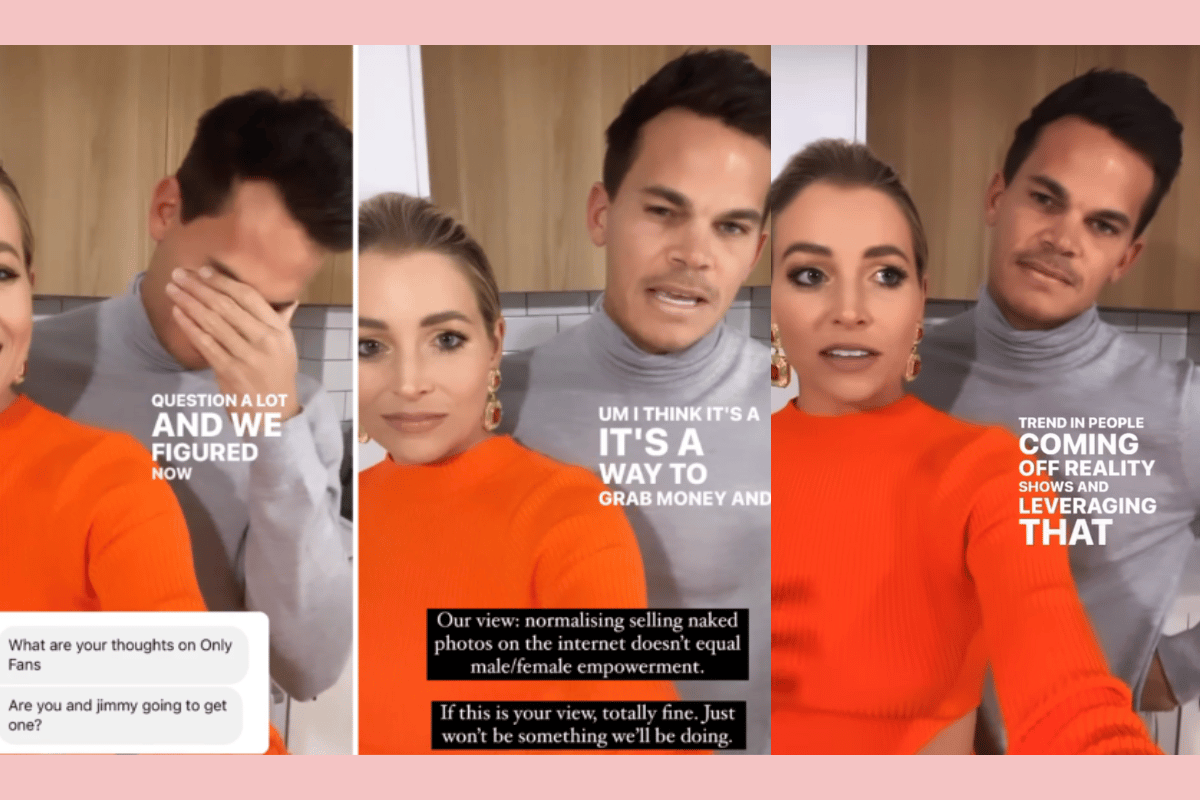 As you can imagine, a lot of commentary followed.

Some agreed with the couple's opinion, but for the most part, the response seems to be one of criticism.

Reality TV star turned business owner/podcaster/radio host and TV presenter Abbie Chatfield shared her thoughts on the situation, saying she was disappointed with Jimmy and Holly as she considered them mates.

Referring to their Instagram story as "sex work shaming", she noted that she DM'ed Holly within "seven minutes of it being uploaded" explaining what she felt was wrong with it.

Listen to The Spill discuss this news. Post continues after audio.

She hoped an apology would be made, but at the time of Abbie going to her own Instagram stories (several hours later), nothing had been addressed by the pair.

"It's extremely disappointing and made me extremely uncomfortable. The tone of voice of 'no judgement but here's our judgement' is obviously not ideal," she said.

"No one actually asked you guys what you thought the morality of OnlyFans and sex work was. They just asked if you would do it. This kind of felt like a vessel to speak about your dismissal of people who do OnlyFans."

As Abbie wrote in her message to the couple, she thought their views were "extremely slut shamey and the opposite of progression".

She noted: "Having nudes doesn't make you any less or any more of a role model. Sex work is real work and should be respected." 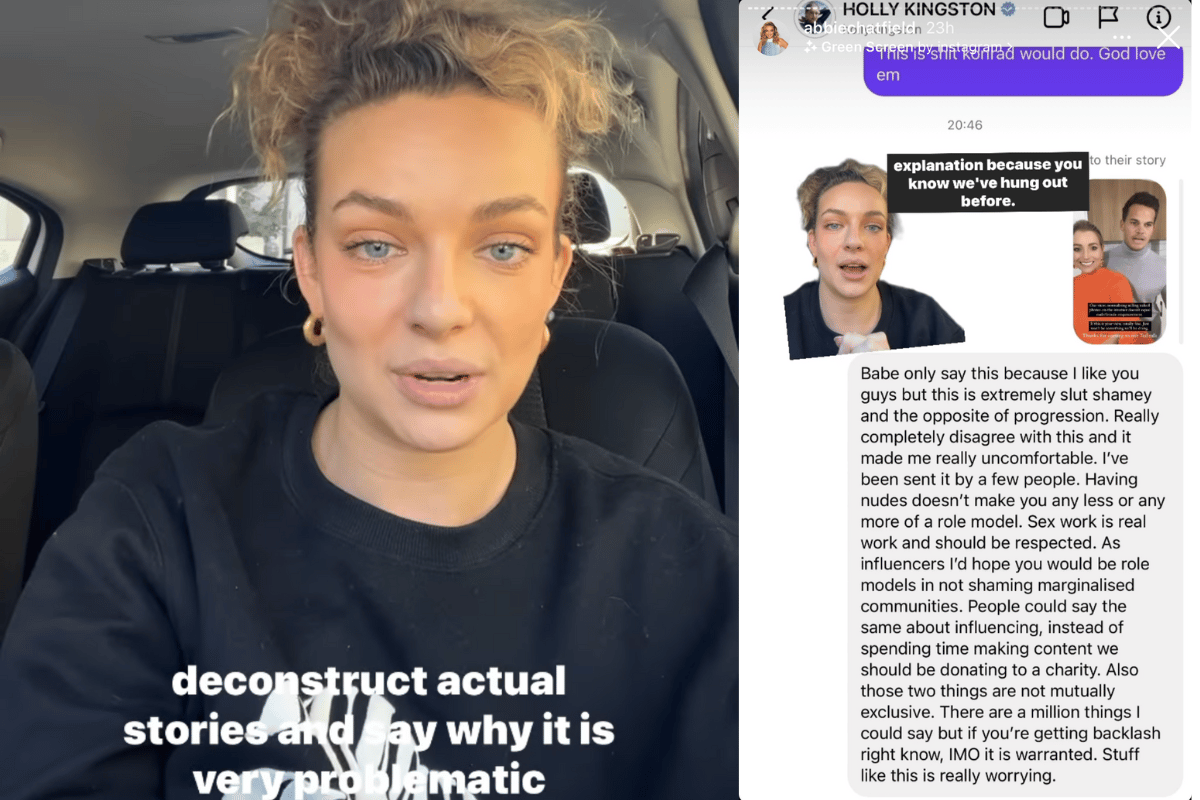 She also went on to detail the context behind reality TV stars turning to OnlyFans, saying it can often come down to financial needs, and that there should never be any judgement attached to those who choose to enter the sex work industry.

"I'm not sure how that's any different from me, or them, or any other influencers who have started on reality TV who use that [fame] to earn money now on Instagram or through other social media – it's literally the same [as OnlyFans], we literally commodify content," Abbie said.

Abbie also added that she was "uncomfortable" with their opinion because sex work often marginalises women, queer people, trans people, non-binary individuals and people of colour.

"All you had to say was 'it's not for us, but all the power to you'," she concluded.

As one former Bachelor franchise contestant, Leah Costa – who has an OnlyFans account – said: "If I was them I'd be more embarrassed selling my integrity publicly endorsing all those crap brands, every single post #sponsored than I'd be privately selling my body on OF."

Megan Pustetto from the So Dramatic! podcast also shared her thoughts.

"The Bachelor couple, who both attended Sydney's top private schools and who are both set to inherit millions from their equally extremely wealthy families, said, from their $2 million dollar apartment in Bondi on Tuesday, whilst draped in Polo Ralph Lauren turtle necks and jewels and flashing $50k+ worth of combined cosmetic dental work, after recently returning from 101 luxury honeymoons," Megan wrote in an Instagram caption.

The Bachelor's Matt Agnew also appeared to have referenced the situation, posting an image on his Instagram stories which said: "Publicly broadcasting s**t opinion - 'No judgement but... be kind'." 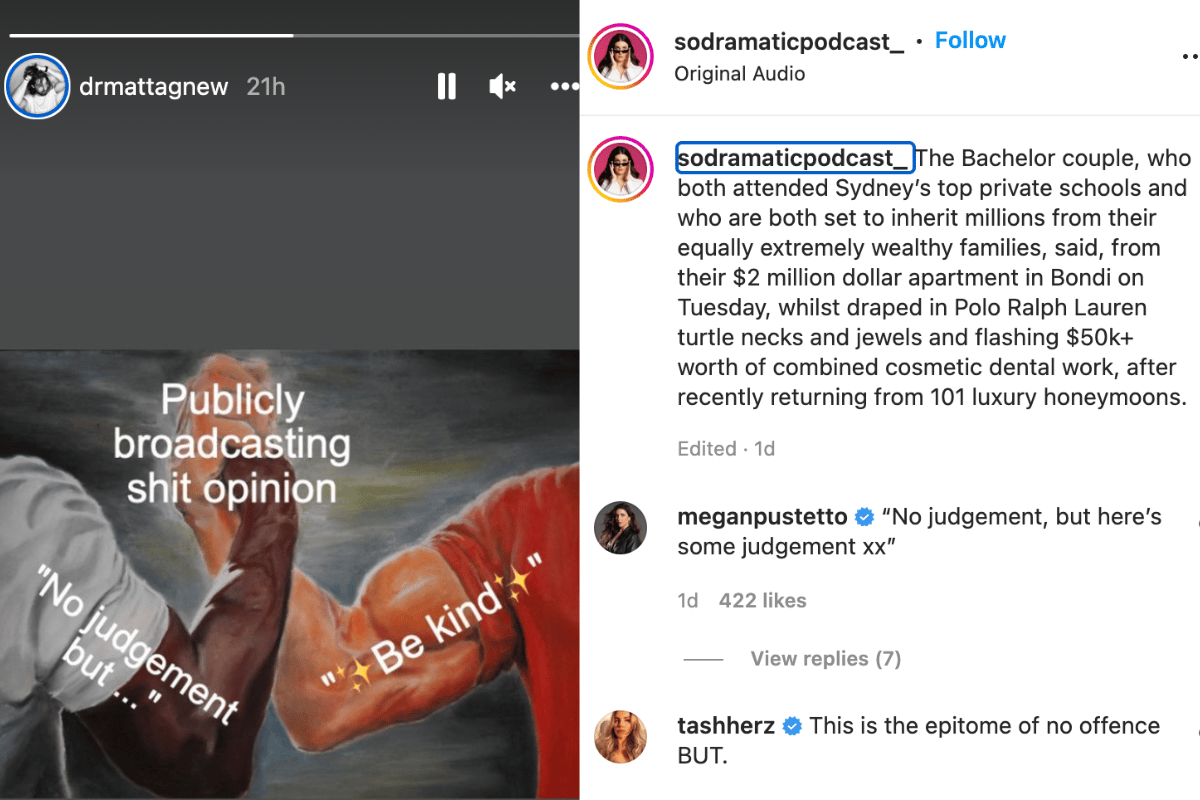 What Jimmy and Holly have said in the wake of the reaction.

Since the reaction, Jimmy and Holly have gone quiet on their social media pages, except for one Instagram story.

The Instagram story they both posted read: "Empowerment comes in all forms, not just doing something you feel pressured to do because reality stars are doing it. If you want to get an [OnlyFans account], get an [OnlyFans]. If you don't, don't."

They continued: "We have a choice to speak about our reasons for it not being on our radar. 99 per cent of the thousands of messages we've received have been completely in support of the message we were trying to get across."

After that response was shared, Abbie then took to her Instagram stories again to say she had been in contact with Jimmy and Holly. The couple have since unfollowed Abbie on social media.

"Jimmy called me... basically said that I should have given him and Holly a heads up – I did within seven minutes of their first video – said that I was being very aggressive with my messages. Let me just say the tone of voice [from Jimmy] was what I imagined a dad getting you in trouble," she said.

"He seems to stick by his opinion and that's fine. But you have to understand the repercussions of that." 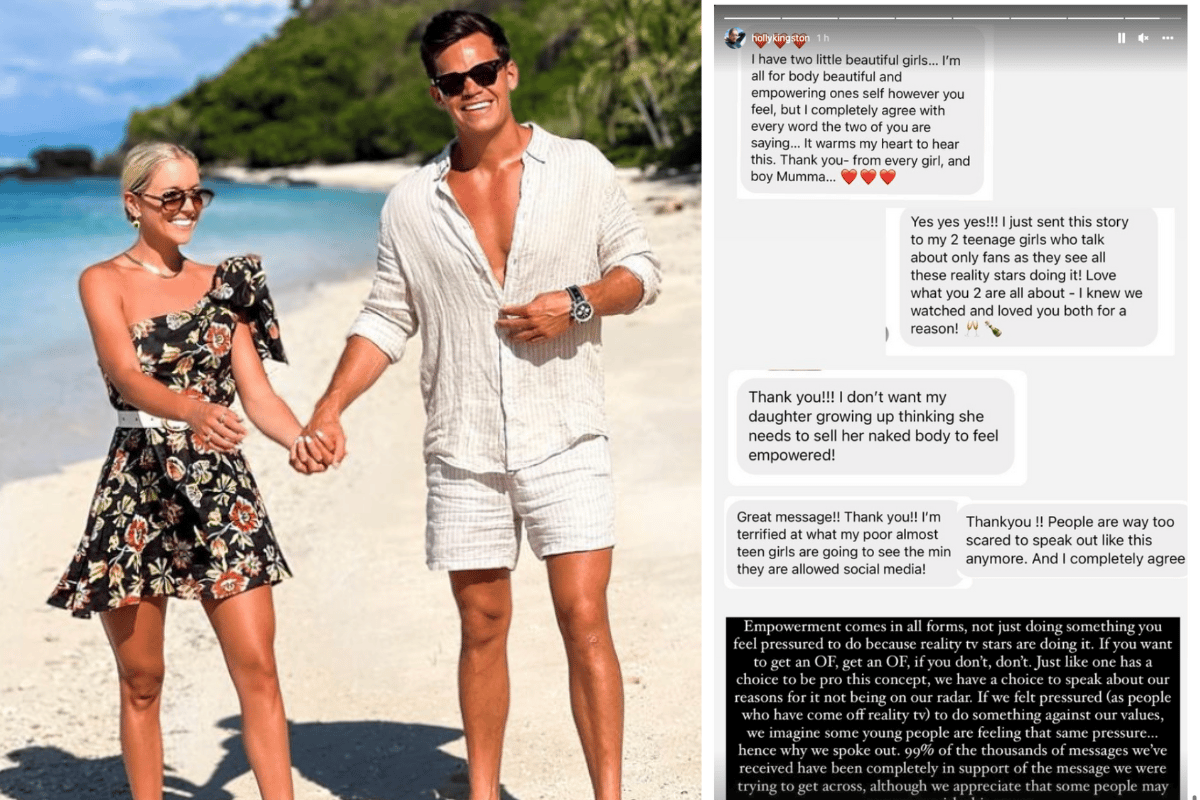 Jimmy and Holly release a second statement a week later.

A week on from the situation, Jimmy and Holly released a second statement via their Instagram.

They explained that since their relationship was made public via reality TV, they have been sent "thousands" of messages being asked if they would set up an OnlyFans account.

They confirmed, as already noted in the first video, they will not be making an account.

"We have no issue with someone who freely and legally works in the sex industry, whether it is on OnlyFans or elsewhere. However, like most of the people who have reached out to us, we don't believe it is the best way to promote male/female empowerment to young people."

They said in the wake of their comments they have been subjected to "abusive messages, character assassinations and cancellation attempts". They referred to it as a "sad reflection on the public conversation in Australia today that disagreement can morph into hatred so readily".

They reiterated that they aren't against OnlyFans, but rather are against cancel culture and bullying people who have a different opinion to you.

"Furthermore, if you have a public profile, we believe it is especially important to encourage a constructive non-biased discussion rather than an attack. It's a shame social media sometimes doesn't produce an environment that is conducive to open and informed debate. We won't be bullied into submission, we will continue to stand up for issues we believe in." 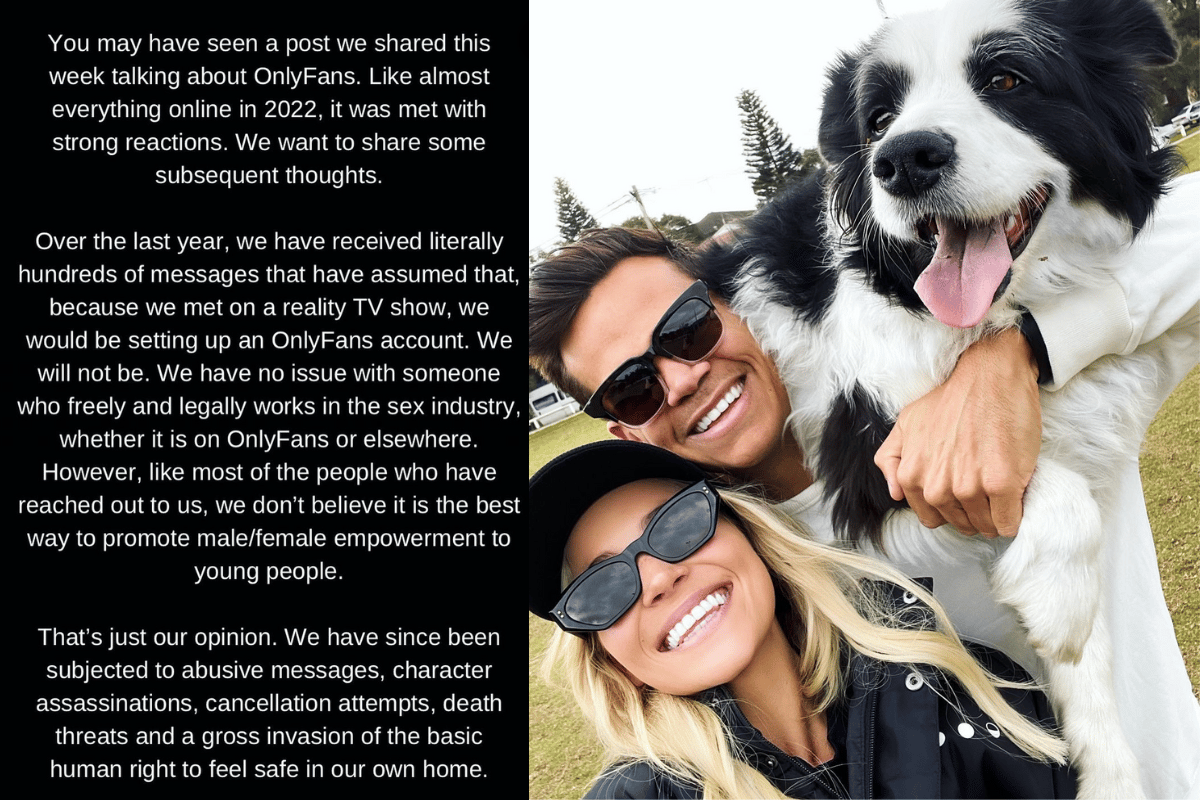 Reply
Upvote
@oh really? You realise they call it the oldest profession because its always existed, right? It doesn't imply exploitation
O
oh really? 12 days ago

Reply
Upvote
1 upvotes
@cat I point is that it has always been exploitation and wrapping it up in any woke term wont change that.
S
simple simon 12 days ago

It’s all well and good to talk about female empowerment

I once heard a full service sex worker say  women in the sex industry feel they have to portray it as an empowered choice because people are so desperate to portray them as victims.
C
cat 11 days ago

Reply
Upvote
@oh really? have you talked to any sex workers about this view?
T
taintedblackcat 20 days ago