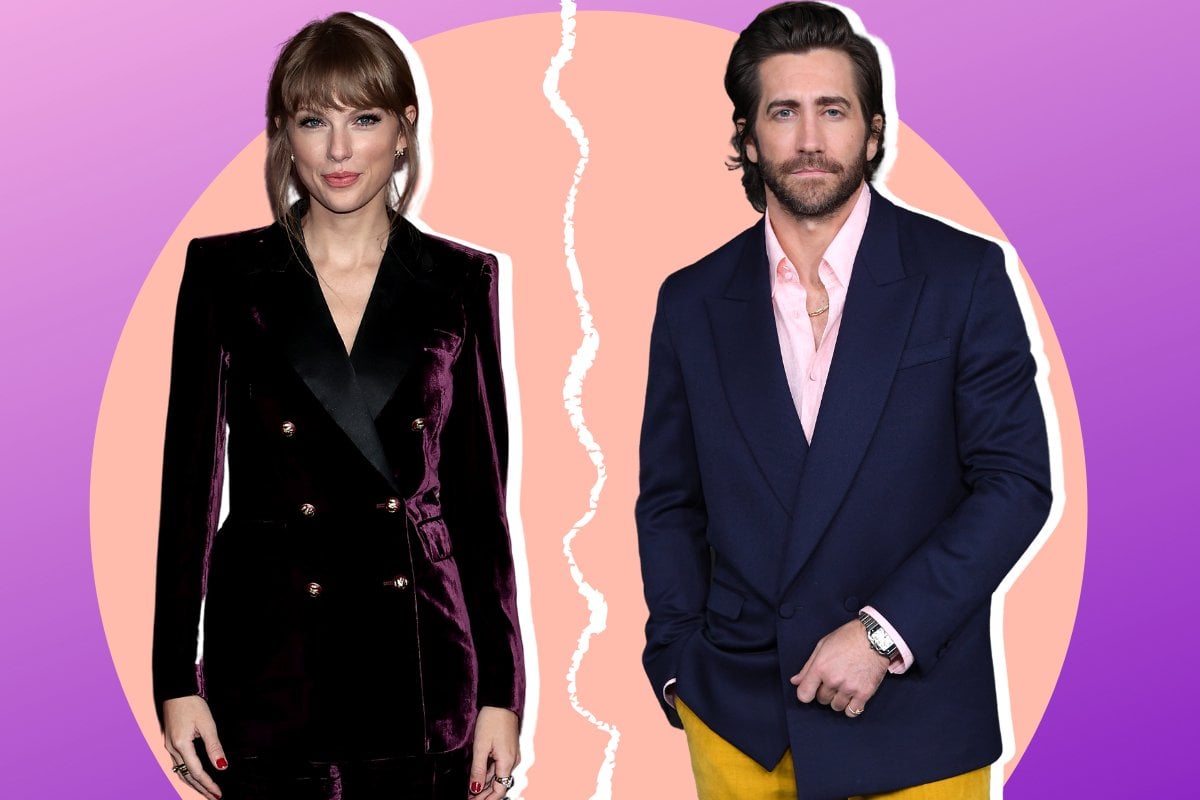 There are a few key points we can take away from this weekend.

The first being that Taylor Swift's still got it; the second being that no one can escape her ire, no matter how many years have passed, and the third being that Jake Gyllenhaal has effectively been 'cancelled' in the eyes of the internet.

And it all has to do with the way he allegedly treated Swift over 10 years ago.

Of course, we can provide all the context you need.

Watch: The teaser trailer for 'All Too Well'. Post continues below video.

Why has the internet cancelled Jake Gyllenhaal... And what has Taylor Swift got to do with it?

Over the weekend, Swift dropped 'Taylor's version' of her hit Red album, originally released in 2012. Of course, in it were new songs we had never heard before, along with re-recorded takes of all the tracks originally on the album.

What had fans most excited was her 10-minute version of 'All Too Well'. Along with it, came a bloody glorious 15-minute feature film starring Stranger Things' Sadie Sink, 19, and Teen Wolf's Dylan O'Brien, 30.

It is widely believed (as in, basically confirmed by fans who double as the CIA) that she wrote the song about Gyllenhaal, who had a short-lived relationship with Swift right before her 21st birthday... He was 29-years-old.

Wait I was right about jake gyllenhaal walking around wearing Taylor’s scarf holy shit I was joking!! But for real?!!! pic.twitter.com/SsTk9HFe6r

The lyrics are as brutal as one can imagine. And fans believe they all refer to Gyllenhaal.

For example, there is a lyric specifically referring to Swift and Gyllenhaal's three-month-long romance: "Check the pulse and come back swearing it's the same / After three months in the grave / And then you wondered where it went to as I reached for you / But all I felt was shame and you held my lifeless frame".

And of course, there is also the 21st birthday party he apparently didn't come to: "You who charmed my dad with self-effacing jokes / Sipping coffee like you're on a late-night show / But then he watched me watch the front door all night, willing you to come / And he said, 'It's supposed to be fun turning twenty-one'".

Swift is known for dropping major hints about who her music is about, and the easter eggs were plentiful in not only 'All Too Well' but the music video as well. 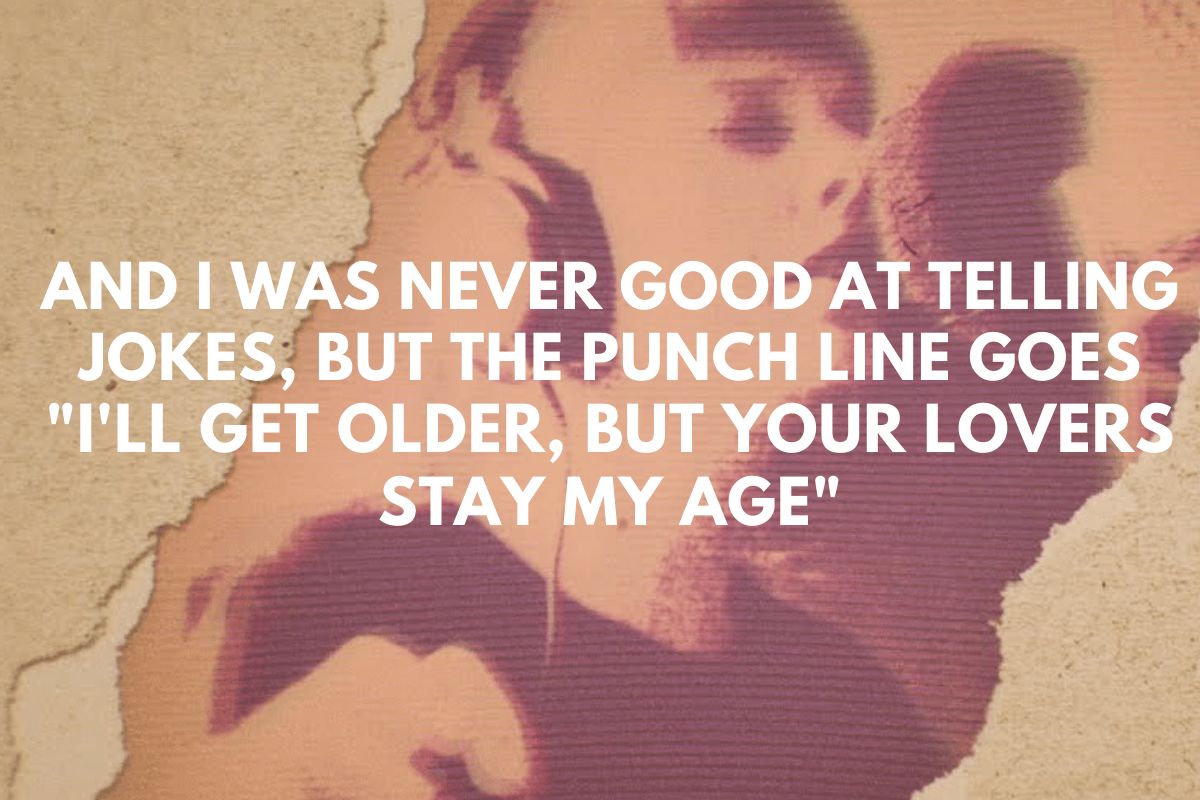 Lyrics from the 10-minute version of 'All Too Well'. Image: Youtube. Some of the most talked about lyrics perhaps refer to Gyllenhaal's new girlfriend, Jeanne Cadieu who is 25-years-old. They've been dating since 2018.

There is a pointed reference to his new partner, where Swift sings: "You said if we had been closer in age / maybe it would have been fine... And I was never good at telling jokes, but the punch line goes / 'I'll get older, but your lovers stay my age'".

no bc it’s the way 40 year old jake gyllenhaal’s current girlfriend is 25 years old. “ill get older but your lovers stay my age” absolutely based. pic.twitter.com/W9FcAodeJY

There's also that whole scarf incident, which in 'All Too Well', Swift accuses him of never getting it back to her: "And I left my scarf there at your sister's house / And you've still got it in your drawer, even now... Now you mail back my things and I walk home alone / But you keep my old scarf from that very first week / 'Cause it reminds you of innocence and it smells like me".

It's become such a controversy over the years, that even Gyllenhaal's actor sister Maggie, has weighed in on it.

While on Watch What Happens Live with Andy Cohen, she was asked if Swift had actually left a scarf at her house.

"I never understood why everybody asked me about this scarf... It's totally possible, I don't know," she responded. 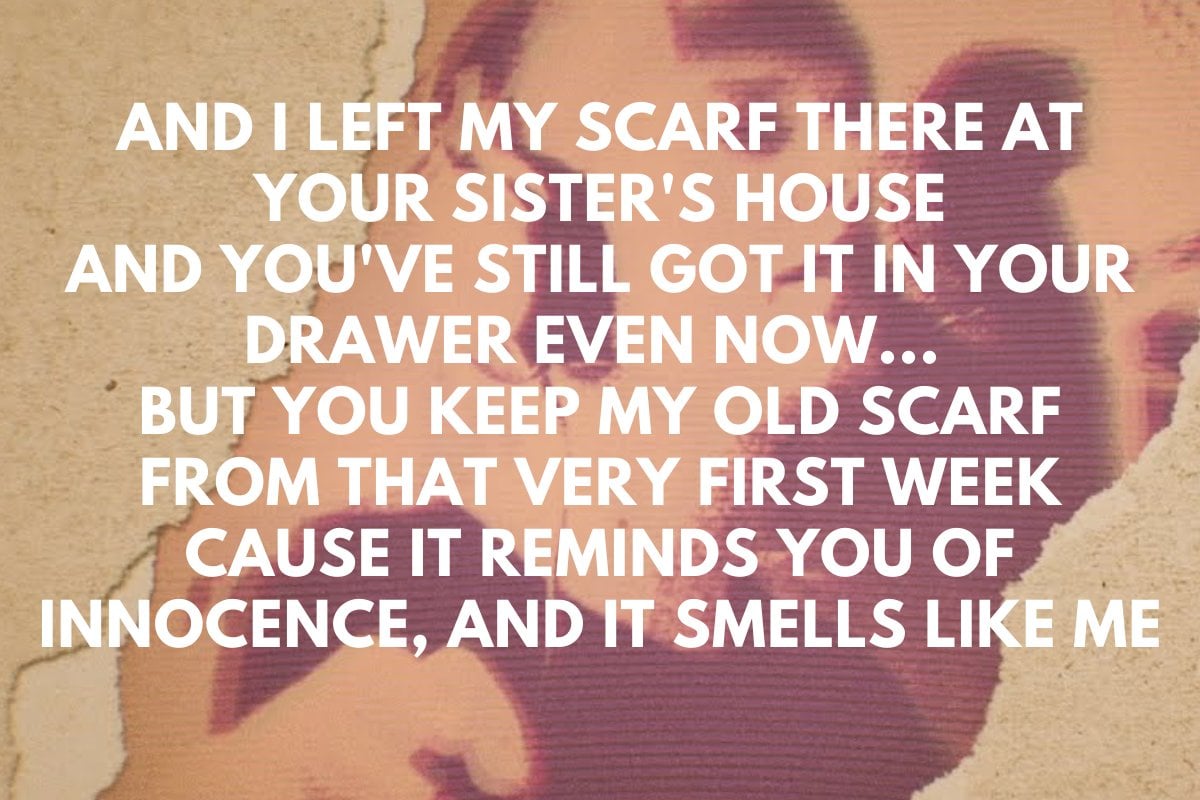 Lyrics from the 10-minute version of 'All Too Well'. Image: Youtube.  While speaking to Jimmy Fallon, Swift explained her feelings while writing 'All Too Well'.

"I was going through a bit of sad time," she said. "I was in band rehearsals for a tour that I was about to go out on called the Speak Now tour. I showed up for rehearsals, and I just was really upset and sad and everybody could tell — it was really not fun to be around me that day — and so I started playing guitar and just playing the same four chords over and over again.

While you're here, listen to Mamamia's entertainment podcast for your ears, The Spill. Post continues after audio.

What was the reaction to 'All Too Well'?

There have been a few, to say the least.

Fans across the globe have jumped on the Gyllenhaal hate train, and as a result, some quite hilarious tweets, memes and reactions have been produced.

wow I can’t believe today is jake gyllenhaal’s last day of peace like. ever

How has Jake Gyllenhaal reacted to the criticism?

To keep it short and sweet, the actor is yet to say absolutely anything about his relationship with Taylor Swift.

But over the weekend, he was seen out at the 11th Hamilton Behind The Camera Awards, in support of his sister, Maggie Gyllenhaal who was awarded Breakthrough Director for her work on The Lost Daughter. 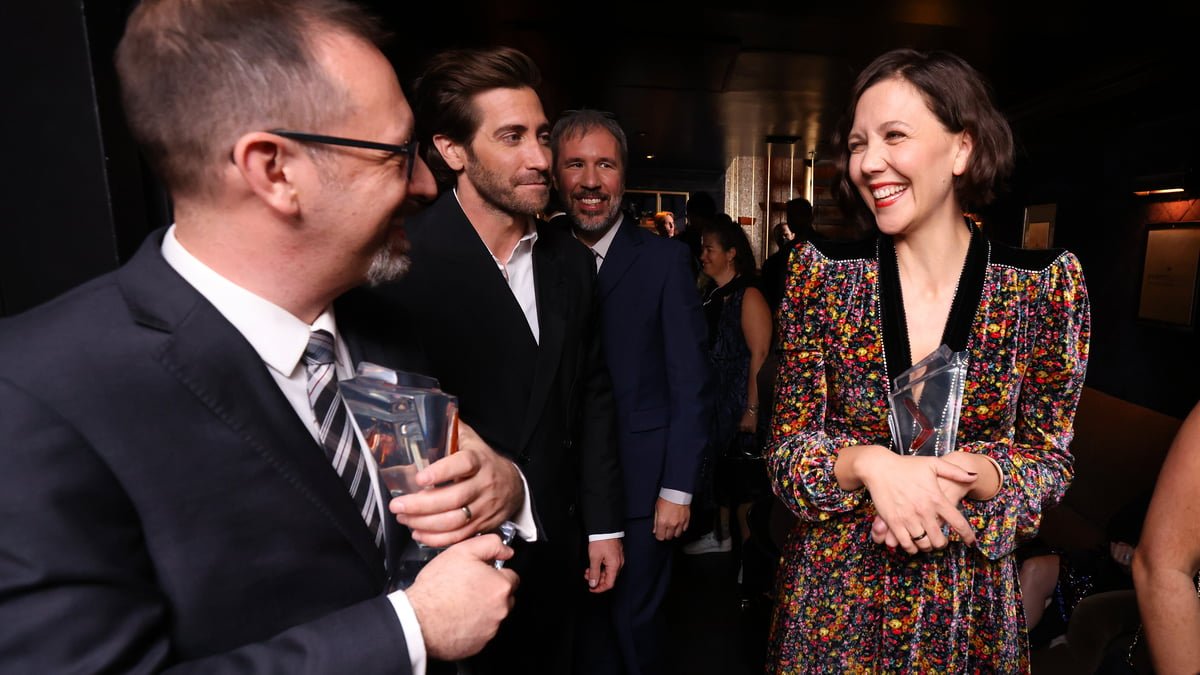 Mandell Winter, Jake Gyllenhaal, and Maggie Gyllenhaal at the Hamilton Behind The Camera Awards. Image: Getty. Of course, Gyllenhaal may never open up about his short-lived three months with Taylor Swift, but fans have pointed to his silence.

JAKE GYLLENHAAL UR SILENCE IS DEAFENING

I do think that Jake Gyllenhaal needs to break his silence, make a statement of some sort, turn himself into the cops idk but he needs to do something

In 2009, Swift said in an interview: "If guys don't want me to write bad songs about them, they shouldn't do bad things."

After this weekend, we can only hope Jake Gyllenhaal has learnt his lesson.

Reply
Upvote
2 upvotes
I feel for this guy.  He had a 3 month romance with her.  He is probably not saying anything because he can't believe that it is still haunting him a decade later.  She may sing that they are never getting back together but she does not appear to have gotten over him.
C
cat 2 months ago

Reply
Upvote
1 upvotes
@cat which is probably why he is not commenting.  The mini movie though is new and seems to have themes from that relationship. This is all fine but perhaps she should make a statement to say to her fans that there is no need to cancel him. It’s an old song re-recorded and she has moved on.  Otherwise she is complicit in the vitriol against someone for no reason. What you step over you endorse.
C
cat 2 months ago

Reply
Upvote
@mb1111 I agree she should control her fans, but she has steadfastly refused to intervene in their behaviour. It's not so much a matter of "not having gotten over him", more that this is a pattern of behaviour and hes just the latest one in the path.
L
laura__palmer 2 months ago

Reply
Upvote
9 upvotes
I’m going to say it…. Taylor Swift fans need to calm down a bit. It’s all a bit hectic, really.

Reply
Upvote
1 upvotes
@laura__palmer There is a LOT of speculative detail, not gonna lie, skimmed it and summarised it as:
Taylor still a bit salty, or more likely, needs publicity for something she's launching.
Jake avails himself of the ladies that (I'm betting) throw themselves at him.
C
cat 2 months ago

Reply
Upvote
@gu3st she's not salty, she just had to re-record the album. That is the thing she's launching.
C
cat 2 months ago

Reply
Upvote
2 upvotes
@laura__palmer honestly  if I was Jake I'd think about suing her, she does nothing to control her insane fans
L
laura__palmer 2 months ago