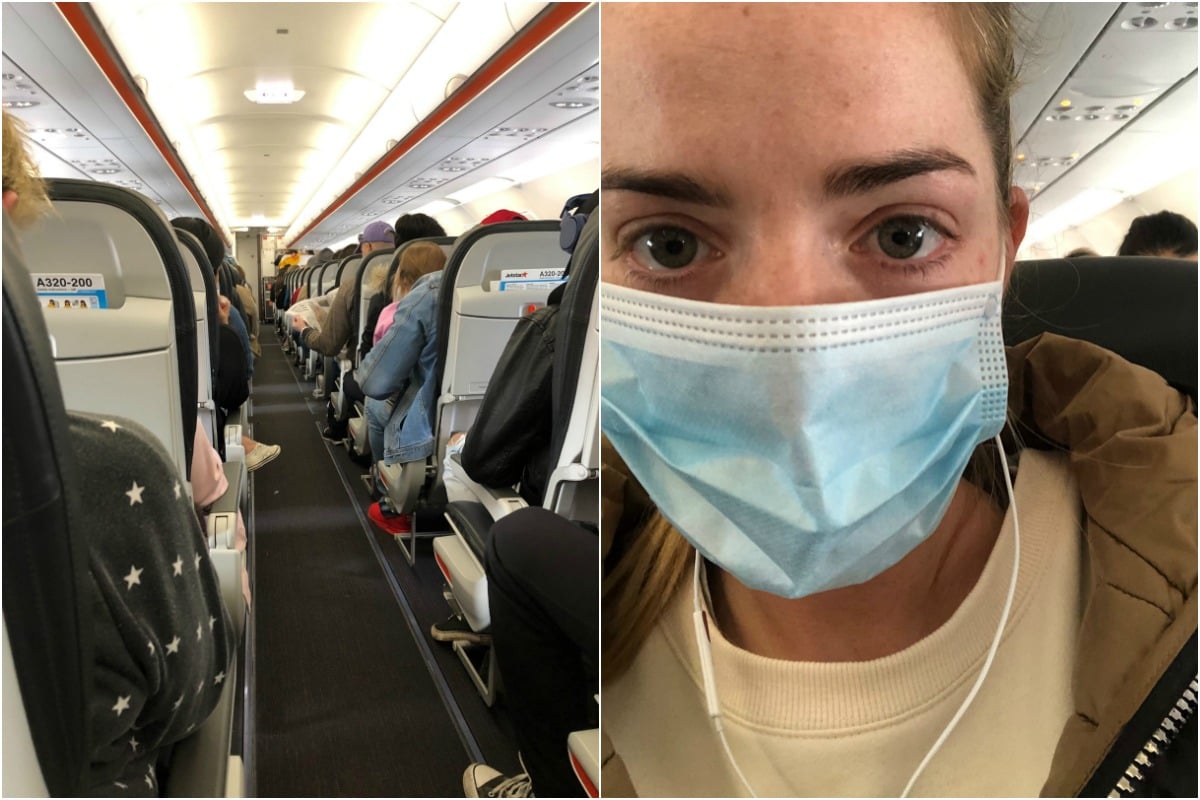 Arriving at Sydney airport on Thursday morning ahead of a flight to Queensland for my grandfather's funeral the terminal was a ghost town.

All of the shops were shuttered closed, and airport staff were standing at the ready with water bottles and face masks.

Everywhere I looked there was a sign reminding me to keep my distance and a few nervous-looking people, like me, wandering around the usually buzzing corridors.

WATCH: How NSW is responding to COVID-19. Post continues after video.

Already mask clad myself, I made my way to my gate to wait for my flight, taking comfort in the fact there were plenty of seating areas around me that had been blocked off to stop people sitting in the direct vicinity of others.

I think that's why I was so taken aback when I stepped on to the plane.

Walking down the plane aisle it became evident very quickly that whatever rules existed on the ground were being thrown out the window, literally, in the sky.

The plane was full. Completely full.

For the first time in five months, I found myself sitting shoulder to shoulder with 200 strangers, only half of whom were wearing a mask.

It was confronting and confusing and to be honest, terrifying. 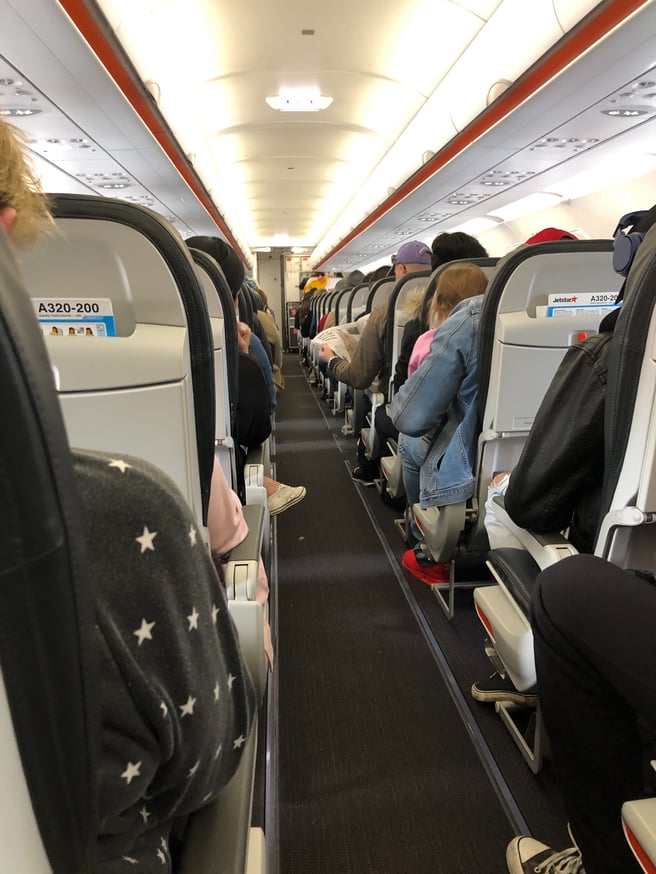 The plane was practically full, with only a handful of spare seats. Image: Supplied.

I sat perched on the armrest of my aisle seat, trying to put at least a little distance between my row mate and me, and thought of nothing else but my probable and inevitable contraction of coronavirus for the next hour and 20 minutes until we landed.

In hindsight, I think I was either having, or on the verge of having a panic attack, and I know I wasn't the only one.

"There are wayyyyyy too many people on this flight," the person in front of me texted to a friend before we took off. She followed the message up with three scared face emojis.

As we made our way up into the sky, my terror soon became intermixed with anger as I dissected the events of my morning mid-flight.

Why didn't the staff ask me about symptoms, or check my temperature, or do... anything before I boarded the flight?

Why was I being told to socially distance on land, only to be packed in like a sardine on the plane?

Why aren't masks mandatory on flights?

When we arrived at Brisbane airport, the army was waiting for us.

✈️ TRAVEL UPDATE ✈️ With the Queensland Border reopening to all states (except Victoria), there is updated travel info that you need to know 👉 https://t.co/zkjsYElfzC

✔️ For tips to help you travel well, check out 👉 https://t.co/Y4RLOnKu8I pic.twitter.com/Tj5izjLIqD

My fellow passengers and I walked past the armed guard of men and women in camouflage to a dozen desks being manned by police officers. They interrogated my reason for flying, which suburbs I had frequented in recent days in Sydney and whether I had any symptoms.

I've just got off a flying petri dish, shouldn't you have asked me that earlier? I thought to myself.

As someone who spends every single day reporting on the state of coronavirus in Australia, I know how on a knife's edge we are right now. With Victoria already in lockdown again and recording hundreds of new cases a day, I know it's not going to take much for the rest of us - especially NSW - to meet the same fate.

I assumed because I had been able to book a flight, there would be safety measures in place to accommodate me.

While I know it's probably not profitable to sell every second seat on a flight, especially given the state of our global aviation industry right now, I think I was expecting some kind of cap on numbers, or at least some more stringent rules to weed out those not telling the truth about their movements.

Flying used to be so exciting.

But even after the immediate threat of coronavirus fades, it's hard to imagine how getting on a plane will ever feel normal and carefree again.

During my three-day round trip interstate, I was left perplexed that I could read that Victoria had recorded 428 new cases of coronavirus in the past 24 hours. That NSW had just announced a new 10-person booking rule for pubs, and that 34 cases had now been traced back to a Sydney pub.

And yet I was still allowed to fly to Queensland, out of Sydney, relatively undisturbed.

For a “different” way to look at the news, sign up for my monthly Deep Dive newsletter.

B
bethany 2 years ago

Reply
Upvote
So you willingly got on a plane and then were annoyed that other people got on the plane as well? You're part of the problem.
F
fightofyourlife 2 years ago

Reply
Upvote
6 upvotes
@bethany It was for her grandfather's funeral. It's not like she was heading to the Gold Coast for a beach holiday.
And it sounds like the author's issue was not just that the flight was full but that the airline did not bother taking any measures to try to make the flight as safe as possible. Masks should be mandated and screening questions should be asked on both departure and arrival.
Resources
Very Peri
News
General
Opinion
True Crime
Politics
Sport
Explainer
Entertainment
Celebrity
Reality TV
Movies
TV
Books
Rogue
Royal
Lifestyle
Beauty
Fashion
Weddings
Home
Wellness
Health
Fitness
Travel
Food
Family
Before The Bump
Pregnancy
Baby
Kids
Teens
School
Parent Opinion
Work & Money
Money
Finance
Career
Lady Startup