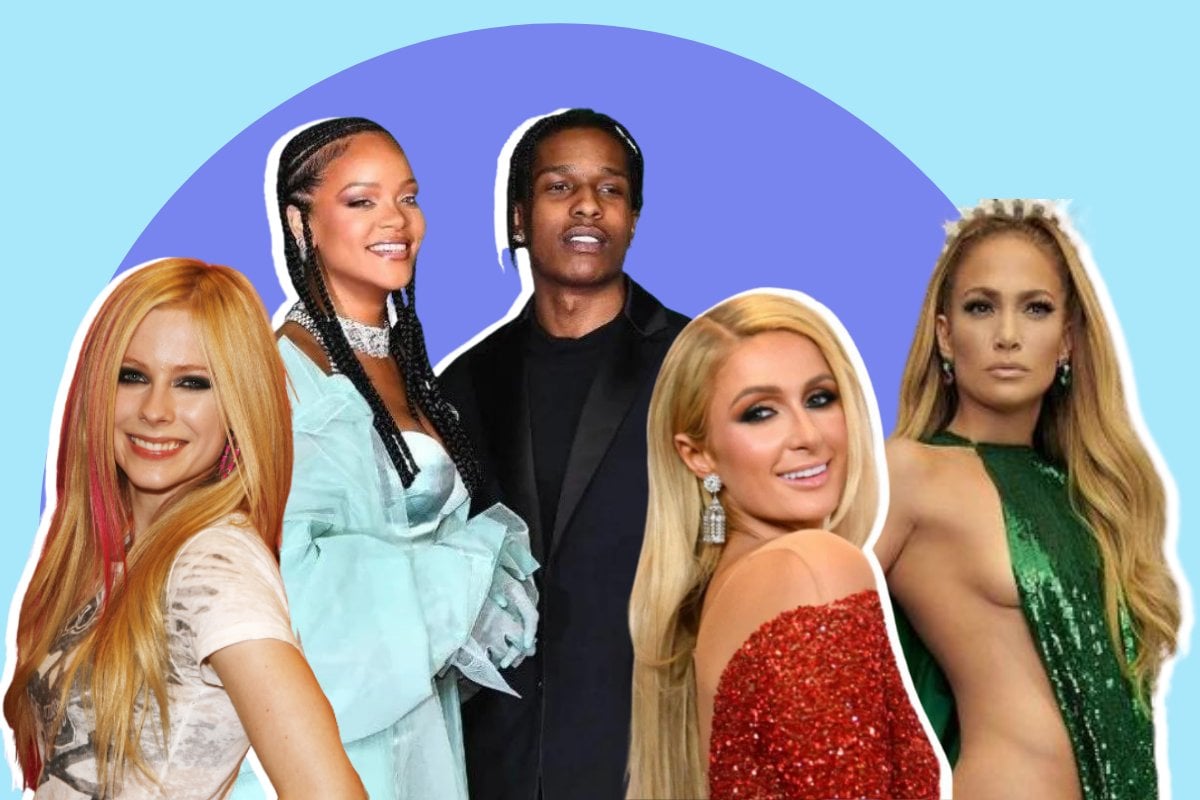 Celebrity gossip stories - whether true or not yet confirmed - can take on a life of their own.

And we've seen recently just how easy it is for rumours to spread like wildfire online. Take this past weekend's example of Rihanna and A$AP Rocky - all it took was one tweet for things to blow up.

On Thursday, the internet's 'messiest fashion influencer', Louis Pisano, dropped a rumour on Twitter they knew would get people talking. It read - "Rihanna and A$AP Rocky have split. Rihanna broke up with him after she caught him cheating with shoe designer Amina Muaddi."

In a few follow up tweets, the influencer added: "Amina was responsible for designing Fenty’s footwear offering and Rihanna is often seen in custom shoes from her own label. A$AP and Amina is not new though as she was seeing him years ago and also collaborated with him on a collection of shoes. Things apparently hit the fan at Craigs in LA. Allegedly this happened during Paris Fashion Week."

But alas, it was utter BS.

Video via The Late Late Show with James Corden.

Neither A$AP Rocky nor Rihanna has responded to the rumours yet, but designer Amina Muaddi had to clarify the situation, given how "vile" and "unfounded" the rumour was.

"I initially assumed that this fake gossip - fabricated with such malicious intent - would not be taken seriously."

But what the Internet is very good at doing is taking small stories that are yet to be fact-checked and making them gospel truth.

From the likes of Paris Hilton and her monogrammed top, to Jennifer Lopez and her insured bum, we unpack some of the most iconic celebrity stories that were completely made up.

JLo and the rumour she insured her bum for $27m. 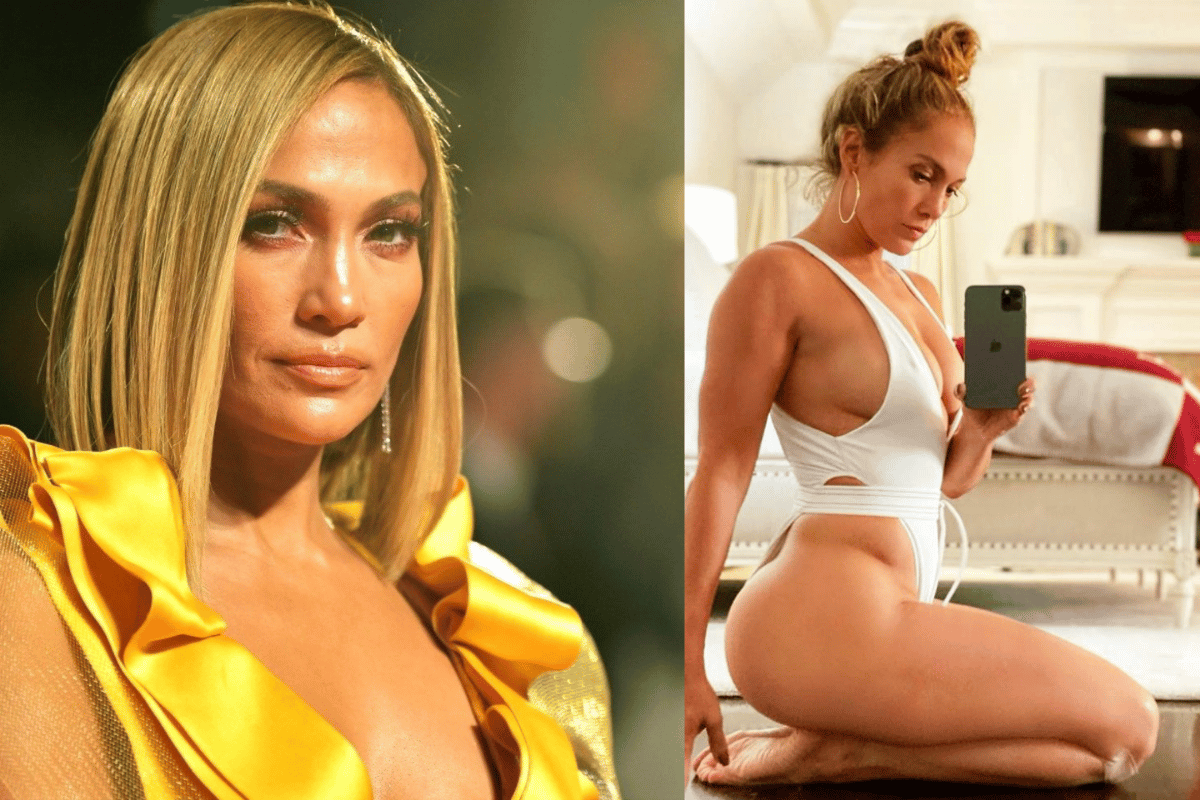 For years now there have been rumours swirling that JLo decided to insure her iconic bum for a cool $27 million.

She's not the only celebrity to be suspected of this.

Heidi Klum said she had her legs insured while working as a model.

Listen to The Spill. The one question we should be asking about Jennifer Lopez's face. Post continues after audio.

But unfortunately, Jennifer Lopez is not one of them.

When on the road with James Corden for his popular skit 'Carpool Karaoke', JLo was asked to set the record straight.

"No! There is no such thing as that. [Is it in case] something happens to it? It disappears? Somebody steals it?" she joked.

As Corden said - "It would be odd to insure your ass. What are you doing with it? Is it in case you sit on something sharp?" 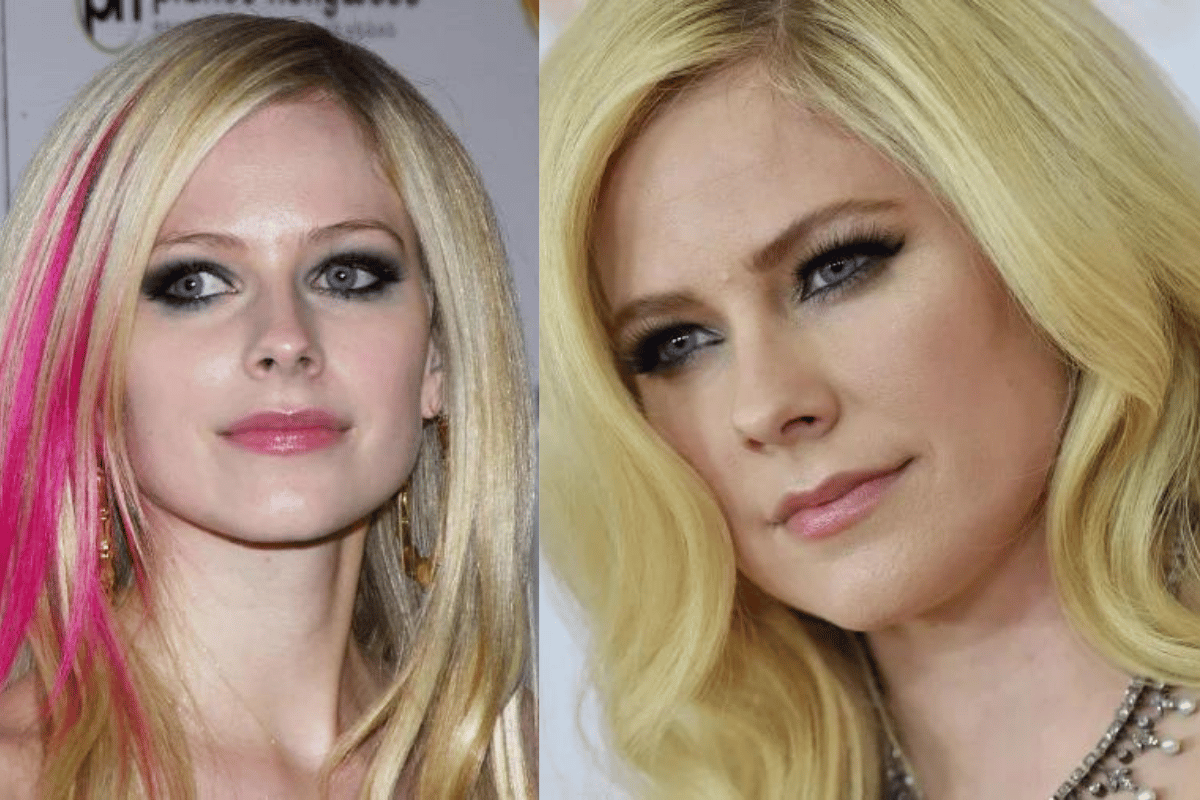 According to a dark part of the Internet, Avril Lavigne died between 2002 and 2004. It's believed that since her 'death', the singer has been replaced by her friend and actress, Melissa Vandella.

Apparently, Lavigne's record company initially hired Vandella in 2002 to be her body double after the then-17-year-old grew weary of fame after the release of her hit debut album Let Go in 2002. As the story goes, Vandella then took over Lavigne's identity and career after the 'Complicated' singer allegedly died.

Diehard believers claimed Melissa-Avril's face is different to Lavigne's 'real' face, with some alleging that her moles and permanent skin blemishes have also disappeared. It appears they may have forgotten that with celebrity status comes a lot of cosmetic, makeup and skincare opportunities, many of which would blur skin blemishes.

While the 'Avril Lavigne is dead' theory is ridiculous to say the least, the pop star did disappear from the spotlight from 2014 to 2018. We now know this was because she was struggling with Lyme disease.

In a statement shared with PEOPLE in 2018, the eight-time Grammy nominee said it felt like she "was dying".

"One night, I thought I was dying, and I had accepted that I was going to die," she said. "My mum laid with me in bed and held me. I felt like I was drowning. Those were the worst years of my life as I went through both physical and emotional battles. I was able to turn that fight into music I'm really proud of achieving."

The suggestion that Jay Z had cheated on Beyonce with Rihanna. 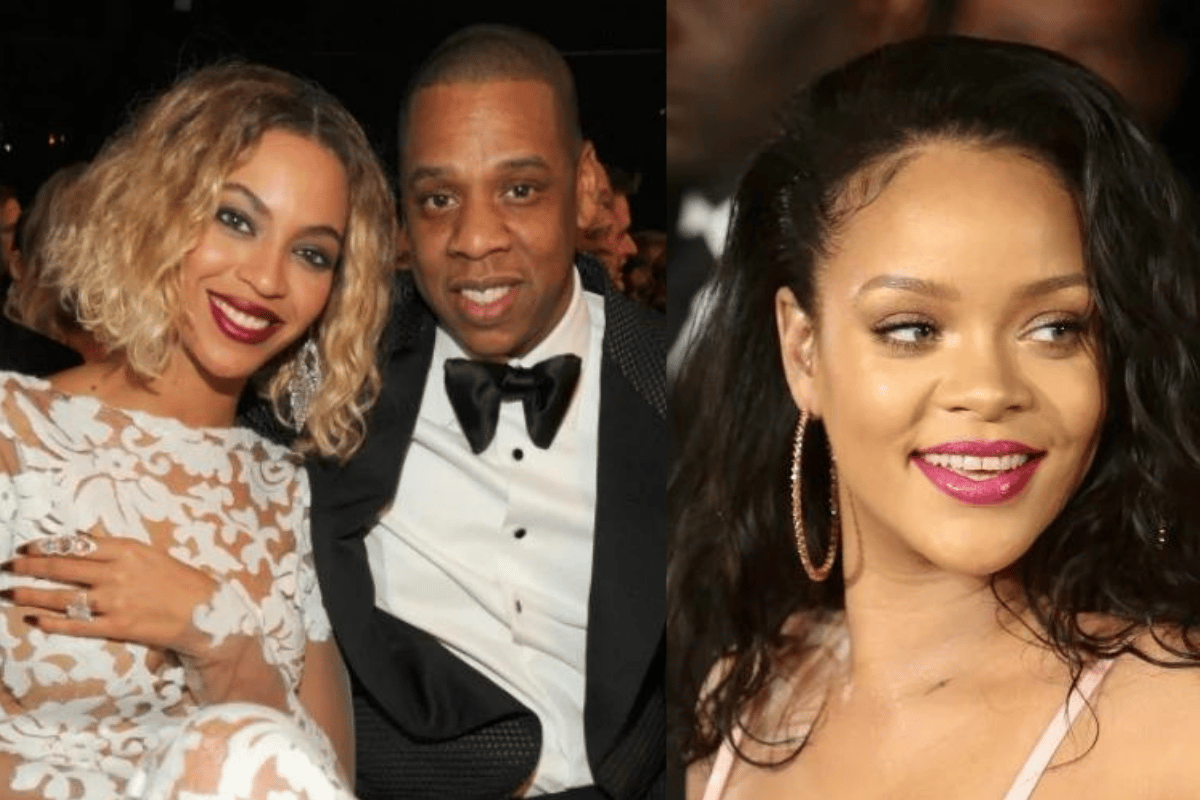 Who could forget that infamous moment between Beyonce's sister Solange and Jay Z over his affair with 'Becky with the good hair'. Well before that incident, there was another insidious cheating rumour that affected Beyonce and Jay Z's relationship - and it had everything to do with Rihanna.

Back in 2005, Rihanna was an up-and-coming singer, known as Jay Z's 'musical protégé'.

And in a bid to boost her profile, Rihanna's then-publicist decided to orchestrate some fake cheating rumours in order to give his client some publicity.

But it was only in 2015 that Rihanna's ex-publicist Jonathan Hay admitted the truth. He said - "The PR stunt that I did was out of desperation to help break 'Pon de Replay'. It was reckless, and I didn't think it was going to work. I was just throwing spaghetti at the wall to see what would stick."

Yet the rumour stuck around, with Jay Z having to address the rumours multiple times throughout the years. And although he didn't cheat on Beyonce with Rihanna, he definitely cheated on her with someone. 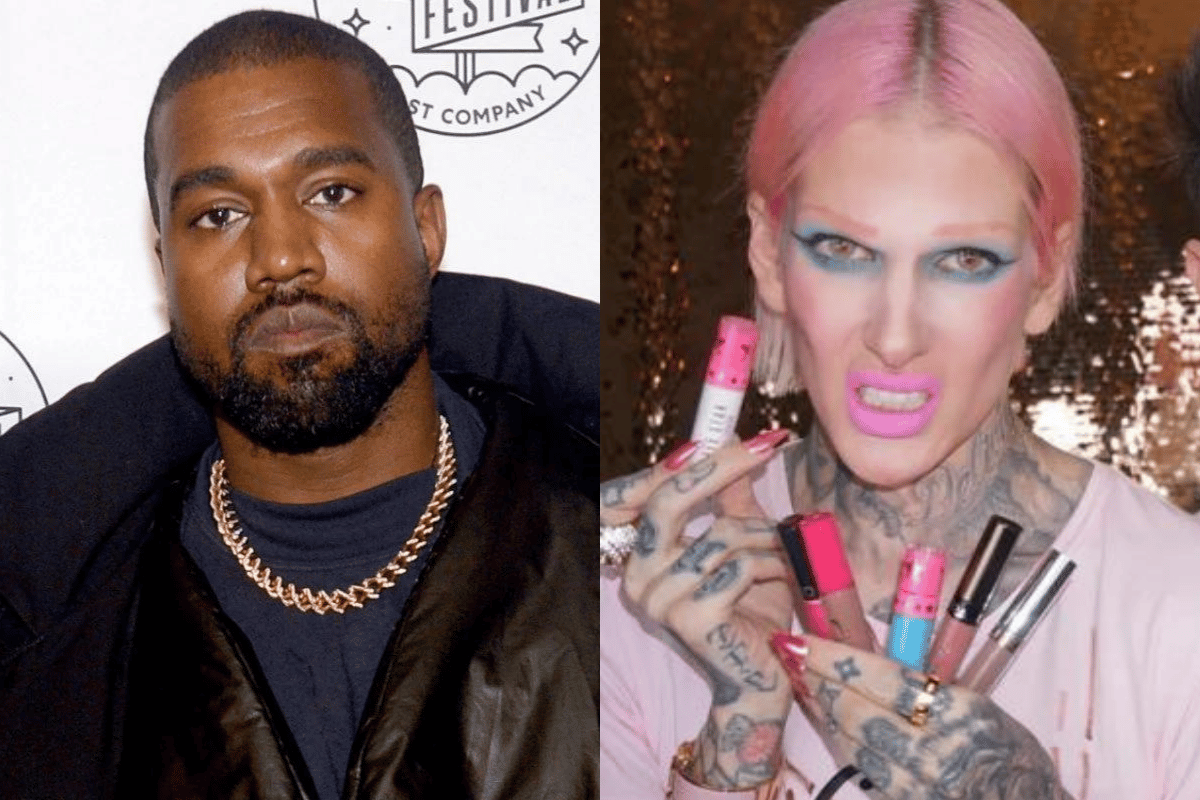 When news broke that Kim Kardashian and Kanye West's marriage had come to an end in early 2021, multiple outlets began reporting that there was a certain someone involved in the breakup.

That certain someone was allegedly YouTuber/beauty influencer Jeffree Star. And the whole rumour was based on a single TikTok video, which suggested that a relationship between Kanye and Star had played a part in the split.

The lack of evidence proved just how unreliable the initial source of the rumour was. But you better believe people still gossiped over it for months!

In a YouTube video, Star confirmed it was not true, saying - "Let me just say this one time for any news outlet, I like very tall men. Me and Kanye have never hung out and this whole thing is really funny. Jeffree Star is single and I've never slept with Kanye."

As for Kanye's reps, a source "close to the couple" told E! News - "There is absolutely no truth to the Jeffree and Kanye rumours."

Paris Hilton and her 'stop being poor' top. 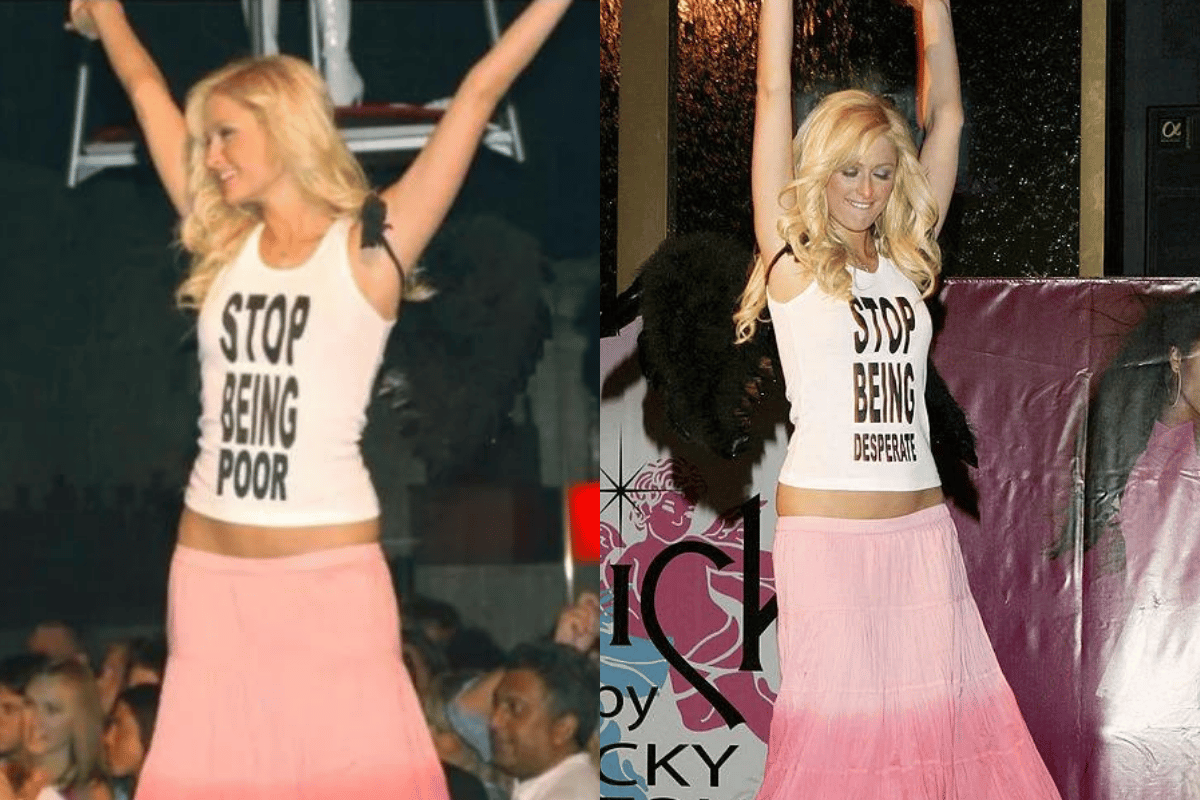 To end on a doozy, who remembers the Paris Hilton 'stop being poor' top fiasco? Because we sure do!

In 2005, Hilton allegedly wore a top that had the words 'stop being poor' on the front. And of course, that hypocritical statement about consumerism and capitalism coming from someone whose family's wealth is in the billions didn't go down well.

But the whole thing was actually a fake.

After ignoring the viral image/meme for quite some time, Hilton posted a video on social media to set the record straight.

"So there's this photo online of me," she says, displaying the photo in the background. "I'm sure you've seen it. I never wore that shirt. This was completely photoshopped. Everyone thinks it's real. But that's not the truth."

The video then switches to another image of Paris beside her sister Nicky, where Paris' top clearly reads - 'stop being desperate'.

"Don't believe everything you read," she concluded.

Reply
Upvote
To create such a lie about Rhianna when she’s so far along is just plain horrible.
M
mamamia-user-482898552 4 months ago

Reply
Upvote
@taintedblackcat  What? That rumour was circulating 17 years ago.

Reply
Upvote
@rush ...Which is not cited in this article. Just quietly, I'd be side-eying the guy over his arrest for assault with a deadly weapon more than rumours about infidelity.

Reply
Upvote
1 upvotes
@mamamia-user-482898552 it's mentioned at the start of the article.

On Thursday, the internet's 'messiest fashion influencer', Louis Pisano, dropped a rumour on Twitter they knew would get people talking. It read - "Rihanna and A$AP Rocky have split. Rihanna broke up with him after she caught him cheating with shoe designer Amina Muaddi."