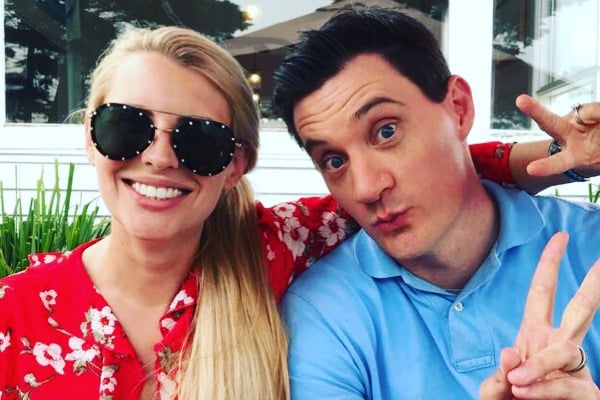 1. Ed Kavalee used to date a contestant on Australian Survivor. And his wife Tiffiny Hall had no idea.

It turns out Ed Kavalee used to date a contestant on Australian Survivor.

Except… his wife had no idea.

The comedian, who is currently co-hosting the Hit Network’s Hughesy and Kate, was forced to mention the previous relationship to his wife Tiffiny Hall after recent Survivor evictee Shaun Hampson was interviewed on the radio show.

Off air, Hampson shared that Kavalee’s name came up in the Survivor camp, as he used to date Melbourne educator Casey, who was also a contestant on the show.

“I told her [Hall] this afternoon,” Kavalee told Hughes.

“I buried it in some other info. We had three topics, one was a trip, one was a potential anniversary present for her and one was that I used to go out with a girl on Survivor.”

After being grilled by Hughes over his ex, Kavalee said that Casey “is a lovely girl”.

Looking so fresh before heading into the game of Survivor! #survivorau #gorman #fiji #survivor2019

“Obviously I haven’t seen her in a while. I didn’t know she was in Survivor until her head bobbed up on the TV,” he said.

2. “She still has feelings for him.” The Bachelor’s Abbie may not be completely over her ex.

From the moment Abbie strolled onto our screens and confidently told the nation she’s a Gemini, she’s been at the centre of controversy… particularly after a certain dog c**** debacle.

And now, according to an ‘inside source’ who spoke to NW, Abbie may still has some lingering feelings for her ex boyfriend.

“Abbie was saying she still had feelings for him before entering the mansion,” an source apparently disclosed.

“We’ve also heard from the girls that she told them she was still in love with an ex.”

Is this why Abbie’s intentions have been questioned by the other girls in the mansion? Is Matt nothing more than a rebound? Who even is this mystery ex? We have so many questions!

The good news is we might not be completely left in the dark. According to NW the ex in question is likely to be Scottish backpacker Greg Gregor, who Abbie dated at the end of last year.

“I met her through my sister when she was on holidays in Scotland. We got along straight away – we had fun and travelled together,” Greg told the publication.

Hopefully we get some answers soon.

And up until now we knew very little about why Langbroek decided to leave the Hit Network’s national drive show.

This morning, Hughes appeared on Sunrise to tell us what really went down between the pair.

“It’s a weird one because she’s gone to Italy to find herself in Italy with her family,” Hughes said.

Since the start of the year, the pair were co-hosting the show from different studios, while Langbroek was living in Italy with her husband and four kids.

“She’s over there and we followed her and set up a little studio there in Bologna, so she can broadcast the show from there and she was doing that for the first six months of the year.”

That is until Hughes received a text message.

“She just texted me a couple of weeks ago and said, ‘Nope, can’t be bothered for the rest of the year.’

“I hadn’t heard from her in a couple of weeks and then just a text message!'”

4. “I’ll take that feeling for as long as I can get it.” Osher Gunsberg on becoming a new dad.

Earlier this week, Osher Günsberg and his wife Audrey Griffen announced that they had welcomed their first baby together, a son named Wolfgang.

Now, a few days on from baby Wolfie’s arrival, The Bachelor host has shared an adorable post of his first skin-to-skin moment with his son.

Getting skin to skin with our boy Wolfie about ninety minutes after he was born. ⁠ ⁠ On the advice of superdad @kurtfearnleyinsta, I was whispering my first words to him, welcoming him to the world and making some promises to him. ⁠ ⁠ To say that the smell of him seeped into my brain and started to rewire things is an incredible understatement. ⁠ ⁠ We are now a few days in, and between feeds & nappy changes – whenever I can I’m whipping off my shirt and charging up on this little guy like he’s an induction stove. ⁠ ⁠ I don’t know how long he’ll let me do it – but holy moly I feel the gears shifting between my ears when we cuddle like this. ⁠ ⁠ I can’t nurse him like @audreygriffen can – yet when he’s grisly but then settles when he’s on me? ⁠ ⁠ I’ll take that feeling for as long as I can get it. ⁠ ⁠ xx⁠ ⁠

“I was whispering my first words to him, welcoming him to the world and making some promises to him,” the new dad wrote on Instagram.

“To say that smell of him seeped into my brain and started to rewire things is an incredible understatement,” he added.

“We are now a few days in, and between feeds and nappy changes – whenever I can I’m whipping off my shirt and charging up this little guy like he’s an induction stove.

“I don’t know how long he’ll let me do it – but holy moly I feel the gears shifting between my eyes when we cuddle like this.”

Side note – Osher, you really need to stop making up games on The Bachelor. Post continues after video.

5. An appalling opening sketch and another Taylor Swift snub: Mamamia recaps the VMAs.

As I watched the MTV VMAs on Tuesday (recorded live on Monday night, Eastern Time in the US), there was one fact of which I was certain:

These people, while lovely, cannot possibly be famous.

It made for a confusing event, punctuated by impatient yells of 'wait, who is THAT,' as well as exchanges like:

Me: "Ooooh, does she sing that song that goes Havana, ooh na-na."

So to give you the goss, without the confusion, you can read the 6 things you missed from the 2019 MTV VMAs right over here.