1. There’s a rumour that Dr Chris Brown might be engaged and NO, IT CAN’T BE.

At Chris’ 41st birthday party last week, the pair were seen cuddling each other in photographs published by Woman’s Day.

But according to the publication this was no ordinary 41st birthday bash, no… apparently this was a double celebration, with Chris sharing news of his engagement to the 29-year-old host of The Loop.

“Their chemistry is undeniable, they are obviously one very happy couple,” a ‘bystander’ told Woman’s Day.

Chris’s co-stars from The Living Room, Amanda Keller and Miguel Maestre as well as The Project‘s Hamish Macdonald and Carrie Bickmore, all attended the party held at Sydney’s Clovelly Hotel.

And apparently some guests were happy to hear about the pair’s engagement.

“Amanda [Keller] was clearly very approving,” said the bystander. “She gave the couple a big hug.”

My favourite TV family, @livingroomtv … thanks for letting me pop in guys ????. . I might not have been on the couch for long… but as these photos suggest, I expressed a lot of different emotions in that time!

But before we start reaching for the tissues just yet, we mustn’t forget this isn’t the first time we’ve heard rumours the beloved Bondi Vet is getting married.

Earlier this year, Woman’s Day reported that despite Chris insisting he is single, the couple had married in Africa, in a “quite impulsive” decision while he was there filming I’m a Celebrity…Get Me Out Of Here!

But Liv was quick to shut down the rumours and told Sydney Confidential, “No, not married.”

This time around, neither Chris or Liv have confirmed or denied the news, so we all shouldn’t lose hope just yet.

2. “It will be next year.” Matty J opens up about his wedding plans to Laura Byrne.

They quickly became one of our favourite Bachie couples after they fell in love two years ago on season five of The Bachelor. And now, after having their daughter Marlie-Mae Rose Johnson three months ago, Matty J Johnson and Laura Byrne have started to talk about tying the knot.

“The wedding will be next year,” Matty told Now To Love.  “I think it’s probably going to be spring next year.”

“We’re still deciding whether or not it will be in the Central Coast or the South Coast or Byron Bay,” he said. “We can’t decide.”

I don’t know what ya’ll are yabbering on about. Tired is the look we were going for.

Matty told the publication that while wedding planning was a priority, the new parents have been busy adjusting to life with their three-month old baby.

“We’ve just been so busy that we’ve neglected to organise a venue – so it’s the number one thing to do on my list,” he said. “As of next week, I’m getting stuck into the planning of the wedding.”

But not only do we have a wedding to look forward, Matty also admitted they had plans to grow their family.

“As soon as the wedding is finished, we’re going to have a second baby!”

We know it’s still far off, but we are already excited at the prospect of  another bachie baby in the world.

3. ‘Joey has six kids.’ Friends co-creator shares exactly what the gang would be up to in 2019.

With the celebration of Friends 25th anniversary earlier this month (what?!), co-creator Marta Kauffman has revealed at the Tribeca TV Festival, just what she thinks the characters would be up to today.

And even though the cast are keen to do a reboot according to Jennifer Aniston, Kauffman has no plans of reviving the iconic program.

"There are two reasons for that, one of them... is this is a show about that time in your life when your friends are your family and once you start having family that changes, so it wouldn’t be what’s at the heart of the show anymore. But the other reason is, it’s not going to be what we did," she said.

Guess we'll have to use our imaginations for this one...

In case you missed it, Khloe Kardashian and Tristan Thomson's relationship came to an end earlier this year, as Tristan cheated on Khloe just before she was due to give birth to their shared child.

Lucky for us, their relationship breakdown was covered in great detail on Keeping Up with the Kardashians, and we know all too well that Khloe was not taking any of his excuses.

So, when Tristan commented a simple "perfection" with a heart-eye emoji on Khloe's recent Instagram post, fans were quick in jumping to her defense.

One user wrote back: "Just not perfect enough to be loyal to?"

Another wrote, "You gotta be kidding me, boy you something else!"

Sorry Tristan but if you're wanting Khloe back, you're going to have to get through her toughest fans first.

5. A year ago, Nick Cummins was the most hated man in Australia. This is his life now.

Has there ever been a more telling Instagram bio?

But then, that’s why a year ago thousands of people across Australia hated him. Because he told a reality TV show he wanted to settle down, get married, and have all of the children.

He even took 24 women away from their homes and jobs for three months in an effort to get as cornered and locked down and settled as one can possibly get.

So when he flew his final two – Brittany Hockley and Sophie Tieman – over to New Caledonia, dumped them both and fled into the jungle. It was… a lot. 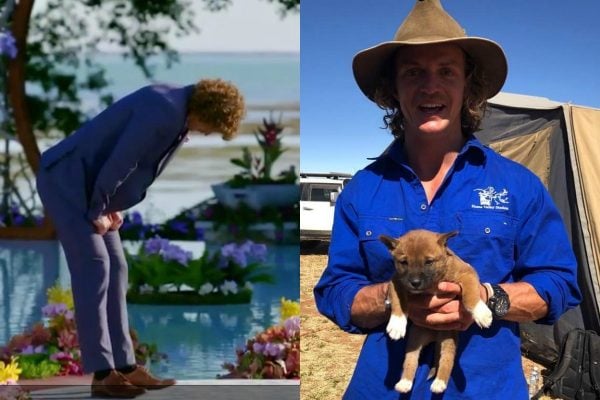 The question being directed at Cummins post-ghosting looked something like: "Why did he go on a show about finding love, if he he wasn't ready to find love?"

But as his final two devastated women digested the news, Australia's reaction as Cummins refused interviews and shied away from the public gaze evolved from confusion to anger.

Read our earlier article here to find out what the Honey Badger has been up to since.