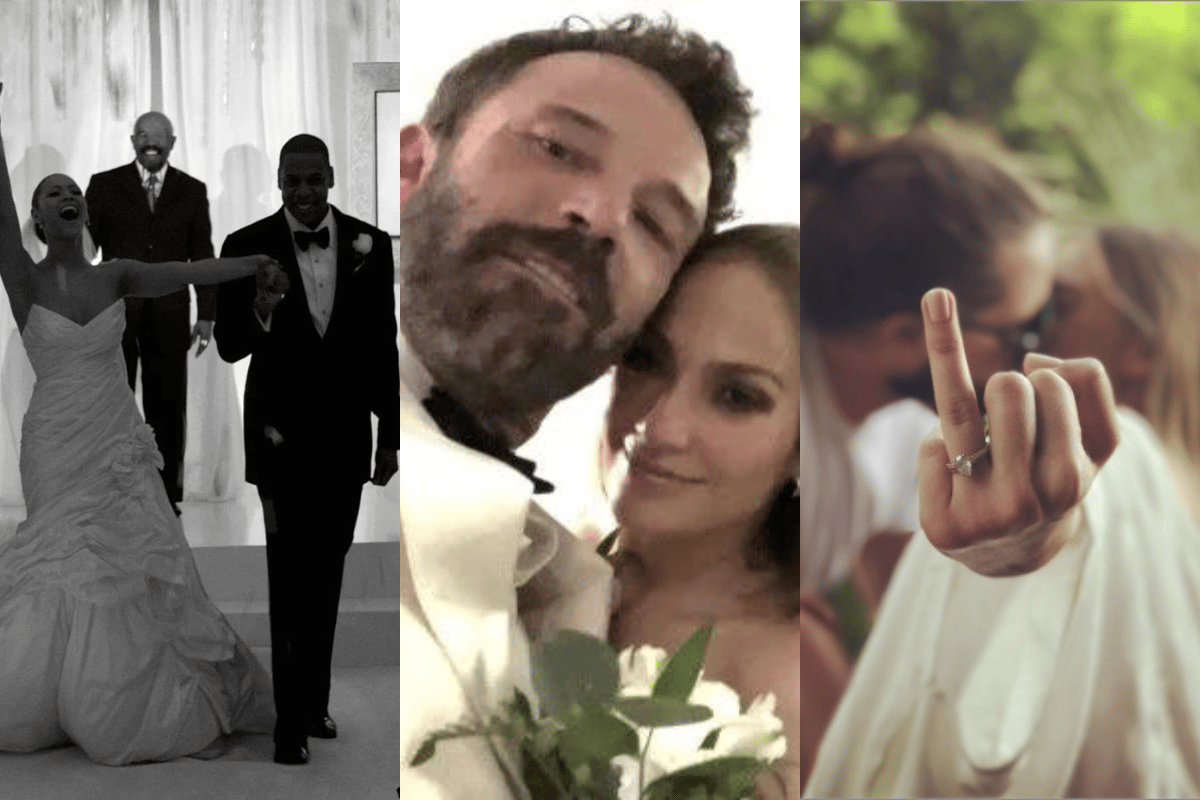 Do you hear that? It's the sound of bells ringing.

In 2022 we've seen quite a few celebrity couples tie the knot in smaller, intimate ceremonies, and it got us thinking about all the other A-listers who have chosen to keep their own nuptials on the down-low.

Of course, we've seen plenty of extravagant weddings – and many spontaneous ones as well – but we wanted to know all about the couples who might have been happy if the public hadn't known they tied the knot at all.

Watch: How much do Aussies spend on weddings? Post continues after video.

Below are six Hollywood couples who have all had low-key weddings. 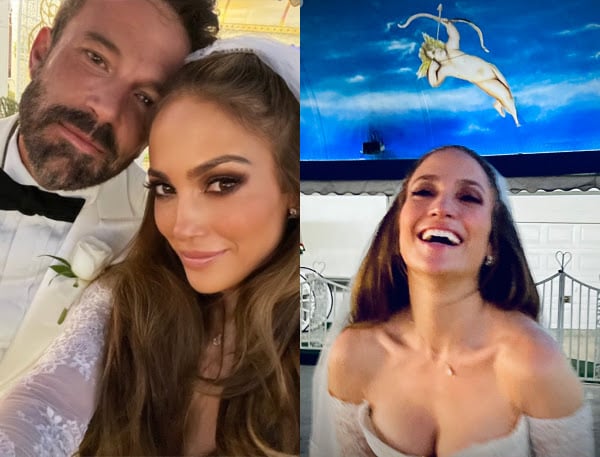 ICYMI, actors Jennifer Lopez and Ben Affleck broke the news this morning, when they announced they had tied the knot in Vegas. It was revealed through Lopez' newsletter, OnTheLo, in which she told fans: "Last night we flew to Vegas, stood in line for a license with four other couples, all making the same journey to the wedding capital of the world.

"Behind us two men held hands and held each other. In front of us, a young couple who made the three-hour drive from Victorville on their daughter’s second birthday — all of us wanting the same thing — for the world to recognise us as partners and to declare our love to the world through the ancient and nearly universal symbol of marriage."

The pair were together from 2002 before getting engaged a little later that year. While they ended up breaking it off in 2004, the actors reunited romantically late last year. 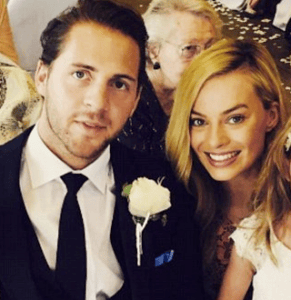 It is believed this photo of Margot Robbie and Tom Ackerley was one of just a few pictures taken in the lead up to their wedding. Image: Supplied.

Australia's very own A-lister Margot Robbie, and movie director Tom Ackerley managed to have a wedding that was utterly under wraps.

Back in 2016, the pair had wedding guests gather at a number of different locations (in the Gold Coast and Byron Bay), before being picked up on buses in order to reach the pair's secret wedding location.

Once at the location, guests' phones and cameras were taken away from them, and dozens of security guards patrolled the venue to keep unwanted paparazzi out. Unfortunately, images were still taken against their wishes.

Before Robbie deleted her Instagram for good, the actor only dropped in to show off her snazzy engagement ring. 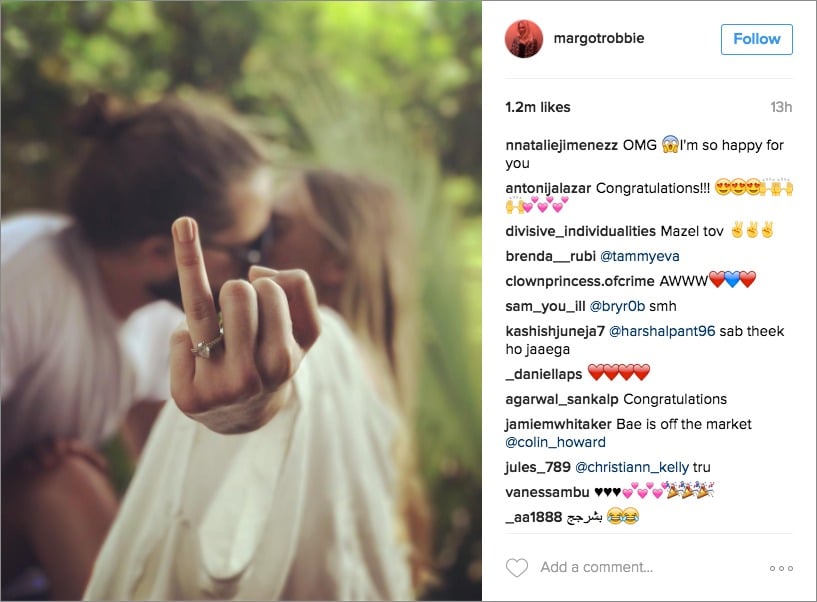 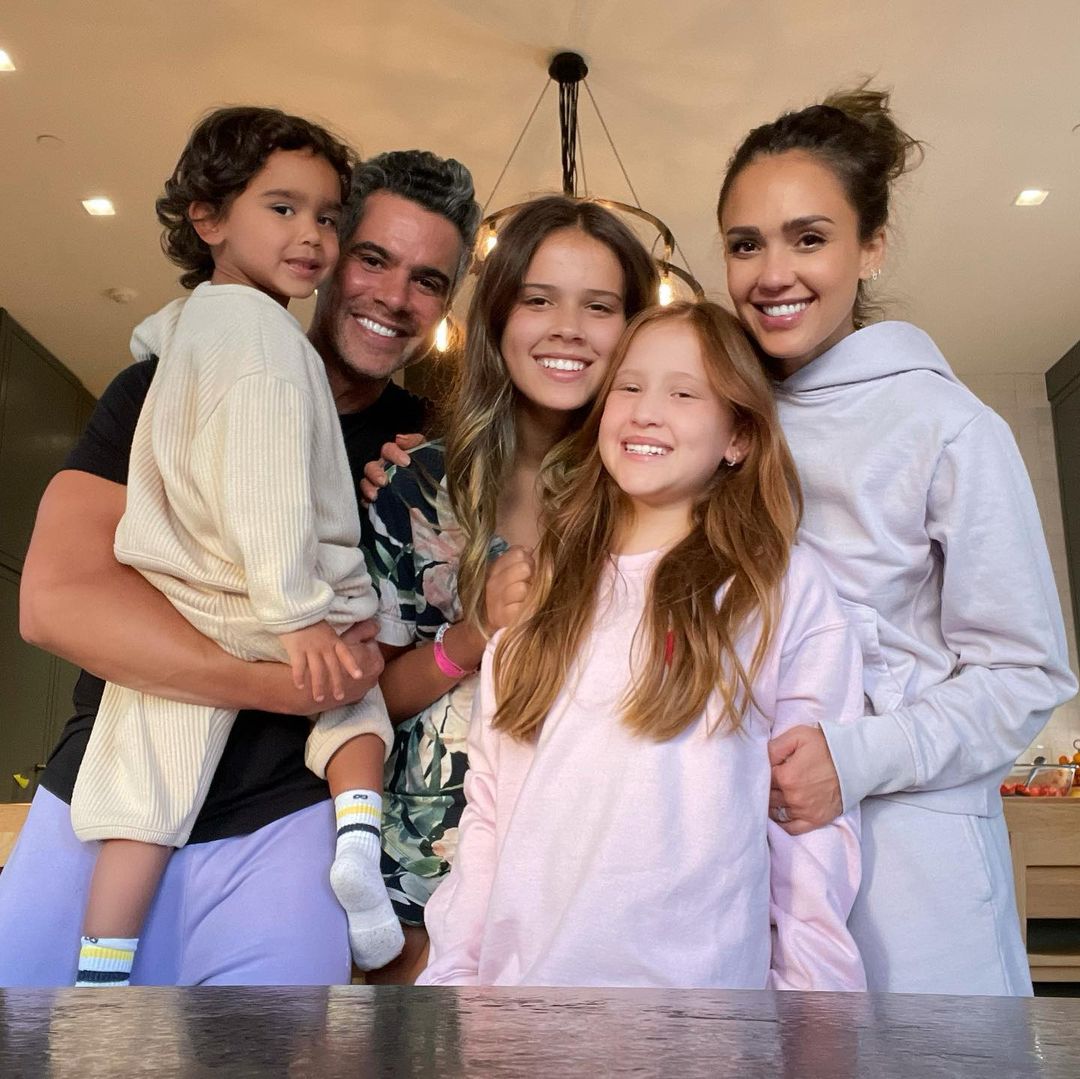 In 2008, Honey actor Jessica Alba married her producer boyfriend, wearing a simple maxi dress. Their ceremony was held at a Beverly Hills courthouse.

Interestingly enough, the pair never had any intentions of getting married. But when Alba was nine months pregnant with their first child, the couple made the random decision to drive to the courthouse and tie the knot. There were no paparazzi pictures.

It's been 12 years since Alba and Warren got married, and in that time, they've had three children together. 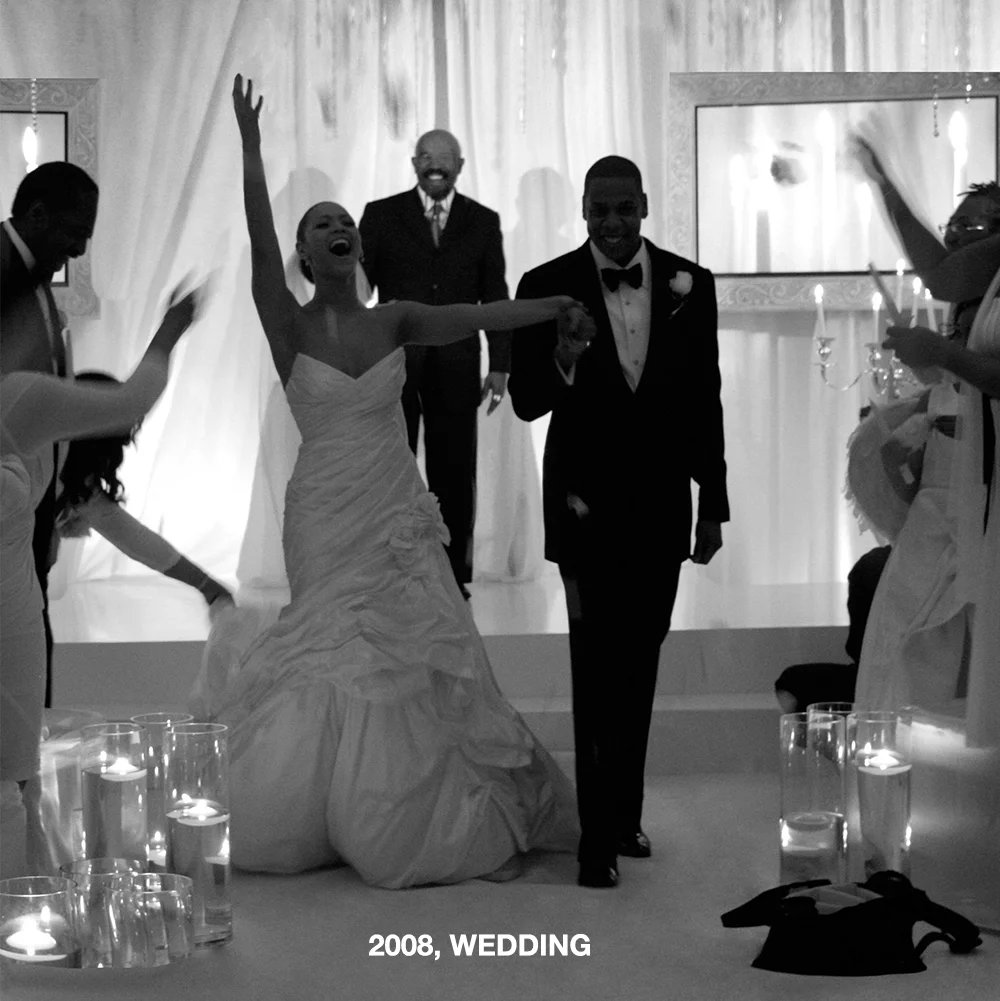 Beyoncé and Jay-Z are undoubtedly some of the most recognisable faces in the world, but when the pair got married in 2008, they opted for a wedding out of the public eye and tied the knot on the rooftop of their Tribeca apartment.

The singer and rapper married on the fourth day in the fourth month of the year in honour of their shared favourite number.

They've since welcomed three children together, including their now 10-year-old Blue Ivy and four-year-old twins Rumi and Sir. 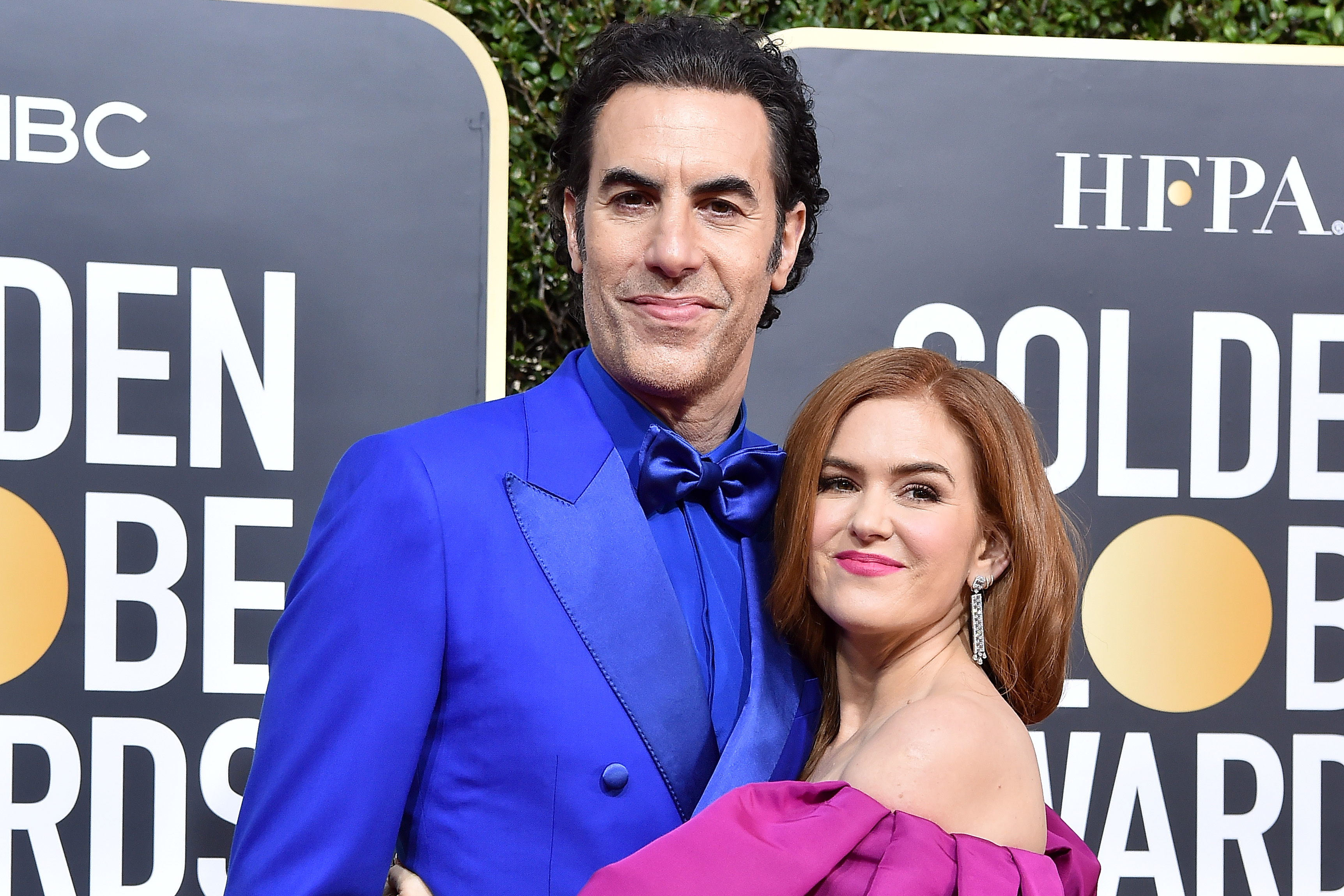 After meeting in 2001 at a "pretentious" party in Sydney, the pair chose to have an extremely small and private wedding nine years later, in Paris. Only six guests were in attendance and Cohen's father even had his father pretend to be a famous chef celebrating his birthday to ward off the paparazzi.

Photos have never been released of their special day.

In an interview, Fisher told Allure: "It [was] very important to me to have a beautiful ritual celebrated with my family and friends. And when you are in the public eye, to keep that private and to make it happen without it being really visible is really difficult."

Listen to The Spill's episode on Emily Ratajkowski. Post continues after audio.

Stranger Things actor David Harbour and singer Lily Allen married in 2020 at a Las Vegas Chapel. Media found out after PEOPLE confirmed the news by combing through court records. The couple later shared exclusive photos from the day.

An Elvis Presley impersonator officiated the ceremony and afterwards, the pair topped it off with a meal at In-N-Out.

"In a wedding officiated by the king himself, the people's princess wed her devoted, low-born, but kind credit card holder in a beautiful ceremony lit by the ashen skies courtesy of a burning state miles away in the midst of a global pandemic," Harbour wrote in his post.

"Refreshments were served at a small reception following."

The stars were first linked together in January 2019, and 10 months later, Allen was photographed wearing an engagement ring.