Tasmania’s Liberal Premier Peter Gutwein has announced he is quitting politics, less than a year after winning the state election.

Gutwein, who is also the state's Treasurer, indicated he wants to spend more time with family.

"I am announcing I'll be resigning as Premier and as member for Bass," he said at a press conference on Monday afternoon.

"First and foremost I want to thank my family for their support and love. No Premier does this job alone and my family has been outstanding in their support. It's been an honour and a privilege to serve as Tasmania's 46th Premier. However, the time is now right for me to move on and to attend to other things in my life.

"The past two years have delivered unforeseen challenges as we've navigated COVID-19. During this time I have quite rightly focused on everyone else's family. I now want to spend some time focusing on my own.

"What I've found after the last two years especially is I have nothing left in the tank to give," Gutwein said. "Unless you can give 110 per cent to the role of premier, you should not be doing this job. I can no longer give 110 per cent."

Gutwein, whose party was re-elected in May last year, said he will remain in the role of premier until the Liberals elect a new leader later this week.

Labor Opposition Leader Rebecca White thanked Gutwein for his service to the state.

"Mr Gutwein has governed through some of the most difficult times as Tasmania faced the scourge of COVID-19," she said in a statement. "I wish him and his family well for the future."

For more of tonight's news headlines, listen to Mamamia's news podcast The Quicky:

All the highlights from the Grammys.

The Grammys were on today and boy did they deliver.

This year’s awards were surrounded by controversy for months, mostly due to Kanye West. But this year's ceremony pretty much went off without a hitch - unlike the Oscars. However, there were still some big scenes, including plenty of Will Smith slap jokes…

Also making Grammys' news is the drama between P!nk and Rolling Stone. So ahead of the awards, Rolling Stone ranked their Top 25 Greatest Grammy Performances Of All Time.

P!nk didn’t make the cut. And she wasn’t happy about it. And to be fair, given the amount of times she’s performed at the Grammys - and the aerials she has done on stage - it’s warranted.

You can read the full rundown and see her blunt response here: “Give me a f**king break.” Why everyone is talking about P!nk and Rolling Stone magazine.

And last but definitely not least, is the fashion. We had inspiration from the ‘90s, lots of pink, a showstopper deconstructed jacket contraption and more.

To see the Grammys fashion gallery, visit this article: '90s vibes and pink... everything: All the Grammys 2022 red carpet looks. 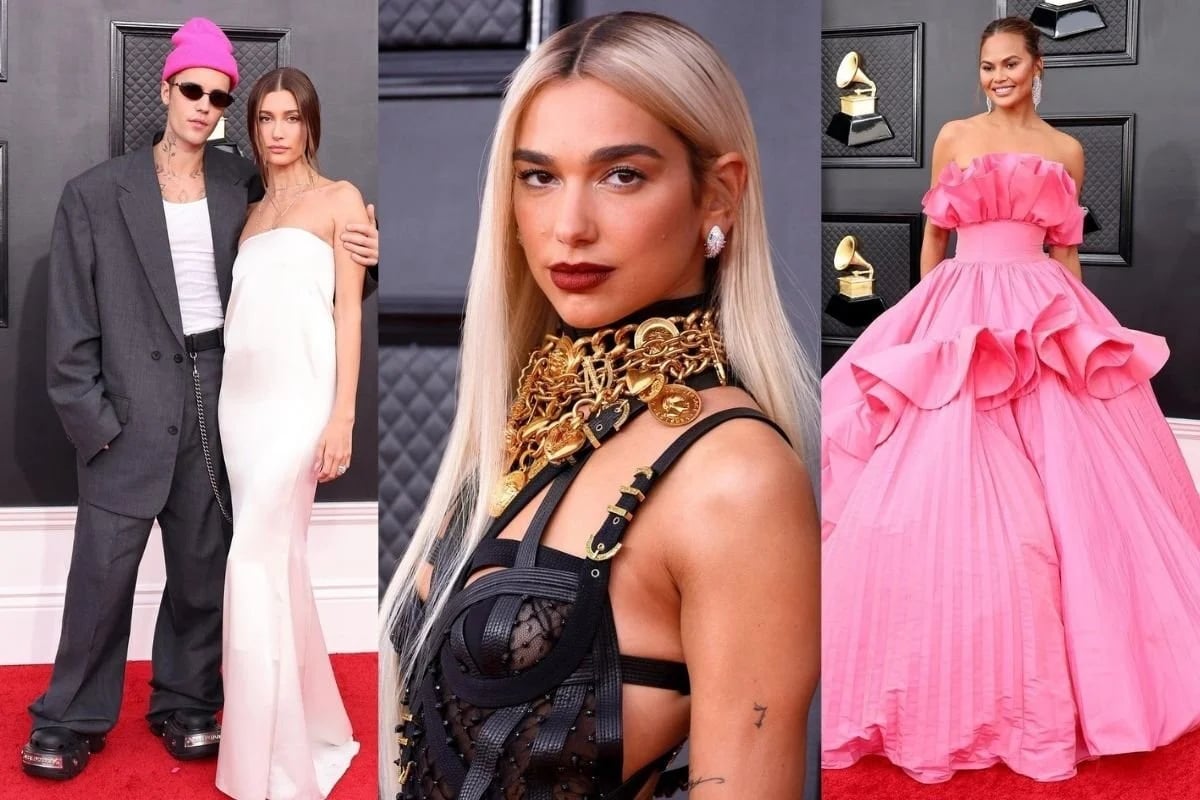 Reality TV star and actor Sam Frost has announced she is in a new relationship.

She went ‘Instagram-official’ with her new partner over the weekend, and he might be a familiar face to some: Survivor: Blood vs Water contestant Jordie Hansen.

He was a clear target for weeks, but somehow Jordie managed to survive in the game. #SurvivorAU https://t.co/9oxk3HFs22

The pair were on a weekend getaway trip together on the New South Wales’ south coast.

The former Home and Away actor, aged 32, and Jordie, 25, confirmed the news on Nova’s Fitzy and Wippa.

She said: “He’s friends with my brother,” referring to younger brother Alex, 26, who also appeared on Survivor: Blood vs Water.

Survivor star Jordie Hansen has been confirmed as former Home And Away favourite Sam Frost’s new love. To complicate matters, Frost’s former flame Jay Bruno was also in the latest season of Survivor.https://t.co/EuXlztSOgs

In the week following the infamous Oscars slap, things have gone from bad to worse for Will Smith, with a number of his upcoming movie roles now in jeopardy.

And Sophie Monk has announced she’s married via a gorgeous magazine spread and interview, explaining why she and her new husband decided to elope. But in the midst of her happy news, Australia seemed to sigh with relief and now we need to talk about why.

Plus, Camila Cabello has released an emotional statement on Instagram, talking about being stalked on the beach by paparazzi and unveiling everything celebrities have to do to avoid ‘bad’ images being released. A number of other celebrities jumped in to defend her, and it’s a sign that paparazzi beach culture is thriving more than ever before.

You can listen to today's episode of The Spill below!

Hundreds dead in Ukrainian "massacre", and all the news you need to know this morning.

Morning all, and welcome to your live news feed for Monday April 4.

We've got another big week of news ahead of us.

Today, you'll be hearing all about the 2022 Grammy Awards, and there's already drama going on behind the scenes.

Prime Minister Scott Morrison is also tipped to call the next federal election this week, so keep your eyes peeled for the date we'll be heading to the polls!

In the meantime, let's get you up to speed with the top five news stories you need to know this morning.

Ukraine is demanding new sanctions on Russia from major Western powers after hundreds were killed in a "massacre" in a town near Kyiv.

On Saturday, the mayor of Bucha, a liberated town 37 kilometres northwest of the capital, said that 300 of its residents had been killed by the Russian army.

US Secretary of State, Antony Blinken, described images of large numbers of dead Ukrainians in Bucha following Russia's withdrawal as a "punch in the gut" in an interview with CNN.

Andriy Sybiha, deputy head of the Ukrainian president's office, called alongside Kuleba, for a wave of new measures by the Group of Seven major Western economic powers, extending sanctions to all its banks, closing ports to its ships and imposing an embargo on all trade.

"The current sanctions are not having enough of an effect as the war is continuing," he said.

Russia's defence ministry denied that Russian forces had killed civilians in Bucha, and said all photographs and footage showing dead bodies were "yet another provocation". In a statement, it said all Russian military units had left the town on March 30.

Moscow has previously denied allegations that it has targeted civilians, and has rejected accusations of war crimes.

Prime Minister Scott Morrison has rejected claims he made a racist comment against an opponent during his 2007 preselection.

Outgoing Liberal senator Concetta Fierravanti-Wells last week made the accusations under parliamentary privilege, claiming Morrison told party members they couldn't have a Lebanese person as a candidate for the NSW seat of Cook.

Liberal senator Concetta Fierravanti-Wells has unloaded on Scott Morrison in an adjournment speech this evening in the senate.
Making claims of backstabbing and a racially motivated campaign from Morrison to prevent the preselection of rival Michael Towke. pic.twitter.com/cKmI7xQhPK

The prime minister denied the allegations again during a press conference on Sunday.

"These are quite malicious and bitter slurs, which are deeply offensive, and I reject them absolutely," he told reporters.

But shadow treasurer Jim Chalmers says nobody believes the prime minister on this issue or any other.

A second COVID-19 booster will be rolled out for vulnerable groups today, as more than half a million Aussies are dealing with infections.

Experts say a fourth jab will be critical in the effort to protect at-risk Australians ahead of winter, with a surge in cases of the virus and influenza looming.

People aged 65 and older, Indigenous Australians aged at least 50, disability care residents and the immunocompromised are among those receiving their fourth dose from today.

Older and vulnerable Australians will be able to receive a second booster shot from Monday, ahead of an expected surge in COVID-19 cases in winter. https://t.co/sj6YYnPrOm

An estimated 4.7 million people will be eligible to get a fourth dose, but it is expected fewer than 200,000 will meet requirements at the start of the rollout, with people able to receive a second booster shot four months after their first.

The number of active cases has climbed above the 500,000 mark for the first time since late-January, when the initial Omicron wave receded.

More than 47,000 new COVID-19 infections and 17 virus-related deaths were reported across the country on Sunday.

Communities across eastern Victoria are being urged to seek higher ground after heavy rain flooded rivers in the region, with more severe weather on the way.

The Bureau of Meteorology issued a severe weather warning for intense rainfall and damaging winds across East Gippsland on Sunday morning.

Major flood warnings are in place for the Snowy, Buchan, Bemm and Cann rivers after heavy rain also lashed the region on Saturday.

Residents around the Snowy are urged to move to higher ground with fears the river near Orbost could exceed above seven metres by this morning.

A low pressure system off the Gippsland Coast will bring heavy to intense rainfall, #flooding and damaging winds to East #Gippsland from this afternoon. 80-150mm of rain has been recorded in E. Gippsland since 9am Saturday, with a further 80-120mm to come.https://t.co/ie3YsJIqhl pic.twitter.com/bkneux8Jws

Across the border in NSW, evacuation orders remain in place for parts of Lismore and towns along the Richmond River including Bungawalbin and Woodburn.

5. Gunman on the run after six killed in California mass shooting.

Six people have been killed and 10n injured in an early morning shooting in downtown Sacramento, California, that took place in a busy nightlife district, police say.

Police are still looking for the shooter and no one is in custody, Sacramento Police Chief Kathy Lester told reporters on Sunday.

"We are asking for the public's help in helping us to identify the suspects in this and provide any information they can to help us solve this," Lester said.

The shooting occurred at about 2am local time near the Golden 1 Centre, an arena where the Sacramento Kings basketball team plays and concerts take place.

WARNING: Some viewers may find the following footage distressing.

A gunman is on the run this morning after a mass shooting left six people dead in the capital of California. @apiotrowski9 #9News

Police said several blocks were closed while they investigate, but released no details on the ages or identities of the victims.

You're all up to speed. We'll bring you more of the top news stories women are talking about throughout the day.

Bruce Willis: What it means to live with aphasia.

Last week, Bruce Willis' family released a statement that the Hollywood favourite is retiring from acting as he has been diagnosed with the medical condition aphasia.

But what exactly is aphasia, and what does it mean for the everyday lives of more than 140,000 Aussies who also live with this condition?

The Quicky speaks to an expert in speech and language, and a woman who acquiredaphasia after having a stroke at the age of 33 to find out what it is, how it impacts your body, and the available treatment options helping those people to continue with their lives.