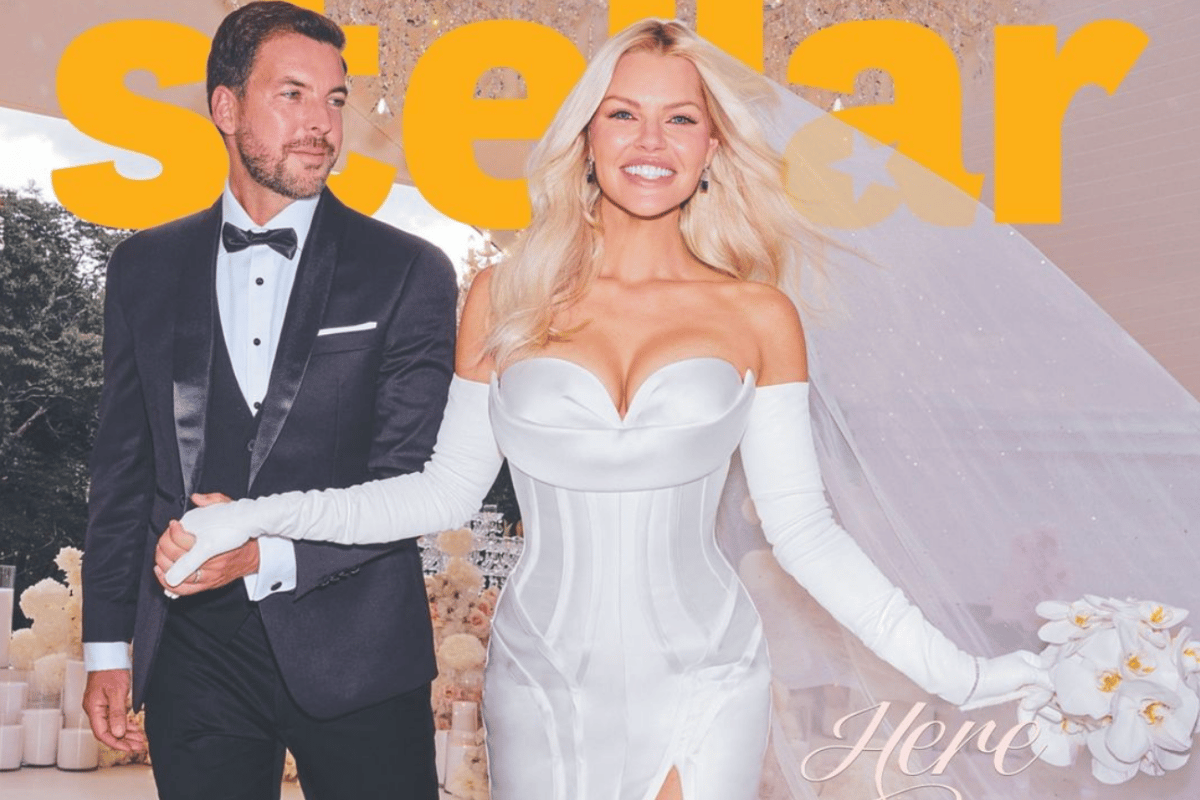 And intimate it was, as the couple were the only ones in attendance. Deciding to privately elope, Monk and Gross married at their home on the Central Coast in NSW.

Gross, a neurosurgical robotics consultant, said the wedding took about three weeks to organise, captioning an Instagram post: "Sophie, I love you. Now and forever."

Monk said: "I HAVE A HUBBY! We eloped-ish at home. I can't believe I met him on a plane! It's crazy. Best flight of my life! I really do believe everything happens for a reason. I love you Joshua Gross. Thanks for putting up with how messy, disorganised and lazy I am.

"You're my best friend in the world and you are welcome for how hilarious my jokes are and how I absolutely smash you in Xbox F1! We're both lucky."

The couple were able to plan their wedding with DK Weddings and Events, which took a lot of the admin stress away.

As for the rest of the stunning decor, it was an impressive lead-up. The flowers were by Montana Flora, with the couple opting for a white and pale pink colour scheme including roses and orchids. The decor pieces and custom builds were courtesy of White Label Hire. Plus the chandeliers and candles were by StarLight Chandeliers and LOVED BY LUCY.

And photography was done by the talented Steven Chee.

Speaking to Stellar Magazine about the big day, Gross said: "We've had a really lovely day together. It's been a dream. When I'm with her, it's just smooth. I couldn't be happier."

Monk noted: "It has been so beautiful and relaxed. We didn't know what the day was going to look like because we rushed it, and it has superseded our expectations. I got so nervous when he was about to walk in and see me in my wedding dress. It was really unexpected."

As for Monk's stunning wedding dresses, she decided to opt for two: because why not! Both were custom pieces by J'Aton Couture. And in true Sophie Monk style, she gave the designers two weeks' notice and tried the dresses on for the first time on her wedding day: and luckily, all was a success.

Both dresses were two very different looks - one a fitted ivory gown with a sweetheart neckline, a leg split, long train and a corset-structured top, the second a sparkly opaque dress with another fun leg split.

"It fit like a glove, it was perfect - it was just how I'd imagined it. I wanted something timeless where it doesn't age badly," she said to Stellar.

As for how Gross reacted when he saw Monk in her dress for the first time, he said: "That reveal was just something I couldn't have even anticipated. I started crying as soon as I saw her, which I didn't plan on at all. But yeah, it hit me hard. It really did."

Monk shared: "When Josh walked in and cried, it just made me cry because I love him so much, and I was like, 'Oh I can't cry, my eyes, my make up - we have to get the photo. It was almost like when I first met him on the aeroplane. It reminded me of all that. It was just beautiful. And I could see he loved me in his eyes. I'm so lucky."

Their golden retriever dog Bluey also made a fabulous appearance in their wedding photos.

Speaking on the fact the couple had no guests at the wedding, Monk elaborated: "I've told a few close family and friends. I'm 42, so I feel like they're like, OK, do it your way. We figured, if you don't invite one person, then no one could get upset. We know everyone will be happy for us if it's just the two of us."

Interestingly, Monk's wish to elope was readily discussed in an interview with Mamamia late last year.

"We're going to try to do it just him and I. We kind of just want it to be intimate," she said to Mamamia.

"And it's kind of always a bit about me - I'm always getting dressed up for stuff. So, I should just make it about him and I and organise a dress, have a really nice night, and get married by ourselves. Just do by ourselves and get a nice photo because that's all you kind of remember with weddings, anyway. You look back at photos and go, 'I didn't even talk to that person'."

Listen to Sophie Monk on Mamamia's No Filter podcast. Post continues after audio.

As for what the future holds for the couple, they said to Stellar that they plan on going with the flow and not putting any pressure on themselves.

"I mean, of course, you'd love to start a family if it happens. Whatever life throws at us, we're going to be there together. And whether that's family, travel… We're 100 per cent in."

In January 2021, Monk and Gross announced their engagement.

"I'm engaged," Monk shared on Instagram. "I honestly can’t thank you enough for all the love and support. I know I have the coolest people following me and you’ve always had my back and I feel so cared about. You’re absolute bloody legends."

She continued: "I'm not very good at being mushy. I'm trying to say I absolutely adore you. Joshua and I are so happy."

Gross also shared the news on his own Instagram page, writing: "Luckiest guy in the world."

Sharing how Gross proposed on Christmas Day at home while enjoying a cup of coffee, Monk reflected: "He knelt down, and I just said yes before he even asked. He's like, 'Hang on, I've got stuff to say!' And I'm just like, 'It's good, yes!' And then I cried."

Gross told Stellar he was "a little heartbroken" when he saw paparazzi photos of him leaving a jeweller a month prior to the engagement, which spoiled the surprise.

"I'd gone through six months of cloak-and-dagger secrecy to get this done without Sophie knowing because I wanted her to have a good surprise. Everything is so public for her, I thought this is one thing we can have behind closed doors. So that was a little heartbreaking. I was planning on proposing a little earlier and (the media attention) sort of paused things for a while."

"I had just finished filming Love Island in Mallorca and was on my way to San Francisco for a random TV gig with Channel Nine when I made a last-minute decision to go back to Australia," Monk told the Sydney Morning Herald.

When asked how she knew Gross was the one for her, Monk said it was because he was so different compared to her previous partners.

"I wasn't comfortable with myself and would choose people who weren't right for me," she said to TV Week. "When you don't feel good about yourself, you attract the wrong thing or you look for somebody to fulfil you. But you need to meet someone who's a bonus to you, not someone to fix you. That took me ages [to realise]."

She summed up: "Sometimes it can make you feel lonely because you're doing it by yourself and there isn't someone to share it with. It's nice to have that. He's perfect."

Reply
Upvote
I've always had a soft spot for Sophie and I'm glad she's found her One and Only. She looked gorgeous in her wedding dress and I'm really happy for her and Joshua,   but PLEASE do not make it sound as though there were only the celebrant and the couple there. If that were the case, then they are definitely not legally married. You must have two witnesses at any wedding who will hear the couple exchange their vows and sign the legal documents afterwards. Perhaps they had the photographer and another service person perform as their witnesses, but this isn't made clear. Some people might think it's okay to get married without any witnesses and it's not. I've had my fair share of couples who get stroppy when I tell them that what they say they want isn't legal just because they "saw it on TV" or "read about it in a magazine".