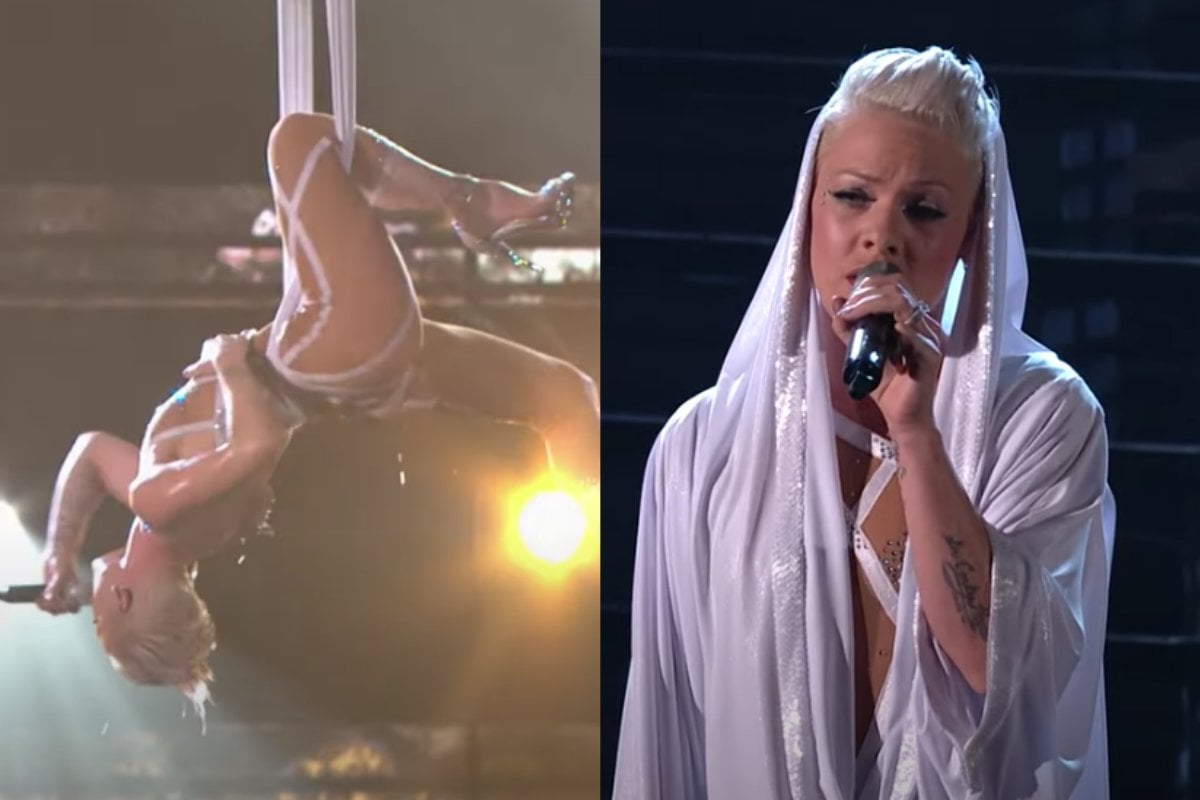 And no, that doesn't mean she's had one too many wines. She's angry, and she's letting everyone know about it.

In case you missed it, P!nk has come out swinging - with words only, no slapping is involved - against music magazine powerhouse Rolling Stone after the publication ranked their Top 25 Greatest Grammy Performances Of All Time, in honour of the Grammy Awards being held today.

As you can probably guess, P!nk is not on the list.

For the record, P!nk has performed at the Grammys a number of times, including 2010, 2014, 2017, and 2021. Here she is in her debut Grammy Awards performance in 2010, dangling in a white sheet suspended above mid-air in front of millions of viewers, singing in perfect pitch.

In her comment on Rolling Stone's Instagram post, P!nk wrote a lengthy reply: "Bahahahaha you guys have been irrelevant since 1990. This is the magazine that used to feature people like John Lennon and Muddy Waters. Hunter S Thompson wrote political pieces - they put Tina Turner on their cover.

"Then they sold out and all credibility went to s**t when ‘style over substance’ and ‘revenue over authenticity’ went into play. That’s when Snooki became acceptable coverage.

"Give me a f**king break. Do your homework. You don’t have to like me or my music or anything about me - and believe me I could give a s**t - but this is the biggest sellout in f**king history when it comes to a publication we all once trusted.

"F**k Rolling Stone. And I’ve felt that way for decades as so many of my favorite artists and my peers have. This isn’t just about their horrendous opinion of ‘rating Grammy performances’. It’s decades of wasting trees and people’s time."

Tell us what you really think, P!nk.

In news that will surprise absolutely no one, the Internet is divided about this whole situation. There are those who are firmly with Team P!nk.

Let’s be honest, @Pink is 100% right about the integrity of @RollingStone. It has become one of the most biased pieces of rubbish in the media circus.

this is what i love. she knows about music, the history of music because she loves it and forms her own opinions regardless of the “popularity” of a magazine. rolling stone used to be the coolest magazine around, long before i was alive. it’s a shame. @Pink pic.twitter.com/mepda1Yin1

@Pink 's performance of #GlitterInTheAir at the 2010 Grammy should've been on that Rolling Stone list. That performance is pure perfection. Not only she was singing live but also she was hanging from the ceiling while water was dripping from her whole body... Amazing performer

And then there are those firmly with Team P!nk, but for some reason are really p!ssed at Taylor Swift.

Why is everyone coming for Taylor? You guys MISSED the point. This post is about Pink calling out Rolling Stone, Taylor is simply just one of many names on the list

Taylor can barely sing and where is Pink?

So far there doesn't seem to be much criticism of P!nk (she should be on this very subjective list, everyone!) or why she really cares at all about the magazine's ranking considering, in her own words, they've been irrelevant since 1990.

Our suggestion to Rolling Stone is that they should revise that list, pronto.

Also, spare a thought today for reality TV star, Snooki. She needs a lot of aloe vera after that burn.