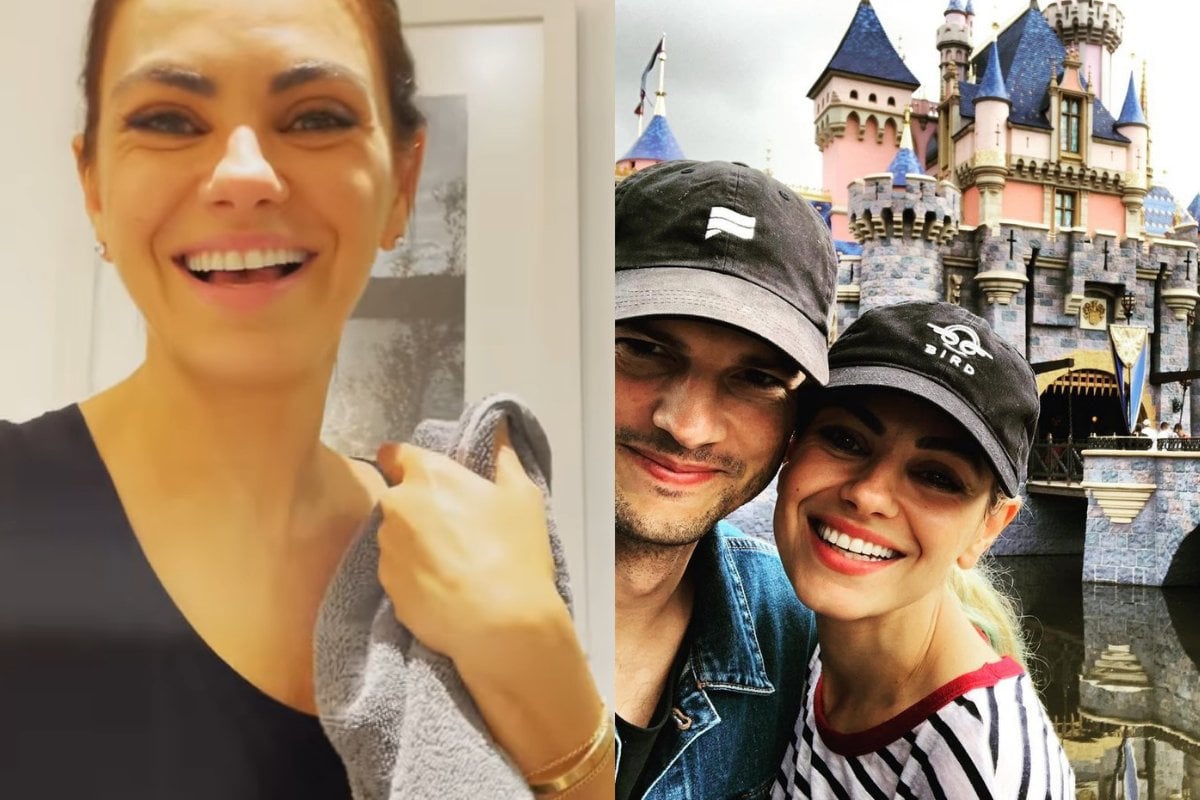 Ashton Kutcher and Mila Kunis are one of Hollywood’s most notoriously private couples.

The actors have been married for six years and have two young children together. Yet, they’re rarely photographed together.

WATCH: Here are some of the celebrity couples we didn’t know existed! Post continues after video.

That said, their relationship story reads like a plot line straight from a movie. Specifically, their movies No Strings Attached and Friends With Benefits.

From meeting as teenagers and having their first kiss televised, to the relationship breakups that led them to each other, keep scrolling for a deep dive into Ashton Kutcher and Mila Kunis’ ultra private relationship.

Like most celebrity couples, Kutcher and Kunis (which sounds like it should be the name of their own show) met at work on the 1998 TV series That 70s Show.

Their characters Jackie Burkhart and Michael Kelso were an on-screen couple – as Kutcher said in a 2017 interview on The Howard Stern Show, their “first kiss was memorialised on a TV show”. (You can watch the very scene below.)

Both have always said there was nothing going on between them while they were working together.

“I say this not as a joke, but [he] literally did my chemistry homework. I thought he was fine, he was a nice guy, we worked together and sometimes he’d drop me off at home,” Kunis, 37, told NBC’s Sunday Sitdown With Willie Geist in 2018.

“It wasn’t until years later at an awards show I saw him again. He just turned around and it was literally like if we were in a movie, the music would’ve started playing and the violins would’ve gone. I think for the first time ever he took my breath away — I was like f**k, he’s good-looking.”

“It was really weird. I was like, ‘Isn’t this illegal? Like can I — am I allowed? It was really awkward because I’m like a 19-year-old kid. She was like my little sister. I wanted to make sure she was OK.”

After That 70s Show, Kutcher and Kunis went their separate ways, but stayed in touch online throughout their twenties.

A then-18-year-old Kunis started dating Home Alone child star Macauley Culkin, who was 21 at the time. They dated for eight years, and managed to keep their relationship private from the media.

In interviews, Kunis has said they “grew up together,” but that their 2011 breakup was her fault, despite both their reps saying it was amicable.

“It was a horrible, horrible breakup… I f**ked up," she told Dax Shephard on his Armchair Expert podcast in 2018.

“It’s f*cked up what I did and it’s f*cked up how I did it. When I got to be a single I said, ‘I just need to figure myself out.’ I genuinely need to know why I did what I did, and, like, regroup myself as a human being.”

Meanwhile, Ashton Kutcher dated the likes of Mad Men actress January Jones in 1998 and the late-actress Brittany Murphy briefly in 2003.

He also was meant to have a first date to a post-Grammy after party with a woman named Ashley Ellerin in February, 2001. However, he was running late, and when he got to her place, she didn’t answer the door.

“I figured I had screwed up – I had showed up too late,” Ashton later said. In fact, Ellerin had been murdered that night by the “Hollywood Ripper”, Michael Gargiulo.

Then, in 2003, Kutcher met Hollywood actress Demi Moore. He was 25, and she was 40, and the mother of three daughters with ex-husband Bruce Willis. The oldest, Rumer, was just 10 years younger than Kutcher.

They married in a kabbalah ceremony in 2005, with Willis among the guests. During their six-year marriage, Moore and Kutcher fell pregnant before miscarrying. In Moore’s recent memoir, she opened up about their somewhat toxic relationship.

“When he expressed his fantasy of bringing a third person into our bed, I didn’t say no. I wanted to show him how great and fun I could be," she wrote on their alleged threesomes.

In 2011, Moore announced she was ending the marriage, following allegations that Kutcher had been unfaithful. Kutcher filed for divorce in 2012, and has remained tight-lipped on the details of their breakup ever since. In 2013, he told Elle, "There are some things that are better left private".

From 'just hooking up' to their secret wedding.

The story of how Kutcher and Kunis finally got together is one they've both told the media many times.

Both had just finished working on two films that were basically the same movie - he, No Strings Attached with Natalie Portman, and she, Friends With Benefits with Justin Timberlake.

Both movies were released in 2011 and centred on plot lines involving casual sex between friends that turns into something more. So, they decided to live out their fictional characters.

"We lived our movies out. We were like, let's just hook up. Let's have fun. We're both single. We both trust each other. Everything's great," Kunis told The Late Late Show With James Corden.

"Just like our movies, one of us caught feelings. We were both seeing other people, so the second I started caring that he was seeing somebody else in that regard, I felt like I got punched in the gut, literally overnight."

The story goes, she then tried to break things off with Kutcher three months into their fling after realising she was "in love" with him. The next day, Kutcher showed up at her house and asked her to move in with him.

From there, things moved pretty quickly. So quickly, Kunis has been quoted as saying: "Six months later we're, like, married and had a kid."

In 2014, the couple welcomed their first child, daughter Wyatt. The following year, Kutcher and Kunis married in a secret ceremony on a ranch outside of LA. Kutcher told Ellen DeGeneres they used social media to keep paparazzi from finding their location.

"I was, like, posting things on social media that were in different locations because we didn't want to be screaming our vows at each other and be like, 'Forever! Did you say never?' We didn't want to do that thing, so we went really under the radar with it."

Kunis also spoke about the wedding with W Magazine in 2014, saying: “I never wanted to get married. From the age of 12, I prepared my parents for no marriage. Then things changed — I found the love of my life. Now my theory on weddings is: Don’t invite anyone. Do it privately and secretly. My parents are OK with that.”

The couple are fairly private when it comes to their relationship - Kunis doesn't have Instagram, and Kutcher posts wholesome photos sporadically on his. They're rarely photographed together, except at basketball games and on the occasional red carpet.

"You know, I've learned the hard way how valuable privacy is," he told Elle of their decision to maintain their privacy.

"And I've learned that there are a lot of things in your life that really benefit from being private. And relationships are one of them. And I am going to do everything in my power to have this relationship be private."

Kunis and Kutcher have two kids together, six-year-old Wyatt Isabelle and their four-year-old son Dimitri, who was born in 2016.

Earlier this year in an interview on Armchair Expert podcast with Dax Shepard, the couple shared that they don't bathe their kids every day.

"When I had children, I also didn’t wash them every day," said Kunis. "I wasn’t that parent that bathed my newborns – ever."

Kucher added, "Now, here’s the thing. If you can see the dirt on them, clean them. Otherwise, there’s no point."

The pair also said they don’t wash their own bodies with soap every day.

"I didn’t have hot water growing up as a child so I didn’t shower very much anyway," Kunis explained.

"I wash my armpits and my crotch daily, and nothing else ever," added Kutcher.

"I do have a tendency to throw some water on my face after a workout to get all the salts out."

Of the kind of parents they are, Kunis has previously said she and Kutcher are quite goofy with their kids.

As for what makes them such a great couple, she believes "it truly is all about being able to be honest." And laughter.

"I will say he makes me laugh every day. Sixty years from now, when we're in our rocking chairs and I'm wearing a muumuu, I hope he's still around and I'm still giggling, because the greatest gift you can give is making each other laugh."

When asked about their parenting fails, Kunis told Ellen DeGeneres' Mom Confessions web series she told her oldest, Wyatt Isabelle, to 'push back' when shoved in the playground, and say "no thank you".

"There was a little kid in my kid's preschool that wasn't very kind and pushed my daughter," she explained. "My daughter came back and was like, 'Such and such little kiddo pushed me.' And I instinctually said, 'Did you push her back?' And my daughter's like, 'No!' "

Kunis went on to explain the memory of "seeing Ashton's face and he's like, 'No!'"

"You stand up for yourself and say no thank you," she recalled telling her oldest child. "Don't push her off of a ladder, off of a swing or off of a slide, but on the ground, Even Steven, you push her back."

"I'd say that that's a parenting fail."

Reply
Upvote
1 upvotes
One of the mysteries of the universe is whenever a couple is known as 'notoriously private' their past, dating back over 2 decades will be examined in minute detail.
I'm pretty sure celebrities do it intentionally as some sort of reverse psychology to get even more attention ;o)

Reply
Upvote
1 upvotes
@random dude why are they always "notoriously" private? It makes them sound so suspicious, like they're up to something.
G
gu3st 6 months ago