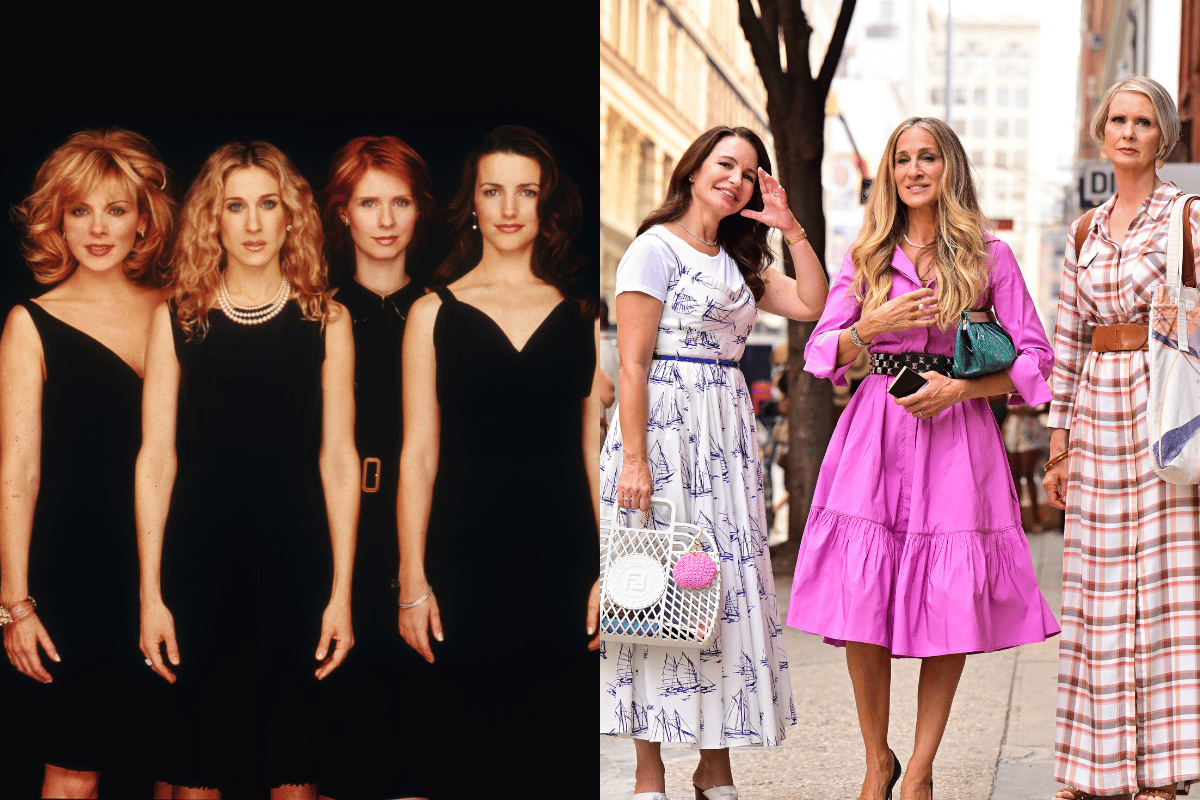 The much-anticipated Sex And The City reboot has come and gone.

And Just Like That brought Carrie, Miranda, and Charlotte (yes, no Samantha!) back to our screens, and this time we got to see the characters navigate life in Manhattan in their 50s.

But, as all the best shows do, there's a whole lot of behind-the-scenes gossip we need to unpack now, thank you very much.

From a brand-spanking-new on-set feud to faked scenes, we've got a lot to discuss.

And it goes without saying: spoilers ahead.

In episode four of And Just Like That, Carrie received an unexpected letter from Stanford Blatch, explaining that he was moving to Tokyo to manage a TikTok star.

According to his husband, Anthony (Mario Cantone), Stanford couldn't bring himself to tell her the news in person as she was mourning the death of Big.

Anthony also received a letter, with Stanford writing that he wants a divorce.

But as the series showrunner, Michael Patrick King, has now explained, there was a bigger storyline planned for Stanford, if it wasn't for the actor, Willie Garson's passing. 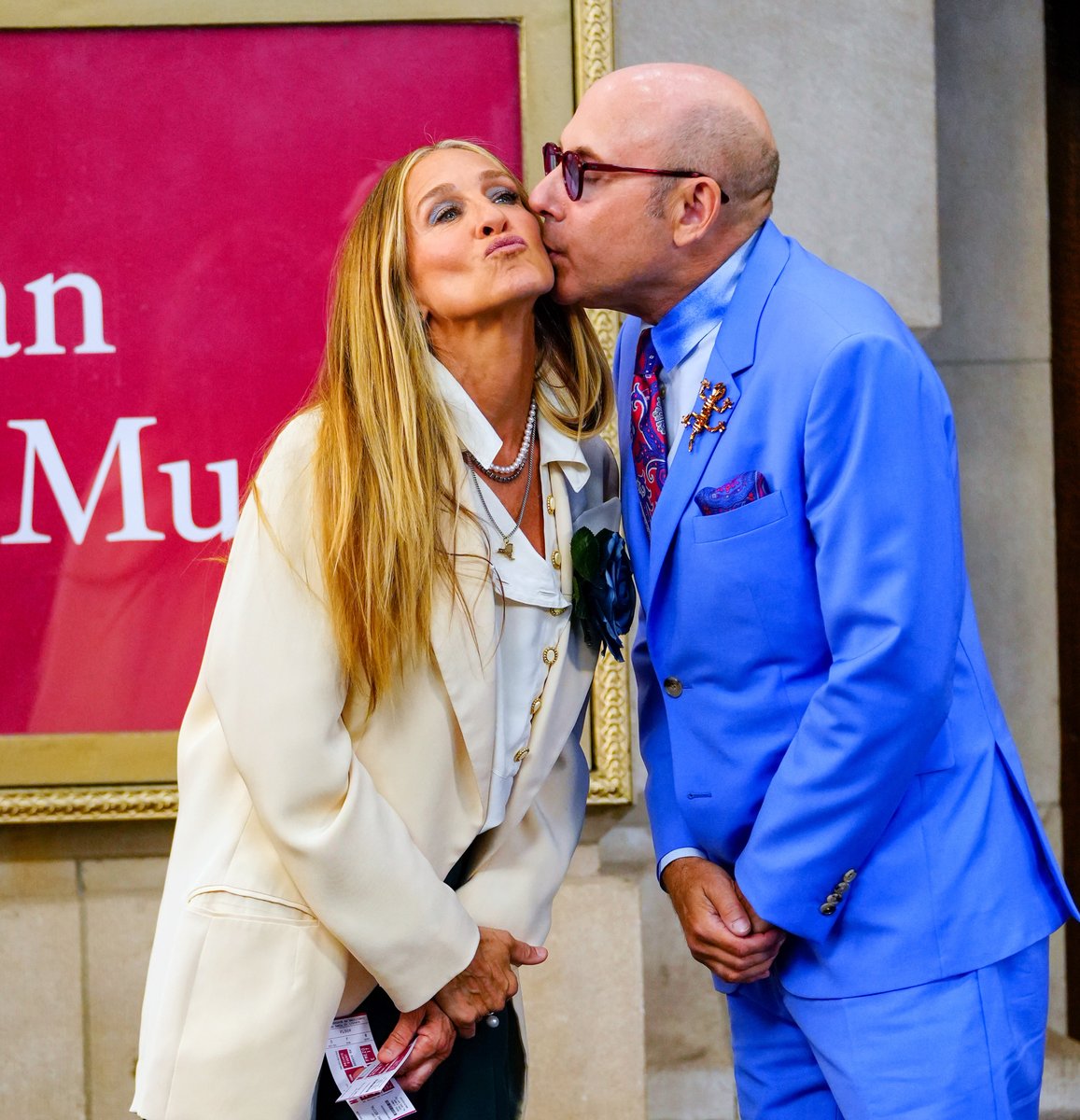 Sarah Jessica Parker and Willie Garson on the set of And Just Like That in New York City. Image: Getty.

"Before I knew that Willie was sick and couldn't complete it, Stanford was going to have a midlife crisis," he said, saying that the character would've been in all 10 episodes.

"Stanford's character always had a borderline career as a manager, and we were going to explore the fact that it wasn't a real career. It was going to be Carrie and him, feeling the shifts."

King admitted that Anthony and Stanford would've probably split, regardless.

"Everybody would be relieved that they were divorced," he said.

Their divorce would be the catalyst for Carrie and Stanford becoming close again, like they were pre-Big.

"There was a series of really fun, flirty, hilarious confidante scenes with Carrie that I loved," King said.

"That old, old, very specific chemistry that Carrie and Stanford have, which is based totally on the uniqueness of Willie and Sarah Jessica's history."

King added that he couldn't bear the thought of killing Stanford off in the show, especially after Big's death in episode one.

"It's the most threadbare writing I've ever done just to move him along without much maneuvering, because it was just so sad," he explained.

"There was no way I could write myself out of that in any charming, cute way."

Writers address the treatment of Steve.

Two writers of AJLK have addressed the "poor" treatment of Steve Brady and defended the progression of his storyline.

Julie Rottenberg and Elisa Zuritsky (who also wrote the original Sex And The City), denied claims Steve was being attacked this season.

"Everyone on the show, every single person, loves David Eigenberg as a human being. We love him as an actor. We love Steve. We are really invested in the Steve-ness of him. He’s so full of life, and the Steves out there are good guys," Zuritsky told  Vanity Fair.

Rottenberg went on to say Miranda's personal journey is one many women go through in their later years.

"Miranda’s journey is representing another reality out there, which a lot of people go through — the reevaluations and transitions in life," they said.

"Grown couples grow apart, and people come to epiphanies about what their spouse is or isn’t fulfilling for them. Miranda’s story was very representative of a certain path that a lot of women find themselves on."

Charlotte has long been "repulsed by" her innate sexual desire for her husband Harry, so the writers decided to give him a... very large member.

"I decided, many people agreed with me, that he would have a substantial penis," showrunner Michael Patrick King explained on The Writers Room podcast.

He added: "And not that your sex life is dependent on your penis size. But when you're going to show his penis, let's make it be something that's a nice size.'

It's been confirmed it was not actually actor Evan Handler's penis, but a prosthetic one.

"It wasn't enough for us to have it happen like in other TV shows where you never see the dick," King said.

By now, we should all be very familiar with a particular feud that went down between Sarah Jessica Parker and Kim Cattrall that meant there would be no Samantha in this 2021 reboot.

But as it so happens, it might not be the only feud in the SATC franchise.

“A friend who was an extra on And Just Like That told me that Cynthia Nixon and Nicole Ari Parker did not get along well during filming,” the anonymous account wrote. 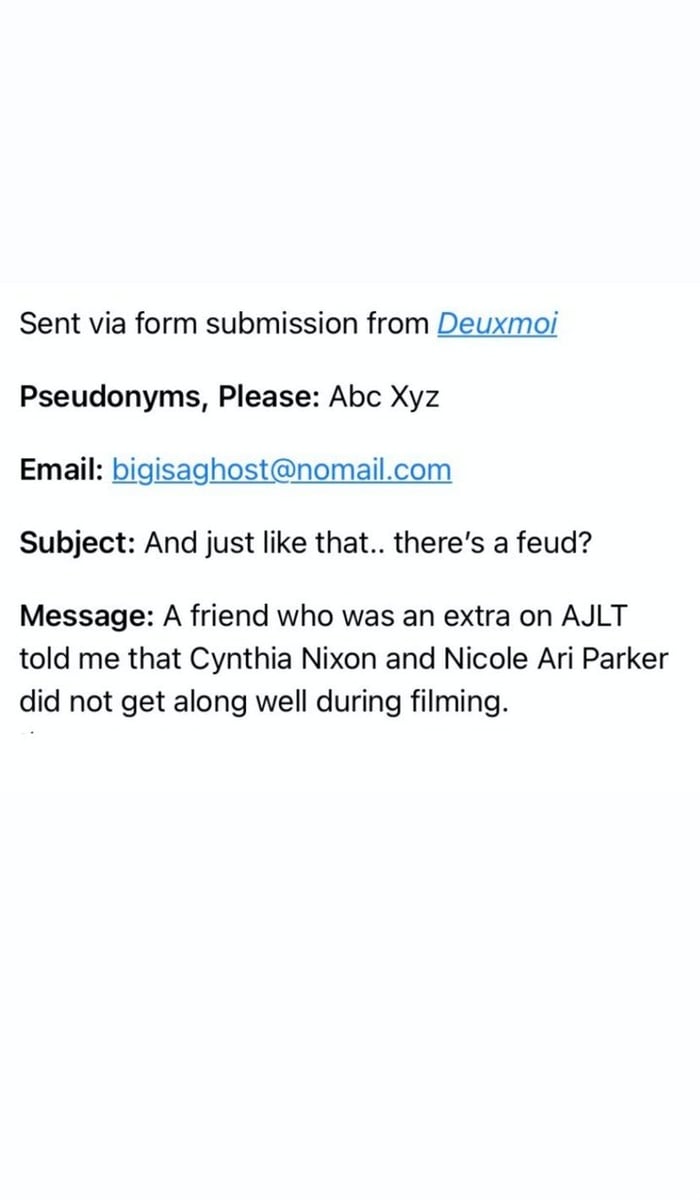 Is there the remotest bit of verification on this one? No. But what's a little more goss, right?

Sarah Jessica Parker is not so keen for Samantha to return to AJLT.

SJP sat down for an interview with Variety where she made it clear that Kim Cattrall's return is off the cards - for her, that is...

When asked if she would feel comfortable with Cattrall getting some screen time in the next season of And Just Like That, Parker's answer was brutally honest.

“I don’t think I would, because I think there’s just too much public history of feelings on her part that she’s shared,” the actor shared.

“I haven’t participated in or read articles, although people are inclined to let me know.” 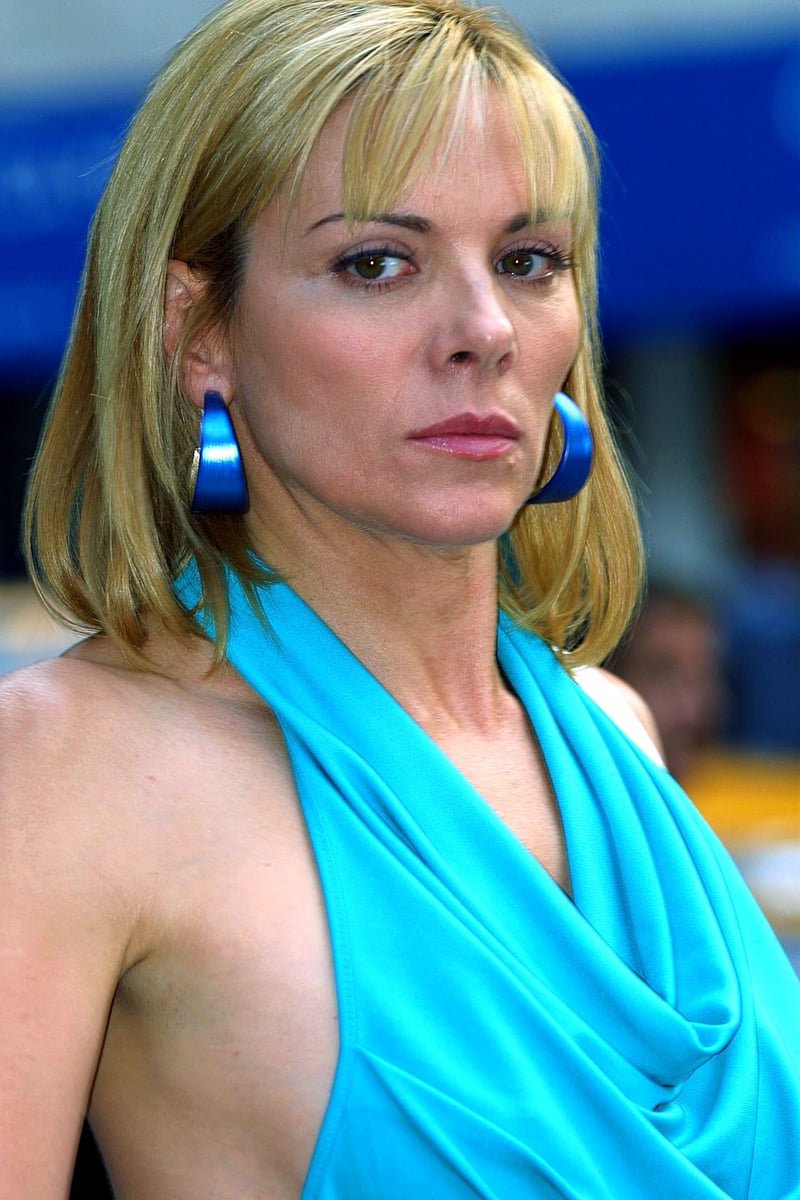 Kim Cattrall in Sex And The City. Image: Getty.

As viewers watching from home saw, Carrie and Samantha only ever corresponded over a text.

“We didn’t go to Kim for this, you know,” Parker explained. “After we didn’t do the movie and the studio couldn’t meet what she wanted to do, we have to hear her and listen to her and what was important to her. It didn’t fit into what was important or needed for us.

“There’s a very distinct line between Samantha and Kim,” Parker went on to say.

“Samantha’s not gone. Samantha’s present, and I think was handled with such respect and elegance. She wasn’t [vilified]. She was a human being who had feelings about a relationship, so I think we found a way to address it which was necessary and important for people that loved her.”

...Despite this though, the And Just Like That team is hoping she'll come back for season two.

Kim Cattrall has made her position on returning to the SATC franchise as clear as it gets, but writers aren't convinced just yet.

"We'll announce eventually that the show will have a second season," an insider told the Daily Mail.

"It will be quite a while between the first and second series as Sarah Jessica Parker has a busy schedule and we have a lot of work to do to get Kim Cattrall back.

"We all miss [her] and we hope she comes back for the second season – the door will never close on her, she is an important part of the franchise," they added.

Some scenes were faked to throw us off.

As mentioned, And Just Like That was long anticipated.

That's why the cast and production team tried to throw paps off with staged fake scenes that would distract from the real stuff.

Appearing on The Late Show with Stephen Colbert, Cynthia Nixon and Kristin Davis sheepishly explained that they might have done so when asked by the host.

"There are rumours that you guys actually shot fake scenes around New York to throw people off the scent," Colbert said.

"Yes. Yes, definitely," Davis replied quickly, before being interrupted by Nixon who said "absolutely not," before adding that "it might be true".

"We want the fans to enjoy the show, I think that's the important part." Davis said.

Aidan Shaw will be making an iconic return.. Maybe for season two?

Now that Big is out of the picture, it looks like Carrie's old fling, Aidan Shaw, will be making his return to the franchise.

“I’m going to do the show,” John Corbett told Page Six back in April.

However, now that we have reached the finale and there were no signs of our beloved Aiden, it seems like we will just have to wait for season two. 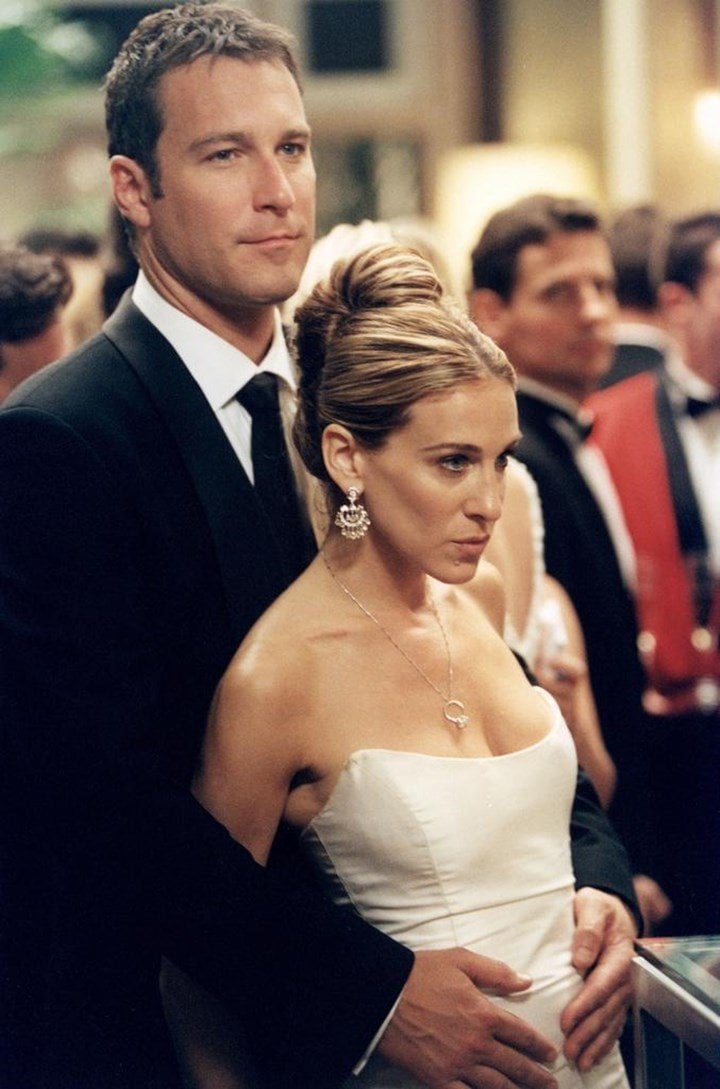 We're not one to speculate, but that certainly sounds like a relationship revival if we've ever seen one.

"Miranda’s journey is representing another reality out there, which a lot of people go through — the reevaluations and transitions in life," they said.

"Grown couples grow apart, and people come to epiphanies about what their spouse is or isn’t fulfilling for them. Miranda’s story was very representative of a certain path that a lot of women find themselves on."

...And yet none of that justifies being a shitty person to your partner. In real life, you don't get to cheat and then say, oh, sorry - I was going through some personal growth and revelations, so everyone should be cool with that.
N
nessie 6 months ago