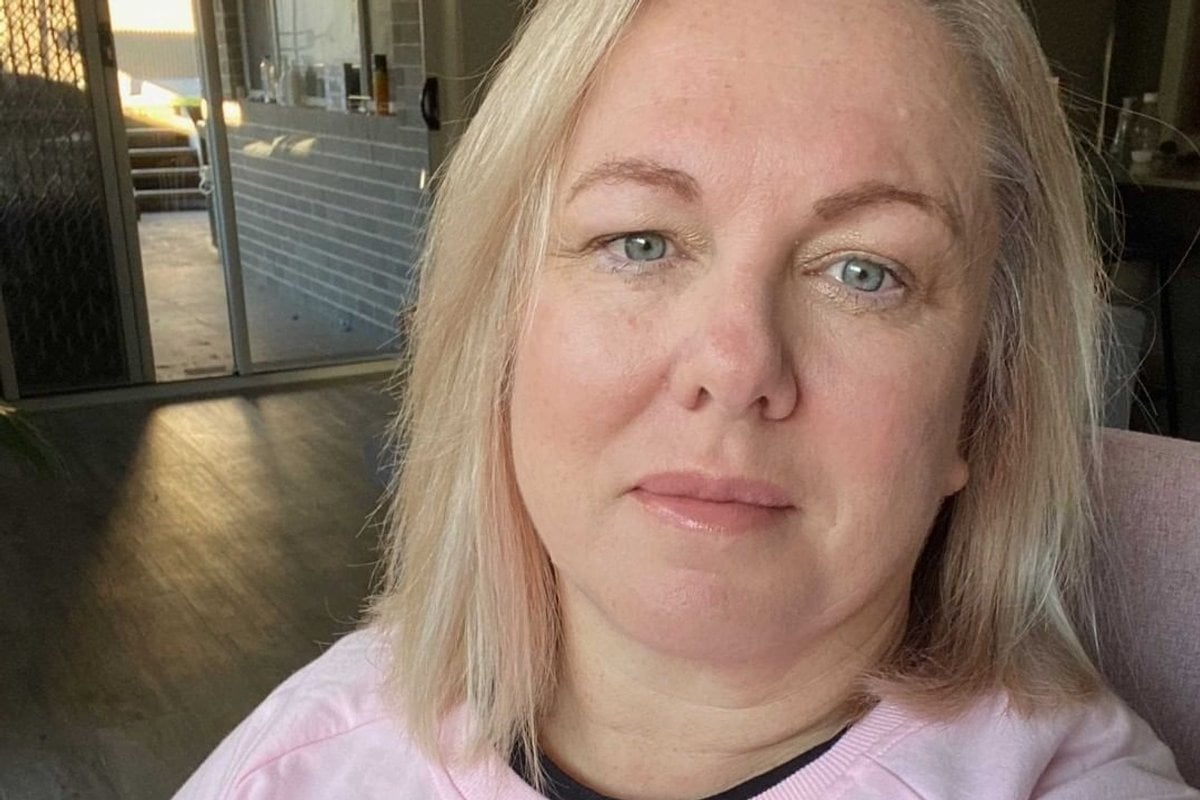 For many years, as a young woman, I saw myself everywhere in advertising, on TV shows, and on the front cover of magazines. But as I grew older and had children, that all changed.

By the time I was 40, the goalposts had shifted entirely. I felt like I had started to slip slowly into invisibility.

As my kids moved into their teenage years and became their own people, it seemed that the more visible to the world they became, the less room there was for me.

Watch: Deborah Hutton shares her advice for her five-year-old self. Post continues below.

I recently had an experience where I was quite literally overlooked by a retail worker. I was standing at the counter in a large chain store with something in my hands to purchase when the store assistant called the very attractive, much younger girl behind me forward to serve.

It was as though I wasn’t even standing there. Unfortunately, I was buying a gift for someone that was only available at that store, so I had to suffer the embarrassment of the store assistant saying, 'Oh, I didn’t see you there,' when they clearly saw me waiting there to be served.

The older I become, the less I see myself everywhere - especially in popular culture. It feels a lot like when we used to say to young girls that you can’t be what you can’t see.

Over the years, I have noticed this in advertising as well. Once upon a time, marketers were literally falling over themselves for my consumer dollars. But these days, unless I am in the market for incontinence products or Botox, it has all but disappeared. (Funnily enough though, I actually have significantly more disposable income to spend these days.)

Overall, it seems that society sees older men as powerful and distinguished. Their grey hair signifies experience and knowledge. They are celebrated for their life experience.

But on the other hand, women are actively encouraged to hide our greys, smooth out the wrinkles on our face, and cover up our ageing bodies. Older women who age "gracefully" or "naturally" (code for no obvious work done), such as Sarah Jessica Parker, are held up as beacons of difference, rather than everyone simply seeing ageing women as the norm. 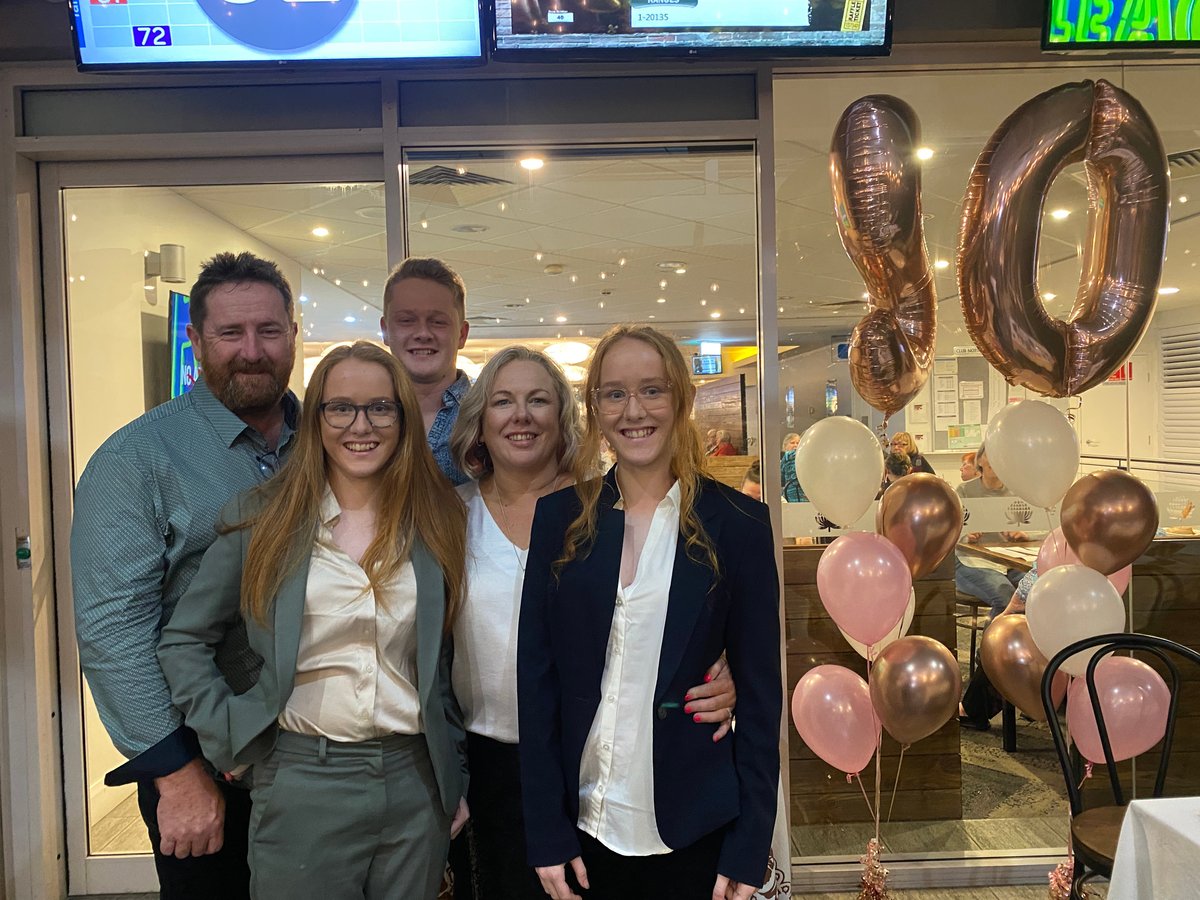 Cathy and her family. Image: Supplied.

I feel a sense of invisibility in my personal life too.

The less everyone else in my life needs me, the more invisible I have felt. I see this with older women I know as well. Our children no longer turn to us as the fount of all knowledge and wisdom or for approval. Instead, they seek that out with their friends and partners.

I have been a mother for over 20 years now and my identity has changed so much over that time. My children need me less and less in a physical or even emotional sense.

But even though I feel like I am invisible to society, I still carry the significant mental load of caring for my own children as well as my ageing parents as part of the sandwich generation. The juggle is actually getting harder, and the demands on me are greater from society, yet everywhere I look, I see myself less and less.

Likewise, I am trying to re-enter a job market that caters for youth and vitality. I cannot bring youth to any job that I apply for, but I can bring wisdom that only age and experience can give. And as much as I wish my body was my 20-year-old version, I don’t want to be 20 or even 30 again.

I have professional colleagues who feel very secure in their place at work and quite invisible in other aspects of life.

This can in part be because they have spent time building a career and perhaps were older mothers so they didn’t "fit" in the young mother’s group, or it can be because we as women generally feel less secure in ourselves. As we age, everything changes, and we are no longer the young, exciting model that advertising tells us we should be, and it's hard to make that mental shift.

There's another level of invisibility, too, in the health changes that come during this time period.

As I entered menopause, my body changed once again. Just like it did when I went from being a child into adolescence, and when becoming a mother.

Even these changes are meant to be invisible. We celebrate girls when they go into adolescence and start their periods, and the growing pregnant belly is fawned over. Yet talking about menopause or the changes that come with it still feels very much taboo. This adds to the invisibility of being an older woman.

It would seem turning 50, or perhaps the start of menopause, marks a woman’s third age. We seem to have very distinct stages in life. There's childhood and adolescence, adulthood and perhaps motherhood. But after that, well, you can just feel... invisible.

However, we should really recognise that we have a lot of power in our "mature" years.

My friends and I need to use our voices to be heard. We are not inconsequential and we need to let everyone know.

It is time that older women let everyone know that they will not go quietly, and ageing is nothing to be scared of.

We can do it gracefully, naturally, loudly and proudly, just not invisibly.

M
mb1111 a month ago
Reply
Upvote
I really feel that the author needs a big virtual hug. It is difficult adjusting to change in your family amd work life.  In particular when your body is going through its own changes.  Kids moving on should be celebrated though because you raised people, who are now independent as they should be. The most challenging bit in my mind is the job situation. This is not unique to women though.  Ageism in the workplace is a real thing.
C
cat a month ago
Reply
Upvote
I don't think the issue is really invisibility here, it's about a group of people who had privilege losing it. Young, white women are the face of capitalism. They're also the only people we see mourning invisibility when they get to middle age- because they're the only ones who were used to seeing themselves everywhere (except for middle aged men, who continue to see themselves everywhere forever). If we saw all races and identities and abilities represented in our media and politics this wouldn't be an issue.
I don't think visibility is the same as power though. I would argue that middle aged to older women are significantly more powerful than young women.  They have more money, are more conservative and therefore are courted by political parties. Age discrimination definitely exists at work but young women just face the bias that companies shouldn't bother with them because they will leave to have babies.

Besides, it was always the middle aged white men who controlled everything anyway. Young white women are granted an illusion of power because those men want to see them, but it was never really worth anything.
G
guest2 a month ago
Reply
Upvote
5 upvotes
@ cat.  How easy it is to dismiss an older woman's lived experience, or indeed what she is experiencing in her 50s and 60s as the loss of privilege.    Many older women gave up their careers (which was the done thing at the time) to raise a family, only to find themselves divorced, struggling financially and without a secure roof over their heads.   The attitude towards older women (and men) which results in them being discriminated  against in the workforce resonates throughout society.   Invisibility results in being ignored in shops, fashion directed towards the young, being told to 'dress age appropriate', medical problems written off as 'getting older', or 'menopause',. 'OK Boomer', 'Karen' are terms used to shut down women (and men).   As for middle aged, white men, unless they had a positions of power in their working life, too often find themselves relegated to the scrap heap as they age and have become their own trope 'white, stale and male'.
M
mb1111 a month ago
Reply
Upvote
1 upvotes
@cat Not all middle aged women are conservative and have more money than when they were younger.  Some never were visible in the media because their likeness did not fit whatever was fashionable at the time that they were young.
C
cat a month ago
Reply
Upvote
@mb1111 thats literally my point, that you can only feel "invisible" in your middle age if at some point you felt visible.
C
cat a month ago
Reply
Upvote
@guest2  No one is saying older women cant have financial/life/social issues, or that medical bias doesn't exist, you're wildly conflating issues . Those would be great things to focus on or write articles about. The point is to feel invisible you once had to feel visible, and white women are some of the few people in the world who ever get to feel visible. That visibility requires the majority of people to be invisible their whole lives.
"Old stale and male" is  a term that exists because those institutions still run everything. Similarly "Karen" specifically refers to a white woman who is using her power to drown out the voices of minority groups.  "OK Boomer" means the same. They're literally all tropes that exist because of the power middle aged and older white people wield in our society.
News
General
Opinion
True Crime
Politics
Sport
Explainer
Entertainment
Celebrity
Reality TV
Movies
TV
Books
Rogue
Royal
Lifestyle
Beauty
Fashion
Weddings
Home
Wellness
Health
Fitness
Travel
Food
Parents
Before The Bump
Pregnancy
Baby
Kids
Teens
School
Parent Opinion
Work & Money
Money
Finance
Career
Lady Startup
Relationships
Sex
Dating
Separation
Friendship
Family
Real Life
Couples